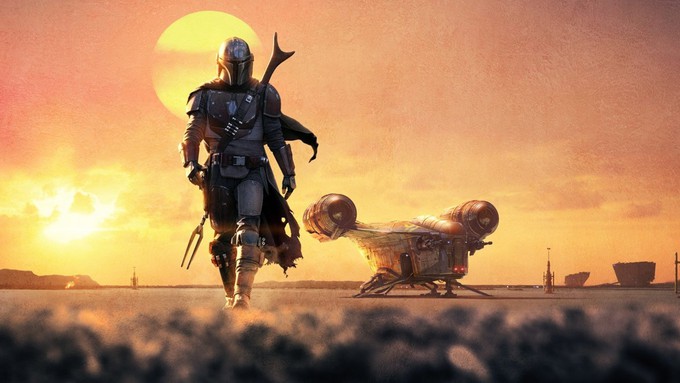 Read ekm’s assessment of THE RISE OF SKYWALKER here.

It’s genuinely surprising the way that THE MANDALORIAN turned into the Must See television show of the year; it was a program absolutely no one was talking about, and what little buzz surrounded it amounted to cautious optimism at best.  By the end of that first week, when Disney+ was both opening its doors and crashing the internet, THE MANDALORIAN had picked up where GAME OF THRONES left off, becoming a watercooler serial that you were either hip to, or completely missing out on.  While it’s tempting to say, Well, of course, because it’s STAR WARS, it can’t be overstated just how little anticipation there was for THE MANDALORIAN, rendering its literal overnight explosion an out-of-left-field thing.

Because come on, outside of the most dedicated members of the fan base, who really cares about CLONE WARS or REBELS?  The fact that both were animated certainly limited the potential audience, given the perception that these were kiddie shows.  Live-action presentation unquestionably gave THE MANDALORIAN a sense of legitimacy from the outset, particularly at a time when television is neither the second-fiddle platform it’s been traditionally known as, nor when impressive special effects and alien environments are no longer restricted to the silver screen.  One could argue that – in some ways, but certainly not all – STAR WARS is a franchise that’s been waiting for this precise delivery mechanism, given the serialized storytelling, and the need to explore outside the boundaries set by the Hero’s Journey motifs that devour two hours and twenty minutes in a single gulp.

And that’s THE MANDALORIAN in a nutshell.  It’s STAR WARS minus Space Wizards (sorta), destiny (kinda), and lightsabers (thus far).  It’s the first attempt to pick up where the original 1977 film left off, as the Arthurian elements are brushed aside in favor of the galactic Western motifs evident in Lucas’s initial outing.  Overarching storytelling is in abundance, albeit by way of episodic adventures that support, inform, or complicate the primary narrative.  It’s a journey into the shadows and corners of the STAR WARS universe, with an antihero subverting many of the Campbellian tropes, and an adorable sidekick to remind you that, yes, this is still a franchise retrofitted to sell toys.

But let’s step back for a moment and address that earlier point – namely, that THE MANDALORIAN is a Western.  We see it in multiple forms, be it the sandy locations, or the design of set pieces (Mando escapes a fray on the back of a covered wagon; Jawas watch his approach from Sandcrawler windows like outpost citizens awaiting a Main Street gunfight, etc.); even the score feels like the unholy love child of John William and Ennio Morriccone.*  It’s there in the cinematography, the execution of cantina sequences, and a plot point involving taming the off-world equivalent of a bucking Bronco.  If one needs further evidence (which surely they don’t), then just look to the title character, a literal Man With No Name.

While the Western motifs are the most obvious element on display, THE MANDALORIAN also draws freely from Kurosawa, whether in terms of iconography, or basic plotting.  There are traces of YOJIMBO in the series DNA, which may or may not be as readily visible as the outright repurposing of SEVEN SAMURAI for the fourth episode.  An alert reader will immediately shrug their shoulders in acknowledgment of these influences, as Lucas never made any secret of his sources for STAR WARS.  After all, these elements have always been a part of the series makeup, right?

Wrong.  If we’re going to be pedantic about it, only STAR WARS and THE PHANTOM MENACE can truly be identified as HIDDEN FORTRESS-derived; all other lifts appear in small bursts, such as the ROSHOMON-inspired flashbacks present in THE LAST JEDI.  Beginning with THE EMPIRE STRIKES BACK, the newly-minted STAR WARS “saga” became a Romance less concerned with Japanese and Sergio Leone pictures, and more obsessed with mythological archetypes.  Both EMPIRE and RETURN OF THE JEDI are quite different from STAR WARS (and indeed, with one another), while still feeling of a set.

This changed with the Prequels, and the transformation carried over to the Sequel Trilogy.  Gone were the days of pulling from Spaghetti Westerns and Mifune flicks; second and third-generation STAR WARS became a matter of referencing STAR WARS, and mining the Original Trilogy for callbacks and inspiration.  The argument that Lucas engaged in heavy-handed fan-pandering beginning with ATTACK OF THE CLONES is absolutely supported by this idea, as is the notion that Abrams and Johnson were more preoccupied with what had come before than injecting their respective Episodes with new takes on the films that had originally inspired the series’ creator.**  If STAR WARS as a theatrical series has become redundant, then THE MANDALORIAN is here to show you why those films continue to tread the same ground, and how to do something different with a franchise seemingly fixated on convincing you it has nothing left to say.

That isn’t to say there isn’t fan service.  THE MANDALORIAN is certainly (more) preoccupied with resurrecting aliens, locations, and sound bytes from the Original Trilogy than the ones that followed, but it’s also willing to lift (carefully) from the Prequels and SPECIAL EDITIONS.  These moments are generally unobtrusive: we get stuff like a Salacious Crumb cooking on a meat skewer in an outdoor market, and another in the series of Huttese-speaking door wardens seen at Jabba’s palace.  Then there are other sequences that feel as though all subtlety has been tossed aside, such as the fifth episode, which revisits Tatooine in a way that feels like at times like THE STAR WARS HOLIDAY SPECIAL.***  Whether this is catnip for the fans, the casual viewer, or a little of both, it’s hard to say (and not particularly important, in any case).  Thankfully, THE MANDALORIAN avoids the pitfall of walk-on Guest Stars from previous films, whether by way of terrifying CGI, or creepy cameos where older Players try to pick up ladies young enough to be their granddaughters.****  It’s the opposite, actually, as eagle-eyed viewers may find themselves noting a familiar spacecraft during the final moments of RISE OF SKYWALKER and wonder aloud at a certain unnamed Bounty Hunter’s ultimate fate.

If there’s one example of (potential) Lowest Common Denominator thinking, it’s the introduction of a character known social media-wide as “Baby Yoda.”  If ever there was a contender to the throne of Obnoxious Cute Character(s) Designed to Sell Toys (previously occupied by the Ewoks), it’s this one.*****  And yet!  Common sense and good taste would seem to dictate that this unbearably cute critter would Kiddify THE MANDALORIAN, or sweeten its A-plot obnoxious to the point of causing accidental tooth loss.  Baby Yoda does neither.  He’s adorable, and yet, shockingly, he isn’t distractingly adorable.  This may be the first time in STAR WARS history that a middle ground is so effectively trodden.

Even more impressive is the title character himself.  Pedro Pascal has taken the unenviable task of bringing dimension to a Boba Fett knockoff whose performance is effectively Mime art; unlike other actors who shall remain nameless for their insistence on the Spidey mask coming off during the Third Act of each film, Pascal embraces the perceived limitations.  His ability to convey attitude and emotion through body language transforms his near-monotone vocal delivery and expressionless mask into a Rorschach we can all easily interpret.  This is no small thing, as the entirety of THE MANDALORIAN features a lead character we never see, nor know anything about.

Some episodes are stronger than others, and yet none are disposable, or worthy of Fanboy ire.  THE MANDALORIAN is concerned with taking a nothing character like Boba Fett – who was made into an even bigger Nothing by his crass insertion into the Prequels – and allowing him to earn his cred.  If you’re someone like me who insists on watching laserdiscs or Despecialized versions of the Original Trilogy only, you’ll find that THE MANDALORIAN’s development of Bounty Hunter mythology informs the events of THE EMPIRE STRIKES BACK and RETURN OF THE JEDI; we now wonder who Fett is, what he’s experienced, and realize that he isn’t a “Bad Guy,” per se.  The acquisition and delivery of Han Solo is likely going toward saving displaced children, making Fett’s tenuous collaboration with Darth Vader a matter of playing the system to achieve a better end.  Once we accept ATTACK OF THE CLONES and its characterization of Jango & Sorta-Son, THE MANDALORIAN makes very little sense.  Given how entertaining it is – something few would say of the Prequels, at least by way of comparison to this new series – the decision to skip those three films and save money on therapy seems a prudent choice.

And when it comes down to it, THE MANDALORIAN is infinitely more satisfying for a STAR WARS fan than either trilogy to follow the first.  It adds without subtracting; it informs without rewriting.  Most importantly, it understands that in order to excite fans of a beloved property, a creative team should be pulling from the same materials that inspired the series in the first place, rather than simply Xeroxing a single movie over and over again.  If THE MANDALORIAN is any indication of Disney’s (television) agenda for the STAR WARS franchise, then THE RISE OF SKYWALKER may indeed be merely the end of redundancy rather than the overall saga.  Either way, we can all enjoy a libation to celebrate the closing of our shared narrative.

*And while it’s certainly a hummable score, I can’t be the only one who struggles to get past the disappointing similarity to the Rohan theme from THE TWO TOWERS.

**No, THE LAST JEDI does not attempt anything new, despite how obsessed it is with convincing you otherwise.  The only original idea executed by Rian Johnson is to handcuff whoever had to follow him.  It’s like Abrams painted a third of a room blue, and then handed the paintbrush to Johnson, who thought it would be hilarious to paint the next third brown.  Faced with an ugly as fuck set of walls, the only thing to do is break out the blue paint, cover the brown and pretend it wasn’t there in the first place.  And then what are you left with?  A fucking blue room.  No one wins.

***The HOLIDAY SPECIAL comparison isn’t limited to the Cheese Whiz manner in which environments are reused, minus the context for which they’re known; THE MANDALORIAN is also heavily populated by a variety of comic guest stars who are probably the last people you’d expect to see in this particular galaxy.  Brian Posehn, Horatio Sanz, Amy Sedaris, and Bill Burr aren’t that far a cry from Art Carney, Harvey Korman, and Bea Arthur, when you really think about it.

*****Like Baby Yoda, Wicket is never once named in RETURN OF THE JEDI, nor is the word “Ewok” ever spoken, and yet “Baby Yoda” and “Ewok” became overnight buzzwords.  Never underestimate the power of the Marketing Team.