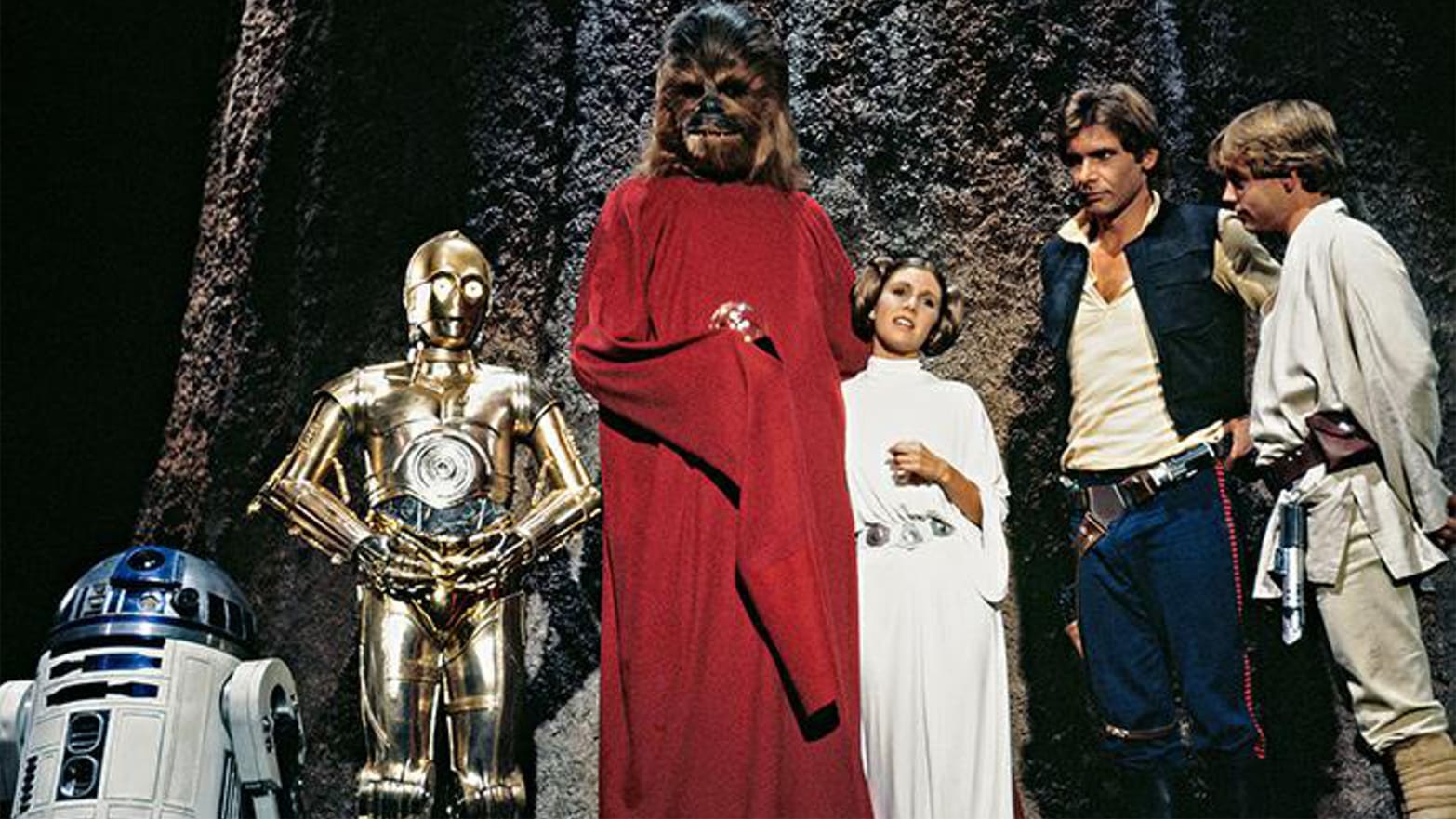 There was a strange and borderline masochistic ritual in the Myers house I’d like to tell you about, one that may or may not play a part in the current state of my marriage.  It hasn’t happened in a few years, but for a while, it was lovely.  On Christmas morning we’d wake up late (or as late as possible, given the three year-old who’d be up at dawn, scream-singing the STAR WARS fanfare in the bedroom beside us); my wife would make a proper English breakfast of fried eggs, beans, sausage, bacon, mushrooms, and toast, served with a piping mug of Darjeeling tea.  Then we’d all sit down in the living room, turn on the television, and watch that beloved seasonal film that kids of all ages enjoy the world over.

Yes!  Well, no…not anymore, anyway.  Not since I got married.

We watched THE STAR WAS HOLIDAY SPECIAL.

Yes, the infamous STAR WARS HOLIDAY SPECIAL.  In the days before YouTube, it was the stuff of legend.  Discussing it conjured images of mist-shrouded lakes and ethereal hands holding swords aloft.  It was like El Chupacabra or The Loch Ness Monster, as there were many who doubted it even existed.  I mean, how could it?  “So, it’s got Chewbacca trying to get home to Kazzook to celebrate a non-denominational, family-friendly un-holiday with his wife, Mala, his Dad, Itchy, and his son, Lumpy; and it’s got Bea Arthur singing a song in the Mos Eisley Cantina about Imperial occupation, Harvey Korman playing three separate characters -- one of whom hosts a cooking show -- and a scene where Chewbacca’s Dad jerks off to a holographic porn video.”  SHUT THE FUCK UP, KID IN THE COMIC STORE.  THAT’S NOT REAL!

Remember the video for Weird Al Yankovic’s “White and Nerdy”?  There’s that bit where, in super-vanilla Dork Mode, Al sidles up to a presumed drug dealer and slips him cash in exchange for a brown paper bag.  When he opens it, what do we see?  Crack?  Hee-rawn?  Nope: it’s a VHS copy of THE HOLIDAY SPECIAL.  He nerdgasms with joy.  When that music video hit the net, I had multiple friends forwarding it to me or posting it on my MySpace page.  LULZ 2 TRU ITS U ERIK.  The sad part is, they were right: that was me, and I did buy a bootleg of THE HOLIDAY SPECIAL.  The only difference is that there wasn’t a heavy hip-hop beat behind me; the soundtrack of my life during that moment was mouth-breathing accompanied by shame.  I remember the sudden inability to judge whether the fact that I was in my twenties rendered this long-sought-after acquisition a genuine accomplishment, or the signal that I needed to go back to college.  It’s worth noting that the first time I watched it was also the first time I drank an entire jug of Yellow Tail Shiraz all by myself like a Big Boy.  And I didn’t even throw up afterwards!  I did, however, go back to college.

The importance of THE HOLIDAY SPECIAL cannot be understated.  It premiered in the wake of STAR WARS, and a year and half before EMPIRE.  Keep in mind, that first movie was an unprecedented success, but sequels were an unknown quantity.  This was before STAR WARS was a franchise as we now understand it; it had yet to become a cultural staple as we know it today.  Looking at it from that perspective, you really have to wrap your head around the fact that, action figures and tie-in novels aside, this was the very first mainstream product to follow that original 1977 film.  Talk about playing with fire.

It really has to be seen to be believed.  Imagine an episode of DONNY & MARIE or the BRADY BUNCH VARIETY HOUR, featuring Mark Hamill in heavy coats of post-car accident makeup, a Carrie Fisher who’s so stoned that she literally almost trips and falls during her first scene…and The Jefferson Airplane.  Written, in part, by Bruce Vilanch.  Directed by Steve Binder, who also did Elvis Presley’s ’68 COMEBACK SPECIAL.  For realz.  This happened.  Hot tea?  Screw that! Where’s the bong…?

It sounds incredible, and it is; but the schizophrenic result is that it’s also incredibly boring.  Painfully so.  Yes, it’s amazing and jaw-dropping and a sight to be seen, but it’s undeniably the longest ninety-six minutes you’ll experience in your entire life.  My wife’s twenty-five-hour labor was shorter than this fucking thing.  You want to look away.  You can’t.  You want to go and do something fun, like grocery shopping or balancing the checkbook, or passing a kidney stone, but you’ve gotten this far: you’re committed.  That sound coming out of your mouth – is it a chuckle?  A moan?  A cry for help?  It’s all three.  You earn those belly laughs, believe me.  But they hurt.  They’re the equivalent of sit ups.

For Christ’s sake, the entire first act is performed completely in Wookie-speak.  We meet Chewie’s family.  Mom’s trying to make some food but she’s worried that Chewbacca has been captured by the Imperials who now occupy the Wookie home world; and Lumpy’s being an annoying little shit and getting on Grandpa’s nerves, because Itchy just wants to be left the fuck alone to read the newspaper, dammit.  Domestic drama!  In STAR WARS!  And it goes on like this for fifteen minutes without a single word of English being spoken.  It’s astounding.  It’s audacious.  And it goes from hilarious to inspiring to obnoxious throughout the course of a single scene.  It’s like the stages of grief swallowed together and shat out in unison, all inspired by a trio of Sasquatch living in a tree house.

But wait!  It gets crazier from there.  Bea Arthur and STAR WARS already sounds like a match made in Hell, but give her a showtune to sing to a roomful of drunken aliens and it becomes the soothing bedtime magic of an angry, diarrhetic warlock.  And speaking of the promise of the Tree of Life: Carrie Fisher signed on with the condition that she got to sing a song – and boy, does she.  She sings that song so hard that you can literally see Harrison Ford’s embarrassment.  This moment of public humiliation is only slightly less pronounced than in the scene where Han endures hugs and gooey sentiment with the Chewbacca family that would have made beach-racing Rocky Balboa and Apollo Creed uncomfortable.

This movie’s so Bad it passes So Bad It’s Good and goes straight to Unwatchable.  Carrie Fisher famously related that her only request for doing the STAR WARS TRILOGY DVD commentary track was a copy of the HOLIDAY SPECIAL, which Lucas has done all he can to suppress.  PRO TIP: Fisher used to put it on at parties when she wanted everyone to go home.

Thanks to the magic of the internet, you don’t have to be like me and track down a bootleg copy.  It’s readily available on YouTube for nerdy completists.*  Some versions even contain the original television commercials -- from a station here in Baltimore, no less -- that ran during the 1978 premiere; from this, all copies have been sourced.  The next time you hear nerds reference fighting the frizzies with a nudge-nudge wink-wink, you’ll get the joke, and immediately shower afterward.  Points to anyone who realizes that’s a dual-layered joke.

None of these reasons.  For as Princess Leia says:

“This holiday is yours, but we all share with you the hope that this day brings us closer to freedom, and to harmony, and to peace.  No matter how different we appear, we're all the same in our struggle against the powers of evil and darkness.  I hope that this day will always be a day of joy in which we can reconfirm our dedication and our courage.  And more than anything else, our love for one another.  This is the promise of the Tree of Life."

*Everyone loves to pretend the Boba Fett cartoon in the middle of the show is important because it’s the character’s first appearance, but aside from the fact that the animation looks like bad HEAVY METAL, the only remotely interesting aspect -- in retrospect -- is the uncanny likeness Han Solo bears to Adam Driver.