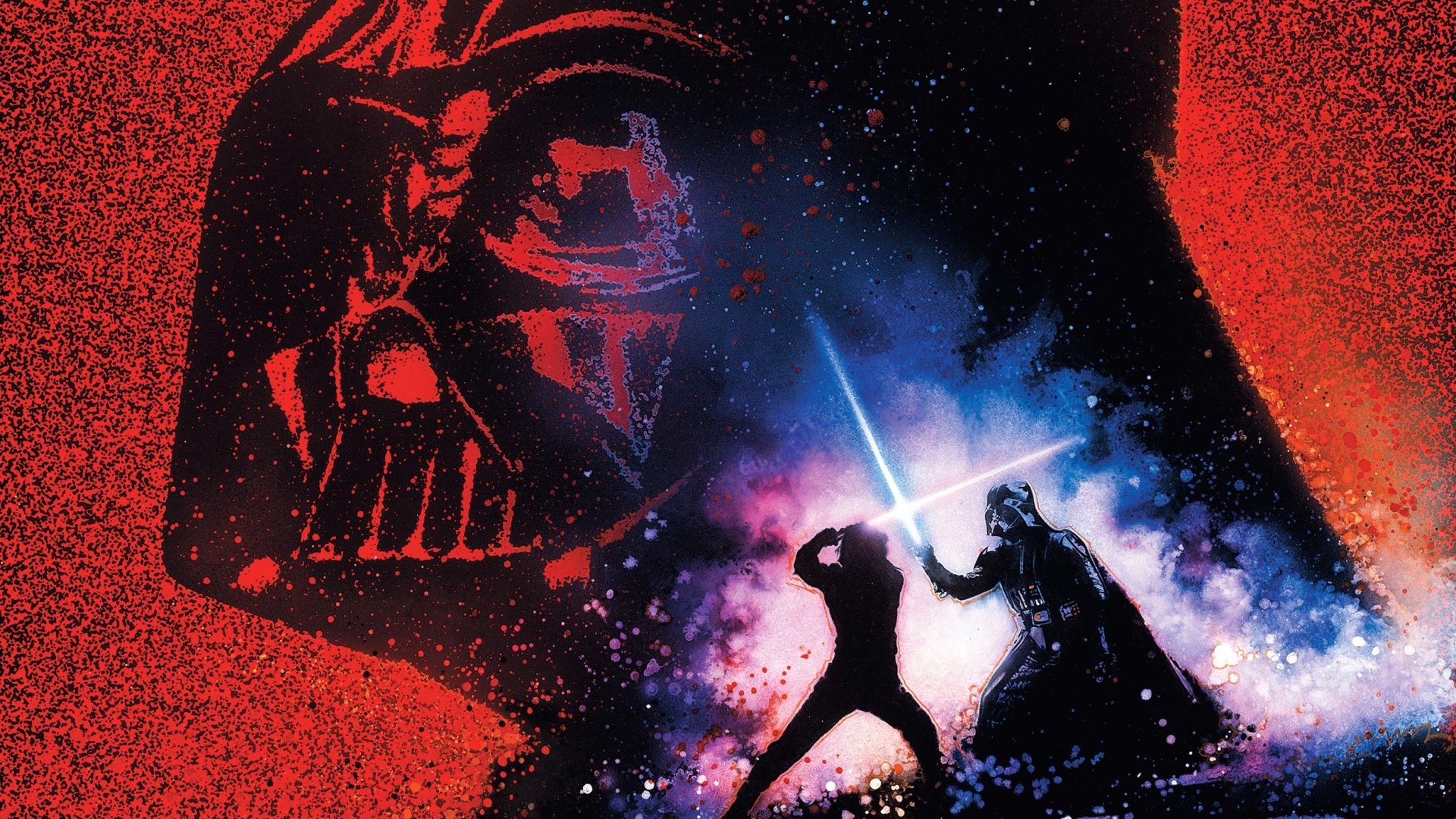 RETURN OF THE JEDI was an important object lesson for many of us back in 1983.  Until that point, George Lucas seemed infallible, and the STAR WARS trilogy was clearly charging toward a conclusion that would shatter expectations and redefine mythic storytelling.  Playgrounds were the early internet chat rooms, and the excitement was reaching fever pitch.  After EMPIRE, all bets were off.  Anything could happen.  SERIOUSLY: ANYTHING COULD HAPPEN, GUYS…!ANYTHING!

And then we saw the movie.

And then we walked out of the movie.

And then we realized there was such a thing as A Missed Opportunity for Greatness.

Look, I’m not a JEDI hater.  I don’t even casually dislike the film.  There’s a lot to love in this movie, and when it works, it works so well that it (kind of) makes up for the stuff that doesn’t, but I don’t think we need to sit here and pretend it’s the wrap-up we were all promised.  Setting aside all the legends that have sprung up around the film about what was originally planned (much of which comes from a very biased Gary Kurtz), it’s obviously a Should-Have movie.  Han should have died in self-sacrifice.  The Rebels should have waged a desperate, final attack on the Imperial home world.  The Falcon should have been destroyed.  “The Other” should have been someone – anyone – other than Princess Leia.  Darth Vader should have been plotting to overthrow the Emperor.  The Ewoks should have been Wookies.  David Lynch or Steven Spielberg should have directed.  Should-have, should-have, should-have.  On and on, ad infinitum.

We all know the complaints: it was too watered-down, too commercial-minded, too “toyetic.”  These are valid arguments. J.W. Rinzler’s book on the making of JEDI pulls back the curtain to reveal a George Lucas who was terrified of losing control due to cost overruns (as he nearly had on EMPIRE), and whose twelve (or nine? or six?) episode series was being hastily wrapped up amidst adoption and divorce.  He just wanted to get it over with.  Collaborator Gary Kurtz was dropped, and Larry Kasdan’s more aggressive story suggestions (i.e., Luke turns to the Dark Side and/or dies, et al.) were set aside for concepts far less expensive and more easily managed.

And it shows.  JEDI is vanilla.  Oh, hey, look, there’s another Death Star.  Another trip to Tattooine.  Hell, if you sit down and connect the dots, JEDI feels suspiciously like a remake of STAR WARS at times.  This isn’t surprising.  Lucas was so unhappy with how the first film turned out that he’d later vomit computer generated bullshit all over it again and again until each successive change made it resemble Michael Jackson, circa 2009.  I’m not just talking appearance-wise, either; the entire tone of STAR WARS ’77 was changed with these additions (and in some cases, subtractions), and it dates back to 1983, following, among other things, contemporary criticism that EMPIRE was kind of scary and depressing.

The tonal shift began with JEDI – the “cuteness,” and the aggressive, family-friendly aura that was so far removed from the swagger of STAR WARS and the near-traumatic aspects of EMPIRE’s best moments.  It was New Wave Punk, as performed on KIDS INCORPORATED.  While JEDI was once considered an aberration in the franchise, hindsight would ultimately reveal it to be an insidious omen of things to come.  If one requires further evidence, look no further than the Ewoks, who became a household name in the early ‘80s despite the fact that the word “Ewok” is never once spoken in the entire film.  By Lucas’s own admission, he wanted his daughter Amanda to have a teddy bear, and so the story was constructed in order to fulfill the needs of the demand.  One needn’t dig too deep to learn that even the folks at ILM were horrified by these new characters and what they represented.

This cutesiness is everywhere.  Even Jabba’s palace – which, along with two thirds of the film’s three-pronged climax – is bizarre in its tonal schizophrenia.  On the one hand it seeks to outdo the Cantina sequence from STAR WARS, and show our heroes in real peril; on the other, it’s filled with obvious puppets (the Max Rebo Band) and obnoxious, overused critters like Salacious Crumb.  A little bit goes along way with these sorts of characters, because they begin to wilt and stink when they spend too much time in the spotlight.  Jabba himself is supremely impressive as both a practical effect and as a menace, but the parade of alien gumdrops dancing around him, all vying for camera time, is enough to give one a toothache.

Or a headache, if we’re referring to the plan to rescue Han Solo.  None of it makes sense in terms of who is there when, or why.  The semi-official word is that JEDI takes place six months after EMPIRE, so the question of what Luke, Leia, Lando, and Chewie have been up to during the interim goes unexplained.  When last we saw Calrissian, he and his borrowed vest were off to chase Boba Fett in a straight line to a known destination.  Strangely, nothing seems to have happened during all that time.  But hey, let’s not even talk about the poor military strategy in allowing a key leader in the Rebel Alliance, along with the only Jedi Knight on the docket, to take off on a suicide mission involving the rescue of one unreliable pilot.  Apparently no one thought of sending a team of dispensable covert ops, or even just parking a few cruisers in front of Jabba’s palace with cannons hot.  But, hey: friends.

Once we hit the sail barge battle, we’re racing along, and it’s a blast.  And really, for all these nitpicks, that’s all they really are, because I’m having fun, I’m entertained, and that’s the whole point of a STAR WARS movie.  The same can be said for the Third Act, where we’re treated to what still remains the greatest space battle of all time, and an emotionally and thematically resonant face-off between father and son.  It’s the middle where JEDI becomes a formless, shapeless bag of wet shit, but even that’s mostly held up and kept from leaking by the cinematic adrenaline rush of the speeder bike chase.

It’s STAR WARS.  It’s clearly lesser STAR WARS, and feels like we’ve taken two steps back, whereas EMPIRE was a giant leap forward; but the cast is there, and we care about them.  There’s the iconography, and the music, and the feeling of impending resolution.  We like these people, and we like this galaxy, so yeah: JEDI coasts on goodwill, and whether that’s a good or a bad thing is largely dependent on – wait for it – a certain point of view.

The stuff that sucks, sucks hard.  Even as a kid, I never bought the idea that Luke and Leia were twins, and Alec Guinness looks mortified trying to make Obi-Wan’s dodgy exposition dump work on any level, whatsoever.  Even the final three-way confrontation between Luke, Vader, and the Emperor manages to reduce the hitherto growing complexities of The Force into shockingly simplistic terms a four-year old can understand:  Get mad, and you’ll be evil forever!  Even  Darth Vader is given a Get Out of Jail Free card, as he manages to weasel his way out of paying for his crimes (presumably to spare small children from asking Mommy and Daddy why Space Hitler was sent to Jedi Hell for killing billions with his planet killer).  Anakin’s “confession” isn’t really a confession at all; he never says he’s sorry, and he never acknowledges the people he’s hurt.  Instead, he just gives Luke a smug Told ya so! to relate to his estranged daughter (whom he tortured) in reference to his ability to stop fucking murdering his employees.  Taken on that level, JEDI might actually be more complex than I thought.

But with all that being said, and with all nitpicks (or outright complaints) set aside, there’s one thing I can clearly remember from that Saturday morning in May of 1983 when my Dad took me to stand in line to see RETURN OF THE JEDI: and it’s the moment when Darth Vader – filled with silent conflict – watches his son writhing in agony on the floor, begging for his father to help him; and then, as the music swells, he turns to lift the Emperor over his head, casting him into the pit; and I remember the crowd rising to their feet as one and cheering, and doing so myself, laughing and crying and clapping and being swept up in the pure magic of storytelling.

When RETURN OF THE JEDI works, it works.  When it doesn’t, we wait for the stuff that does.

NOTE: During preparation of this article, the news of Peter Mayhew’s passing was released to the public.  My sincerest condolences go out to his loved ones, and I hope that he and Carrie are finally getting that hug in a galaxy far, far away. 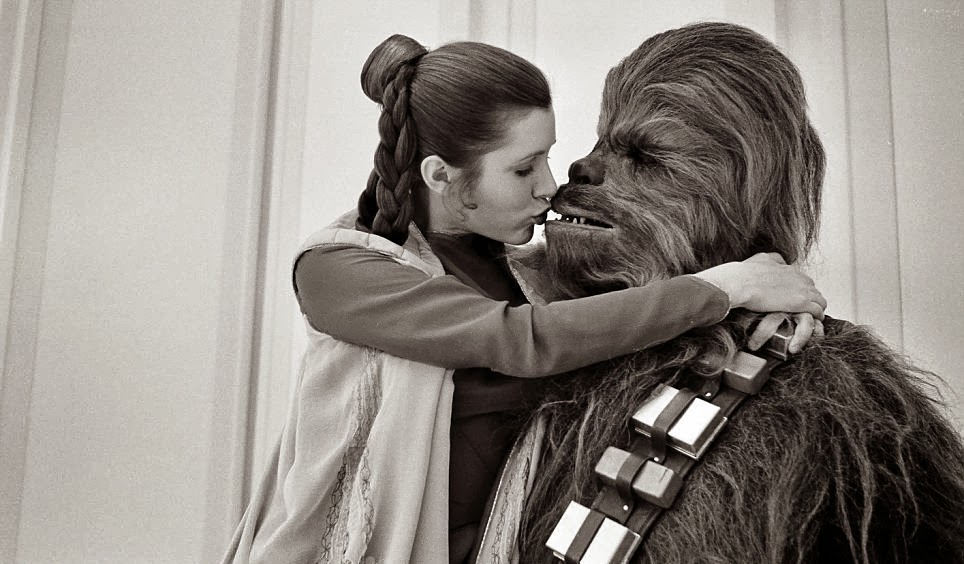