There were three key events we all expected to see in the STAR WARS Prequel Trilogy: the transformation of the Republic into the Empire; the origin story for Darth Vader; and the foggiest and least-known element of the backstory, the Clone Wars. 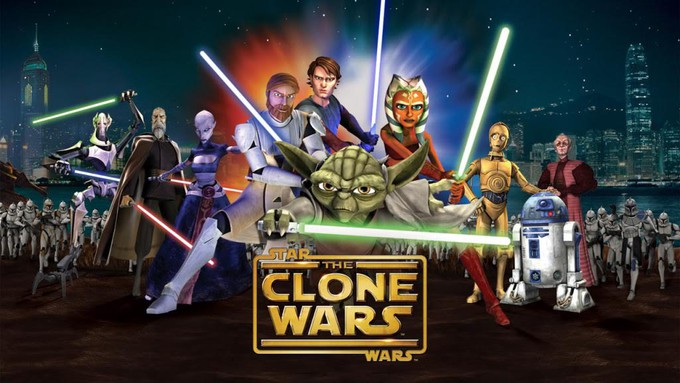 Like many elements contained within the Prequel narrative, the Clone Wars were the subject of intense discussion during the release of STAR WARS, EMPIRE, and JEDI, with much of what later became accepted lore derived from interviews with George Lucas.  The only thing we knew for sure was that Obi-Wan was involved; he acknowledges this during the only onscreen conversation related to this mysterious event.  Beyond that, it became "known," via the bits and pieces Lucas casually dished out, that Mandalorian "shock troopers" were involved, inferring the involvement of fan favorite Boba Fett, as well as the fact that this conflict would ultimately result in the fall of the Old Republic.  Thus, it was assumed that the Clone Wars would become the narrative through line along which the character events would be hung, much the same way Luke's story was told within the greater framework of a rebellion against the Empire.  Makes sense, right?

THE PHANTOM MENACE crippled this notion right from the literal beginning.  By spending the first third of the trilogy telling a story that was more or less a prologue, CLONES and SITH had little time to introduce, tell, and resolve such a sweeping series of events.  The result was a war that begins in the final act of the second film and ends in the first act of the third...meaning that nearly all of it happens off-screen.

Was this because the Clone Wars really weren't all that important beyond the end result (i.e., Palpatine becomes Emperor and establishes the Empire)?  Or because of poor planning?  Or was it intentionally reserved as a means for expanding the franchise brand to television?

Intentionally or no, the answer to that final question is Yes.  The time period between ATTACK OF THE CLONES and REVENGE OF THE SITH became the subject of not one but two separate animated series, both titled CLONE WARS.  Prequel fans enthusiastically embraced the two shows; cynics declared them shallow cash-ins.  Regardless of one's personal bias, both programs had obstacles -- some of which were identical, and others that were specific to the period during which they were broadcast, respectively.

The 2003 CLONE WARS ran during the time in which the series itself took place: between ATTACK OF THE CLONES and REVENGE OF THE SITH.  The series was traditional hand-drawn animation from SAMURAI JACK guru Genndy Tartokovsky, and ran on the Cartoon Network in three-minute installments (!) premiering on Friday nights.  The vast majority of these mini-sodes were combat sequences, each focusing on a different Jedi (Obi-Wan, Yoda, and new characters Kit Fisto, et al.), all battling foes on planets that were new to the STAR WARS universe.  Eventually, a bit more plot was introduced, and by the second season the episodes were running longer; but unless watched in bulk, CLONE WARS was typically over as soon as it began, and offered very little but action beats.

The brevity of each episode worked to its advantage in one way only: the inability to tell more than a cursory story prevented the series from hitting a dead end the way the Marvel comics had between each film in the Original Trilogy.  When trying to tell stories that don't conflict with films yet unmade, the storytellers are handcuffed, and the characters and scenarios are effectively hobbled.  There can be no progression of events or disruption of the status quo, resulting in a product that's completely inconsequential filler.

The 2008 computer animated CLONE WARS program was the product of a new creative team, telling traditional half-hour stories that benefited from hindsight (as REVENGE OF THE SITH had already premiered three years previous).  Though there were standalone episodes, CLONE WARS also offered mini-arcs, with adventures spread out over several segmented hours.  The pilot --consisting of the first batch of episodes -- was released theatrically, resulting in the lowest-grossing STAR WARS film to date, and one that was viciously attacked by critics and audiences alike.  Introducing a Truman Capote-style Hutt was considered the nadir of Lucasfilm's output.

Like its predecessor, the second CLONE WARS series had the issue of being unable to initiate substantial change given a known conclusion.  The difference here was that because SITH could be factored into the writing process, stories were designed to foreshadow events depicted in the film; but both of the CLONE WARS programs were hampered the same way that the Prequels were in that we already knew the ending.  How can you ever create suspense if we know our heroes survive?  In some cases, continuity errors were introduced, such as when Anakin is given a Padawan named Ashoka (despite being denied the rank of "Master" is depicted as a key component in his subsequent corruption); and Ashoka's unexplained disappearance from the following film was left to a later series, REBELS, to attempt to explain.  This is a major source of contention: the habit STAR WARS has developed of leaving seemingly important plot points to tie-in novels and cartoons to resolve.

The undeniable problem shared by both incarnations of CLONE WARS, aside from narrative inertia, is that it's a conflict that is ultimately rendered meaningless by virtue of the greater story being told in the films.  According to the Prequels, the entire thing is a sham initiated by Palpatine to misdirect his foes.  He controls both sides -- Separatists and Republic -- and the troops consist of mass-produced battle droids and mass-produced clones.  None of it means anything.  The losses are impersonal, being that they're little more than chips on a game board in a game of RISK.

I think we all expected the clones to be an outside threat (seriously, the title of the second Prequel ought to be ATTACK OF THE GOOD GUYS).  None of us anticipated the long-rumored Mandalorian shock troopers to be Boba Fett clones with newly-acquired Kiwi accents.  Personally, I always thought the Jedi would be fighting clones of themselves -- after all, Obi-Wan could be interpreted as a phonetic rendering of OB1, right?  Even the contradictory agendas of Senator Palpantine and Darth Sidious in THE PHANTOM MENACE ("Sign the treaty!" "Stay and Coruscant -- don't sign the treaty!") caused me to hope we might get a shock and learn that Sidious was an evil, Force-using clone.  No such luck.  Whatever one’s personal interpretation of a throwaway line about a war fought between identical versions of something/someone, there had been room to inform the drama and conflict involving characters like Anakin Skywalker (who might be forced to battle a less noble version of himself, and learn something along the way?).  Yeah, yeah:  Head Canon.

What we got was from this long-awaited epic event was a scenario without consequence, lacking importance or even content, relegated to cartoons told by outside writers.  Had the ongoing Clone Wars been used as the backdrop for the story of Anakin Skywalker, one can't help but imagine the roller coaster that might have been.