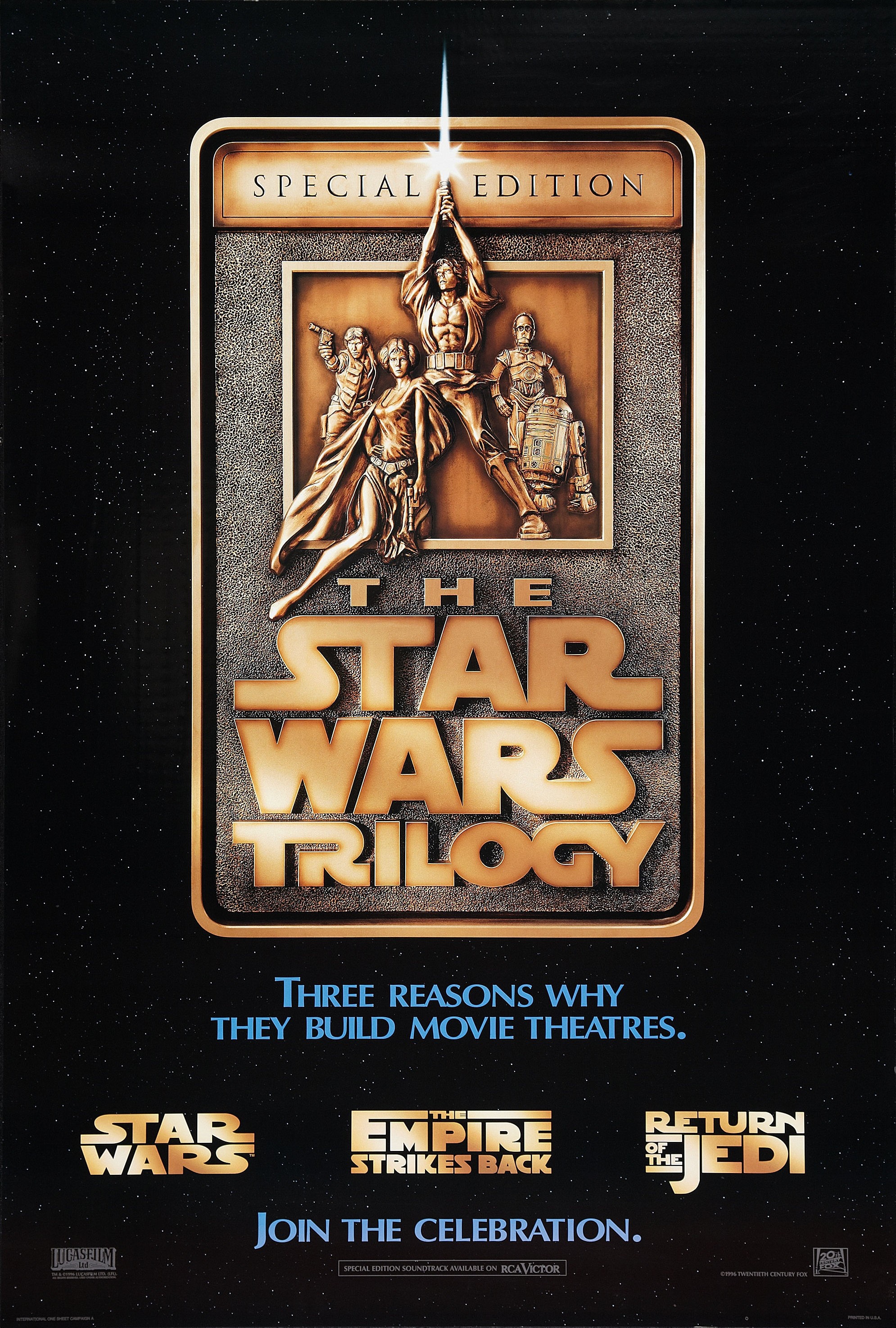 Let’s get this out of the way, because we have to talk about it sometime.  Read carefully.  I assure you, I'm going somewhere with this.  Somewhere dark.  Somewhere horrible.  Someplace where clowns are monsters, and your Kindergarten teacher wants to keep you after school so she can sink her fangs into your armpit and drink the blood straight from your slowly dying heart.  It’s a place where childhood ends and the screaming begins.

So in late 1994, the STAR WARS trilogy was re-released on home video for the umpteenth time.  These were the THX remasters with the “face” covers (Vader on STAR WARS, a Stormtrooper on EMPIRE, and Yoda on JEDI).  Ugly covers, but great sets.  It was even released in a then-newfangled VHS widescreen format (as it had in 1992 for the Definitive Collection).  I own this particular set in its 2.35:1-shaped collector’s case.  Little did I know at the time how valuable this would become, particularly as the cropped pan and scan versions were the ones you found in stores; widescreen had to be special ordered.  Clearly, this was another time.

But there was something troubling about this particular edition.  Something that set off minor alarm bells at the time.  Written on the back of the box, and also voiced in every commercial, was the invitation to own the STAR WARS trilogy…”ONE.  LAST.  TIME.”  Pardon my fucking language, but it was strangely ominous.

Then we started hearing rumors that the trilogy was being re-released for the twentieth anniversary.  Theatrically, no less!  Soon this was confirmed, but with news that was entirely unexpected: it seemed that beginning in January of 1997, all three films would appear in the theaters for a limited run – featuring new scenes, and new, state-of-the-art digital effects!  There was a tremor in the Force, albeit a weak one.  I mean, how cool was this?  They were finally putting Jabba the Hutt back into STAR WARS, and using JURASSIC PARK technology to animate him!  Biggs Darklighter would finally show up!  Plus all sorts of new stuff!  They were going to make R2-D2 blue in the X-Wing cockpit scenes, and the snowspeeder dashboards wouldn’t be transparent, and blah blah blah, so on and so forth.  This was cool, right…?

My first premonition of doom came when I saw an IMAX film at the Baltimore Science Center sometime in late ’96, just before the SPECIAL EDITIONS were released.  The thirty-minute short was on the history of movie effects, spanning KING KONG to the now-twilight of the twentieth century.  STAR WARS not only entered the discussion, but dominated the majority of the documentary’s run time, turning quickly into an advertisement for the computer generated wonders ILM was now capable of achieving.  In fact, much to my shock and near heart failure, they began showing SPECIAL EDITION footage, detailing its creation.

And that was my first look at Jabba.  At first I thought we were seeing a work-in-progress; to my growing horror, I realized we were not.  Even by 1997 standards, the work was bad.  Jabba was completely, totally, and uniquely wrong.  He was too small.  His eyes didn’t seem to fit his face.  His mouth had a strange Dorito shape.  This was the future of special effects…?  I distinctly remember feeling a cramp in my stomach.

But the real issue came next.  Apparently, George Lucas was righting all the wrongs of the original film, and had decided that the stationary Dewback – glimpsed distantly in the background as the Stormtroopers searched the escape pod on Tattooine -- somehow compromised the narrative of the scene.  Or something.  But rather than simply inserting an animated creature into the pre-existing footage, Lucas had sent a camera crew on location to capture new footage of actors in Stormtrooper armor, while bluescreen-garbed worker bees were busy sweeping the sandy surface over which a giant, swishing, reptilian tail could later be inserted.  For me, this was too much.  It was already questionable to alter the film so drastically while still coloring inside the lines; but creating new material from scratch?  Actually going out and filming it for the express purpose of adding a fucking dinosaur?  It was weird and troubling.

But just like everyone else, I got caught up in the hype come January.  It was STAR WARS!  On the big screen!  I even went to see fucking STAR TREK: FIRST CONTACT just to see the SPECIAL EDITION trailer, and did everything I could to pretend that shot of the Jawa falling off the Ronto and screaming “OO-TEENIE!” didn’t bother me for its cutesy, nauseating quality.  And yeah, I was there for the first showing of all three SPECIAL EDITIONS.  I brought my lightsaber (green).  I cheered at the old stuff, and gasped at the new stuff.  I loved it.  You probably did, too.

Hey, there’s no shame in admitting that.  Some of the “fixes” – in particular, the removal of matte lines and the general tidying of now-archaic effects work – were great.  Witnessing new scenes in films I could recite from memory was like finding treasure on the beach.  Even the stupid shit -- “Jedi Rocks,” I’m looking RIGHT THE FUCK AT YOU -- was harmless.  Why make a big deal out of it?  We were getting a “Special Edition,” a Bizzarro cut of the trilogy.  It was an alternate thing to check out, and weigh against the classic versions.  If you didn’t like it, don’t watch it.  It didn’t really “count.”  I mean, it wasn’t like the SPECIAL EDITIONS were replacing the original films, right?  RIGHT…???

And holy shit, that’s where it gets tricky.

First, the SPECIAL EDITIONS got a big VHS rollout that fall.  Yes, I bought the big leather-bound collector’s set.  You know, the one with the lobby cards, and the heavy, lead SPECIAL EDITION logo paperweight that can also be used to destroy VHS tapes once the disillusionment sets in?  That one, exactly.  It went right there on the shelf next to my THX set and earlier editions, and other collectible STAR WARS crap.  Pretty cool, right?  And it was -- at least until the next rollout of the SPECIAL EDITIONS…the ones with the “SPECIAL EDITION” logo now mysteriously removed from the cover art.  Huh?  What’s this all about...?

And then Lucasfilm gave us our answer: they were no longer the SPECIAL EDITIONS – they were the only editions.  Remember that warning to buy the set in 1994 ONE.  LAST.  TIME?  “We sure hope you were paying attention!”  It seems that now, as far as Lucas was concerned, the original films were “rough drafts,” and he personally guaranteed that they’d never be released again.  Ever.  Period.  Enjoy those degradable standard definition videotapes in our current digital age, boys and girls.

And that was the beginning of the end for many STAR WARS fans.  The end of a love affair with The Creator, and a souring on the series that would hilariously culminate with (sincere) cries of “George Lucas raped my childhood.”  It probably sounds inconsequential to casual fans, but it set a very dangerous precedent.  No other filmmaker in the history of cinema has withheld content in the way that Lucas has chosen to do.  All sorts of issues are raised about ownership and the historical importance of art.  Lucas himself testified before Congress in the late 1980s, deploring Ted Turner’s colorization of classic films, and advocating the preservation of film.  For him to deface his own work and then choose to withhold the originals is willful hypocrisy, and a whole lot of bullshit.

On top of this, he made further changes to the films: first in 2004 for the DVD release of the trilogy, and again for the 2011 Blu Ray versions.  Each series of alterations were designed to bring STAR WARS, EMPIRE and JEDI closer in tone and appearance to the Prequels, and in many cases attempted to retrofit continuity changes made by the latter three films.  “Oh, so you didn’t like Hayden Christensen as Anakin and you only want to watch the Original Trilogy?  Fuck you!  We digitally grafted his head onto Sebastian Shaw’s body at the Ewok party!  Try showing your kids the series without the Prequels NOW, asshole!” In many cases, these changes caused unintended continuity errors, such as Boba Fett’s newly-minted Kiwi accent being conspicuously absent from latter-day Stormtroopers, or Darth Vader’s unnecessary point-by-point departure from Bespin (thus creating the question of how he managed to beat the Millennium Falcon into space).  There’s plenty of Dumb on display here.  Meanwhile, the greatest irony of all is how 1997’s state-of-the-art CG continues to age more rapidly than the practical effects in the original films; they now look more dated as a result.

Ironically, the fans have chosen to preserve his original vision for him.  Through digital cleanup of the 1992 and 1994 laserdiscs, as well as Lucasfilm-sanctioned non-anamorphic laserdisc ports (dumped grudgingly onto a 2006 DVD re-release as a “bonus feature”), STAR WARS fans across the globe have lovingly crafted their own unaltered DVD and Blu Ray sets.  As consumer editing software advances, and as private collectors allow their 35mm prints to be digitized, the bootleg market thrives.  Purists seek to reproduce the Original Trilogy the way they remember it, along with cover art that -- unlike the official product -- doesn’t look designed to piss off the obsessive compulsive fans who are nonetheless powerless not to purchase it.  They can bitch on message boards, after all.

I myself have collected these bootleg editions since around the time ATTACK OF THE GOOD GUYS was released.  I own multiple DVD versions authored by numerous fans, each one a step up in quality.  Nonetheless, to watch the STAR WARS trilogy in its original, unmolested form is still an exercise in compromise: the audio and video can never be more than the source material allows.  The insult to injury is that gorgeous hi-def version on your shelf that requires you to watch Han Solo dodging Greedo’s laserblast from two feet away, and Jar-Jar screaming Wee-sah freeee! at the end of JEDI.

With Disney’s recent acquisition of Fox – who owned STAR WARS ’77 in perpetuity – there’s nothing left to prevent a release of the original editions except for one troubling factor: consumer demand.  An entire generation has grown up on the SPECIAL EDITIONS; some older fans have thrown up their hands in defeat and simply embraced them, because it’s better to love a thing you love than to hate a thing you love.  In this way, the films that changed the world in 1977, 1980, and 1983, respectively, may vanish in the digital blink of an Ewok’s eye.