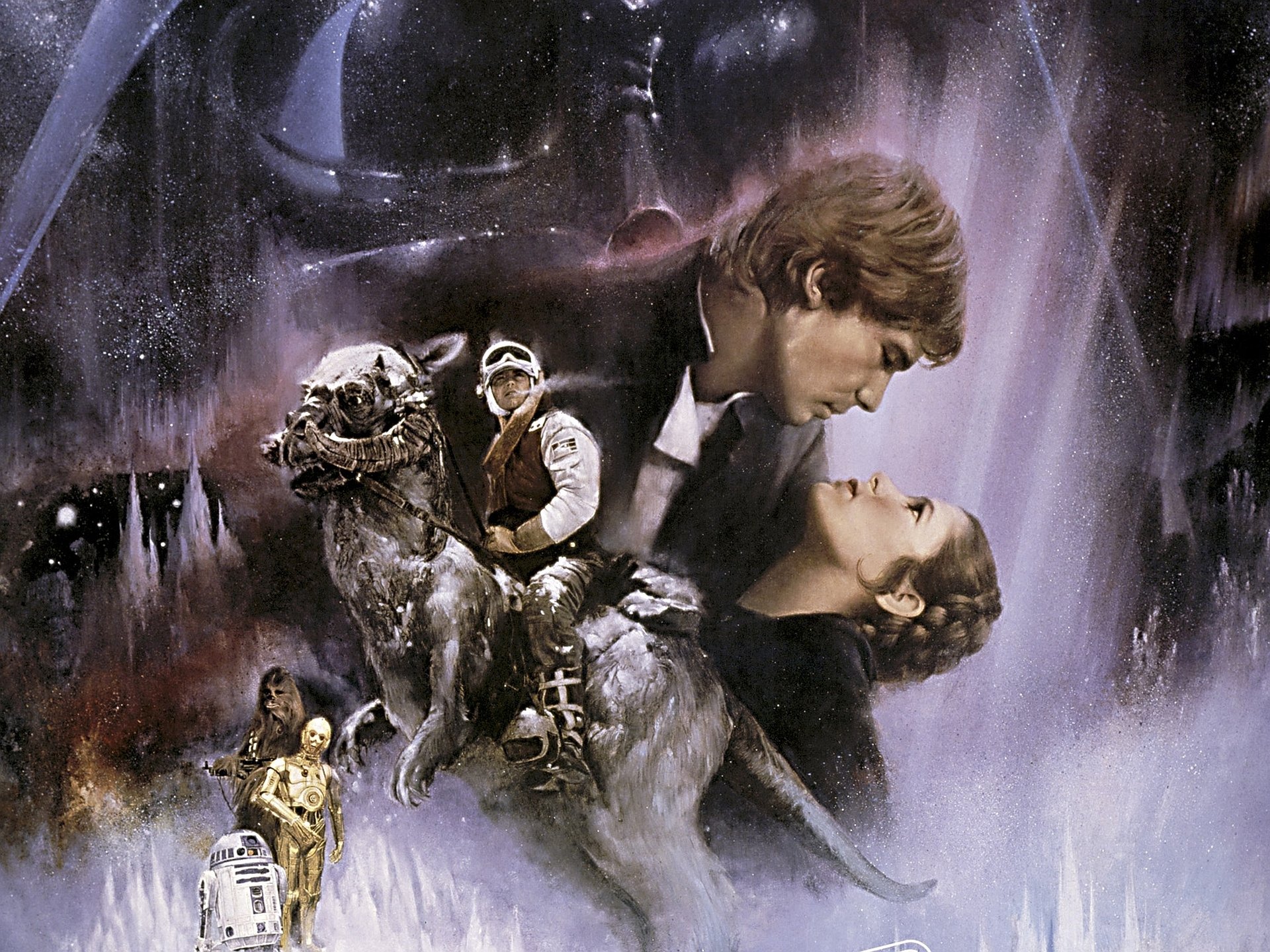 Ask any fan above the age of thirty which STAR WARS movie is their favorite.  Go ahead, I’ll wait.  Actually, I won’t, since we all know the answer; they're going to say THE EMPIRE STRIKES BACK.

It’s a film that has been both the blessing and the curse of the entire franchise, in that it defied expectations for what a sequel was expected to deliver, and simultaneously redefined how we viewed its whimsical predecessor.  It’s also become the model for what audiences think the STAR WARS saga, taken both as individual films and as a greater whole, is supposed to be.  It’s an impossibly high standard, and as much lightning in a bottle as the blockbuster that begat it.

This was the movie when shit got serious.  Lucas, along with director Irvin Kershner, producer Gary Kurtz, and screenwriter Larry Kasdan, took the breezy, Saturday afternoon serial-style adventure film concept, and they doused it in drama, irony, and revelation; then they smacked kids across the face with what was probably their very first Twist Ending. THE EMPIRE STRIKES BACK signals the moment when the trilogy stopped being referred to as "fun" and became the Me Generation's quasi-mythic and revered successor to DUNE and LORD OF THE RINGS.

There are many reasons for this, but one stands above others: THE EMPIRE STRIKES BACK is scary as hell.

Were you around when EMPIRE was released in 1980?  If so, you remember the advertisements.  The trailers.  The commercials.  The poster art.  At first it was like, "Look, a new STAR WARS movie!"  But five seconds into a thirty second advert, it became immediately apparent that new carried more than one meaning.  Yeah, there's Luke Skywalker, and Han and Leia and Chewie and all the rest; but right away it was clear that something was different.

I'll never forget the first time I saw a preview for THE EMPIRE STRIKES BACK.  I was four.  I knew STAR WARS as well as any preschooler could, and I was building my army of action figures and playsets from the original film.  Maybe it was my father who told me that a new movie was coming; but whenever it was that I first heard about it, the idea of the continuing adventures of the heroic Rebel Alliance seemed remote and far away.  And that spring afternoon when the commercial ran on a local Hagerstown channel, I sat open-mouthed at what unfolded before my eyes:

There was the “Imperial March.”

The Millennium Falcon under attack.

A claw-like structure opening to reveal a seated Darth Vader.

Luke being thrown through a window over a bottomless pit.

And a wrinkled green creature, vaguely sinister, who answered Luke's claim that he wasn't afraid with an ominous, "You will be..."

I was scared to death.  And I knew I had to see this film.

Your age is an important factor, but I doubt even adults were prepared for what they got when they planted butts in seats and were first hit with the icy blast of Hoth’s winds.  Gone was the earnest Cheez Whiz that had defined the brand up to this point.  The cinematography was both richer and more dramatic; shadows now lurked in both the foreground and periphery of the frame.  Colors popped by virtue of their existence in ever-present darkness.  Even the music was different this time.  The now-immortal “Imperial March” brought a sense of opera, of sheer majesty, to the STAR WARS saga.  John Williams weaved themes that were sinister, foreboding, and seemingly inevitable…and then suddenly magical, or romantic, or epic; only to then bring Vader’s theme back around as an unquiet murmur.  Even beauty felt threatening in this redefined galaxy where friends couldn’t be trusted, and trusted mentors might actually turn out to be old liars.

And how did it all start?  With our sunny and optimistic protagonist Luke Skywalker disfigured -- disfigured...!!! -- by afucking snow monster.  Five minutes in.  Five minutes.  When had that ever happened in a movie with a MUPPETS SHOW tie-in?

Suddenly, no one was safe.  The Good Guys might die.

That sense of malice oozing from every creative element coalesced and took form, like Vader's gloved hand was reaching threateningly from the screen to choke you with long, grasping fingers.  There was a feeling of impending disaster, and innocence lost.  The concept of destiny can inspire a child in stories like HARRY POTTER AND THE SAME BOOK AS THE LAST ONE, or it can set off alarm bells.  THE EMPIRE STRIKES BACK is the first hard lesson kids of my generation learned from the Happily Ever After perspective, as their fairy tale expectations crumbled while their heroes kept trying and yet somehow managed to fail in nearly every instance.  From minute one, it was immediately uncertain whether Luke, Han and Leia were going to make it out alive.  Had there ever been such a sense of doubt and dread in a franchise film before?  We take these things for granted in modern blockbusters, even when they cheat their way out of no-win scenarios; but for the children of 1980 -- and for their parents, who must have started worrying whether little Timmy or Bobby were going to have nightmares over a kid’s movie -- this was incredibly heavy stuff.

The Rebel base is attacked and destroyed.  Our heroes flee from one scary place to the next.  Safe havens, such as they were, seem readily designed for bad dreams, or at the very least a sense of unease.  The previously fun concept of becoming a Jedi Knight is instigated by a near-death experience (a far cry from later manifestations, and far more compelling for it); the signs and portents lead Luke to a planet that looks and feels like a muddy, sweaty panic attack brought to life.  Dagobah, and its wizened old inhabitant, gave The Force a new shading, and one that seemed to bend away from the light.  What was once described as an energy field that both controlled and obeyed one’s commands now offered the power of telekinesis, which, like everything else in the film, loses its playground charm once Darth Vader hits Luke with a full-on poltergeist attack.  There was a vagueness to time itself on this swamp planet, and a dreamlike sense of prophecy.  Every one of Yoda’s lessons seemed designed to warn of us impending doom and disaster, which was underlined by Luke’s Dark Side-induced visions of beheading his evil, future self.  STAR WARS had become a Horror Movie.

Nowhere was this more apparent than in the transformation of Darth Vader from robotic henchman to Nazi Wizard Enforcer.  From his first appearance, he’s a shard of black, broken glass, cutting through the veneer of order and sanity. His helmet is polished and his silhouetted frame is now wider; his voice has become a cold, demonic purr of seething, controlled rage.  He doesn’t walk so much as glide like an apparition, dealing death to even those who serve him.  With one tantalizing glimpse at the head beneath the helmet, we realize this is both man and monster.  He’s Jason Voorhees with an upgrade.

Even Cloud City was an unsettling place.  We can fell the shadows lurking in the corners of tranquility.  The most frightening moments in our lives take place in the safety of broad daylight; and no one expects to find the intergalactic Boogeyman sitting in the dining room, palming off laser blasts like a wheezing, unholy emissary from Space Hell.  Then our heroes – and by extension, us – are led away from that unreliable world of white and gold and into the literal basement of every kid’s fears, where the darkness envelopes, and from which there is no escape.  Han Solo (always the adult audience surrogate) is first tortured and then frozen; the soundless, unending shriek on his face turns him into a literal action figure a child both has to own and yet hide away at the bottom of the toy box because of its terrifying implications. This carbonite casing may be a coffin.  We may be watching the funeral procession of dead man.  He is screaming in stasis.

And then there’s Luke.  He’s experiencing vague, ambiguous visions of his friends in torment, and subsequently abandons his training, all while we’re internally shouting for him not to.  We as children see Yoda (whom we still haven’t quite figured out) and Obi-Wan Kenobi as the teacher and parent in this scenario, respectively; Luke, who’s just a kid like us, rejects their guidance, even with the threatening implication that these figures of stability can’t help him if he’s hurt.  The sense of impending disaster is palpable, like a slow motion car crash into a brick wall.  But somehow, it’s worse than mere death: he is symbolically castrated, both physically and then emotionally, when he first loses his hand and then learns -- like the audience -- that Obi-Wan Kenobi has fucking lied to us.  He’s lied to us all.  The Bad Guy could be your parent.  Your parent could try to kill you.  Luke’s reaction?  Attempted suicide by falling.  At this point, THE EMPIRE STRIKES BACK has become the cinematic equivalent of childhood disillusionment.  If I can't trust my STAR WARS to play fair and give me a happy ending, what the hell else is going to happen in life...? CUE AN ATTACKING YETI.

The film was scary.  The Marvel Comics adaptation was scary (particularly the rendition of Yoda, based on an earlier design).  The abridged record, narrated by Malachi Throne in a voice that that made the hairs stand up on the back of your neck, was also scary.

And part of what made it all so scary was the lack of resolution.

No film ever created three years of schoolyard debate the way THE EMPIRE STRIKES BACK did.  Was Darth Vader really Luke's father?  Would Luke turn to the Dark Side?  Would Han Solo survive?  Even the question of how and where Luke would find a new lightsaber was in doubt.

And like Luke and Leia in the film's final moments, all we could do was stare and ponder the future, which was no longer as certain as it was before, and more frightening because of it.