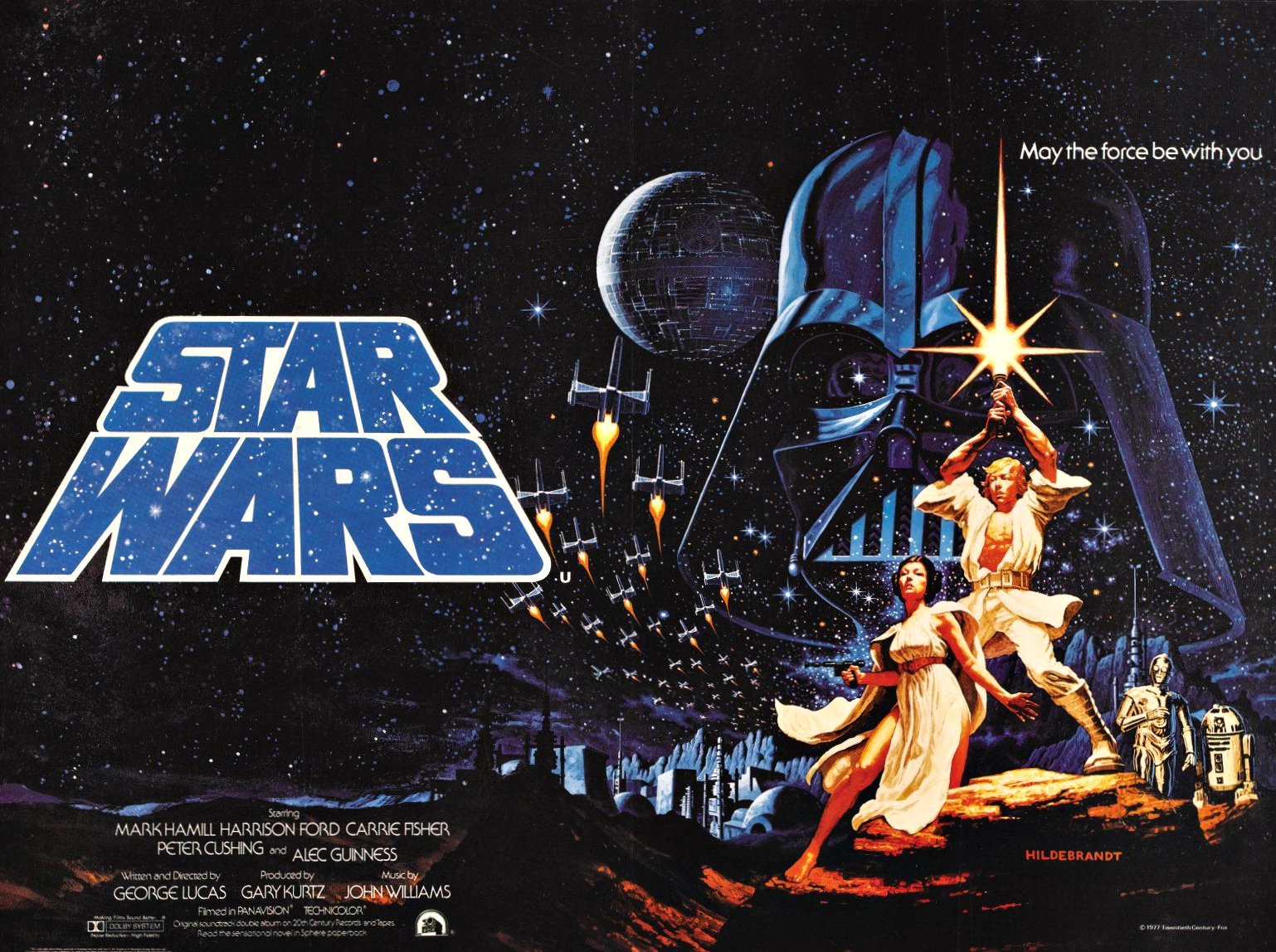 That's the name of the film released in May of 1977.  I'll just make it clear, right off the top, that we're not going to call it A NEW HOPE, or EPISODE IV, or any of that crap.  The AFI calls it STAR WARS; kids on the playground called it STAR WARS; the read-along record called it STAR WARS.  The whole subtitle and numbering thing didn't begin until the release of THE EMPIRE STRIKES BACK (and in the case of STAR WARS, until the movie's second re-release in 1981).  Even then, it was never more than a fun, in-movie kind of gag that only became part of marketing with the advent of those three movies that we’ll absolutely get to later.  So call it whatever you want on your Facebook page, but right here we're going to stick with STAR WARS, please.  Flame away, Talkbackers!

For me to discuss the enormous impact of this film would require more space than I have, and it would probably be met with replies of "TL;DR" anyway, so I'm not even going to try.  After all, what’s left to be said?  STAR WARS changed pop culture forever, from the way movies are made to how they’re marketed, packaged, wrapped, sold, opened, and enjoyed.  Anything and everything owes a debt to STAR WARS, even peripherally.  It’s been celebrated and dissected, spoofed and enshrined, and even the most casual, disaffected fan can relate trivia on a level that’s unimaginable for just about any other franchise.  We can recite its dialogue, hum its musical cues, and somehow lose ourselves in its dated timelessness in a way that transcends generational identification.  The hair doesn’t bother us; neither do the practical effects, which still stand up even today.  Can you say that about any other time capsule piece…?

So knowing full well that the first three films are the hardest to discuss -- being there’s so little that’s new to say -- I turn your attention toward an element that only seems to come up in conversation in terms of its development, rather than its final form.  It’s one of the most under-discussed aspects of this first film, and a topic that's usually a sore point when talking about George Lucas.

Yes, the screenplay.  We all know that STAR WARS was groundbreaking for its pioneering development of special effects, and for how films were merchandized, and so many other amazing things; but this film's most important element is unquestionably the script.  Without that, there’s nothing.  We've all seen (or blocked out, or sought therapy for) STAR WARS films with shitty stories and terrible pacing, at least two of which involve screenplays Lucas literally turned in days before cameras rolled.  Seeing it from that perspective, it’s a testament to the original movie just how important this element really is...and how well it works.  It's both the foundation for the movie, but also the blueprint for the rest of the series.  In some cases it has been built upon, and in other cases recycled.  What gets forgotten or overlooked in our post-Prequel universe is just how effectively the script unpacks itself and introduces us to that galaxy far, far away.

Do a Google search for STAR WARS George Lucas 1977 script.  Read it.  Then watch the opening ten minutes of the film again.  It’s the most important sequence in the entire movie, both for what it says, for how few words it uses to say it, and then what it leads to.  Pretend you know nothing of these characters or their universe.  Is that even possible anymore?  Probably not, but nonetheless, forget the legacy, the cultural memes, all of it; remember seeing it for the first time.  The 20th Century Fox logo; the Alfred Newman fanfare. “Lucasfilm.”  And then darkness, and silence.

A long time ago, in a galaxy far, far away…

SMASH CUT to:  STAR WARS.  The orchestra hit.  The title, vanishing into the depths of space.  And then the FLASH GORDON-style scroll begins.  A vast and sprawling frontier lies before us, filled with enemies and heroes.  We are thrust into it, in media res.  The story has already started, and you missed the last episode, but it’s okay; you’ll catch up.  Pass the popcorn.

Right out the gate, we're thrown into the deep end. The Rebel Blockade Runner is pursued by the Empire's sinister agents, who've stolen plans for the Death Star.  Princess Leia hides the plans in an astromech droid and sends him off with his bumbling sidekick to find a war hero in hiding.  Enter Darth Vader, the Emperor's evil black ops enforcer, who sends his troops to locate the missing plans.  We learn the state of the galaxy and who the Good and Bad Guys are, as well as the threat and hope of countless star systems.  All of this is conveyed during the course of an intergalactic sneak attack -- and it's all in the first ten to twelve minutes.  Lean, mean, and so very tight.

It’s impossible to ignore the work of film cutters Richard Chew, Paul Hirsch, and Marcia Lucas (to say nothing of George himself); the brisk pace is shockingly modern, particularly given the aesthetics of the time.  This is so much of what captivated audiences in 1977, and it’s invisible against the spectacle raging onscreen, or the sound and fury exploding from the speakers.

But without that script, there’s no blueprint.  No ships.  No 'droids, no princess, no plans. Only an empty starfield.

The story goes on like this, relentlessly.  Each scene successfully guides us into the next, and the universe unfolds.  We learn about The Force, and who the Jedi Knights were; and we’re told, in bite-sized exposition, the backstories of both Luke Skywalker's unnamed father, and the fallen Jedi, Darth Vader.  We meet Han Solo and discover his dangerous debt to Jabba the Hutt.  There’s light speed.  The Millennium Falcon.  Princess Leia and Alderaan.  No heavy information dumps to slow things down: each scene both economically establishes backstory and instigates plot development as our heroes run to and from danger, pursued all the while by the Empire's sinister agents.  Watch the film again and pay attention to how effectively Lucas (with help from Kurtz, DePalma, Katz and Hyuck) links the events in each scene so that the story carries us from moment to moment while simultaneously constructing the framework for the entire series to come.  Ever wonder why so many 21st Century films feel sort of fluffy and aimless, like just a bunch of shit happening without motivation or momentum?  How scenes could be rearranged without changing the story?  Revisit STAR WARS again.  It’s a fairy tale, and it’s told magnificently.

Again: remember what it was like to see this for the first time.  Pay attention to how a concept as broad as The Force is defined in only the vaguest terms, and yet when the movie is over, you get it.  You understand it.  There's still room to build and expand and explore, but for right now, it's exactly what you need, even though you know almost nothing.  There is an impression of depth, of history, threaded throughout the story, similarly teased and solidified.  Tantalizing world-building occurs when we hear of Clone Wars and the death of Luke's father, all revealed in the same sketch-like fashion, and it's enough.  These things become far more compelling for what we are not told rather than what we are.

Stories like THE LORD OF THE RINGS embrace their epic nature, and afford themselves epic length.  They take their time establishing characters and the worlds they inhabit.  STAR WARS does not.  It's fast, breathless, and told in broad strokes that even a child can understand and appreciate.  This simplicity has been derided by many critics, and yet it's a formula that’s often imitated and never successfully duplicated.  Basically, it’s a cheeseburger.  An especially well-madecheeseburger, but it's still a cheeseburger.  Everyone loves a cheeseburger.  An entire family can sit down and enjoy cheeseburgers together.  How many other movies are like that…?

STAR WARS is fun.  And it’s fun that begins and ends with a yellow notepad.