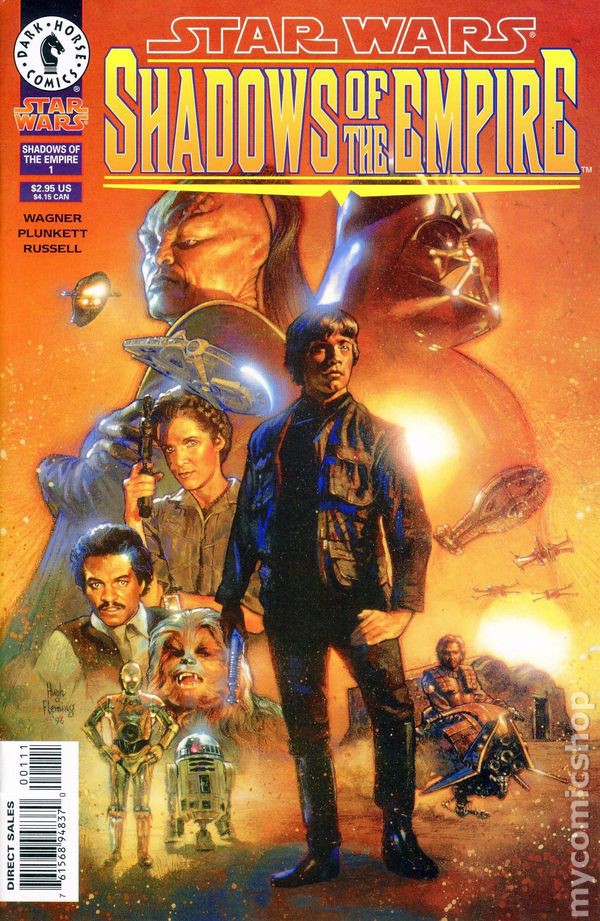 One of the more interesting products to emerge from the STAR WARS line during the period following HEIR TO THE EMPIRE (and its many sequels, prequels, sidequals, and whateverquals) was SHADOWS OF THE EMPIRE.  I call it "product" largely due to the multimedia aspect of the release; SHADOWS OF THE EMPIRE was essentially a movie without the movie.

Lucasfilm was testing the waters for the SPECIAL EDITIONS (which were in turn an effort to gauge audience potential for new STAR WARS films).  As such, SHADOWS OF THE EMPIRE was a proving ground.  You got all the ancillary tie-ins typically associated with a cinematic STAR WARS release -- a novel, a comic adaptation, a video game, action figures, and a soundtrack – you just didn’t get the actual film itself.  It was pretty audacious for what it was.

SHADOWS OF THE EMPIRE, appearing in the spring of 1996 with appropriate fanfare, delved into that mysterious time period between EMPIRE and JEDI.  Fans had long speculated about this era over the years, filling in the blanks based on throwaway statements from The Maker himself (which were usually dispensed during interviews in which he famously made shit up on the spot).  Now, according to Lucasfilm, the full story would be told, for reals.

But is a story with a known resolution worth telling?  Are there genuine stakes?  Dramatic tension?  It’s an important thing to consider, particularly given those three long-dreamt-of movies that were just waiting for their chance to step onto the world stage, take their place in the spotlight, and disappoint us all.  Had we asked ourselves this question in the days leading up to THE PHANTOM MENACE, we might have tempered expectations accordingly.

But we’ll get there.  Meanwhile: SHADOWS OF THE EMPIRE.

The general timeline established by the Expanded Universe* states that roughly six months passed from the moment that Lando and Chewie set out to "find" Han Solo (despite knowing exactly where he was going), and the subsequent Rebel infiltration of Jabba's palace.  Six months.  That's a pretty long time.  What were our heroes doing during the interim?

Clearly Luke has continued training on his own, given that we see him re-emerge in JEDI with both a new lightsaber, and a self-appointed title.  But what about Leia and the rest?  Did Boba Fett take six months to reach Tatooine?  Or did he show up, collect the bounty, and then decide to just hang out at the palace indefinitely?  Or was he popping back in sporadically, looking for work, and just happened to be there for Plot Reasons?  It's all a bit sloppy when you look at these finer points, which is why it's sort of best to just go into JEDI worrying less about the background than what's happening onscreen; otherwise, it all falls apart on inspection.

The business model employed on this multimedia endeavor was actually more interesting than the story itself.  SHADOWS OF THE EMPIRE wasn't middling or Meh on principle; no one thought this wasn't a fascinating corner of the STAR WARS universe to explore.  There are all sorts of potentially interesting scenarios involving Luke’s transformation from cocky Rebel to noble would-be Jedi Knight, or Leia’s grief over Han’s maybe-sorta-possible death.  Hey, Lando infiltrating Jabba’s palace sounds like a fun story, too!  Why not tell that one, too?

Again, these are scenarios.  Standalone issues of a comic book series.  Framing it as STAR WARS EPISODE V.V implies a certain narrative importance, or value equal to any of the films.  But the problem with this was that we already knew the ending.  The adventure lacked consequence.

The short version of a long synopsis is that the Emperor has sensed Vader's emerging goodness following the confrontation with Luke at Bespin.  Using this to his own advantage, crime lord Prince Xizor attempts to take Vader's place as Palpatine's lieutenant and chief confidant.  Meanwhile, Leia's search for Boba Fett (i.e., a straight line on the map from Cloud City to Tatooine) causes her to cross paths with Xizor, who secretes sex magic that makes her fall in lust with him.  Then Luke builds his lightsaber, rides a swoop bike around, and Vader blows up Xizor's ship/skyhook, and ostensibly, the crime lord with it.  At one point, Chewbacca disguises himself as a bounty hunter by wearing a monocle.  THE END.

That's about as much plot as the book contains.  Like most STAR WARS novels, SHADOWS OF THE EMPIRE forgets the Original Trilogy’s use of shorthand and brisk narrative pace.  But there was a twist.  In a weirdly clever bit of storytelling, SHADOWS author Steve Perry** told the tale from a God’s Eye point of view, while the tie-ins played elsewhere in the same sandbox.  So basically, if you wanted the whole story, you had to buy it all.

Confused?  So were consumers.  Beyond the novel itself, you had the comic book, which, in four issues, told the same story from Boba Fett’s perspective.  Then you had the Nintendo 64 game, which begins with the battle of Hoth, and retcons EMPIRE to include the appearance of Han's buddy Dash Rendar (another Corellian smuggler with both a cocky attitude, and a ship with its cockpit on the side).  Rendar was probably the lamest aspect of the whole endeavor, being that the Han Solo void was simply filled by a two dimensional carbon copy of the exact same character.  Both cancel out the significance of the other.  Rendar's subsequent claim to fame -- and indeed, the validation of SHADOWS OF THE EMPIRE as legitimate canon -- is the fact that his ship, The Outrider, can be seen departing Mos Eisley in the STAR WARS SPECIAL EDITION.  It's one more reason for me to hate those particular versions.

It was a cool idea, story-wise, to explore this chapter of the narrative, and to offer multiple POVs.  Marvel Comics had three years to kill between EMPIRE and JEDI, and as a result, the monthly STAR WARS book contained an awful lot of fake-outs ("In this issue, they find Han Solo!  Seriously this time, but not really!").  There were tons of flashback stories, and seemingly endless wheel-spinning.  EMPIRE's cliffhanger didn't do the comic book any favors in that regard; neither did it help that the Marvel writers were left in the dark about George’s creepy resolution to the ongoing Luke/Leia/Han love triangle: one that was about to be thrown into the next movie like a dead fish, stinking in the sun.

SHADOWS suffers none of these problems.  It has many of its own, but sudden continuity shifts and dropped narrative threads aren’t among them.  The book, comic, and video game all have the advantage of knowing what happens next by virtue of being created (likely by committee) long after the film trilogy was complete.  So there’s that, at least.

But even then, author Steve Perry*** struggles to find anything compelling for our heroes to actually do.  You can't build tension when you place your characters into situations where we all know they're going to survive.  There’s no sense of danger.  Is anyone really concerned for the safety of Princess Leia, or Luke, or anyone else who will later appear in RETURN OF THE JEDI?  Because the answer is No, the only other option is to establish new threats and characters that, conversely, can’t and won't carry over into the next chapter.  As such, none of it matters.  It's dramatic inertia, and underlines the reason why prequels, in general, don’t work – there’s absolutely nowhere for the story to go except to the beginning of the other story we’ve already seen, read, or heard.  Filling in some background is all well and good, but there’s no seat for us to be on the edge of.

What SHADOWS OF THE EMPIRE accomplished, though, was the introduction of Lucasfilm content specifically designed to test the brand in an era during which it had become cult and niche; and to establish a marketing strategy for what would shortly follow: first the SPECIAL EDITIONS, and then that fabled second trilogy fans had been clamoring for over the last decade...

*Keep in mind: according to Disney, none of this counts anymore.  Except some of it does.  And the rest doesn’t.  Or something.  SEE: The New 52. 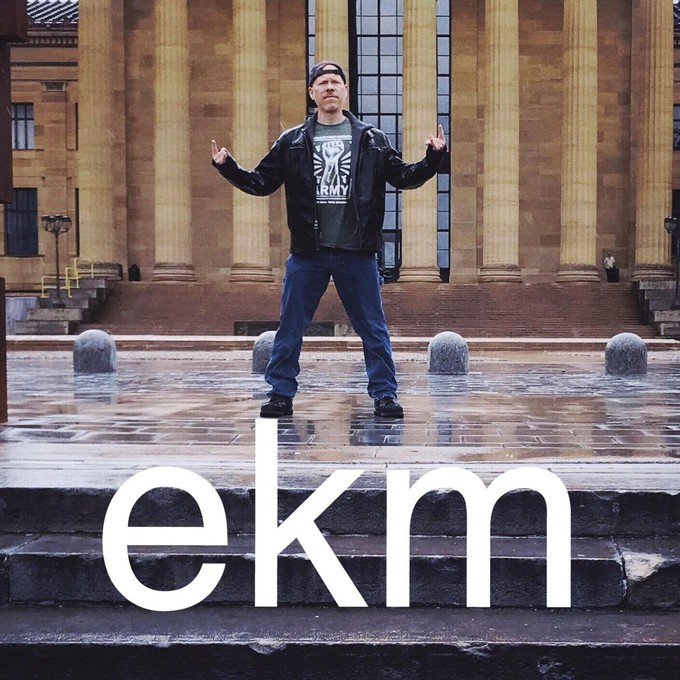