Welcome back to FRIGHT FIGHT FRIDAY folks! Today is round 2 of our Alien bracket semi-finals and we have two slept on, but ultra-dangerous competitors for you! Critters VS Sil! Both of them won their first fights to move on, let’s take a quick look at how we got here! For a full rundown of the rules, click here! To catch up on past fights, click here and type in FRIGHT FIGHT FRIDAY!

Critters feasted on JoJo the Klownzilla, as well as a few unlucky cops who happened upon the scene; pulling an upset over the giant-sized, rainbow-haired terror. (I heard it took a crew of 10 men to remove just his shoes!)

Sil used her instincts and cunning when seduction failed against the Engineer.  In the end, he fell victim to her kiss of death. His own ego proving to be his greatest enemy.

By the time you're done reading this, there will be only one left standing to face the Predator next week in our Alien Bracket Final! Let’s go!

These little space porcupines of death are often underestimated. Sure, one by its little lonesome self probably isn’t the end of the world but think of cockroaches. What’s the saying? (If you see one…) Their appetite is insatiable, and they are known to strip the meat straight down to the bone in mere seconds. Kind of like piranhas. With red eyes. That live on land. (And come from space!) 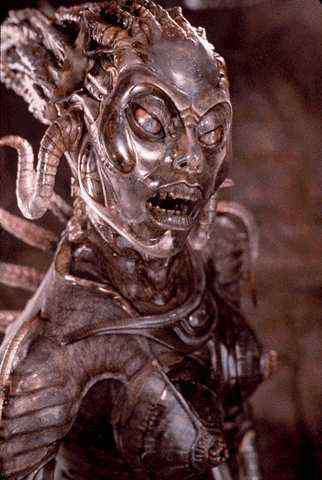 Sil is the product of alien DNA being mixed with human DNA because of… well… science, bitch. Her natural instincts are to mate and then to kill said mate. Literally, not slowly and figuratively like some women. (I’m kidding ladies…) Her instincts are beyond human and when in her alien form, she is capable of tremendous amounts of strength.

The sirens are blaring and the lights still flashing, illuminating the empty, small city block. The red and blue reflects off of the dark windows lining the street. Two skeletons lay bare in the road, picked clean of their meat and all of their flesh.

They had their fun, but now it was time to get out of here before more of them come. The pack of Crites (minus one brave little Critter, rest in peace) moves quickly, putting distance between themselves and the scene of the crime.

They roll through the town, leaving a path of destruction in their wake, and consuming several small dogs and cats on the way to keep up their energy.

They come to a hill and then pause, looking down on the lights of the next town. Seems like a well enough time for dinner...

“I got to run to the bathroom. You want another drink?” The chair makes a scraping noise as he stands up and stretches.

“Please. White Zinfandel, thanks.” She takes the last sip of wine and hands the empty glass to him. He was a gentleman. She almost felt bad. Almost. After another drink that would pass or at least fade a bit. She couldn’t help the urges. So why beat herself up?  As he returns and hands her a full wine glass, she finds herself wondering if the spider ever feels empathy for the fly. She assumes not.

“So, you’re obviously not from here.” He pulls the chair out and sits back down as he sips his beer. “What’s your story?”

Sil looks at him, taken back by his statement.

“I just mean it’s a small town. There aren’t many girls like you around here. I didn’t...”

“There aren’t any girls like me anywhere.” She replies, interrupting his sentence. Suddenly, she doesn’t feel so bad.

“Hey, you want to get out of here?” She runs her finger around the rim of her glass as she talks.

God yes, before you talk me out of it! She thinks to herself...

Outside they hold hands as they walk towards Sil’s home. It’s late and the streets are hauntingly quiet. The night air is cool. The moon is bright in the sky and almost full and although he talks almost the entire way, Sil barley hears a word he says. She has other things on her mind.

“Isn’t that funny?” He squeezes her hand gently, cutting through her thoughts. “Sil?”

“What? Sorry, I was lost there for a moment.”

“What were you thinking about?”

“Trust me. You don’t want to know.” She replies with a smile. “We’re about a block up.”

The Crites watch from the shadows of a small alleyway as a woman and a man come up the street together. The man leans in towards her and whispers something in her ear as the pack quietly moves in.

They slide into position behind the unsuspecting humans, with one scrambling up on to the roof of the home they were approaching.

While the woman is fumbling around her purse for her keys, several red eyes glow ominously behind her. She extends her arm, inserting the key in the door but before she can turn the knob, she hears a muffled “whump” sound.

She turns around just in time to see him hit the ground. Some kind of creature was on his head, chewing into his skull. He lets out a scream as the Critter turns its attention to his face, sinking its razor-sharp teeth into his left cheek, ripping it completely off.

“What the...” Before Sil can finish her sentence the rest of the Critters swarm her date, stripping him all the way to the bone as she watches in disgust.

She decides not to wait for them to finish their meal and then turn on her, and shifts into her alien form. She may have been going to kill him anyway, but he was HERS to kill! She reaches down and rips one of the Critters off of the brutally devoured body of her would-be lover.

She looks at it with a hiss, then rips into it with her claws, tearing the poor little guy apart. With his blood and chunks of his fur covering her lower arms, she looks up at the rest of the Critters, bloodlust in her eyes.

The Critters stop chewing and pause for a moment, taking in what just happened. They group together communicating. Plotting. Their chatter sounds angry.

Sil charges at the pack, now down to 8 Crites. They disperse in all directions but her tail is lightning fast and catches one of them, impaling him like a meatball on a fork. 7 Crites.

She flings it from her appendage like an unwanted scab as another Crite attacks from behind, sinking his teeth into her leg. She lets out a cry but doesn’t go down. She grabs the little bastard with her claws, tearing flesh from her leg as she yanks him away. She bites him back, splitting him almost in half. 6 Crites.

The blood now covers most of her body as she stands in the doorway of her home. Her adrenaline is on full blast as her eyes scour the night. Where were they?

3 Critters roll around the corner, fast. They break in different directions, circling her. Weaving in and then out. She lashes at them with her claws but can’t connect. They close in from different directions as she switches her focus from one to the other.

In the background, the other three Critters move into position.

She lunges at the closest Critter, barely missing as the second and third scramble up her back. Her tail catches one, slamming him to the pavement hard, splitting his small skull like an apple. 5 Crites.

She grabs a hold of the second one as his teeth sink into the nape of her neck. She lets out another cry, feeling her skin tear as she pulls him off of her. Enraged, she squeezes him until he pops like a ripe tomato. 4 Crites.

Her bleeding neck heals itself as two more Crites move from the shadows, joining the one left in front of her. They form a half-circle in front of her, closing in, making it smaller and smaller and forcing her back. Their red eyes glowing like burning coals. Their teeth gnashing audibly as they encroach on her.

As the three Critters move menacingly toward her, the last Critter slowly sneaks up behind her and digs into the ground, holding his position. Waiting...

Sil moves slowly, backing away from the Crites, waiting for the right moment to strike. Her tail swaying, her claws ready for more blood. They were getting awfully close now. She would have to time it just right. She lifts her tail and as she goes to strike, falls backward over the little Critter waiting patiently behind her.

She lands on her back hard, losing her wind. The Critters waste no time and before Sil can get to her feet, they attack, feasting wildly. It takes the 4 Crites only 62 seconds to strip her down to the bones. Possibly a new record. 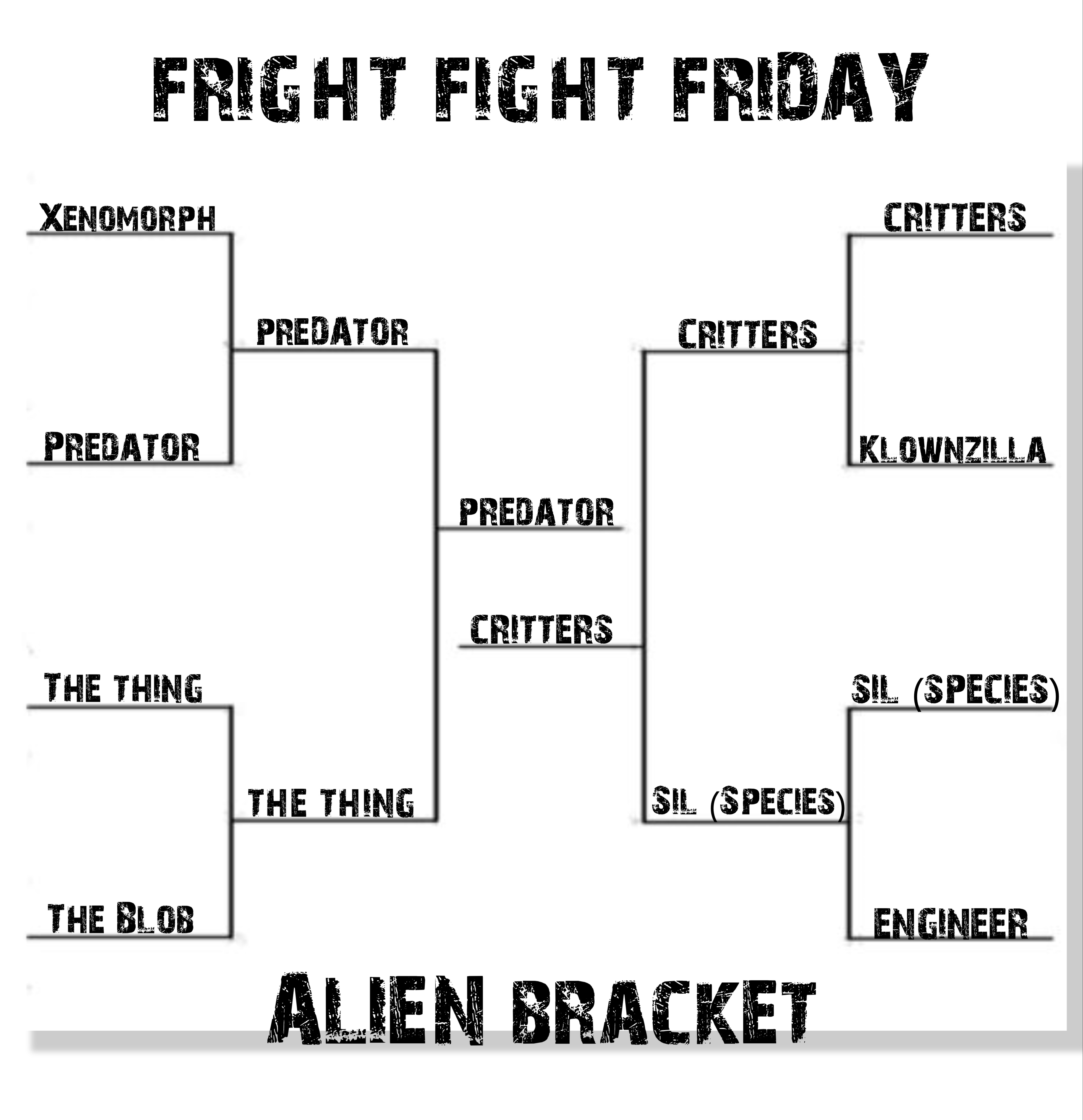 Ok, so there it is! Crites with the win! I think it comes to numbers for this one. Let’s be honest. Sil is a badass when provoked and she held it down for a while but there is only so much you can do against a pack that can intelligently communicate. They’re going to gang up on you eventually. Sure, Sil has a healing factor, but not if you strip her of her flesh and muscles entirely. That’s not growing back. In the end, the little guys were able to get her to the ground and piranha her to death. Sorry, Sil. Not this time.

Make sure to check back next week for our Alien Bracket Final! Predator VS Critters! This one will be wild! As always comment below and don’t forget to upvote your favorite fighter! Until next time, keep on geekin’ on my friends!