I'm excited today to tell you about two new discoveries for your reading pleasure: "The Proud & The Dumb" by Bob Freville and "The Lords of Invention" by Trenor Rapkins. 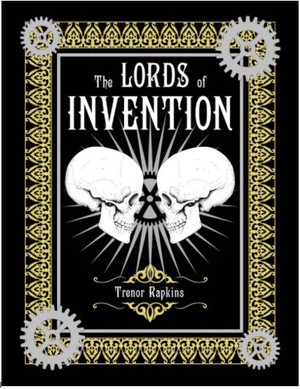 "The Lords of Invention" is a digitally-painted graphic novel by Trenor Rapkins that concerns a duel of ingenuity and willpower between two inventors at the turn of the century. If you're immediately thinking of Edison v Tesla by way of THE PRESTIGE, you're certainly on the right track. As Rapkins, himself, puts it on his website:

It is a tale of success and failure, achievement and envy, love and death.

The protagonist of this tale is a man named Augustus Scott. He is the inventor of such contraptions as the automentium machine, the electromagtronicon, and the steam-powered automaton. The antagonist is an aspiring inventor named Levi Pickett. Pickett lives in a basement and works a manual-labor job to pay for his menial existence. Unable to sell his ideas and find any other way out of his predicament, he devises a plan to steal Augustus Scott's next great invention. What happens next is not only a battle of strength but a battle of minds.

I really enjoyed reading "The Lords of Invention" and found the artwork to be quietly disturbing yet remarkably beautiful. There's certainly an Uncanny Valley effect as one tabs through the pages, and the muted browns of the sparse environments lend the events an early 20th Century vibe even more than the language. The motivations and reactions of the characters are relatively formulaic, though that adds to the overall scientific detachment the whole sordid tale seeks to invoke. Scott and Pickett take turns being both victims and antagonists, and the ending is a cautionary tale on both ambition and revenge. In reading through the narrative, one can see the influence of Alan Moore in a perceived ambivalence towards the labels of right and wrong, hero and villain, which is done a disservice in Rapkins' statement which clearly points to Pickett as a thief and scoundrel. However the story itself stands strong in an ambiguity that allows an interpretation that is even more tragic than the events at face value. It's a truly creative work, and the author's notes towards the end of the novel along with early sketchwork help to complement the reader's journey through his mind. 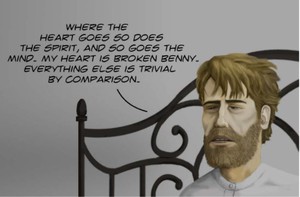 You can order a copy of the book as a paperback or an eBook at Barnesandnoble.com or amazon.com or learn more about it at Trenor's website at 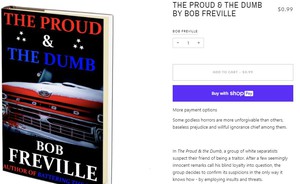 Next was "The Proud & The Dumb" by Bob Freville, a 40-page short story of such wickedly delightful subversion as I've read in quite some time. It is howlingly funny while also deeply unsettling, as many can unfortunately hear the voices of acquaintances and colleagues in the mouths of its trio of antagonists. The story's synopsis on godless.com reads:

Some godless horrors are more unforgivable than others, baseless prejudice and willful ignorance chief among them.
In The Proud & the Dumb, a group of white separatists suspect their friend of being a traitor. After a few seemingly innocent remarks call his blind loyalty into question, the group decides to confirm its suspicions in the only way it knows how - by employing insults and threats.
These nasty threats are met with answers the group is unwilling to confront, answers that lead to a series of increasingly absurd and violent acts.
From author/filmmaker Bob Freville (Battering the Stem; The Network People; Pig Lipstick), The Proud & the Dumb reads like a mutant cross between court room testimony and the worst backyard barbecue banter this side of Hell.

The story is fascinating in its depiction of faux-intellectuals and willfully ignorants, and one can't help but smirk as the clearly talented Freville uses his gift to give voice to some of the most ludicrous exclamations ever put to paper. There's a lyrical quality to the banter between Liam and Gunther at the start of the story that evokes Samuel Beckett's sense of timing and wordplay that is made all the more impressive by the content of the conversation at hand. As the story rachets up, becoming more violent and incredulous, it employs an overcorrection so unexpected and extreme that the reader finds themselves backing up to enure what they've read. It seems no stone goes unturned in Freville's examination of that subset of American patriot that feels oppressed on all sides at all times. As laughable as their diatribes read, their fear and desperation make them dangerous villains on the page and in the flesh.
Perhaps an even more impressive find is Godless.com, itself, which is a literary hub of villainy that I didn't know existed until pointed in its devilish direction. It seems to host a bevy of subversive fiction meant to disturb, provoke, titillate, and delight. The most expensive publication on the site appears to retail at a whopping $4.99 and many of the stories are available to read for only 50 cents. For fans of Bob Freville's "The Proud & The Dumb" or James Harberson's A Disgusting Supermarket of Death, this site looks like a new home.
Freville is releasing a new novella in May called The Filthy Marauders and interested readers can preorder this work in eBook or paperback from theevilcookie.com.
Until next time, everyone take care of everyone else!
-McEric, aka Eric McClanahan-
Follow ericmmcclanahan
Readers Talkback
comments powered by Disqus
Top Talkbacks
Trending