Happy New Year to all and I hope with genuine sincerity that you’ve jettisoned your resolutions and resigned yourselves to remaining the badasses you’ve been all along. I don’t know about you but waking up every day in an apocalypse has done wonders for my self-esteem… If I can live through this, I can do anything.

But speaking of resolutions, I did not accomplish all of mine last year. One that I did succeed in completing, however, was maintaining a reading list of at least one book a month (which actually just morphed into making sure I read at least twelve books last year). Imagine my elation, then, when I received an email in October asking if I’d like to review A DISGUSTING SUPERMARKET OF DEATH by James C Harberson III, a collection of short fictions that “examine first-world excesses and what happens when the spiritually vacant chase ever-more-novel depravities.” Color me intrigued!

I’ve filed this under the COMICS banner of the site as we don’t have a books review section, but I was honored to be asked to review this work and really looked forward to diving into it. Ever since I got the chance to review Mark O’Connell’s WATCHING SKIES back in ‘18 I got bit by the lit crit bug and anticipated my next turn into the page. Harberson’s collection did not disappoint. As the final line of the synopsis read: “Horror tinged with comedy or comedy tinged with horror, these stories should delight even the most jaded speculative fiction fans.” 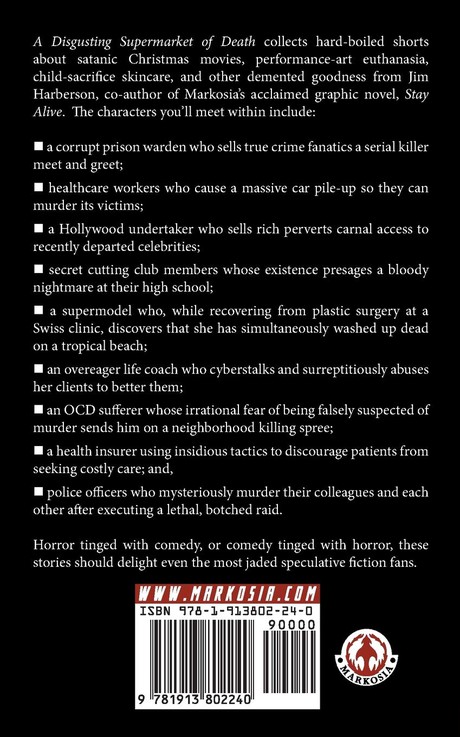 And delight, it did. “Speculative fiction” is a fitting descriptor for the twenty-two stories within this collection, as they begin with tropes we readily acknowledge and relate to before quickly subverting or even perverting our distractions into dystopian tales of bloody murder, death, and depravity. Oftentimes when reading an author’s work one will get a feel for their style and be able to accurately predict where they’ll take a given narrative; I’ve done so with Chuck Palahniuk, Dylan Thomas, even Neil Gaiman (I love Neil but he’s written the same story at least four times). Not so with Harberson. Even when you know he’s going to twist the knife and you see its glint from a mile off, he still manages to slide it between your ribs before you even knew he was behind you.

The stories within A DISGUSTING SUPERMARKET OF DEATH are lean, several reading more like flash fiction than short stories, and the writing is terrifically efficient and thoroughly evocative. He invites the reader to supplant themselves within the narrative by weaving its world around us, pulling cues from our lives to create familiarity or even a sense of discomfort before he razes the Earth and rockets us to hell. I can honestly say that I was unable to read all of these stories in one sitting; not because they’re not compulsively readable but rather because they’re so brutally and unflinchingly bleak, while still remaining entertaining and oftentimes darkly hilarious. I don’t think I’m giving anything away when I tell you that in every single story everyone dies.

I did have a few questions for James after I finished the work so I shot them off to him in an email and he graciously responded. Here is that exchange: 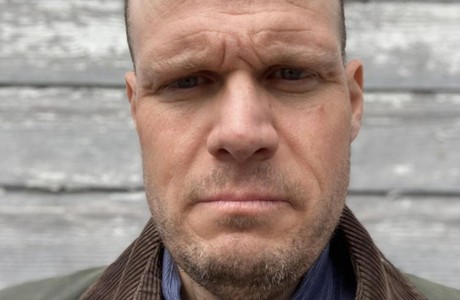 EM: First off, where do you get your ideas from? Your premises are all so novel, like Palahniuk channeling Dick. How do you dream up this stuff?

I write speculative fiction, so I speculate: What happens if you push philosophical concepts to absurd conclusions?  What happens if one tries to become a god by satisfying all of one’s desires?  How many people is it okay to sacrifice to the “greater good?”

I also love mashing up incongruous ideas for maximum irony and/or camp.

And I often draw upon my experiences practicing criminal defense and civil rights law: I watched state actors enforce inhumane laws and procedures regardless of how absurd the consequences.  Some did so indifferently, some zealously, some because “the law is the law.”  I’m not sure which motive frightened me most.

Here are some of my influences:

I also love Last Podcast on the Left.

EM: Your bio says you attended Cornell, Yale, and UPenn, and you're living in New York, but I noted several European influences in the writing. Are you from overseas or is this an intentional distancing from the American Consumer Machine?

JH: I was born and raised in upstate New York.  However, my education (which includes three years in boarding school) exposed me to people from all over the world, which helped me see America from outside itself.  I’m quite grateful for that.

My distancing from the American Consumer Machine isn’t intentional, but it tends to be inevitable.  I’m naturally skeptical and contrarian, so the distancing follows.  Whenever I’m surrounded by agreement, I get uneasy, even if I agree.  Consensus can become orthodoxy, and orthodoxy too often does people’s thinking for them.  Worse, consensus can become a mob.

EM: There's a lot of pitch black humor along with all of the death and mutilation. Who are some of your favorite satirists from whom you draw inspiration?

EC published horror, science fiction, and crime comics from 1950-1955 (Comics Code Authority content restrictions led publisher William Gaines to cancel them).  Tales from the Crypt, Vault of Horror, Haunt of Fear, Weird Science, Weird Fantasy, and Shock SuspenStories largely defined my love of speculative fiction.  The stories typically featured an ironic twist ending, which in the horror comics often meant inventive dismemberments or similarly amusing fates.  My favorite EC writer-artist is Al Feldstein.  He rendered compelling covers and stories in a brilliant wood-block-print-like style that captured the square reserve of 1950s culture while undermining it with the horrific and fantastic.

Also published by EC, it started life as a comic until William Gaines converted it to a magazine to escape Comics Code Authority content restrictions.  MAD cynically but hilariously portrayed American society’s various dysfunctions, especially people’s grotesque conceits and self-contradictions.  MAD taught me to cultivate a detached and skeptical approach to life, but always with a sense of humor.

Judge Dredd is arguably Great Britain’s greatest comic book character.  His adventures appear in the sci-fi weekly 2000 AD.  Dredd inhabits a dystopian, post-apocalyptic future in which people have gathered into vast “Mega-Cities” following a worldwide nuclear war.  Mega-City One, Dredd’s jurisdiction, functions under martial law derived from a fascist positivism and superintended by “Judges,” enforcement officers who subdue and sentence (or execute) perpetrators on the spot.  Dredd enforces the law perfectly and therefore to a fault.  Mitigating circumstances are irrelevant.  Justice is defined exclusively by the letter of the law, and the authority behind the law emanates exclusively from the state.  Dredd’s adventures remind me of the indifferent and sometimes malevolent authorities I encountered practicing criminal defense and civil rights law.

EM: The stories have a cinematic quality to them that I could easily see illustrated, animated, or filmed. Any plans to pursue another medium with these or similar stories?

I’d love to develop my projects in other media and welcome invitations to do so.

My first book, Stay Alive, is a graphic novel (published by Markosia in 2020).  Stay Alive is a horror comedy about three of America’s preferred past times: celebrity exploitation, mob justice, and serial murder.  Its heroine, Jane Morgan, is an actress fallen from an Oscar-nominated film debut into personal misadventures and Z-grade, T-and-A slasher flicks.  Desperate to rescue her career, she provokes uKill.com.  uKill is a mob justice entertainment consortium that murders whomever its web site patrons choose by popular election — literally anyone, anywhere.  By spoiling the last-wish pro baseball adventure of a terminally ill child, Jane becomes uKill’s target.  She parlays her calamity into a starring role on “Stay Alive.”  It’s a reality TV show about her attempt to avoid being uKilled.  Jane’s blood-splashed redemption path follows, populated by stalkers, assassins, and show-me-the-money allies. 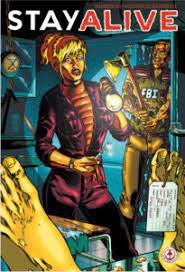 EM: This collection is so ambitious, so accomplished, that I have to wonder what, if anything, you held back. Was there an idea that either went too far or you couldn't quite figure out how to approach that didn't make it into the collection?

JH: Sure.  I love tweaking speculative fiction tropes to make them fresh.  If I like the results, I share them.  If I don’t, I don’t.  Fortunately, I usually like the results.

EM: What's next for you?

Personal favorites of mine from the text are “Ars Gratia Mortis” which reminded me of a David Foster Wallace perversion, “#meatoo” from which the full text gets its title, “Peak Bliss” which played out like a Philip K Dick tale, and “The Ice Cream Man” which gives the reader the drivers’ seat view of a timid sociopath à la Ryan Reynolds in THE VOICES. 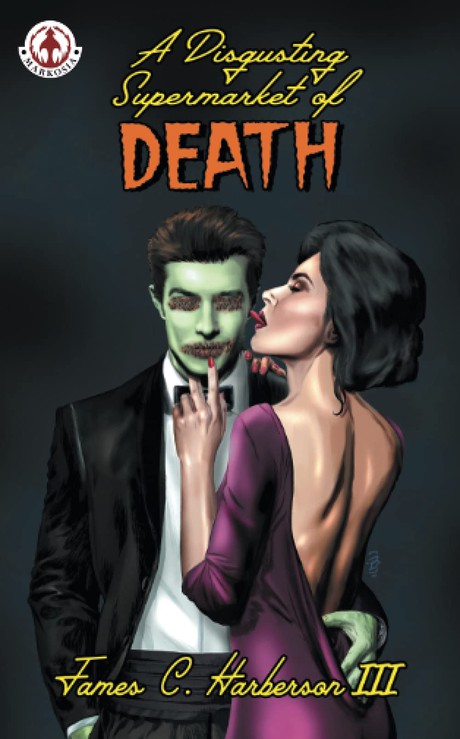 Until next time, stay true to yourself!