Hey there fellow horror geeks and monsterphiles, Prometheus here! Welcome back to FRIGHT FIGHT FRIDAY! Today is the first round of our Evil Spirits bracket semi-finals, BAAL VS PAZUZU! Both are extremely powerful demons but only one can remain to move on!

If you’re new to the series click here for a quick rundown of the rules! Click here and type in FRIGHT FIGHT FRIDAY to catch up on past fights!

As always with semi-finals and finals, I will keep the intros shorter, being that both fighters have already been introduced in their prior fights. Let’s get down to business! 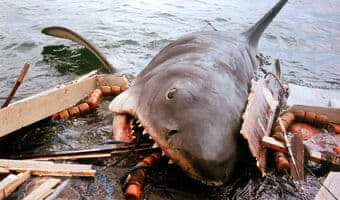 I said it before and I’ll say it again here, Baal is seriously bad news. One of, if not the most powerful demon in Hell next to Lucifer, this dude is no joke. Seen in the film The Rite, Baal is known as “the Great President of Hell.” 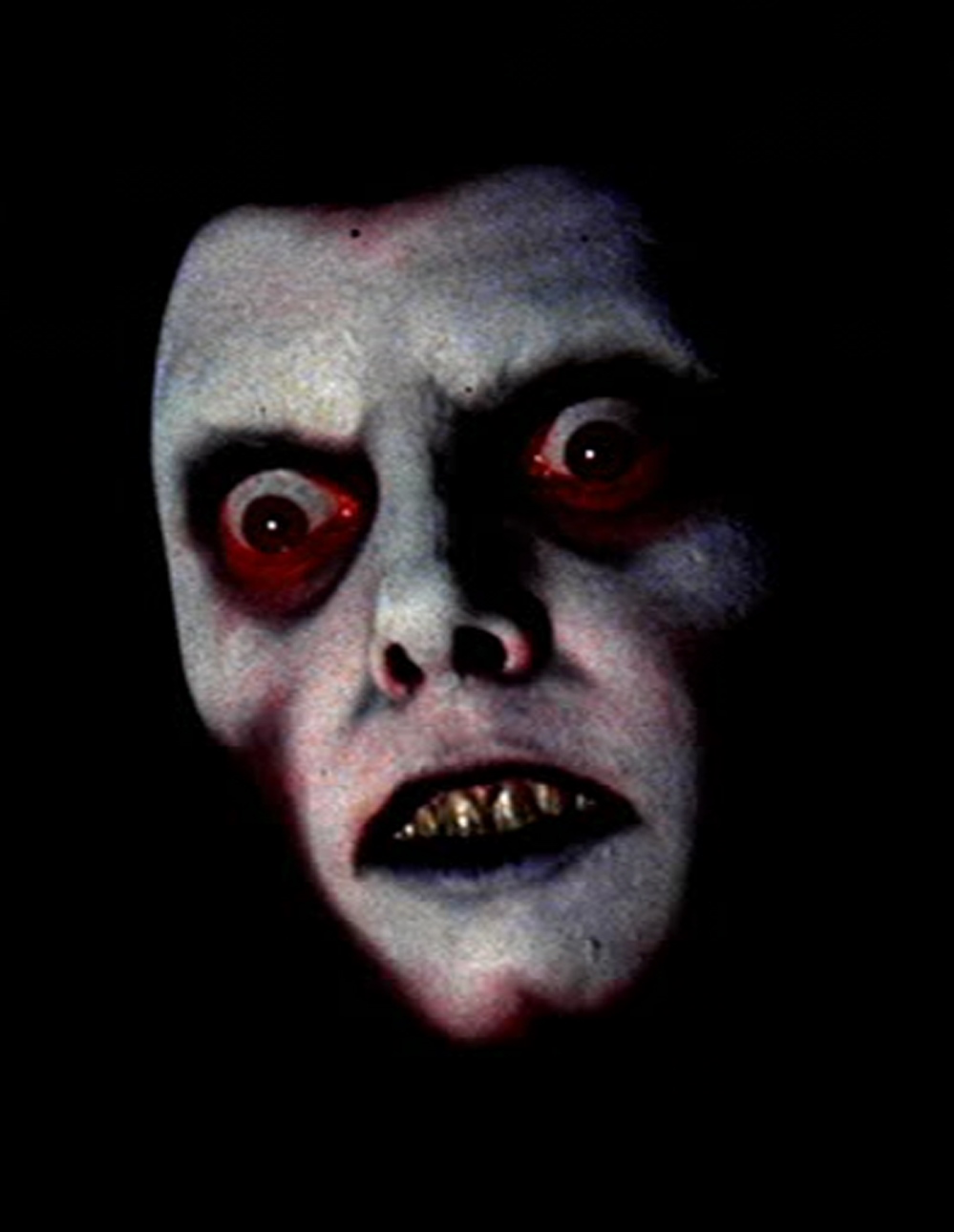 Everybody’s favorite demon, Pazuzu from the Exorcist is a severe problem. The unique thing about Pazuzu’s actual mythology is that he can be summoned to ward off other evil spirits. That’s right, other demons fear this guy.

“Jen?” Her voice is shaky. Her words cracked and broken. “It’s me, Sarah. We’ve been friends since we were 4 years old, do you remember?”

“Help?” Jen scoffs at the idea. Her voice is deep, layered, and not her own. “What makes you think I need help?” She looks at Marcy, her eyes cold and black. With a raise of her arm, she sends Marcy flying into the wall, then focuses her attention on Sarah.

Marcy stands up and as Jen is approaching Sarah, she grabs her by the arm and jerks her hard. “Let’s go!”

Sarah looks back at what used to be her friend, then her and Marcy makes a run for it. Jen follows behind slowly stalking them, laughing as she drags her feet. Her face looks less recognizable by the minute, her cheeks now sunken in and her eyes black with reddish bags under them.

As they make their escape, Marcy bends down and grabs the Ouija board and planchette off the floor.

“Shit, the door won’t open,” says Sarah as she tries opening it.

Sarah follows her to a door in the hallway. “The basement?”

“You got a better idea?” Marcy looks back at Jen who is gaining ground on them quickly. After entering, Sarah shuts the door behind them and latches the hook lock. A relic from back when Jen’s adoptive dad would try and keep her out of the basement while he was working down there.

Once down the stairs, Sarah tries opening the bulkhead but it’s rusted completely shut and won’t budge. “Shit!” She turns to Marcy, pointing to the Ouija board in her hands. “Why did you grab that stupid thing?”

“I don’t know.” She places the board on the floor with the planchette on top of it. “I figured maybe if it got us into this, it could get us out of it.”

“Marcy, I swear to God if you touch that…”

Her sentence is cut off by a loud bang coming from the top of the stairs, then another. The door. Jen was throwing herself against it.

“What else are we going to do, Sarah? Because that lock isn’t going to hold and once it goes, our old friend up there is going to come down here.”

“Do you? Do you know what she’s going to do when she gets down here?”

“Going to fucking kill us, Sarah! Both of us!”

Another bang on the door, louder this time, causes Marcy to make up her mind. She bends down and places her hand on the planchette. “Are there any spirits out there who can hear me?”

Lightning flashes outside as Jen slams into the door again. The planchette moves to the word “Yes.”

“I need to be powerful. Can you help?”

Again, the planchette moves to the word “Yes,” after circling the board.

Another crash against the door sends it flying open as the flimsy lock finally gives way. Jen laughs in two voices at the same time, one that is her own and one much deeper, as she slowly makes her way down the stairs.

Marcy’s body jerks, her head flings backward and her spine contorts, arching back. Her arms reach for the floor, holding her weight up as Jen approaches.

“Yup…” Sarah looks at the two of her friends, then throws her hands up in the air. “Fuck this, I’m out.” She runs for the stairs as her friend formerly known as Jen watches Marcy stand upright again. Her movement is unnatural but smooth.

Marcy turns slowly, looking at Jen. “I am Baal! The Great President of Hell!” She raises her arms, instantly causing the walls to catch fire.

Jen laughs maniacally. “That’s cute, but you have no dominion over me.” Suddenly, a wind blows around the room, putting out the flames. “I am Pazuzu, and you should not have come here.” The winds pick up speed and send Jen flying into the water heater, spilling the scalding liquid over her face and body. Blister form instantly.

Jen, unphased by her boiling flesh, reaches up, popping a blister on her left cheek, under her eye. As pus drips from the wound, she picks up a piece of broken metal pipe and swings as hard as she can, hitting Marcy in the face and jerking her head back. Marcy cracks her neck, leans forward, and spits out a few teeth.

“You’ll need to do better than that, Pazuzu.” Blood leaks from her mouth as she speaks, staining her chin.

Jen plunges the pipe through Marcy’s stomach, laughing as it pops out her lower back. Marcy staggers back a few steps, then forms a bloody smile as she slowly pulls the pipe from her gut. The wet sounds of her flesh tearing can be heard over the rain.

Marcy raises her arms, setting Jen on fire this time. Her clothes are consumed first, then her hair. Soon the smell of burnt skin fills the basement. Jen charges at Marcy, grabbing hold of her tightly allowing the flames to spread.

Once Marcy (Baal) is engulfed, Jen (Pazuzu) calls the winds once more, sending her enemy flying into the oil tank. The winds circle Jen, putting only the flames surrounding her out. Her body is charred and black, but mostly intact.

She directs the winds to the bulkhead, blowing it open, then turns to Marcy. “Go back to Hell, Baal.” As the winds combine to carry Pazuzu from the basement, the oil ignites in a fireball of destruction. Marcy’s body is shredded to pieces instantly as the house collapses onto the foundation.

Jen is carried into the air by the fierce winds. As she hovers 30 feet above the ground, the amulet suddenly stops glowing. As Pazuzu leaves her body, she crashes hard to the ground. The rain feels like needles as it bounces off her severely burned skin. As lightning brightens the sky, she lets out a lone, blood-curdling scream. 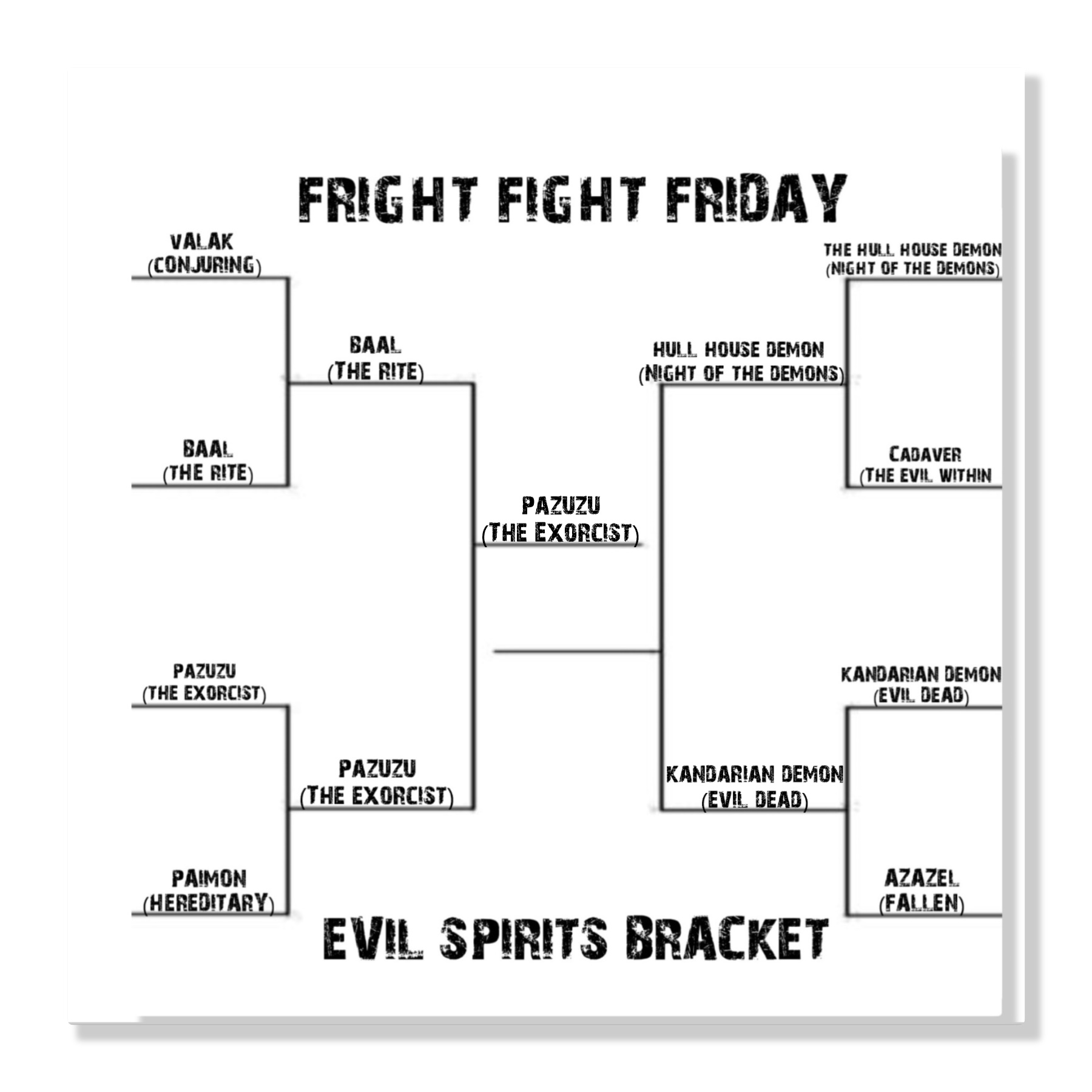 Baal is a very powerful, demon. I can’t see him defeating Pazuzu though. Sure, Baal is “The Great President of Hell,” but he would hold no power over Pazuzu. Pazuzu was a Mesopotamian demon, and a king himself.

In the end, Pazuzu wins. Obviously, I took a few liberties with how Baal was conjured, but it flowed with the story. What do you think out there? Am I way off? Yell at me in the comments and tune in next week for the Evil Spirits bracket semi-final round #2, THE HULL HOUSE DEMON (Night of the Demons) VS KANDARIAN DEMON (Evil Dead)! Until next time, keep on geekin’ on my friends!