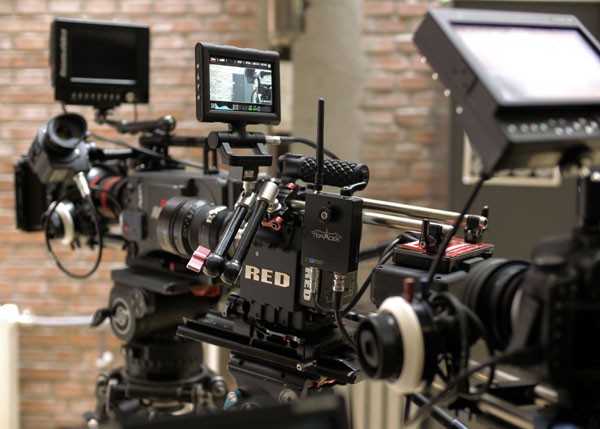 A few articles back, I argued that NIGHTMARES IN A DAMAGED BRAIN is one of the most disturbing film I've ever seen.  I received plenty of alternate selections from friends and associates; SALO, A SERBIAN FILM, and MARTYRS were probably the three most frequently mentioned.  While wholly understanding the validity of these viable contenders, I kept coming back to the fact that NIGHTMARE is, in terms of production value and execution, only a hair's breadth away from the pornography of the early 1980s, and exudes such a sweaty, oily, grungy nastiness that I'm hesitant to handle my VHS copy without washing my hands immediately afterward.

A SERBIAN FILM, by contrast, was shot on the RED, a 4K camera that lovingly displays every pore in a person's face.  This level of detail can definitely be used to great effect in Horror, but it's so far removed from the low-quality, messy, blurry film stock we typically associate with the genre as to be almost another expression of the medium altogether.  Films shot at twenty-four frames per second look more like surreal dreams than real life; high-definition inches us that much closer to the everyday and mundane aspect of our waking world.

So with all that regurgitated: in what presentation does Horror work best?  Let's have a historical look at the paradigm shifts resulting from technical evolution:

Is this progress?  With each new technological advancement, academics have declared the death of Film as an art form.  Hyperbole abounds.  However, it certainly raises questions.  Why, for example, are fans of THE TEXAS CHAIN SAW MASSACRE so quick to denounce Marcus Nispel's 2004 remake, which is arguably a better-made film than the original, if only by virtue of the money and resources available to the filmmakers?  The 2009 reimagining of FRIDAY THE 13TH was decried as soulless, despite the fact that, if you want to get down to it, it’s probably the only movie in the series that feels in any way competent in terms of overall presentation.

Even the classiest Horror film is a victim of its own categorization.  With a few rare exemptions, the genre is often dismissed by critics, and almost always ignored by the awards shows.  From its earliest days, Horror was considered a product designed to thrill rather than to engage in any sort of meaningful way; later it would become largely associated with exploitation due to the content of the time.  The gritty and very raw nature of low-budget filmmaking had a lot to do with this sort of casual dismissal, because, for the most part, Horror films have had a tendency to look second-rate.  Fans have never complained that NIGHT OF THE LIVING DEAD is unwatchable because of its occasional soft focus or heavy grain; compare that to modern films.  Isn't it interesting that a casual viewer is more inclined to watch — ironically or no — a shoddy-looking Horror film, more so than a different genre executed with comparable quality?

Modern video has thrown that quality into the desktop trash bin.  I wrote a lengthy piece in my STAR WARS series, praising George Lucas for having pioneered the high-definition technology that allows a low-budget independent filmmaker like myself to create films that look like studio product; in 2019, it’s just about the only way to ensure your movie will be seen.**  This is a double-edged sword, though.  The very fact that an indie now has to look like a mainstream release is due to the very existence of high-definition video, which was first embraced because an indie film didn’t have to look like an indie.  One cannot now be separate from the other.  It makes the head swim to think about it that way.  Nonetheless, this visual upgrade brought that missing respectability into any movie constructed with even the most basic level of competence (and sound design of equal quality).

But what did this mean for Horror?  If the genre is best defined by its haunting and evocative, 3am quality, don’t those high-definition pores I mentioned iron out the surrealism?  Every film is (hopefully) designed to lure you into its world and immerse you in its unfolding narrative.  If Horror is the stuff of terrifying dreams, then what kind of effect is possible when the dreamscape is rendered ordinary and mundane?

A lot of this depends on subgenre. I mentioned a few examples of slick(er)-made Horror films, and that’s setting aside major studio pictures.  No matter how violent those other films may be, they still look slick and packaged.  MARTYRS and SALO and INSIDE all look scrubbed of dirt, even if the content isn’t.  NIGHTMARE looks oily and contagious.  The literal blurring of lines crates both a level of distance and competing intimacy, and perhaps it's this dichotomy that helps create a level of disconnect, or “wrongness.”  Perhaps life was never meant to be viewed through such a filter, and in doing so, we become troubled; watching a dude get an axe in the face is what sends us screaming over the edge.

Hop on Amazon Prime and go to the Horror section.  You’ll likely have to scroll a ways to find anything you’ve ever heard of due to the sheer glut of product that independent film has given way to, and we have that pesky digital camera to thank for it.  Shooting on film is cost-prohibitive, so it’s almost unfair to ask a filmmaker — especially one working with minimal resources — to refinance their home so that they can rent 35mm cameras, and then shoot in a format almost no one will ever notice, and certainly never care about.  I say almost no one because film nerds will recognize the absence of visual patina, but the casual viewer doesn’t give a shit.  So go ahead and scroll, and let me know when you find a new-is Horror film that doesn’t look the way quote-unquote Respectable flicks of the genre were trying to look twenty years ago.  Then give a few of them a watch, and tell me if they have any sort of psychological effect on you.  If they don’t, the first thing I’d point to is the ambience, which is more or less bled out by virtue of the very cold degree of heightened detail and accentuated reality.

Does "better made" equal “better"?  Does progression within a medium benefit Horror the same way as a Comic Book Movie?  Can the genre truly be scary again when we know it's just a movie?  The answer is always yes, assuming the filmmaker is using his or her resources to compliment the story being told.

*Movie is an adorable term when you actually stop to think about why films are referred to as such.

**Read that article here if you’re interested in the history of the high-definition camera, and how it impacted filmmakers working with shoestring budgets.