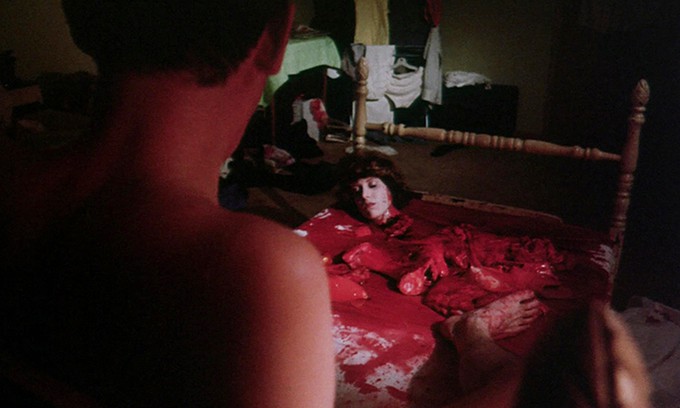 Romano Scavolini's NIGHTMARE (aka NIGHTMARE[S] IN A DAMAGED BRAIN, aka BLOOD SPLASH, aka SCHIZO) is the one of the most disturbing Horror film I've ever seen.

Let me try to put this in the proper context.  I would advise that you stop reading now if you're of delicate temperament.

TRUE STORY:  Many years ago I was at a party, and long after midnight, when values became fuzzy and judgment questionable, a guest put on a tape from his private collection.  Thus I can report that there exists, somewhere out there, video footage of a middle-aged, Rock-Bottom Drug Addict who, presumably desperate to score her fix, agreed to participate in an amateur film in which she copulated with a small dog.  Given their relative height difference, the dog – standing on his hind legs, forelegs braced on the small of the woman's back – continued to slip out of position.  The woman, clearly distressed and realizing that No Finish means No Crack Money, desperately (and repeatedly) helped the dog regain his footing, as all the while his claws were tearing her hips into bloody ribbons.  She didn't seem to notice.  Her focus was elsewhere.

NIGHTMARE is, for me, the second most fucked up film I’ve seen, then.*

How do I describe this for someone who hasn't seen it?  It's an early-80s exploitation film about a guy named George Tatum (Baird Stafford) who's released from the institution where he was being treated for a mysterious, post-traumatic stress disorder, and one which manifests in the form of night terrors involving a dismembered woman in his bed.  He's on experimental anti-psychotics, and his discharge is for the purpose of monitoring his presumed reintegration into society.  However, he stops taking the meds, goes on the lam, and begins a journey from NYC to Cocoa Beach, where he's obsessively stalking the equally disturbed pre-teen son of a truly bitchy single mom.  What's the connection?  Why this family?  What trauma did George experience to give him these nightmares, which begin to unfold with more and more detail (and horrifying imagery) as the film progresses...?

From that description, it doesn't sound particularly special – certainly not equal to, or surpassing, Dog Fucking.  But this is truly a film that needs to be experienced, preferably on VHS.  NIGHTMARE is a perfect storm of filth, from the story, the production values, the acting, and the score.  Being a low budget Italian-American exploitation flick, it puts sex front and center, but not in a typical Slasher T&A sort of way.  These are boner-wilting levels of perversion, shot in such a way that gives the viewer the impression that every scene was filmed through a lens greasy with the residue of errant semen.  This isn't slick and polished like MARTYRS or INSIDE: it looks, smells and tastes like a by-the-hour motel where you're afraid to sit down or touch anything.  By comparison, SALO plays like a European art film, and very competently made, which dulls the edges.  NIGHTMARE looks like the sets were sticky, and CPS had to be called in after it was realized that there were children involved.  It's literally on the same level as porn of the era, from the incompetent performances to the traumatic jazz that accompanies the histrionic acting; only there's no Wah-Chicka-Wah-Wah swagger to a sequence with a mentally ill character, literally foaming at the mouth in a beat-off booth while a stripper masturbates, screaming at him as she reaches orgasm.  By the time you get to the Act One turning point where George knife-fucks a girl, sobbing as he simultaneously ejaculates into his pants, you realize you may never want to have sex again for any reason.  Seriously, DANIEL & ANA is more arousing than NIGHTMARE.

It’s important to note that NIGHTMARE was one of a series of films categorized as “Video Nasties” by the British Film Board, who refused to rate and allow release of movies of questionable taste.  While the most famous of these is THE EXORCIST – a film that remains not only one of the classiest mainstream Horror films, but almost completely unrelated to the others on the BBFC Kill List in terms of prurient appeal – the rest are utterly, wonderfully trashy.  An astounding seventy-two titles were labeled obscene and therefore harmful to viewers (particularly children); eighty-two subsequent movies were added as being less reprehensible, but fucking awful anyway.  We have DRILLER KILLER to thank for providing the inciting motivator to suppress Horror films, but CANNIBAL HOLOCAUST was the one that truly cemented the movement.  Prosecutions followed, and guilt by association followed.  Even without the benefit of hindsight, it’s hard to reconcile THE EVIL DEAD winding up alongside MAKE THEM DIE SLOWLY and ZOMBIE FLESH EATERS, but Horror’s bad rap extended to milder works that seem almost quaint by comparison to anything directed by Mario Bava or Lucio Fulci.

Make no mistake: censorship sucks, but these flicks were – and are – hard to watch, because they’re not trying to scare you; they’re trying to make you sick.  They’re successful in that regard, though any illness experienced varies from viewer to viewer, being in some cases physical, and in others, psychological.  NIGHTMARE is particularly abhorrent in its violence, and contains what I consider the nastiest, most tasteless and irredeemable murder scene in the history of film.  The entire movie builds to it: we get bits and pieces from George's POV throughout the narrative, but it's only once we reach the last five minutes that Director Scavolini unveils the entire, awful sequence.  Tom Savini sued the production for falsely crediting him as the guy who designed the kill(s), then being at the height of his notoriety and thus another resource to exploit when trying to reach an audience of young gorehounds; despite his claims to the contrary, photographic evidence exists that proves he was indeed on set giving FX direction.

So why would he refuse to have any association with NIGHTMARE?  Well, opinions vary, though all one has to do is watch the fucking movie for yourself and ask if you'd want to be credited** for it, either.  The cummy icing on this three-day-dead-prostitute of a film is that the scene in question involves a child, making it all the more disturbing to realize that some poor kid had parents who read this script and said, Yes, this would be GREAT for little Scotty's career, and will doubtless open many professional doors!  Meanwhile, said "professionals" are ultimately revealed as therapists, and the doors lead into offices with couches perfect for stretching out on during a powerful emotional breakdown over your horrible, emotionally abusive childhood.

NIGHTMARE is available complete and uncut on YouTube.  It’s otherwise hard to find, though various small-scale restorations have been released with varying degrees of quality.***  Don't skip right to the infamous five minutes that cap the film – you need to marinate in this sewage for the entire run in order to fully appreciate the nauseating quality of the climactic reveal.  I'm not gonna lie: I've seen NIGHTMARE at least a dozen times over the past twenty-five years, and I keep coming back to it.  There's a power to the film.  Yes, I realize CANNIBAL HOLOCAUST kills real animals, but I'll take a Rainbow Turtle being torn apart over that inexplicably hair-raising "Peter & The Wolf" pan flute theme that’s connected to the twisted little kid who's the focus of George's obsessive stalking.  Again, this is a movie where on their own, the elements are simply what they are, but when married to one another, become something absolutely exploitative and grungy.

So watch it, preferably at four in the morning after a night of drinking, and then go to sleep shortly afterward.  Let me know how you're feeling when you wake up.  I'd be willing to bet that watching a nice, wholesome Dog Coupling video will sound like a real palette cleanser.

***I recommend watching it, preferably not on YouTube if possible, because you’re stealing money from filmmakers’ pockets every time you do so.  These things cost money to make, folks.