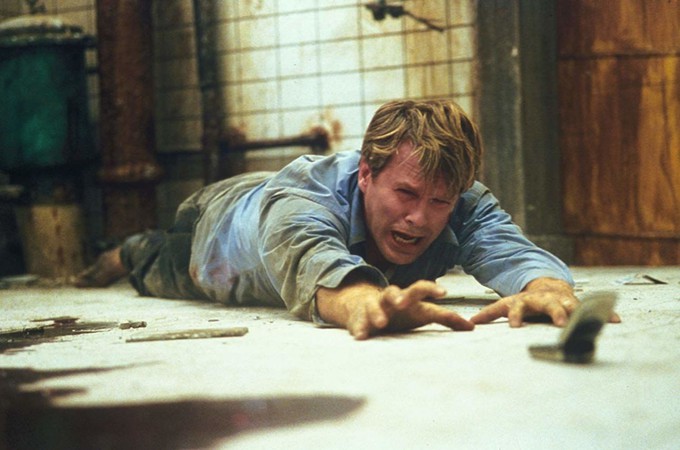 Cell phones!  Everyone's got one! Car breaks down? No problem -- dial 311 for assistance!  Homicidal killer chasing you in the woods?  The police are three digits and a SEND button away!  And when you get the feeling that your parents -- and the entire community -- are hiding the possibility that there might once have been a serial killer prowling the neighborhood, looking for kids to fondle and then cut to ribbons (until they decided to form a vigilante mob and burn him alive, of course), all you gotta do is open your Google app and type the word SPRINGFIELD.  Be sure to include whatever first and last name were written inside the hat you pulled out of your dream.  Chances are, you might find what you’re looking for, as well as related info on that Haddonfield weirdo in the Shatner mask.  Thanks, internet!

It's really hard to come up with a plausible Horror movie premise these days given the restrictions enforced by accessible technology.  One of the chief themes of the genre is isolationism: whether it's because no one believes the crazy shit you claim is happening to you actually is, or because you're literally cut off from help or escape (or weapons) in a rural environment.  Being stranded, and alone, while danger lurks ust around the corner, and no one can help you: that’s Horror.

Or at least, it was.  We now live in an age of Facebook, of Twitter, of Instagram.  We can "check in" and achieve Mayorial status at restaurants (whatever the fuck that means) using some truly stupid thing called Foursquare.  When hunting for the Blair Witch, it becomes that much harder to get lost in the woods thanks to Google Maps, magic influence or no.

Whether you like the applications or not is irrelevant: what matters is that we're constantly leaving a trail of bread crumbs that connects us to everyone around us.  I'm not so naive as to suggest that kidnapping, rape and murder are statistically lessened by wearing an iPhone on the hip, but from a storytelling point of view, it's a lot harder to believe that a vanload of 2019 teenagers are going to run out of gas, get stranded, and end up hanging from meathooks.  "Hey guys, instead of going up to that big, creepy farmhouse with all the taxidermy, let's just use Maps to find a gas station."  Suddenly, the unfolding mythology of PANANORMAL ACTIVITY becomes that much smaller, as the threat of suppressed knowledge is reduced by the fact that anyone can learn (almost) anything, instantly.  The people of Derry, Maine, might be supernaturally influenced to look the other way as a giant, pregnant spider lures children into the sewer by dressing up as a clown, but the folks in nearby Castle Rock might read the news with a less compromised eye.

And it's not just Google: it's Wikipedia, too.  You can read the newspaper on your phone if you want, and search for old news clippings.  That trip to the library for arcane texts, or poring over old Microfiche, is suddenly reduced, if not eliminated altogether.  We no longer live in an age of secrets.  Everyone's dirty laundry is airing in real time!  There are entire web sites devoted strictly to the sordid histories of every murderer that's walked the earth, with instant access a swipe of the thumb away.  It becomes hard to believe that anyone would bother going to Crystal Lake when Jason Voorhees would be one of the most infamous names in American history.  Dude would have his own Facebook Fan Page, if not a personal account.  Sure he might not post regularly (and since we know he’s non-verbal, he’d probably have little to say), but at least we’d see photos of what he’d had for lunch on a given afternoon, or have IN MEMORY OF MOM memes to Like on Mother’s Day.

There was once an innocent time when Van Helsing had to sit the Fearless Vampire Killers down in a parlor and explain to them the details of the Undead: their powers, their weaknesses.  Scenes where our intrepid teens thumb through card catalogues (!) or Jack Torrance had to unearth old newspapers in the Overlook basement (!!) in an effort to discover The Answer To The Mystery.  You don’t even have to acquire a copy of The Rituale Romanum when there’s a demon in the house; the rite of Exorcism is online.  Samara’s creepy video is probably on YouTube, alongside the footage from THE LAST EXORCISM, REC, and similar “found footage.”

And how did the masked murderer traditionally deal with those pesky phones that rarely seemed to work, anyway?  He cut the line outside the house, leading to that moment where all the kids inside jump, with the Survivor Girl wailing He's here...! He's here...!  It was a simpler era, and one in which Leatherface didn’t have to obtain the teens’ AT&T passwords and select STOP PAYMENT in order to obtain material for a few new body suits.*

Now? Check out remakes and re-imaginings of classic films, even the ones less than twenty years old, to see how far and how fast the cell phone has become such a part of our lives, such that we can't tell a story without it.  I would point to the NIGHTMARE ON ELM STREET remake as a perfect example, given the original’s conceit of dirty laundry behind the white picket fences of Anytown, U.S.A.  The notion of a shared community secret is rendered impossible by virtue of the fact that Freddy Krueger’s heinous crimes would be a part of the public consciousness, along with his sudden, inexplicable disappearance.  The greater likelihood is that Nancy would turn up a selfie of her Mom at the neighborhood cookout, accompanied by a #ThinkOfTheChildren, or maybe just an LOL.

Sometimes Science Fiction becomes Science Fact.  The cell phone has its origins in, of all things, STAR TREK; Kirk and his crew used their handy flip-phones to communicate on alien worlds, and when they needed to ensure they weren’t violating the Prime Directive, they could call up a database of info, right there in the palm of their hands.**  Even computers or data discs were the stuff of fantasy, and now just as regular as…computers and data discs.  We continue to move forward as a technologically advanced society, which is great for ordering crap on Amazon, but it continues to shine a light on previously dark corners, scaring the monsters away.  Their hiding places have become progressively limited.***

As such, it's backed Michael Myers, Leatherface, and all their writers, into a corner.  The lengths in which filmmakers have to sometimes bend over backwards to incorporate the internet as a plot device can be eye-roll-worthy at best.  Note that cell phones are rarely seen when they’d be most useful, which is unlikely given that you can’t get anyone to turn them off and stop scrolling, even in the fucking movie theater where these films play out.  Sometimes the writers rise to the challenge and come up with some clever ideas, but typically there has to be a contrived sequence involving some schmuck dropping his phone down a hole, or cutting off his own foot because he never thought to use that saw in his hands to grab the phone just out of reach, or – wait for it! --announcing that his battery's dead.  Of course it’s dead.  And if it isn’t, there’s no signal.  Apple products are apparently as unreliable as automobiles when a monster's chasing you and you're trying to get the goddamn engine to turn over.

As it's always been: Science defeats superstition, and nudges fantasy out the door every time.

*It would make for a great scene, though!

**Motorola scientist Martin Cooper used STAR TREK as an inspiration when creating the first cellular device in 1973.  I think we can all agree that it took Zack Morris to make us all aware that these portable phones were a reality, even when nothing else around him resembled such.

***The one story to truly address the fading of monsters in a less superstitious world was, of all things, Dracula.  Stoker’s bloodthirsty Count was enamored by the scientific progress of the Western world, and wished to be a part of “the whirl and rush of humanity.”  His relocation from Transylvania to London was driven by this desire to experience such things as typewriters, primitive wax cylinder-based recording devices, and early cinema.  As in The Exorcist, the story’s theme becomes one of abandoning Science and returning to the Old Ways, as a decreased social emphasis on religion granted Evil a place to fester among us.  Only by rejecting skepticism and a reliance of modern practicality can the supernatural be accepted, confronted, and eliminated.