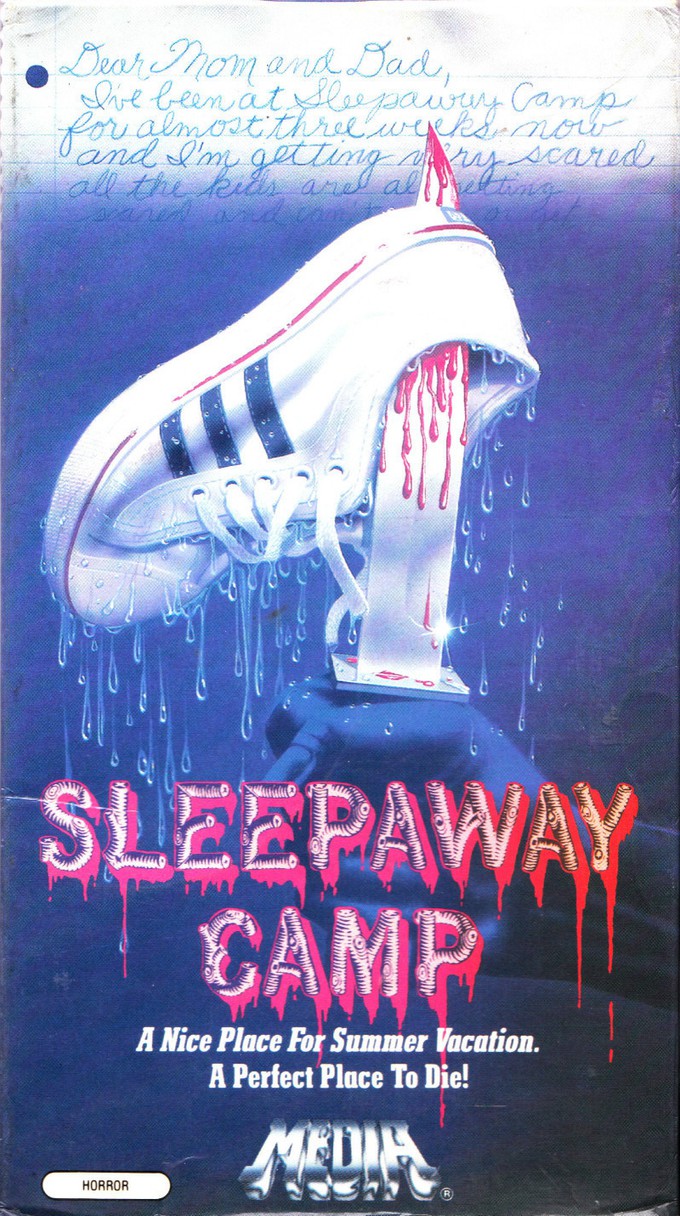 I opined at length about the dearly-departed Video Store in a previous article; for those who weren’t there, spoiled as you are by Netflix and Amazon Prime, you can’t possibly hope to understand the gateway to discovery those privately-owned venues offered.  What I may not have mentioned as I wrote longingly of tantalizing VHS boxes and their non-Photoshopped cover art and creepy potted plot summaries, was the equally-luring presence of Horror movie posters taped up on the wall behind the front desk.

Again: I’m talking Mom & Pop stores, here.  If you’re thinking in terms of Blockbuster Video, you’re probably remembering those same TRUE LIES cardboard standees that Carol Danvers encountered in CAPTAIN MARVEL.  It was appropriately Corporate.  The hole-in-the-wall stores were different, though: they were operated by the same sort of stoner kids who also ran the local Comics store, and the aesthetic was similar.  There was a certain ramshackle nature to the organization, and the in-store TV was typically showing some film that was (technically) inappropriate for young eyes such as mine; to prove a point, the VHS would be switched the moment the owner walked through the establishment door.  I can’t possibly count the number of times a pre-teen Erik — venturing to the store alone with his Mom’s rental card and five five dollars in hand — would ask the very baked clerk which film was playing.  It’s called EVIL DEAD, kid.  It’s fucked up.  You should check it out.  I always did.

But the posters were nearly, if not more, effective, and high among the images that every kid of the era remembers is the cover art for SLEEPWAY CAMP.*

That poster drew us to in search of the box and accompanying description.  We all saw the tape on the shelves, and none of us had any idea what the hell it was.  No memory of TV commercials; no lurid descriptions of key sequences from classmates on the playground (which themselves were usually derived from what an older brother or sister recounted from their weekend at the Movies).  Yet there it was.  You had an appropriately kill-ready knife, center-frame, with a bloody, skewered tennis shoe wriggling upon the blade.  This striking image was set against the backdrop of a handwritten letter home from some unfortunate child, whose otherwise banal summer experience of hiking, swimming, and arts and crafts, had been somewhat compromised by the presence of a homicidal killer.  It was a painted cover that told you everything you needed to know without actually telling you anything at all, to put it mildly, and cunningly evoked FRIDAY THE 13TH, which was still a major box office draw in that pre-NEW BEGINNING period.

But why hadn’t most of us heard of SLEEPAWAY CAMP?  The notion of “direct-to-video” was still a new one, and independently-produced films hadn’t yet achieved the Cool Factor that 90s auteurs Kevin Smith and Questin Tarantino would later establish; at this point, the Weinsteins were still dabbling with comparably small films like THE BURNING — itself being a modest Slasher.  SLEEPAWAY CAMP might have received a limited theatrical release, but home video was clearly its target, and it hit the bullseye as surely as a fantastic arrow-though-the-neck effect.  The promotional art was sufficiently vague, and the premise was derivative enough to ensure rentals…but the ending.  Jesus Christ, that ending.  If ever there was an ultra low budget Word of Mouth Horror movie, it was SLEEPAWAY CAMP, and we all know the reason, even those of you who haven’t experienced it for yourselves.  By the way, shame on you.

Unlike movies that approach their twist endings with artistry and grace — PSYCHO and THE SIXTH SENSE standing tall among the best examples of their kind — SLEEPAWAY CAMP is a WTF Scene retro-engineered into a feature-length film.**  You can literally imagine director Robert Hiltzik having an A-ha! Moment and then wondering how he could create a movie around the concept, with a grand total of ten bucks to throw at its execution.  The premise is simple: cousins Ricky (Jonathan Tiersten) and Angela (Felissa Rose) attend a summer camp, and poor Angela’s awkwardness makes her the victim of Lady-led bullying; one by one, her tormenters die in gruesome ways.  Is shy, mousy Angela the killer?  Is it Ricky, whose mouth and violent disposition are constantly landing him in trouble?  Both of them?  Neither one?  If you’re concentrating on this element (as you’re clearly supposed to), you’ll be completely unprepared for the actual reveal, which renders the standard Whodunit element a clever bit of misdirection.  Rarely has a film so successful pulled the rug out from under the feet of its home viewers, to say nothing of the actual living room itself.

Note that I’m praising the film for its conceptual artistry.  It also happens that SLEEPAWAY CAMP is so appallingly inept a production that it's near-legendary in its badness, raising the question of whether the previously-mentioned execution of misdirection is an accident rather than an example of creative deftness.  SLEEPAWAY CAMP is terrible in nearly every other respect, but endearingly so.  Make no mistake: this is a wonderful movie.  Maybe it's the terrible New Jersey child actors (actual kids in an 80s Slasher about a summer camp...???), or the technical crudity that clings to all aspects of the project like soot (check out the editing during the opening boat accident).  Maybe it's the fact that Hiltzik thought it would be a good idea to dedicate this trashy exploitation flick to his mother (!), "a Doer" (!!).  It's also immensely quotable.

This isn’t even touching the fact that the movie is fucking mean.  It's just awful.  You've got the lecherous cook who leers at all the underage meat arriving to camp (“Where Icome from, we call them Baldies”), and Teen counselor Meg (“M-E-G”), who is endeavoring to bone her sleazy, senior citizen boss.  Most gloriously reprehensible is the demise of the perennial Bitch Girl character, Judy, who dies via the introduction of a curling iron to her Mommy Passage.  Watch SLEEPAWAY with your girlfriend, fellas; if you don’t find her resistant to coitus afterward, there’s probably something wrong with her.***

Every character swears and hates and swears and hates — just like a real summer camp, only with counselors who hit the campers, and a killer who locks his/her victims in toilet stalls with active bee hives.  It's funny.  Really funny.  And you know it's not supposed to be, which makes it funnier.

But that ending.  Jesus Christ, that ending works.  Admittedly, it’s badly staged, and the presentation is rather unconvincing; but anyone who can watch that particular sequence unfold and not feel the immediate need to shower afterward must enjoy skinny dips in the septic tank.  Perhaps its effect is enhanced by the overall nastiness of the unintentionally gut-busting events leading up to it.  If so, you have to shake your head and wonder what's wrong with Hiltzik if he can't just put a machete through a wheelchair kid's face and push him backwards down a flight of stairs like those nice FRIDAY THE 13TH people did.

There were two direct-to-video sequels, the first of which — UNHAPPY CAMPERS — lured renters less by evoking the sensationalist aspects of its predecessor than by featuring such familiar iconography as Jason’s hockey mask and Freddy’s glove on the cover; apparently, Rose’s replacement, Pamela Springsteen, wasn’t considered a big enough draw based on the connection to her more famous brother.  Hiltzik was involved with neither of the back-to-back productions, nor with an abandoned fourth entry, THE SURVIVOR, which features shot-on-video production values just slightly below amateur porn of the era.  The original creator did, however, return for an official sequel, RETURN TO SLEEPAWAY CAMP, which was only released in 2008 after several years of funding-related delays.  It’s appropriately histrionic in terms of acting and general characterization, but the attempt to pull another shocking Third Act twist is so weak as to come off as pathetic.

SLEEPAWAY CAMP is a product of a very specific time — one in which the Video Store ruled, word of mouth created buzz, and an article like this would force you to actively seek the movie out and then watch the entire tape instead of just searching for clips on YouTube.  It was a wonderful time in which we could all eat shit and live, and be happier for it.

*So effective, in fact, that I have to wear the T-shirt every chance I get, even when it’s posing for a WRNR radio station promo, as seen here.  I can’t tell you how many times I’ve stopped at a gas station, or gone to pick up a pizza, and had someone lose their mind over the fact that someone else in this world has seen SLEEPAWAY CAMP, and clearly loves it enough to wear it’s box art on their chest. 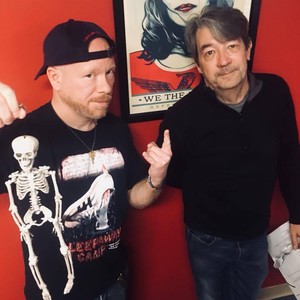 **I attempted a twist ending in my first feature, ROULETTE.  I go back and forth on its effectiveness, and whether or not I telegraphed it too much; or whether it comes too far out of the blue given the film’s genre, and the tone previously established.  They’re difficult to pull off correctly, and only tend to work when they recontextualize the film you’ve just watched.

***Not that there’s anything wrong with that, if you take my meaning.