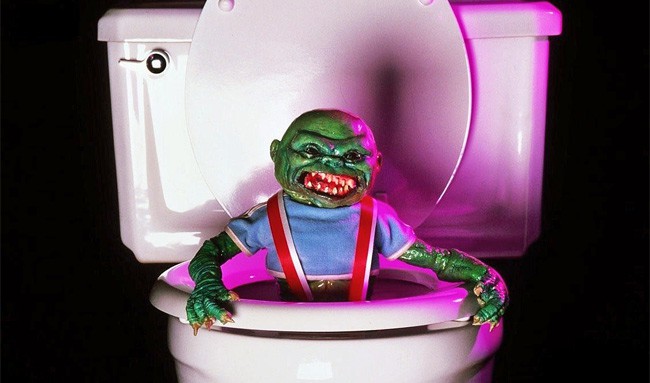 Today we raise our glass of pumpkin ale to the dearly departed cinematic libraries of yesteryear:   the Mom & Pop Video Store.

I’m not talking about Blockbuster, kids.  If your frame of reference is Hollywood Video, you can’t possibly understand what I’m talking about.  When Carol Danvers was depicted crash-landing inside a mid-90s, mainstream rental store, the (older) audience for CAPTAIN MARVEL laughed appreciatively.  It was a nice dose of nostalgia for casual movie fans who can remember going to Erols on Friday night with Mom and Dad to rent TRUE LIES or a comparable New Release.  Trust me, I laughed, too.

But those stores weren’t for me.  It wasn’t my sort of haunt, if you can dig it.  I was spoiled at a young age, when my parents took me to the “downtown” section of Hagerstown to go to THE BIG VIDEO STORE.  There were closer venues for weekend rentals, but THE BIG VIDEO STORE was – insofar as I can remember it – massive.  The shelves seemed to go up, up, up forever, and each aisle was seemingly a mile long.  You could wander those passages forever, and there would still be new sights to be seen.

Every movie ever made was right there, alongside the current stuff appearing on the still-new VHS and Beta formats.  Insofar as consumers were concerned, the VCR was a transformative acquisition, and though the purchase of a film like STAR WARS was cost-prohibitive (something in the neighborhood of $75 dollars, which in 1981 may as well have been a thousand bucks), the rental paradigm opened a collective eye to film as a medium with history.  It was like going to the library, only they charged you a few bucks.  Whatever.  For the first time, you could choose what you watched, and you could decide when, and you could even take a Pee Break without missing a thing.

In a pre-Netflix world, these havens of second-hand product were our gateway to new and undiscovered trash treasures.  Row upon row of video tapes lined dusty shelves, and they screamed to us, begging for our attention, flashing lurid covers that were bound behind the see-through plastic of their oversized clamshell packages.  This was back when Horror movies featured bizarre and wonderfully-painted artwork rather than the glossy, Photoshopped collages we see today.  There was a charming sleaziness to the presentation, and given that Horror has always been considered a mere notch above porn,* there was an almost guilty feeling about browsing those aisles.  It felt like Doing A Bad Thing.

Grab a tape, any tape, and you were bound to see a nightmarish image on the front side, and on the back: a single still frame (or, perhaps, two), followed by a brief plot summary.  Taken as a whole, the experience was more enticing than anything we see today.  The best movie trailer for the greatest film cannot compare to discovering a new video tape, inspecting the packaging, and having to take it home with you.  Maybe you’d have a friend over; maybe you’d stay up past your regular bedtime to watch it once Mom and Dad were asleep.  You’d get your jammies on, grab something to snack on and something to drink, and sit there on the floor in front of the television.  There was a very specific routine involved.

Smudgy video and ugly sound.  Flicker and tracking control issues.  Previous customers never bothered to rewind the tape, so you’d press PLAY, only to see the end credits.**  But the smell when you popped open the case -- the smell of plastic and lubricated tape, a smell that immediately set off this ritual, this journey of cinematic discovery: it was the smell of Friday nights, of sleepovers, and half-remembered nightmares that followed.  Cross-legged there before the flashing idol of transmitted image and sound was a quasi-religious experience.  It was magic, and nothing can replicate that sense of ritual and discovery.

There was always something new to find in these dusty stores, which curiously seemed to have more Horror inventory than anything else – likely because mainstream stores (like the one Captain Marvel fell into) carried only the most basic genre films.  Not here; not at THE BIG VIDEO STORE.  There were tantalizing titles, wholly new even to a kid whose growing fanaticism led him to watch every scary movie available, and read every Daniel Cohen book on the history of Horror he could find.  So much to find! ***

We all knew about FRIDAY THE 13TH and HALLOWEEN, right?  But wait:  there was a SILENT NIGHT, DEADLY NIGHT, too?  MOTHER'S DAY?  A window onto the larger world of exploitation cinema suddenly opened, and I devoured them, old and new.  There were proto-Slasher franchises from yesteryear, like Hammer’s DRACULA cycle, where half the fun was seeing how the Count would be resurrected this time, and how he’d ultimately bite it in the end.  It was the same execution to be found in latter-day Horror sagas, and suddenly, I could recognize these parallels for what they were.  To my amazement, Dracula’s onscreen appearances extended beyond Bela Lugosi, Christopher Lee, and Frank Langella: there was Louis Jordan, and there was also Jack Palance.  This led me to HOUSE OF DARK SHADOWS, where I saw that Dan Curtis had simply recycled the plot points from his cinematic telling of the Barnabas Collins tale, and applied them to his 1973 take on Stoker’s novel; then, of course, this meant I ended up watching every episode of HAMMER HOUSE OF HORROR (all of which were hosted by Elvira), and having particularly unpleasant dreams after seeing “Children of the Full Moon.”  It was glorious.

But wait!  There was that GHOULIES 2 movie I just had to see because the cover depicted a turd-like demon grinning happily from an open toilet.  I found Franco-American flicks like NIGHTMARES IN A DAMAGED BRAIN, or Pure Ragu like THE TEMPTER and ZOMBI.  Joe D’Amato’s BURIED ALIVE was so nauseating and so nerve-wracking that I had to turn it off; the next morning, I rewound the tape, and watched the whole thing.  I made my way back around to domestic products like THE BURNING, SLEEPAWAY CAMP, SPLATTER UNIVERSITY, and other American nasties we never saw commercials for on TV.  There were two IT'S ALIVE! movies to enjoy.  There was also Stephen King’s NIGHT SHIFT COLLECTION, featuring an adaptation of “The Woman in the Room” by a young Frank Darabont; also included was a film school take on “The Boogeyman,” which remains, to this day, the first and only of King’s stories to terrify me.

There were films with gruesome reputations turned legendary through playground retellings:  LAST HOUSE ON THE LEFT and I SPIT ON YOUR GRAVE were the most notorious.  And still more!  The shot-on-VHS masterpiece, HOUSEGEIST.  Paul Naschy werewolf flicks.  HELL NIGHT.  THE LEGEND OF BOGGY CREEK.  Films we knew better than to ask Mom and Dad to let us rent, that we'd just pluck off the shelf each visit, poring over the back-of-the-box synopsis and imagining the gory treasure in our hands.  Oh, my dear, sweet FACES OF DEATH.  If the boxes hadn’t been empty, and the actual tapes stored behind the front counter, I might have swapped the contents with a more innocuous, family-friendly flick to fulfill my mission of actually seeing a guy mauled to death by a bear.

Every store was different.  The one in the shopping center had more Slashers, but the one next to the 7-Eleven had a better selection of the classic Universal films.  The one next to the liquor store had the clerks who didn't care if you browsed the section, but the one downtown always told you that you needed to be accompanied by a parent if you were going to eyeball BASKET CASE.  And every time a new store opened, it was a village to plunder.  New treasures to unearth.  New movies you couldn't wait to tell your friends about on the bus ride to school on Monday morning, always in gruesome – and often embellished -- detail.

Now the stores are gone.  Even major chains like Blockbuster and Hollywood Video died a slow death, with their Horror sections becoming less and less varied.  Those sun-bleached display cases were sold in bulk even before the stores closed their blinds for good, as the coming of DVD swept aside their predecessor like so many fallen leaves.  In a digital age where more content is produced than can be consumed, and where IMDB gives immediate access to every film ever made, the "quest" is no more.  There are few undiscovered treasures to unearth.  And who the fuck wants to see them in 1080p, anyway?  The soft-focus, twenty-four frame per second celluloid waking nightmare falls beneath the sword of the 4K David Fincher-wannabe Redbox snoozer of the week.  The quaint charm of rough-edged low budget cinema, presented in a crummy physical format no less the size than a hardcover dictionary, is no more.

But we have Amazon Prime.  We have Shudder.  We have asshole fuckfaces who pirate low-budget independent films and put them on YouTube to be watched for free, because fuck you to death, Good Sir.  The era of the digital camera and online streaming has made the glut of content overwhelming rather than a new avenue to explore.  There’s no longer a ritual; #NetflixAndChill is the closest we have today, and it’s stupid, because it has a hashtag.  You kids today just don’t get what I’m talking about anyway, so take your goddamn YouTube and stay the hell off my lawn.

But I remember that time in my life, and many of you remember what I’m talking about.  Before eBay; before you could order anything, anywhere, straight from Amazon on your phone.  There was the beauty of searching, and finding, and taking home to enjoy.  It’s a moment in childhood that was formative for so many of us, and built the foundation on which our private obsessions are built.  And yet the moment passes, and time marches on.

But we still remember.

So here's to you, Mom & Pop.  Thanks for so many wonderful memories, and for being a bad influence on this little kid.

*Horror and pornography have a few things in common.  Both genres feature low production values, no-name actors, an intentionally excessive collection of money shots, and both turn an enormous profit based on a minimal investment.  PLUS: boobs.

**Or find yourself watching the middle of a sex scene, clearly used by the previous renter for recreational purposes.  You all know who you are.

***My Dad, while hardly a cinephile, always found something to torture me with: first with DUNE, and later with THE SONG REMAINS THE SAME.  Neither memory is particularly pleasant.