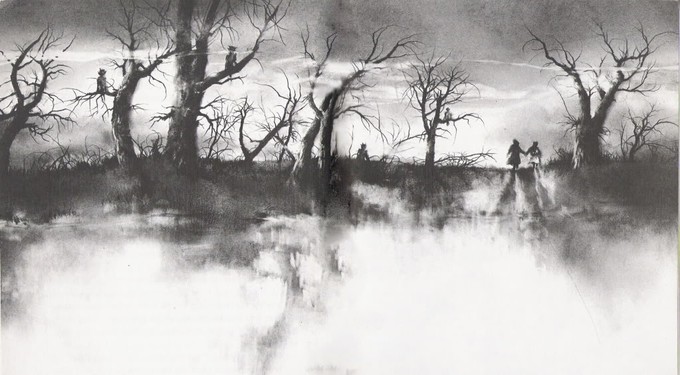 NOTE: Roxton Press — forthcoming publisher of a revised an expanded version of my 31 DAYS OF THE FOURTH series — has kindly catalogued this current AICN serial; check it out here, and then tell Prometheus which article you disagree with the most.  Put me in my place, and win a prize.

I first discovered Scary Stories to tell in the Dark not long after I’d been transplanted from one side of Maryland to the other.  I was lonely, and bookstores were comforting places.  At eleven, I’d already read Dracula, Frankenstein, and an unhealthy amount of Gothic literature; before the books, there had been the movies, as well as Kid-Friendly adaptations advertised in The Weekly Reader.  I don’t say this in a self-congratulatory way, or to suggest that I was any more a precocious young reader than other children during the era of HE-MAN and TRANSFORMERS;* rather, I was lonely, picked on, and probably deserved it.  Nonetheless, Scary Stories to Tell in the Dark came to me at a perfect time, as the series not only allowed me the escape I felt I needed, but the opportunity to become a Playground Storyteller in the way I definitely did.  My value suddenly went up amongst my peers once it was discovered that my brain housed an encyclopedic knowledge of useless information (albeit the fun kind).  Today I’m old and can’t find my glasses to save my life.

The Scary Stories anthologies were essentially repackaged urban legends (e.g., The Vanishing Hitchhiker, The Hook, The Mexican Pet, et al.); jump stories (The Golden Arm); and the occasional folk song thrown in for good measure.  Each tale was presented in a tidy little package of no more than three pages at the most, so it was perfect for reading on the bus ride to and from school (and for memorizing for recess recital the following day).

The stories were, by and large, hoary old chestnuts we’ve all heard a thousand times, or seen as episodes of TWILIGHT ZONE and ALFRED HITCHCOCK PRESENTS.  At that impressionable time, though, this was altogether new to me, to say nothing of other boys and girls of the mid-80s.  It sent me down a rabbit hole, ultimately leading me to Jan Harold Brunvand’s sociological studies on the genesis, dissemination, and transmutation of urban legends; it’s also what compelled me to begin reading EC Comics, which in turn took me directly to Stephen King’s Night Shift.  Like all the best jokes, the most effective Horror stories are short, direct, and build up to a killer punchline (pun occasionally but most definitely intended).

However, more effective than the stories themselves was the art.  Stephen Gammell's smudgy line work was like the doodling of some mad demon, hellbent on making absolutely sure that a generation of kids grew up into neurotic pill-popping alcoholic divorcees who wake screaming from recurring nightmares about headless roommates.  This was hardcore, recipe-for-a-life-in-therapy kind of stuff, evoking terror that far transcended the author's otherwise gentle retelling of some gruesome stories.  One need only check out "The Hand," about a practical joke played upon a nursing student, to see how much more effective the story was for the CREEPY FUCKING PICTURE THAT WENT WITH IT.

So when the series was re-released for its thirtieth anniversary in 2011, Harper Collins did the absolutely sensible thing and hired Brett Helquist — the Series of Unfortunate Events artist — to re-illustrate the books and make them absolutely, totally non-threatening.  Because, you know, otherwise Cody's Mom might not get to put a PROUD PARENT OF A THIRD GRADE HONOR STUDENT on her bumper once her little angel decides to rechristen himself "Xylos" and starts cutting himself to Nine Inch Nails, all because of those books.  Or something.  I don't know.  I'm bitter.

The series spanned three volumes, which was about one too many — all the best stories showed up in the first two — but even then they were fun, gross, and creepy; the perfect gateway drug for the elementary school set.  And while my teachers might have been annoyed that they had to keep taking them away from me (I had a habit of reading in class), even they were thumbing through them, because let's face it: that artwork gets your attention.  The twist endings were just the icing on the very scary cake.

The next generation was less fortunate.  Very young Millennials had to subsist on a diet of Goosebumps and ARE YOU AFRIAD OF THE DARK?  The former was the obscene-in-output series by R.L. Stine, featuring such generic recurring characters as Slappy the Ventriloquist Dummy, and…whatever else; the latter was a Nickelodeon-produced anthology show that was equally worthless insofar as actual, subversive content was concerned.  We weren’t all that far out from ghoulish late-80s/early 90s programming (TALES FROM THE CRYPT, et al.), and even the network-based content that shied away from Tits & Gore (TALES FROM THE DARKSIDE) was appropriately traumatic for an impressionable mind.  The difference with Goosebumps and ARE YOU AFRAID OF THE DARK? was the conscious decision to target an age-specific demographic — children — by featuring underage protagonists in scenarios that were juvenile even for them.  Both are remembered fondly today by adults who are absolutely, one hundred-percent incorrect and shouldn’t be allowed to have opinions on anything, ever; both have likewise made it to the big screen, or continue to threaten us with the very real possibility of arrival.  Now that’s scary.**

There have been other books and television shows made specifically to (gently) creep kids out, but these remain the most enduring.*** There is nothing currently out there fulfilling the same function, or attempting to molest children with a similar, thematic Bad Touch.  Even those classic novels of the genre that I had mentioned owning Scholastic editions of, are (as far as I know) similarly a thing of the past, to say nothing of the Pocket Classics series of min-graphic novels.  Elementary schoolers all have fucking iPhones, anyway — where’s the incentive to read actual books?

But perhaps all is not lost.  Just this past week, I told my son a somewhat scary story about a piece of cheese named Brie, whose sense of value and worth was determined by whether or not she was selected  from the Wegmans display case by he very rich (and uncultured) couple who purchased her for an appetizer platter at their holiday party; as she lay there on sterling silver, awaiting the opportunity to be appreciably consumed, she was passed over in favor of buffalo dip, and left forgotten overnight (the Hispanic maid was sent to bed and told to worry about the clean-up in the morning).  Forgotten, she began to spoil, and lose her gorgeous hue as she rotted on a sideboard, overlook for days.  My son, thoroughly entranced, went to bed with this story fresh in his mind, and when we woke up the following morning, he launched into a tale of his own about a lake that turned swimmers into zombies who in turn caught small children on the shore and messily devoured them.  Now he’s threatening to put the tale to paper, and wants to hear more.  And it just so happens that I have three specific books, left over from childhood, that I think would be perfect for turning his young mind into something not too dissimilar to that cheese I described to him.

*Except I so totally am.

**Yeah, yeah: Shut up, Erik.  I freely admit it — I took my seven year-old to see the second GOOSEBUMPS during its theatrical run.  I am happy to report that he didn’t find it in the least frightening, exposed as he’s already been to AN AMERICAN WEREWOLF IN LONDON, and — during recovery from my surgery this summer at which time which I could do nothing but marathon franchises and write opinionated SPIDER-MAN articles — A NIGHTMARE ON ELM STREET.  He was particularly taken by FREDDY’S REVENGE due to subtext he can’t possibly understand but finds fascinating, thus proving he is indeed my son, and not the milk man’s.

***I can say with full honesty that I’ve not yet seen the cinematic SCARY STORIES TO TELL IN THE DARK, because while I always love the opportunity to complain about something I love being ruined, the modern takes on old-school anthology properties tends to lean toward a murky, all-inclusive narrative format.  Stories are mushed together to form a cohesive whole rather than a Portmanteau.  Both GOOSEBUMPS films added insult to injury to the mix, as Jack Black appears as R. L. Stine himself — a character whose magical power of storytelling is the only way to bind the creatures that have escaped his pen.  Somewhere atop the Dark Tower, Stephen King is rolling his eyes. 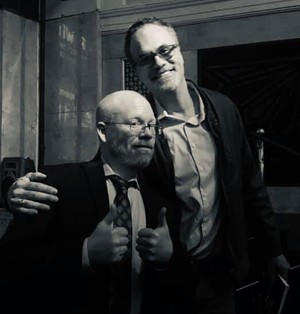 SECOND NOTE: Congratulations to my friend Eduardo Sanchez and the cast and crew of THE BLAIR WITCH PROJECT, which played to a sold-out crowd last night in Frederick in honor of its twentieth anniversary.  Thanks also to Jordan Miller of the CAMP NIGHTMARE podcast, who included me in his pre-screening retrospective video.  If you missed my write-up on Found Footage, click right here, and have a look at my film, BUTTERFLY KISSES, which deconstructs the genre in much the same way as these AICN serials attempt to do.