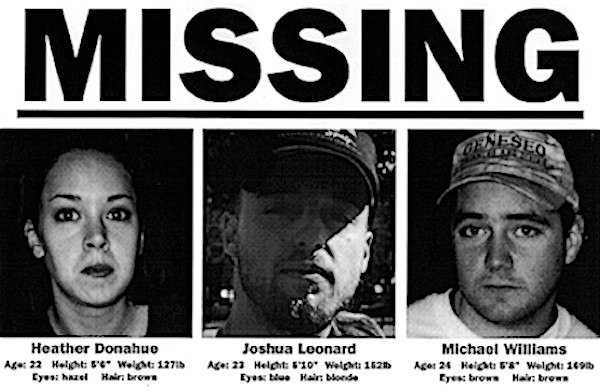 In 1999, websites like this one began circulating rumors about an upcoming release called THE BLAIR WITCH PROJECT.  The thing that made these rumors different from the typical spy report is that, supposedly, the film in question was real.  It wasn’t just THE SCARIEST MOVIE OF THE 90s — it was actual Real Life documentary footage that had been discovered long after the fact, detailing the death or disappearance of the filmmakers in an alleged supernatural incident.  Setting aside the narrative content, this verisimilitude resulted in a cinematic experience designed to outright terrify.*

Telling the story of three film students who've endeavored to make a documentary about a local paranormal legend, THE BLAIR WITCH PROJECT isn’t the first Found Footage movie, but it’s certainly the one that popularized the format.  At the time of release, there was a certain Wild West quality to the internet, and its uses beyond CompuServe were only just being realized.  For the purposes of film as a financial endeavor — specifically the way in which they were branded, and as an avenue for producers and directors to connect with their audiences and receive instant feedback — BLAIR WITCH was the launch pad for internet-based viral marketing.  It signaled the beginning of fan-based networks, and the ability of a fledgling upstart like Harry Knowles to topple a corporate franchise with a simple review (see: BATMAN & ROBIN).  It was an electrifying time.

What Eduardo Sanchez and Daniel Myrick accomplished cannot be overstated.  THE BLAIR WITCH PROJECT was an experiment in form, and a clever way to overcome a meager budget and DIY resources.  By embracing such limitations and putting them front and center rather than attempting to disguise them ("It's a student film!  It's supposed to look like this!"), the filmmakers invited a suspension of disbelief that had long since faded from Horror.  At the time, the post-SCREAM revolution had resulted in slick, Hollywood Slashers starring actors from network dramedies.  Genuine fear had been purged from the genre, and it was hard to see these mainstream releases as anything more than product designed for tennybopper consumption.

Then there came the rumblings of that mysterious new film, and everything changed.  THE BLAIR WITCH PROJECT was rumored to be true —people insisted it was true — and the hype resulted in a must-see film during a summer in which THE PHANTOM MENACE and THE SPY WHO SHAGGED ME reigned supreme.  The upstart captured the attention of the masses and became a phenomenon.  Even once the "facts" began to spill out and the illusion was shattered, audiences ignored them.  They wanted to believe.  It was fun to believe.

But again, THE BLAIR WITCH PROJECT wasn’t the first Found Footage movie; that honor (arguably) belongs to CANNIBAL HOLOCAUST.  Plot-wise, it's especially relevant during the Age of Trump, particularly in a world filled with self-congratulatory Social Justice Warriors whom I wish cI ould knock the Facebook Soapbox out from under;** but the source material causes a rather specific problem for viewers both Now and Then, in that CANNIBAL HOLOCAUST contains the actual on-screen mutilation of live animals.  It can be argued that the film is less remembered for its introduction of faux-documentary conventions to the Horror genre than the stomach-turning imagery — something we're not likely to see in a commercial film release ever, ever, ever again.***

Cruelly slaughtering animals for the purpose of selling movie tickets is always a controversial decision; and yet some could argue that CANNIBAL HOLOCAUST director Ruggero Deodato gave the fictional elements of his story a greater sense of verisimilitude by introducing shocking real-life Critter Execution to a film which seemed to promise that any and every horrible thing was possible.  All bets are off at that point.  Though in some ways more a Docudrama than THE BLAIR WITCH PROJECT, Deodato presents what is possibly the first example of what would ultimately become an entire aisle at Best Buy.

A fictional anthropologist travels to South America to locate a missing documentary crew comprised of four Fuck-The-Man anti-establishment Longhairs; and upon discovering their camera and 16mm footage, he returns to New York to assemble his findings for a proposed television special.  Curiosity quickly turns to disgust as he watches the the content of those film canisters, turning the second half of CANNIBAL HOLOCAUST into an extended flashback in which these idealistic kids journey far from civilization to get a front-row look at a primitive, Stone Age society that somehow still inhabits a progressive world ripe with automobiles, game shows, Chuck-E-Cheese, and the Superbowl.  The voyage quickly becomes a Heart of Darkness affair as the "civilized" kids, once removed from the safety of a hive mind culture of law and order, begin to regress and become the very thing they're looking to exploit: savages with a taste for human blood.  Though it's handled as a metaphor — right up until the time when the "primitives" actually rend flesh — the point is clearly made.

But the poor fuzzy (and scaly!) animals...!  Why did Deodoto have to kill them?  Animal rights activists would swell in a collective Forehead Vein of Injustice if CANNIBAL HOLOCAUST were released today.  The director now says that, if wishes were horses that beggars could ride (instead of murdering on camera), he wouldn't have slit the lemur's throat in close-up, or ripped the rainbow turtle apart, or shot the Ewok in the head after the village was burned down; but one has to stretch very little to realize that 1) the horrible (and realistic) effects sequences that follow are rendered more believable because there's no question that the filmmaker is willing to cross the line between narrative fiction and narrative reality; and 2) we realize that we're savages, too — only we're not traveling into the jungle to regress.  We can do it from the comfort of our La-Z-Boy.  All you need is a copy of CANNIBAL HOLOCAUST.  After all, no one is twisting your arm and making you watch it, are they...?

What was once form has now become subgenre.  Deodato introduced the concept of Found Footage in headline-screaming fashion; Sanchez and Myrick took the ball, ran with it, and inspired an entire category of film that has transcended Horror.  Beyond BLAIR WITCH clones like THE LAST EXORCISM and the insanely successful PARANORMAL ACTIVITY franchise, we now have Superhero Found Footage (CHRONICLE), Sci-Fi Found Footage (CLOVERFIELD), and mockumentaries that have veered from the Christopher Guest format and embraced the tropes of its more commercial offspring — CATFISH indisputably falls into this latter category, despite the claims of the filmmakers to the contrary. Via experimentation, Horror received a creative shot in the arm.

Have we seen the end of groundbreaking concepts?  Is there any territory left to explore?  It was exciting the first time we heard Run-D.M.C. and Aerosmith fuse Rap and Rock, and Grunge was a unique fusion of Punk, Metal, and heroin; after that, what's left?  Once a thing works, the imitations follow, and genres are fused together to generate new and exciting concepts; but after a while we run out of things to stick in the blender.  The difference with THE BLAIR WITCH PROJECT was that it was a creative response to its lack of Hollywood-style production values, and necessity proved the mother of invention.  It was the last great original idea we've seen since its release, and not only reminds us that sometimes less is more, but that we love to be scared by a good story, even when we know it's just that.

*To celebrate the twentieth anniversary, I am posting this article a mere handful of hours prior to a special Maryland screening of THE BLAIR WITCH PROJECT, hosted by Eduardo Sanchez and featuring members of his cast and crew.  All my best to them this evening — they’ve earned the recognition they continue to receive two decades onward.

**There’s nothing wrong with being progressive and forward-thinking; enlightenment’s great.  If you’re doing so because it makes you feel better about being you, then that’s when you need to stop and re-evaluate.

***Eli Roth decided he was up to the task.  In 2015, he released his re-imagining, THE GREEN INFERNO.  Even including Roth’s penchant for ultra-violent imagery, the decision to go back to this specific well prompted the question of how anyone could ever possibly remake the film and retain its disgusting integrity.  Removing the fact that, almost two decades before THE BLAIR WITCH PROJECT, people thought that CANNIBAL HOLOCAUST was real — Ruggero Deodoto even has the prison record to prove it! — how can any filmmaker attempt to revisit a film best known for blurring a very hard line?  And if you can't at least meet, let alone top, the effect of the original, what's the point?  No one is going to believe for one moment that Eli Roth — director of admittedly hardcore faire — is showing us "real" Found Footage, or even manufacturing the illusion through on-screen animal execution.  No matter how convincing the FX or offensive the effort, it will always be a watered-down, toothless and unintentionally humane version of a story about inhumanity.