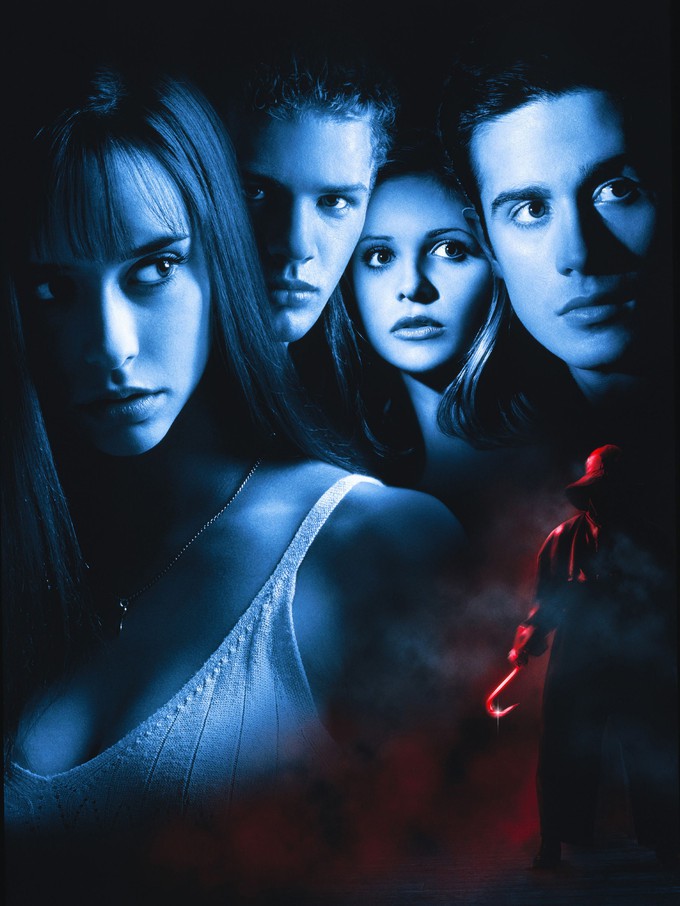 NOTE: Want to trash this article, or another like it?  Maybe one of my Fansplain-y STAR WARS pieces?  Or that time I defended SPIDER-MAN 3?  Or maybe that time I said THE DARK KNIGHT pulled the same shit SPIDER-MAN 3 did, and why that makes you wrong for defending what Nolan did to Two-Face while also complaining that Venom was wasted?  Want to be rewarded for attacking my good name on social media?  Here's you chance to win a prize for doing it.  Oh, and fuck you, too.

Horror films have always served as a training ground for young, exploitable talent.  Every once in a while you’d wind up with a Johnny Depp or a Kevin Bacon, who emerge from the carnage to go on to bigger and better (?) things; but more often than not, the stars find themselves locked into a successfully modest career touring the convention circuit, charging a borderline hilarious sum of money to have your picture taken together.**  Hey, more power to them.  In some cases, their acting careers might not have longevity, but their celebrity endures (on a niche level).  This is all the more notable given that, in many cases, their characters didn't even have names we’re tasked to remember.  Look, it's Obnoxious Fat Kid Who Gets an Arrow Through The Throat.  Racist Asian Stereotype.  Vampire With Long Blonde Hair.  The Guy Who Plays Leatherface in The One Renee Zellweger Pretends She Didn't Make.  Within the realm of genre fandom, these are bona fide Superstars.

This Horror shit ain’t exactly Shakespeare in most cases, but it doesn't need to be, and that’s what makes it so wonderful.  The (usually) thinly-sketched characters are audience stand-ins who die (or kill) in ways that tap into our collective fears, and prey on shared phobias.  The fact that the cast is simultaneously as unknown and yet familiar as a group of kids screaming drunkenly in the Taco Bell drive-thru at 3am, is what allows us to both despise and identify with them.  Thus, that hoary staple of the genre: suspension of disbelief.  It’s to the benefit of the experience that you’ve never seen many of the leads, as it’s what allows us to buy into the on-screen scenario, and likewise causes us to celebrate the actors we’ll likely never see again outside of a Ramada Inn ballroom.  ONLY FIFTY DOLLARS FOR AN AUTOGRAPH!  STEP RIGHT UP!

And isn't this why Horror films with actors we do recognize fail to give us that same jolt?  It doesn't matter where he or she is on the food chain – DAWSON’S CREEK or SCHINDLER'S LIST – because when we know the actor is an Actor, then we also remember the movie is just a Movie.  It’s harder to buy into that Money Shot when it all seems fake, isn’t it?  Of course it is!  With rare exceptions like CANNIBAL HOLOCAUST and THE BLAIR WITCH PROJECT, no one goes in thinking they’re watching a Snuff film, but the absence of recognizable faces turns the film into an experience rather than a commercial product; ironic, given that many productions we’d list as having more integrity were, in fact, exploitation-based.  We’re all perfectly aware that these films, like those of any other genre, are transaction-based, and feature on-camera performances; but Horror, just like porn, is all about the cheap immediacy: it’s what lends the moment credence and authenticity.  It’s what makes it hot, because it looks real.

In the post-SCREAM 90s, Slasher flicks got a slick, commercial facelift.  Instead of watching No Names run for their lives, we were forced to watch Jennifer Love Hewett, Sarah Michelle Gellar, and countless other pretentious people who use all three of their names.  We got "serious" Horror like THE RING (Naiomi Watts AND Brian Cox...?), THE SIXTH SENSE (Wait, Bruce Willis…?), and a whole bunch of other po-faced, gloomy un-Funs starring Jennifer Connelly and Gabriel Byrne and Anthony Hopkins and Nicole Kidman and Jessica Chastain, etc. etc., et al, ad infinitum.

So what’s the issue with mainstream elevation of the genre?  Why is it a problem when Horror loses its low-budget grunginess, and stars the girl from 7TH HEAVEN?  Let’s rephrase the question in order to answer it properly.  How scared can you get during a film starring Jessica Biel when:

And what are unknown, first-time actors in Horror if not stand-ins for you, the viewer?  If they serve any purpose beyond allowing us to imagine ourselves in terrifying situations where no one is safe (simply by virtue of the fact that no one has a contractual clause demanding a certain number of on-screen minutes, or sequel rights), then the anonymity likewise allows us to imagine that the events actually happened to someone, somewhere.  Again, I have to keep going back to porn, because both genres are about dark fantasy, and a desire to see things we aren’t supposed to.  The likelihood that any of the girls from PARTY OF FIVE are going to take off their shirts is unlikely in the extreme, and that’s okay – except for the nagging reminder that this particular point was established via a NO NUDITY waiver, designed to protect a reputation with a certain demographic.  Give me some girl who doesn’t care, and chooses to take off her top (or not) because it’s a part of the story being told.

I can buy into that first TEXAS CHAINSAW MASSACRE Tobe Hooper made, whether by placing myself there, amongst the victims; or through viewing it all as some sort of nasty snuff film that was later unearthed by way of a criminal investigation; or even just by watching the film, and buying into the notion that this actually happened somewhere, at some time.  Again: suspension of belief.  Then I see the very polished remake, featuring a lead whose involvement in productions like this one (to say nothing of her participation in Gear cover shoots) caused her to become publicly shamed by the producers of her very wholesome television show – you know: the one starring the actor who would later become embroiled in the slightly less-scandalous child sex-abuse allegations? – and that’s when I have trouble investing in what I’m watching.  It (usually) has nothing to do with the actor; it’s that I don’t want the actor in my Horror film, because their inclusion means it’s now it’s just a “movie.”

There are those will rightly point out that the early Slashers featured a string of washed up Has-Beens in supporting role (SEE: Donald Pleasance, Betsy Palmer, John Saxon); they will also correctly note that "prestige Horror" has given us appearances by legendary character actors (Max von Sydow) or aging, leading men (Gregory Peck).  There's definitely an argument to be made for appropriate usage.  However, one could also argue that Horror is made primarily for younger audiences, and how many of them were watching Ingmar Bergman films, anyway…?

As Sean Cunningham later recounted, he and the producers of FRIDAY THE 13TH were looking for kids to headline these films who looked like they'd walked right out of a Pepsi commercial – because ordinary people identify with ordinary people.***

**Paying a celebrity to pose for a picture with you and then posting it on social media is like buying a prostitute for the night and then bragging to your friends that you had sex.  Sorry, folks.  The most blatant personal example of how insincere those on-camera hugs really are occurred at a 2018 film festival/convention where I was screening BUTTERFLY KISSES.  Having half an hour to kill, I walked the floor, eyeballing the celebrity talent.  Every star was provided a Handler, who sat beside their VIP at their respective booths; the Handlers had plastered-on smiles while the VIP in question scrolled through their mobile Twitter feed.  Occasionally he or she would look up, see a potential mark, and sit there with a neutral expression – until the mark approached the table, at which time the actor would leap to his or her feet, playing the gracious, humbled Movie Star for an adoring fan.  They’re called “actors” for a reason, you know.  The sole exception to this schizophrenic, transparent behavior was Zach Galligan, who kept glancing up from his phone to shoot dirty looks at convention attendees as they passed by.  That guy wasn’t acting – at least not until he had reason to likewise jump up and go into his very, very rehearsed Oh, you want to talk to Little Old Me? routine.