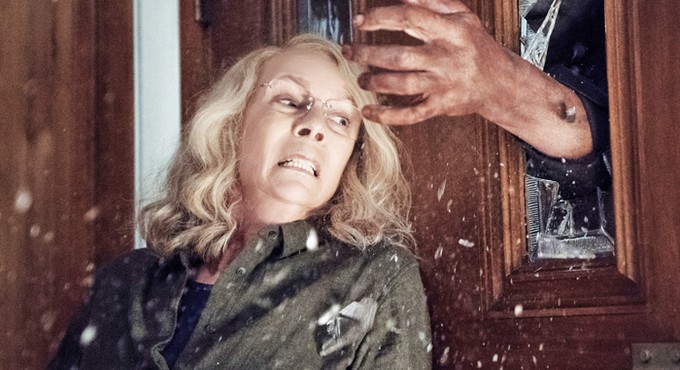 I’m not sure how much (if any) credibility I have with my readers: I’m opinionated, often dismissive, and hyper-critical.  My snarky dismissal of religion has hit a particularly sore spot.  I’ve grown accustomed to negative feedback that includes, among other things: That was a shitty review because all you did was focus on a single idea (PRO TIP: I rarely write reviews, as anyone reading my work should be fully capable of divining for themselves); sometimes I’m told I just like “bashing” things (STAR WARS) or I’m being a “hipster” (SEE: my opinion of THE DARK KNIGHT).  Sometimes I’m told I’m tarnishing the legacy of AICN with my endless flow of overwritten sewage masquerading as film criticism.  It’s okay, boys and girls – I can take it.

Here’s where I threaten to discredit myself, now and forever, and I’m going to do it as succinctly as possible.  I hate HALLOWEEN.  Not the season (it’s my favorite holiday of the year), but I genuinely hate that fucking film, mostly because I hate that whole fucking franchise.  It sucks, and I can’t stand it, and I can’t understand anyone who loves franchise Horror and considers this an even remotely watchable series.

Before you race to the Talkbacks to tell me exactly how much shit I’m full of, allow me at least two further paragraphs to explain.  You can skip the rest of the article if you’d like.  I promise not to bash Christianity if you stick with me to the end, though.

So here’s HALLOWEEN, a simple story about an escaped lunatic who’s killing babysitters in Haddonfield, Illinois.  The Final Girl — Laurie Strode — survives the encounter; roll credits.  The sequel comes along, and all of the sudden Laurie and Michael Myers and siblings.  Okay.  Part 3 drops the previous story threads to become a standalone anthology piece, and after the inevitable Nerd Stench  that followed this decision, we got the inevitably-subtitled RETURN OF MICHAEL MYERS.  When Jamie Lee Curtis chose not to return for this fourth installment, the decision was made to kill the Laurie Strode character in an off-screen car accident and reintroduce the series with her daughter, Jamie (Danielle Harris).  The events that followed continued through the two subsequent chapters formed a sequel trilogy to the first two HALLOWEEN films, as such.

But…!  When the two-decade anniversary of the series rolled around in 1998, Jamie Lee Curtis returned as the previously-dead Laurie Strode for HALLOWEEN: 20 YEARS LATER.  The orphaned daughter was never mentioned except for in a deleted scene that doesn’t count, anyway.  Seizing this opportunity, Parts 4 through 6 were ignored, and H20 (as well as its sequel, HALLOWEEN: RESURRECTION) were presented as direct sequels to 1981's HALLOWEEN II.  Confusing?  Yes!  But!  In 2018, there was another reboot/sequel, again starring Jamie Lee Curtis, but one that ignores the events of H20 (and even the first sequel!).  Its title?  HALLOWEEN…a sequel to another film called HALLOWEEN.*  Thus, we have two timelines, and a Michael Myers who is either Evil Incarnate, or part of some pagan cult.  Take your pick…but don’t forget the Rob Zombie remakes the rest of us are all still trying to!

The "retcon" has been around from the earliest days of franchise Horror (see: BRIDE OF FRANKENSTEIN, which cheated its way around the climax of the first film), and it’s an effort that typically serves to reopen a closed door and allow stories or characters to continue, or restart altogether.  The rule of even the most thinly-sketch story arc demands a resolution to events, and thus is Evil vanquished.  Curiously, producers never consider simply leaving the chaotic circumstances as the status quo; there’s always heroic triumph, followed by a tease that the monster is still alive, or planning its return.  When the writers find themselves in an impossible bind, they resort to ignoring previous entries, or skipping whole sets of movies altogether, in order to return to more story-ready material.  It’s rarely satisfying in execution.  Sometimes, however, previous retcons are ignored and then themselves retconned (re-retconned?), creating conflicting chronology that cannot be harmonized, and in the process presents us with "Earth 1" and "Earth 2" scenarios.**

Most Horror franchises are pretty loose with their continuity, particularly the farther down the road you get with them.  It’s a genre well-known for its indifference to storytelling rules.  Jason Voorhees went from a drowned kid who didn’t actually drown, who later became a zombie, and then turned out to have a body-hopping devil worm that gave him his powers; that was all before he became a cyborg.  Freddy Krueger was an undead serial killer who could only get to you if you were asleep; before long, he was influencing objects and events in reality, or possessing latent homosexuals and unborn kids from JURASSIC PARK, and all because he’d made a deal with CGI sperm demons.  He even managed to become a Movie Star inside of a series in which he was a Movie Star.  The less said about Leatherface and his endless parade of family members, the better (to say nothing of his later mid-series decision to suddenly become my city’s pride and joy, Divine).

But HALLOWEEN is in a class of its own.  It’s so careless in its construction, and its creators literally don’t give a fuck about giving you a coherent collection of stories.  Even the dumbest retcon is a retcon because it’s sticking to a set of rules — it’s retroactively changing something that came before, or at least our perception of it.  For the non-completists, there’s usually “that weird chapter” you can skip right over***, but by and large, you’re watching a chronological series of events.  HALLOWEEN, as a series, disregards even the most fundamental basics of coherent storytelling.  The producers think this shit’s for idiots who don’t care, while simultaneously flipping the bird at those of us who want something slightly less confusing to follow than quantum physics.  The surest way to pull a viewer out of the film?  Force them to think.  Force them to think until their fucking brain bleeds.  In that sense, HALLOWEEN can never be lumped alongside its Slasher brethren as “stupid,” given the sheer number of mental gymnastics required to figure out when this shit is supposed to be taking place, and what did or didn’t happen prior to this latest temporally-isolated episode.  Or you can just like me and flip the bird right back and stop watching them, because without rules, it’s creative anarchy of the sort best seen while observing two seven year-olds play Make Believe.

There have been other examples of this sort of "baby with the bathwater" storytelling mentality (EVIL DEAD II as a comedy remake of its predecessor; Jason Voorhees becoming killable only by way of a magic dagger, but returning from the dead anyway; four EXORCIST sequels that seem to take place in four separate universes, etc.), but regardless of franchise, the question becomes: what is considered "canon"?  Do the producers have the right to un-do previous storylines that audiences have enjoyed?  Does the viewer pick their preferred version?  Are we expected to rationalize incompatible narrative for the sake of buying the entire box set when it's re-re-re-released?  Or are we, the fans, supposed to adopt the same attitude as the filmmakers and just say, Eh, whatever, fuck it: this one's set in space?****

Believe it or not, some of the dumber franchises are actually smarter than the ones with loftier Street Cred.

*At least they could have called it NEXT HALLOWEEN, or something like that.  Way to fucking confuse your Netflix audience, assholes.

**My favorite example — and the one I’m closest to — is the saga behind the dueling EXORCIST prequels, DOMINION and THE BEGINNING.  After auteur Paul Schrader (best known for sticky arthouse sex thrillers) produced a film Morgan Creek was sure would bomb, they did the obvious thing and hired Renny Harlin, who is about as far from Schrader’s aesthetic as either was from Friedkin.  In the end, there were two entirely different takes on what’s essentially the same script, featuring the same lead actor, the same sets, and all shot by the same cinematographer.  They couldn’t be more different, and while neither is truly successful, they are, taken together, a one-of-a-kind example of the ultimate Film School experiment of how two very different filmmakers approach the same material with the same resources at their disposal.  Schrader gave me the first tell-all interview back in 2005, which would subsequently end up reprinted by Centipede Press after Fangoria and Variety gave me my first fifteen seconds of fame; the whole thing can be read here.

***You people drive me absolutely insane, by the way.  Watch those fucking Marvel movies in order, or don’t watch them at all.

****FUN FACT: In the early 90s, Moustapha Akkad said in an interview that he was seriously considering setting HALLOWEEN 6 on a space station.  No kidding.  Long before LEPRECHAUN, HELLRAISER, or FRIDAY THE 13TH, HALLOWEEN planned to go Where No Man Has Gone Before, and first.