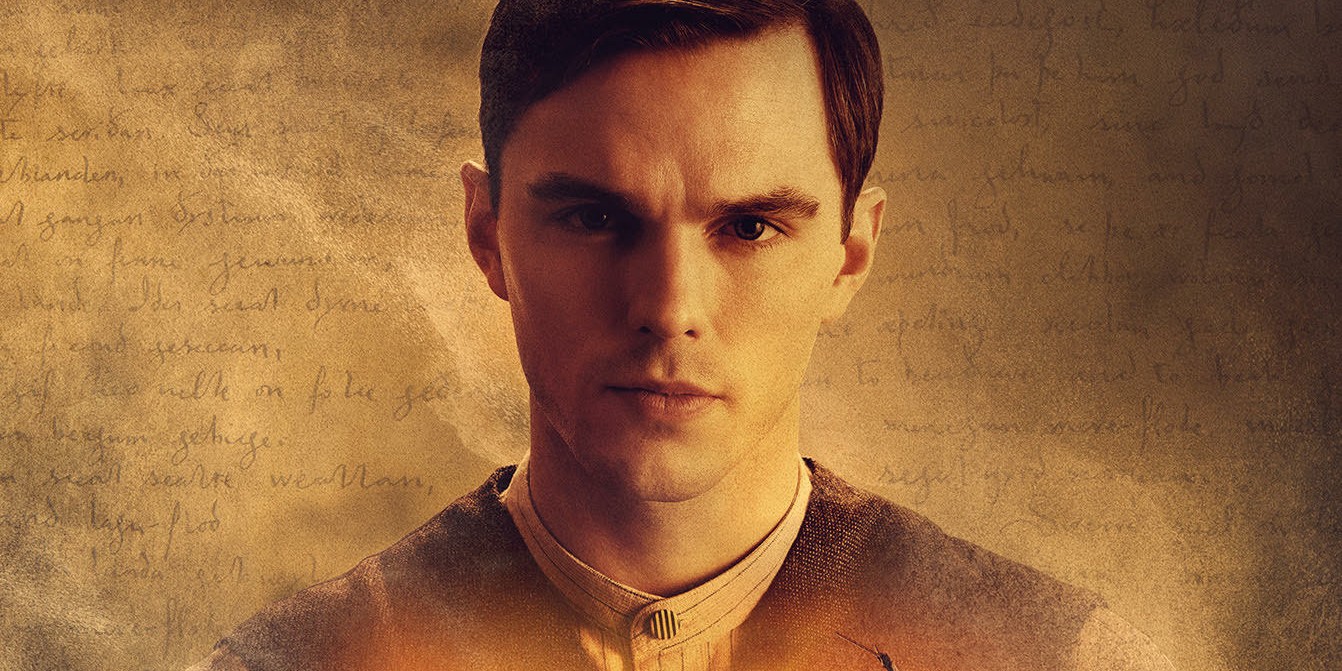 Earlier this spring, I attended the Tolkien: Maker of Middle-Earth exhibit at the Morgan Library & Museum in New York.  As a lifelong collector of rare and unusual LORD OF THE RINGS memorabilia (i.e., a giant dork), and being also a student of the Professor’s craft, this experience was the equivalent of seeing the original, handwritten New Testament Gospels right there in front of me.*  Yet while I had seen countless reproductions of the many items on display, what I found most shocking were his original paintings.  Whereas most artists – regardless of their specific medium – sketch or paint on oversized canvas, Tolkien did not; he began with the dimensions on which his work would be printed and worked within them, laboring obsessively over microscopic, meticulously-rendered detail.  If that isn’t the perfect metaphor for his fictional universe, I don’t know what is.

While not as excruciating in its brush strokes, Dome Karukowski’s TOLKIEN takes great pains to show us the creative development of Middle-Earth through the author’s life experiences.  One might almost feel they know the story if they know the stories that sprang from him.  We trace his childhood exodus from a bucolic, pastoral landscape into an industrial nightmare of smokestacks and urban claustrophobia, arriving at last in a world of stately castle-like universities housing immortal, academic knowledge.  By the time Tolkien (Nicholas Hoult) has become a student at Oxford, he’s found himself in a relationship with fellow orphan Edith Bratt (Lily Collins), an affair which is both tested and forbidden due to their incompatible status: he’s a Catholic, and she is not.  Forming a fellowship with three like-minded schoolboys -- artists, musicians, and poets alike -- Tolkien finds himself on a personal quest to claim the woman he loves while simultaneously developing the fictional universe exploding from numerous invented languages inside his leatherbound journal.

While themes of love and friendship inform our knowledge of Tolkien the scholar, they also define Tolkien the soldier.  The film is framed by the nightmarish trenches of the Somme, where he feverishly scribbled his tales amongst the littered bodies of fallen comrades.  While Tolkien always vehemently rejected any notion of allegory in his work, it’s impossible to believe his wartime experience didn’t influence the themes inherent in THE LORD OF THE RINGS; Karukowski seizes upon the hellish darkness that stains the wraparound portions of the narrative, and not only contrasts them with the story of John Ronald’s life prior, but finds harmony in its theme of loyalty to one’s fellow man.  Frodo and Sam have become the unfortunate subject of a homoerotic interpretation of male friendship (due largely to the desire to show, both on the page and later onscreen, male friendship that isn’t limited to one-armed Bro Hugs); the depiction presented here, and reinforced by the horrific consequences of the Great War, is equally brave.

The parallels between Tolkien’s life and his invention are obvious on paper, and now underlined cinematically.  There is recurring imagery designed to trigger our memories of a certain film trilogy directed by Peter Jackson, from the clothing our four, laddish heroes wear whilst prancing about tea shops filled with towering, frowning adults, to landscapes and environments you’d swear were filmed in New Zealand, or the bigature stage at Weta Workshop.  Even musical cues – particularly the use of choral voices, and at least one Enya soundalike – are designed to evoke such connection.  It’s curiously meta in that respect.  TOLKIEN’s story borrows liberally from New Line’s adaptation of his work, which was itself an adaptation of Tolkien’s writings, which were in turn deeply influenced by the love and tragedy experienced throughout the author’s lifetime.  Like a ring, it comes full circle.

While the acting – particularly from Lily Collins and the younger incarnations of our four roguishly bookish friends – can seem at times stagey, it’s a minor annoyance only.  Lasse Frank Johannessen’s cinematography is stunning, as is the production design overall.  For a presumably modest Fox Searchlight endeavor, it feel opulent, while managing to avoid the stuffiness of similar period costume dramas.

For those who were hoping to see more of Tolkien’s later life – in particular, his contentious relationship with C.S. Lewis, whose NARNIA books Tolkien despised due to the writer’s audacity to include Greek Gods and Santa Claus in the same universe – you’ll find an incomplete tale.  TOLKIEN functions more as an origin story for the world of Middle-Earth, and thus ends appropriately in the expected moment.  However, like all prequels, fictional or otherwise, it serves best as an epilogue, and a worthy one at that.

Being a notorious hater of cinema, particularly adaptations of his own work, Tolkien would have despised Peter Jackson’s trilogy.  The filmic TOLKIEN would likely fare little better in his estimation, though you’d hope he’d at least appreciate that calculated attention to detail in both.

*And just as fictional.