Greetings and salutations!  Having been laid up post-surgery and preparing my next amazing, spectacular, and altogether superior AICN series, I’ve had the singularly awesome opportunity to indulge myself by popping pain meds and watching Horror flicks.  Do the two go well together, like coffee and cigarettes, or tits and gore?  You bet they do!  Here’s a sampling of my couch potato entertainment, and they’re all new, all available, and all worth seeking out. 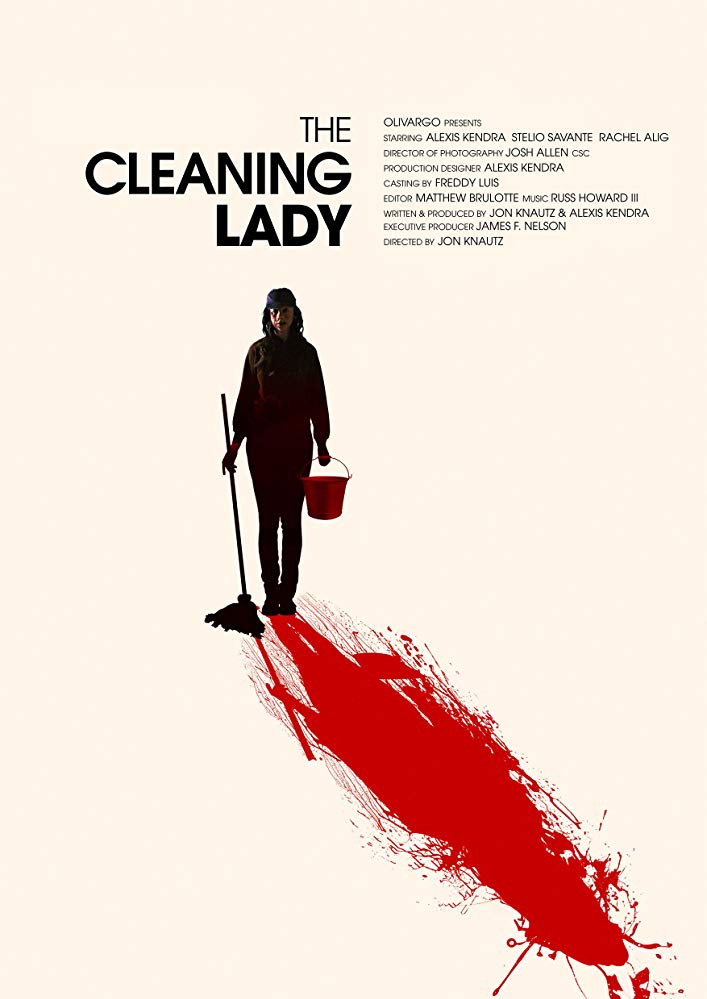 Nothing quite sets the stage like a pre-credits sequence involving a handful of mice pureed in a blender.  There’s something almost sweet about telegraphing your mission statement in such a wonderfully heartless and disgusting fashion; it’s like a warm blanket of excess.  Don’t worry, guys: we’re not fucking around.  You’re about to watch something cruel and violent.  Bring on the beer, pizza, and barf bags.

THE CLEANING LADY isn’t kidding.  We go from Mouse Juice to what must be a first in Horror: a support group for love addicts.  No, not sex addicts; the film makes this very clear.  These are people who are addicted to unhealthy relationships.  Speaking as someone who 1) knows this film genre inside and out, and 2) knows this personal weakness inside and out, I was taken aback by setting the stage this way.  The scariest stuff is the stuff you can relate to.

After the delightfully surreal double-punch of the previous scenes, we go into what appears to be a SINGLE WHITE FEMALE sort of scenario, involving the married man-loving Alice (co-writer Alexis Kendra), and her deformed, burn-scarred, and socially awkward new housekeeper, Shelly (Rachel Alig).  Shelly’s growing obsession with her new employer starts off in the usual way: she steals jewelry and wistfully says stuff like You look like a Barbie doll; then the story takes a dark left turn and runs screaming headlong into a nightmarish country of pre-teen sex abuse and penis-harming.  That Mouse Juice wasn’t just for shock value — Shelly’s even more disturbed than we’d anticipated, and her backstory is darker than Satan’s puckered asshole.  Parents, take note.

If there’s one image I can’t shake, it’s an early bit where Kendra’s character, calling a plumber, takes a bite out of a piece of generously-buttered toast.  Her immaculate hairstyle features an immaculate swath of immaculate blonde hair falling immaculately down to her chin, which immaculately makes near-contact with the oddly-handled snack.  It’s the kind of ‘do you can’t just wash and reset quickly or easily, and walking around with buttery hair against your cheek, or getting Land O’Lakes all over your fingers every time you tuck it behind your ear, is easily the greatest Body Horror situation an OCD guy like myself can imagine.

THE CLEANING LADY is nasty, violent, and compulsively watchable.  Enjoy it with your spouse, particularly if you’re cheating on him/her. 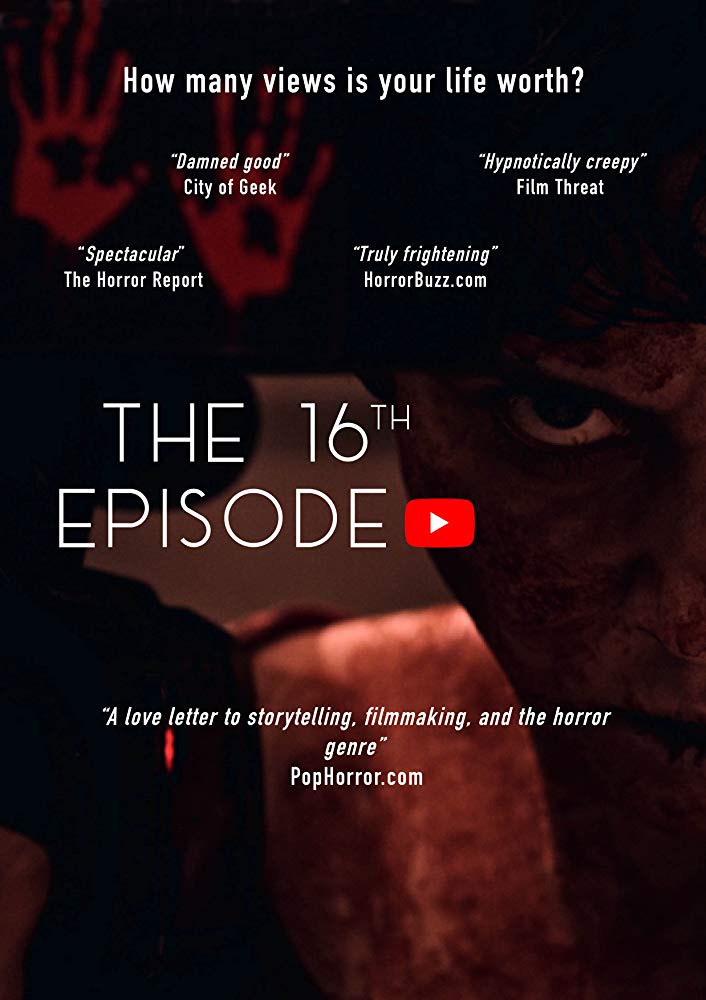 There is a suspension of disbelief necessary when watching any film, and Found Footage can either heighten or diminish the demands required of the viewer.  Trust me, I know.  With that said, when watching a faux-documentary work of narrative fiction, certain tropes become immediately less believable.  So when THE 16TH EPISODE opens with a YouTube filmmaker (Rebecca Ramon) engaging in conversation with a villainous thug, and the two are communicating in two completely different languages but clearly understanding one another, it reminds us that, yes, we’re watching something that’s supposed to look “real,” and definitely isn’t.

THE 16TH EPISODE is the cobbled-together footage involving a group of filmmakers struggling to monetize their work, which involves traveling to cool, faraway places, and having adventures along the way.  We know their trip to Casablanca won’t go well when, in the span of three minutes or so, there are self-conscious, on-camera remarks about jump scares and how the present situation feels like the beginning of a Horror Movie.  The only surprising thing the 16TH EPISODE could have done would have been to suddenly become a romantic comedy or something equally unexpected.  Instead, they go on to actually define the genre of Found Footage for us.  Head, meet hammer.

Because THE 16TH EPISODE is exactly the kind of film Director Jerome Cohen-Olivar has his cast telling us it is, the onscreen filmmakers wind up attending a party to which they take their camera gear, and — surprise! — it’s actually a Satanic ritual, because of course it is.  They also keep the camera rolling at all times, because of course they do; and we keep seeing the action shot from angles that couldn’t possibly have been filmed, because of course we do; and one of the crew members happens to be an expert on ancient languages involving the summoning of demons, because you get the idea.

If this sounds harsh, it isn’t so much a criticism of THE 16TH EPISODE as Found Footage in general.  I’m probably the worst guy to review a film of this subgenre, having made a film that deconstructs it; but the fact that there are a ways around the structural weaknesses inherent in the form, and the filmmaking cheats that are typically employed, that makes the failure to try all the more grating.  If anything, Cohen-Olivar leans into them.  This is especially frustrating given that THE 16TH EPISODE is otherwise a well-made demonic possession movie, albeit one that gets a bit campy as the 93 minutes pile up.  Just knock it off with the ongoing HEY, ISN’T THIS JUST LIKE A HORROR MOVIE? dialogue, guys.  We got it the first three times. 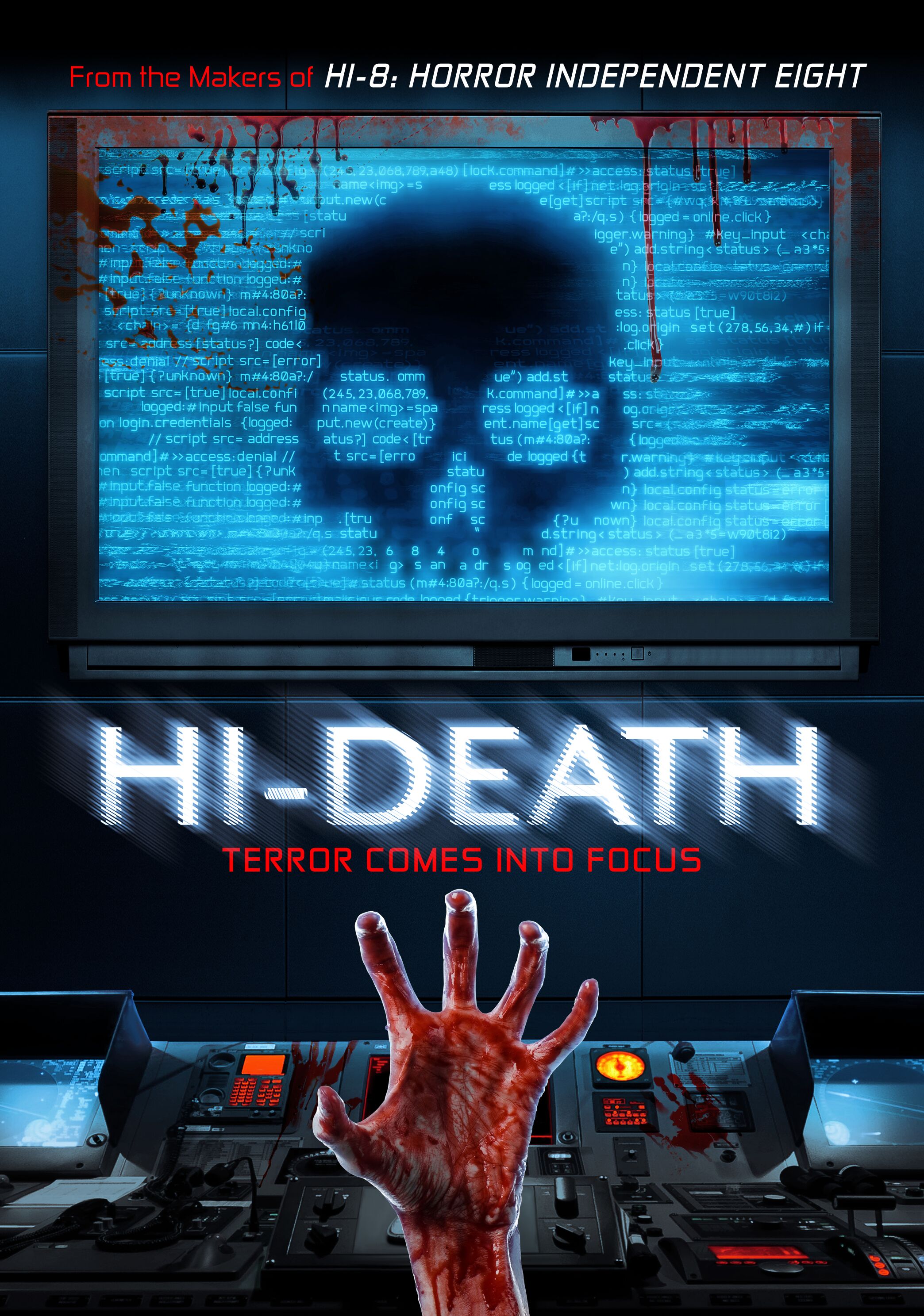 The Horror anthology!  We all have our favorite,* and it’s clear from the opening logo (consciously evoking 80s-era HBO), as well as the synth-heavy score, and the shot of George Romero’s star on the Hollywood Walk of Fame, that the makers of HI-DEATH are definitely fans of CREEPSHOW.    It’s also clear from the prologue audio that HI-DEATH is a low budget movie, and one that isn’t afraid to crib the cover art from V/H/S.  Tone set!

Here we’re presented with five films from five filmmakers, to varying results.  “Death Has A Conscience” is the story of a junkie who receives a bedside visitation from a hooded, rubber-skulled Reaper and a group of people wearing upside-down masks.  “Dealers of Death” teases us with the notion of sex-based snuff films, only the sexual activity involves sex no one would ever want to watch, and the story is told with all the velocity of a speeding glacier.  By the time “Night Drop” finally begins, one is so happy to see competent filmmaking that even the low-res image becomes forgivable.  The story — involving an after hours return to a video store — contains the only legitimately creepy footage in the entire film.  Bonus points for a solid kill, and for the presence of a strong female director (Amanda Payton) in a male-dominated genre.  “Cold Read” is about the nightmarish process involved with auditioning for an acting role, but any director will recognize it as attempt to vicariously punish actors for all the shit they put filmmakers through; and “Muse” is a story that opens with a dude milking a demon, which is a sentence I literally can’t hope to follow.  Wrapped around all this is the slight tale of two vapid teenage girls taking a Hollywood tour of scary spots, and watching each of the five segments along the way.

The filmmaking on display is inconsistent, as are the technical details, including frame rate.  The average viewer is likely to be turned off by HI-DEATH by virtue of its micro-budget, but anyone who enjoys a good descent into independent schlock will find plenty to enjoy.

*For me, it’s the Amicus TALES FROM THE CRYPT.

That’s all for now, Boils and Ghouls; it’s time to hit the pain meds and go back to playing the FRIDAY THE 13TH game.  Check back here next week as I begin spinning a new daily series, one that will catch readers just like flies.  Look out: here comes the Oxycodone.