When you call your site “Ain’t It Cool News”, you get a lot of really cool stuff come through the office: Comic books, one-sheets, DVDs, books, collage portraits of our avatars created from unused meds, dead birds (more than 75% or our readership is housepets), etc. And just like any workplace, we each try to stake a claim on what we think is the coolest, like a pair of sunglasses awaiting the embargo lift in a lost-and-found box at your local Popeye’s. I was delighted that I was able to take home this gem of a book we received from across the pond, WATCHING SKIES: STAR WARS, SPIELBERG AND US, by Mark O’Connell. 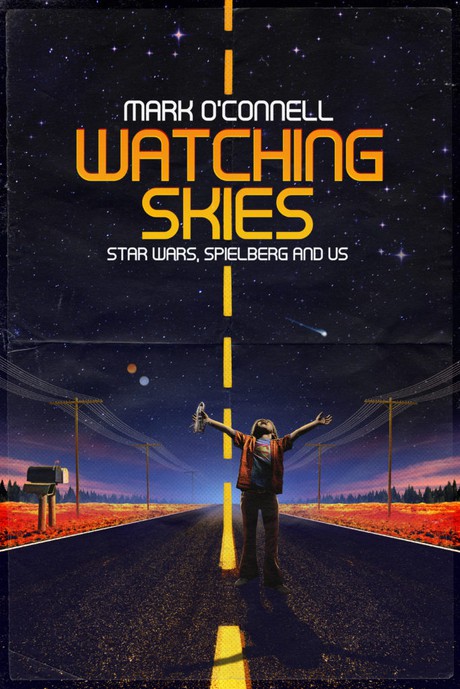 WATCHING SKIES tells the story many of us know, simultaneously universal and personal: growing up in the 80s to see cinema revolutionized and reinvented every year as our eyes ever-widened at the possibilities and spectacle of film. The way we grew along with film, and film with us, is a synergy of mimesis that few generations can claim. We found our imaginations bolstered by CLOSE ENCOUNTERS OF THE THIRD KIND, our fear of the unknown strengthened by JAWS, our love of fairy tales modernized by STAR WARS, our burgeoning attractions spurred on by Princess Leia in a brass bustier or Indiana Jones’s broad chest bared in the poster art for RAIDERS OF THE LOST ARK, and the ectoplasm scared out of us by GHOSTBUSTERS and POLTERGEIST. We saw sequels and prequels dominate the box office, with us on the receiving end of a marketing blitz that has since become the modus operandi for every major studio into perpetuity. We starved for movie news and sneak peaks like Noah on his ark awaiting a sign. We’d call the theater to hear the weekly recording of showtimes rattled off by some septuagenarian with a cleft palate to plan our conquest of the Biggest Film Release the World has Ever Seen… until next month when something bigger and bolder premiered.

Reading his book, I felt all those emotions swirling about me once more, like tiny saucers orbiting my body like those in *BATTERIES NOT INCLUDED. I felt understood. I felt like Mark O’Connell got it, got me, and I got him. I experienced an inclusion that often feels quite distant in these days of rent/mortgage payments, political divide, class inequality, mass shootings, and ever-increasing fears the world will crumble due to a tweet. I felt the wonder of youth again, the limitless potential of imagination, and the boundless joy of losing oneself in play. Of creating worlds alone in the backyard with little more than a few hunks of plastic and the practical backdrops of shrubbery, snow, or sand. 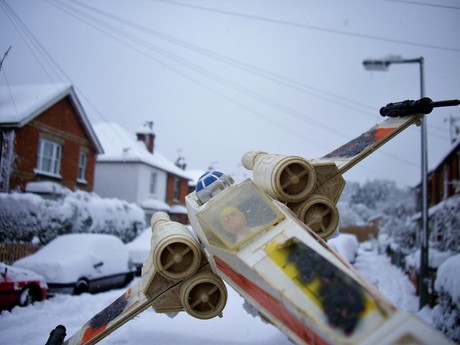 O’Connell’s experience is further compounded as these films not only give him a glimpse of worlds beyond the stars but also across the pond. The films created by those visionaries gathering in San Francisco in the late 70s gave many their first and formative views of America at large. Speaking from personal experience, they even gave Americans a view of what the greater country could be outside of their own ignorant borders. The stretching highways with their canary-yellow lines were often as alien to O’Connell’s eyes as the little brown creature with the giant head and affinity for Reese’s Pieces. He knew one day he would have to make a pilgrimage to this land and peek behind the curtain, and when he shares the experiences of these journeys, the reader blows a trumpet blast of victory alongside him. Particularly when he recounts his experience honeymooning on Amity Island, the setting of 1975’s JAWS. As we’ve built this kinship with him through our shared cinematic history, his victories become ours. Regardless of where we were in the world when we first saw these films, their indelible imprint changed our worlds, and their rising tide lifts all our boats together in cinematic harmony. He’s even given us a name: Sky Kids. 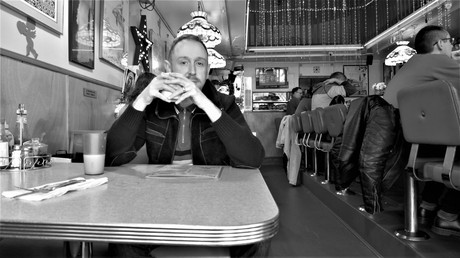 Mark O’Connell makes his personal experiences universal, and the reader will often find themselves applauding aloud his understanding of their individual responses to some of pop culture’s biggest missteps in our shared history. Who doesn’t remember being crestfallen at the forbidden knowledge disseminated by the track listing to THE PHANTOM MENACE’s soundtrack? And can any of us truly forgive SUPERMAN IV: THE QUEST FOR PEACE? I’m arguably the biggest Superman fan and I claim that movie as the worst film ever made. Ever. I mean, for shit’s sake, they took the world’s most powerful superhero and gave him powers he’s never had! For no reason! That’s inexcusable! Damnit, I’m mad now!

Sorry, anyway, Mark gets it. Explaining his fondness for SUPERMAN III, he writes “Because of timings especially, the latter sequels become the ones a lot of us grew up with, and sometimes experienced more of a personal dialogue with than the landmark originals. As I later discovered with the BOND films, everyone’s entry point into a particular franchise or saga is different. As many SUPERMAN fans came to the Man of Steel via first seeing SUPERMAN III and SUPERGIRL as were the first in line on the release day of SUPERMAN: THE MOVIE.”

Just as his victories become ours, O’Connell’s setbacks also resurface the tears of our own. The feature-release gaps between the US and United Kingdom, the seemingly interminable wait for a home VHS player, and the indignity of viewing RETURN OF THE JEDI before EMPIRE STRIKES BACK. When he loses a full set of Star Wars action figures on holiday in Crete, we feel the sting of the loss in our own nostalgia. I lost more than few Masters of the Universe figures on the tin roof of our home in 1986. Sometimes, photos are all we have to hold of these childhood treasures. 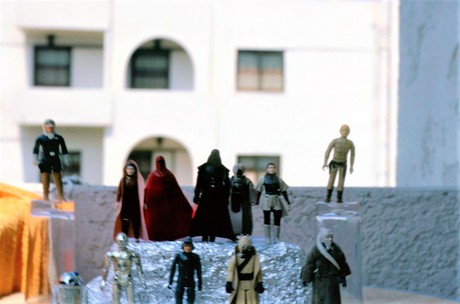 Ultimately, WATCHING SKIES is a nostalgic look back on our formative years, as visionary filmmakers helped shape our imaginations and ambitions. We Sky Kids grew to become the content creators and heralds of future delights today, and that, too, unites us. The strength of Mark O’Connell’s accomplishment is that he avoids cynicism almost entirely. He speaks of childhood with the reverence of childhood. Perhaps the most universal trait of the Sky Kid is that: we’ve yet to “grow up”. When the wonders of the works of Spielberg, Lucas, Donner, and their contemporaries stretch your eyes that wide, it’s almost impossible to dim the light that pours in.

Mark O’Connell is also the author of CATCHING BULLETS - MEMOIRS OF A BOND FAN. WATCHING SKIES: STAR WARS, SPIELBERG AND US is available right now through all major booksellers and is the perfect gift for that Sky Kid in your life who has everything, and the imagination still to give and receive so much more.

Until next time, “Keep Looking. Keep watching the skies…”