Howdy folks! McEric here with another book review, this one coming from repeat offender James C Harberson III, author of A DISGUSTING SUPERMARKET OF DEATH. Since my initial review of that collection of 22 dark mirror horror tales was published it has been nominated for a Rondo Hatton Classic Horror Award. I know who I voted for. 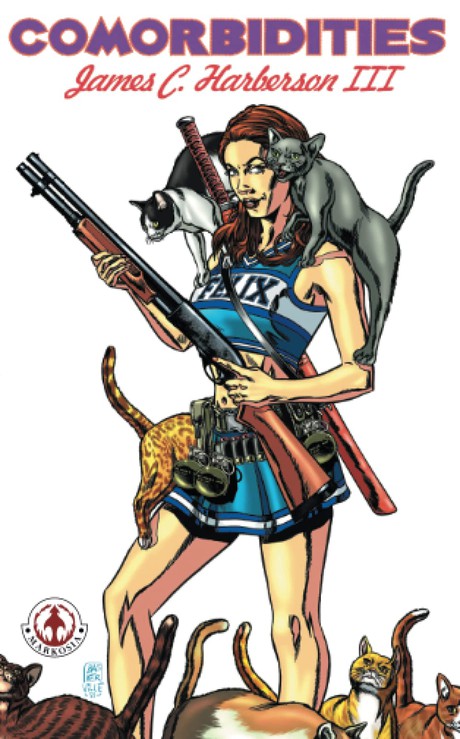 COMORBIDITIES features three novellas, spanning irregular topics while finding delight and squeamish fascination along the way. First up is 'Cat Problems" featuring the heroine Artemis Condon, whom graces the cover of the collection. Artemis is a cheerleader secretly crushing on a fellow pom-pommer who must suddenly become a crusader of justice when weaponized cats are unleashed on her idyllic town of Felix, Colorado. The story features a shady scientific organization (think Hawkins National Laboratory from "Stranger Things"), a trigger-happy military detail, unreliable local law enforcement, a militant shop teacher, and cutesy cat kitschery that inevitably ends up bathed in human blood. Heroes emerge in the unlikeliest of places as the carnage multiplies and the bodies pile up, with an ending that left me fondly recalling the 2015 film SCOUTS GUIDE TO THE ZOMBIE APOCALYPSE. 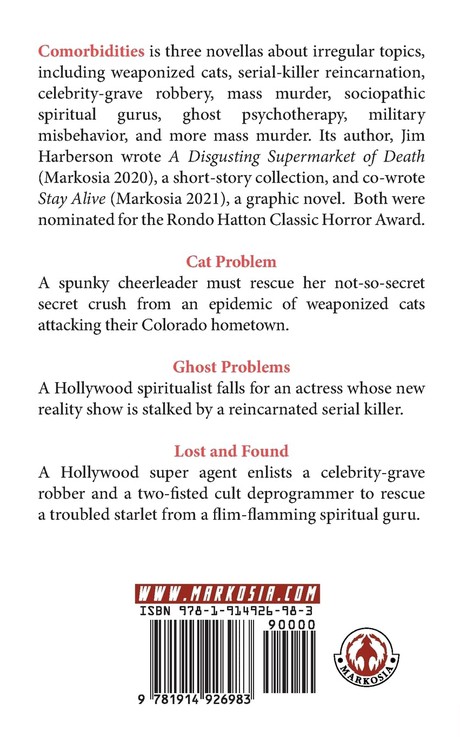 The second tale, 'Ghost Problems' was a standout for me. Protagonist Ajax Reynolds sees dead people, and they see him. Like Cole Sear from THE SIXTH SENSE or Frank Bannister from THE FRIGHTENERS, a clear influence that the novella wears on its sleeve (while two characters wear it on their torso). Reynolds becomes a sort of postmortal psychologist, helping the dearly departed through their afterlives through talk therapy and group sessions. An old friend turned enemy shares his gift, and when the latter finds a way to trade souls and bodies, chaos ensues on the set of a reality show. Intended to provoke cheap fakeout scares, it quickly becomes host to a reincarnated serial killer that wastes no time falling into their old habits, hacking their way through the cast and dangerously close to Ajax's newest fascination, actress Dodger Warwick. While 'Ghost Problems' features a lot of the shock and gruesome kills that seem to be Harberson's authorial style, it stands apart from his other works in the staunch virtuousness of its protagonist. A DISGUSTING SUPERMARKET OF DEATH featured practically zero redeemable characters, much like the roster of every popular television show of the last two decades. Morally dubious characters are all the rage, and why not? We live in an increasingly non-binary realm of good and evil, and our "heroes" have become far more gray as a reflection of this understanding. That's why it's so refreshing to read a character like Ajax Reynolds, who navigates a landscape trickier than even our own and does so with a fairly rigid divination. Even with all the murder, soul-stealing, body-bouncing, arson, and treason, Ajax remains steadfast as a good guy in a bad world. We rarely see that, even in fiction, and I hadn't realized how much I missed it until I found it again in these pages. 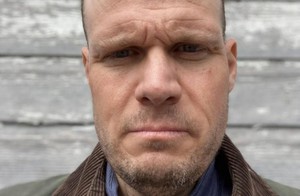 The last story is 'Lost and Found' and features grave-robbers, a cult-deprogrammer, a troubled starlet, a nefarious spiritual guru, a Hollywood superagent, an overeager celebrity journalist, and a plucky comic relief sidekick. It's fun, funny, and, get this: features zero murder. (Though there is some mild cannibalism.) Probably the most palatable of Harberson's tales for the average consumer, 'Lost and Found' excels in likeable characters in uncommon situations alongside villainous foils. With tension and humor aplenty, it is a fine sendoff to this collection that will leave readers new to this unique voice and those revisiting their old friend to voraciously await more from the macabre madman.

James C Harberson's COMORBIDITIES is on sale today at Amazon, Barnes & Noble Online, and Kobo. You can learn more about James as well as keep up with all his endeavors and order any of his previous titles on his brand new website JamesHarberson.com

Until next time, take care of yourselves and one another.