When a woman gets dropped off for a masked charity ball to be followed by an all-night, anything-goes sex party at the home of mysterious Christian King, known as X by the party goers, the questions emerge.  The first is "Who is this woman?"  Hints are dropped from the get-go that she has something potentially untoward in her past, but what that is, we won’t discover until later.  I enjoy a movie that presents a bit of mystery, so I love the way the story unfolds, albeit it takes a bit of time to get to the truly engaging elements.  While the initial mystery surrounds the woman whom we meet at the beginning, the tale is really about Christian, her secret fetish, and how she is perceived.  It’s a story of actions and consequences.  It pulls back the curtain, exposing the reality behind the illusion Christian creates for her party-goers. 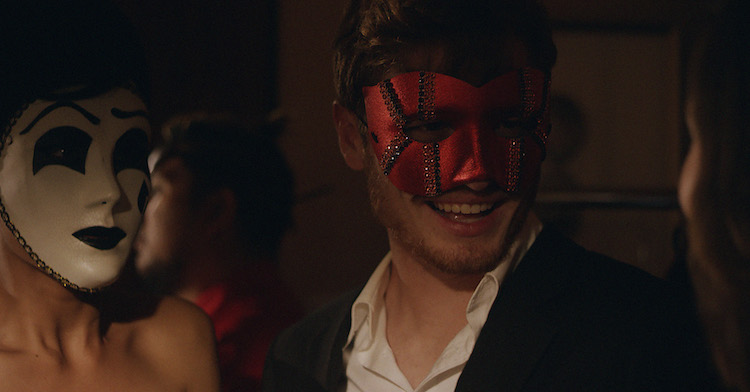 Taking inspiration from Shakespeare, the five-act tale escapes the similarities to EYES WIDE SHUT and ventures into unexplored territory. Surprised and intrigued by the inclusion of a variety of unexpected moments, I find myself enjoying the film, although it proves not to be exactly what I was expecting.

However, that being said, I legitimately enjoyed the film once it got going.  Writers Scott Ramsey and Katherine Jost mix some engaging, thought-provoking elements into the story.  Moments that, in a way, seem to come out of nowhere yet still fit perfectly into the puzzle that gets assembled before our eyes.

At times, the filmmakers spend too much time on certain camp elements that detract from the strong punches the story gives, and I would’ve loved some of those stronger moments to have been prolonged to increase the intensity and even discomfort.  Some of the acting proves a bit spotty, but not to the point where it’s overly off-putting.  Considering this is the first feature for almost everyone involved, I think it’s largely successful.