WEREWOLVES WITHIN is a Whodunit with Teeth!

If someone asked you where you live, you might say the city or the neighborhood or even give them your address, whereas I would simply respond “Under a Rock.” When given the opportunity to review the horror-comedy WEREWOLVES WITHIN I was sold on the premise and cast. I had no idea it was a video game prior to its life as a film, though I must say that did not detract at all from what was a wonderful viewing experience.

WEREWOLVES WITHIN is pure fun, exactly the reason to watch movies! The cast is top-notch, stacked with talent all at the top of their game. Sam Richardson (THE TOMORROW WAR) leads the pack with charm to spare as Finn Wheeler, the new Ranger in a snowy northern town teeming with secrets and tension poised to snap. He is acclimated by Cecily, played by Milana Vayntrub (“This is Us”, “Lily” from AT&T marketing), the local mail carrier and keeper of the town’s secrets. The rest of the cast is flawless, with standout performances from Michaela Watkins (TV’s “Casual”, “The Unicorn”) and Glenn Fleshler (JOKER).

In the tradition of CLUE, WEREWOLVES WITHIN uses the classic whodunit cocktail: take a smattering of feisty characters, add a murder (or severa), stir in a powderkeg and enjoy! And what a joy it is! I cannot recommend this film highly enough. Watch it, then watch it again with a friend.

I got the chance to chat with screenwriter Mishna Wolff earlier this month about the creation of the film and her love of flawed humans. It was my first Zoom interview and despite some initial technical confusion we were able to have a lovely chat, which you can see for yourself if you’d prefer over reading by clicking here.

Mishna Wolff: Nice to talk to you.

Eric McClanahan: Right away, how did you come about adapting the video game WEREWOLVES WITHIN into a feature film script?

MW: I was part of the Ubisoft Women’s Fellowship. I was the first fellow. It was a thing; they reached out to my agent and asked “Do you want to apply?” and I had met with them previously just as a general meeting and I was already a screenwriter but I didn’t have any produced credits and that qualified me to apply for the Ubisoft Women’s Scholarship, which is now open to anyone. When I did it you had to be represented by an agency and that’s no longer the case; they’ve made it more open. But basically they opened the vault and I got access to a lot of backstock titles and titles that weren’t slated for movie adaptations and they said “What’s the women’s point of view on this?” and I got to spitball with them on their titles. It was a really safe environment to be creative and just try things out and ask “what about this?” “What if we did this?” “What if we took this werewolf game and gave it some modern themes and set it in a gentrified town with some oil rights issues?” and that’s sort of how it all came together.

EM: So I had never played the game before, so are these characters based on avatars from the game or are they completely original constructs of yours?

MW: No, though there are avatars in the game. There’s an old crone and I think a man with a wart; I can’t remember. It’s set in Gallowstown which is a Medieval town with people around a fire in sort of the height of lycanthrope panic in Europe. So I asked “What would I rather be watching?” because I like movies and I thought I’d rather be watching THE THING, or CLUE, or AN AMERICAN WEREWOLF IN LONDON or like a really fun 80s werewolf movie like STEPHEN KING’S SILVER BULLET. So I thought “How do I create a town where everyone’s divided and everyone’s very different from each other in very divided ways?” You’ve got Emerson Flint who’s like a survivalist and I was watching a lot of Alaskan Bush People at the time; like a LOT of shows set in Alaska, actually. And then you’ve got Trish, and, well, she’s Trish. She’s exactly what you’d imagine someone named Trish would be like.

MW: Then you’ve got the innkeeper who’s kind of a victim, she’s very put-upon, Janine. She had a cat in the original version of the script.

MW: Very maternal, yes, but suffering., you know? Silently. She’s kind of based on my mom. And after I had set the stage for all that conflict, I knew our main character had to be someone who is totally afraid of conflict and just a really nice guy. This is his living nightmare is to walk into this town which is full of conflict. And that was the jumping off point for this story. “What would Finn Wheeler’s worst nightmare be?” 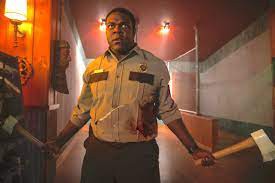 EM: I can see that. Now, you mentioned some of your influences when you were putting this world together and I picked up right away on CLUE. With the setting in one room, with everyone looking at each other, which begs the question: how many endings did you write?

MW: [laughs] Only one ending.

MW: Yeah. And that ending was, I don’t know why, but I start everything with the end in mind, I always work backwards, so the ending was the first thing I thought of and then everything sort rewinded from there into this somewhat joyful cacophony of disagreement. And that’s the sort of thing I thought about; like “What does Finn believe in? What is his credo? What is his worldview?” And I think it’s summed up really perfectly in that scene around the fireplace where the divisions and the shouting just get to be too much for him and he smashes the teacup and gives a really moving speech about community and our common humanity, and then… the rest goes the way it goes, but he’s a connector and that worldview is central to the movie. That idea that humans owe each other something.

EM: Yeah, I picked up on the themes of that as well as environment with “Walden” and Henry David Thoreau, which as a writer I really appreciated. Now, the characters’ voices were so well-suited to the actors who portrayed them. What, if any, hand did you have in that casting process?

MW: That’s one of the things that directors really do well is cast movies, and Josh is a great director and he brought a lot to the casting process. He was really instrumental in casting all those actors. I looked at lists and I said “Oh, wouldn’t it be cool if that works out?” and a lot of them did say yes and that was my whole contribution to the casting process. Besides writing characters that people would want to play. 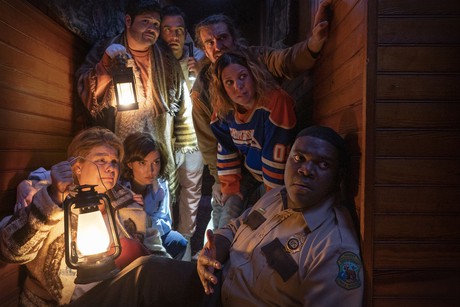 EM: I agree. And what a cast it was! So many faces that are familiar, rising stars, and you’re saying “I remember Such-and-such from this thing or this thing” and yet no one overshadowed anyone else with their star power, which I really appreciated for an ensemble piece such as this.

MW: Part of the appeal of a comedic ensemble is that it does not rely on getting, like, Will Smith, you know? Sam Richardson is a plenty big enough star to helm a comedic ensemble and all the actors were really great improvisers who brought so much life and breath to these characters that I’d been living with in my head for a year, as did the director; he really colored things in a lot. It was a really beautifully blessed process.

EM: And it certainly shines through in the finished product. So, I gotta know what you’re working on next.

MW: Oh,I don’t want to jinx things and everything’s in a kind of nascent stage right now. If I had something else coming out in six months I’d say “Oh yeah, you gotta check this out.” But I am working on more things in the comedic genre. I’m a bit of a restless person, maybe a little ADHD, and I like things that have a certain amount of action in them. I was a stand-up for ten years so if I can get a laugh I’ll get it. If it doesn’t interrupt the story and I grab a laugh here or there from just the follies of fun characters with great flaws I’m gonna do it.

EM: I like that. So, I was going to ask about the dark comedy, the horror comedy aspect, but I think you just hit on it there with the--

MW: I like human flaws. I find them entertaining. I like flawed people; there’s plenty in my life. They bring the fun. So this movie is full of flawed people that when combined are entertaining. We’ve got a neighborhood guy who can’t keep his hands off any of the women in town and he’s kind of creepy pervy. And the classic, I don’t want to say “White Trash” couple, so what’s a good euphemism?

MW: Yeah, we’ve got your colorful toxic couple that is a little volatile and fights wonderfully. And the very put-upon innkeeper who is always a victim of her own generosity. And a whole cast of characters who can’t pronounce the word “Lycanthrope.”

EM: I also liked the inclusion of the millionaire tech-bubble couple; very fish-out-water but they still seemed very much a part of the community in a real way. I appreciated that.

MW: I think in these certain rural places outside of big cities you get people who move to a certain place for the nature and there might be a little bit of a clumsy fit with the locals especially when their sexual orientation doesn’t exactly jive with everyone in town.

EM: I appreciated their empathy, as well, noting that not everyone has money and we shouldn’t judge people for wanting things differently than us.

MW: That was the thing with the pipeline. Environmentalism, sure, is part of the film but so is the fact that when you get to these small towns with a fracking project or a pipeline project it could mean what seems like an obscene amount of money for people whose land wasn’t really worth that much before and it’s hard for them when a bunch of environmentalists comes along and say “No, you can’t take that money.” I wanted to be sympathetic to that voice as well. I wanted to represent the fact that that money could mean a lot to certain locals and talk about gentrification in that way.

EM: Well we have time for one more question so I’d like for you to sum up what someone can expect from a viewing of WEREWOLVES WITHIN?

MW: It’s a whodunit with teeth. It’s got a lot of fun characters, big archetypes, and just when you think you know where it’s going, you do not know where this movie is going. It’s just one of those movies where you walk out of the theater and say “That was a good time!”

EM: I couldn’t agree more. Thank you so much for taking the time to talk to me. I really enjoyed watching it and I’m probably going to watch it again once we’ve wrapped up here.

MW: I’m glad to hear it. I think you’ll see the bread crumbs if you watch it again.

EM: Yes, exactly. Thank you so much and best of luck with what you’re working on next. 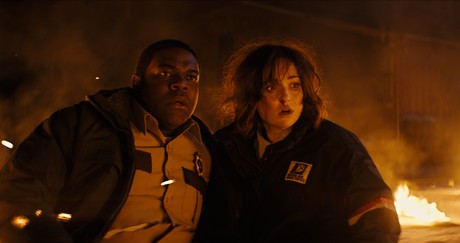 WEREWOLVES WITHIN releases in theaters today and will be available to rent everywhere on July 2nd.