Why are you not watching BLOOD QUANTUM right now?

Y'all! You all! Seriously... Stop reading this and go watch BLOOD QUANTUM on SHUDDER right now.

Seriously. It's so good.

You need MORE? Okay, let me run through the reasons why I absolutely loved this film and couldn't stop thinking about it days after I viewed it.

First of all, what BLOOD QUANTUM does so well is it follows a classic structure of zombie infestation film to the letter and STILL finds a way to shock and disturb its viewer. It is a by-the-numbers Romero flick, where the villains aren't the undead but rather the living, but subverts your expectations of it while still playing out EXACTLY HOW YOU IMAGINE IT WILL. I can't even wrap my head around the genius of this film. I was watching the screen saying "This is going to happen..." and then it would happen, with a zany twist I didn't imagine, and I would stare on in wide-eyed wonder. It was like a roller-coaster I'd ridden a hundred times with four extra loops thrown in at unexpected junctions. 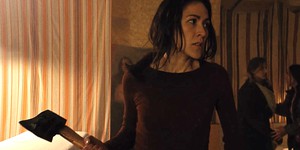 Perhaps my favorite aspect of the entire film is its opening, wherein the characters and the viewers learn of the undead rising in a manner which I, personally, have been anticipating since the genre began: with animals. I'd always wondered why all this reanimated flesh was running amok in our world with no regard for the animals beneath Man, and BLOOD QUANTUM finally gave me zombie fish and zombie dogs. Why did I have to wait so long? From there it goes into a terrifically unnerving title sequence of dizzying establishing shots of the Red Crow Reservation that somewhat familiarize the viewer with the setting while still unequivocally declaring "You don't belong here."

BLOOD QUANTUM, as I've said, follows the Romero trope so closely that it's damn near gospel, yet it still manages to rise to levels of gore and humor that set it apart from its zombie brethren. By telling its story through a focused allegorical lense of colonialism and tribal subjugation, it paints clear lines of heroes and villains long before the undead complicate matters. When the horror kicks in, we see, as is patent with this genre, that Man is the true Villain, but in ways that subvert our expectations, at first, then seem so obvious as to make the film and its movements all that more intimate. It is a story that is racial, geographical, generational, and ecological all at once. For all of its blood splatter (and there is so much) it is a relevant and important film that demands to be viewed by as many people as can stomach the gore. 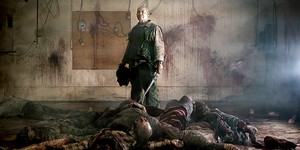 And there is gore, my friends. While watching this film I had to come to terms with what horror means to me. I've always appreciated a good horror film and I rarely turn my head in disgust at shocking cinema, but I don't considrer myself a horror "fan." I believe this is chiefly due to the fact that I've since met horror "Fans" and they're... well, they're not me. But at the same time I can't imagine any of my other friends gleefully sitting through this film as I did. It takes risks, and they pay off, as far I'm concerned. This movie plays so well on every level of the horror trope and I fear that my praise of it pales in comparison to how good it actually is. 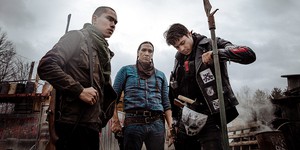