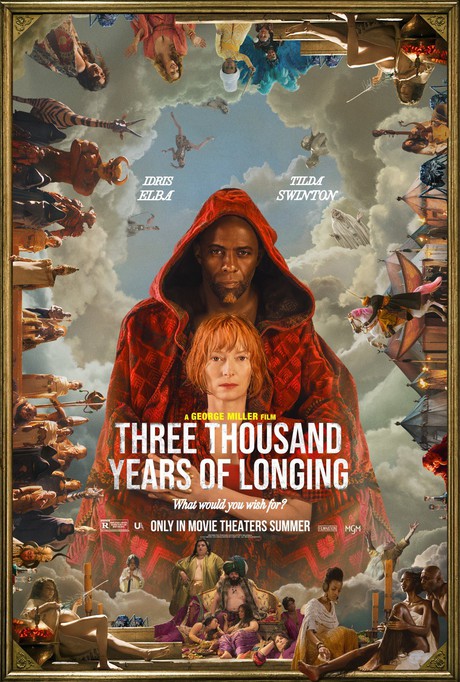 Hello, movie fans and welcome once again to the House of Macleod movie review corner. Today we look at legendary director George Miller’s sweeping fantasy drama Three Thousand Years of Longing.  Starring Tilda Swinton, Idris Elba, Pia Thunderbolt, Berk Ozturk, Anthony Moisset, Alyla Browne, Sage Mcconnell, Abel Bond, Aamito Lagum, and Peter Bertoni and from a screenplay by Miller and his daughter, Augusta Gore, Three Thousand Years of Longing is a tale about storytelling, love, and at its heart, Desire, which I believe it communicates in a very grown up, adult sort of way.

The movie opens with the focus on Tilda Swinton’s Narratologist character Alithea Binnie who during a trip to Istanbul to take part in a conference, happens upon a mysterious antique bottle in a curio shop in the city's marketplace. Drawn to the bottle, she purchases it and heads back to her hotel room where she tries to clean it up accidentally releasing a Djinn, played wonderfully by Idris Elba. The Djinn proceeds to offer Alithea three wishes, but being a scholar and having read tales of wishes going horribly wrong and devious genies, she decides to have the Djinn recount his tale of how he came to be in her possession. What follows is an anthology of fantastical tales set throughout time of wonder, love, betrayal, murder and longing.

Now, this is one of those movies that is definitely worth your time even though so far it has only earned $11.7 million from a budget of $60 million at the box office, which I for one, think is a terrible shame given this films incredible art direction and Tom Holkenborg’s gorgeous soundtrack. John Seale’s cinematography is outstanding and uses far away lands, rich colours and outlandish costuming to excellent effect making for a visually striking slice of filmmaking. It’s perhaps not to the standard of his previous collaboration with Miller, Mad Max: Fury Road but it is still some absolutely outstanding work.

The screenplay is based on the lead tale from the anthology of stories ‘The Djinn in the Nightingale’s Eye’ by A.S.Byatt and does a fair interpretation while mixing in themes of solitude, loneliness, unrequited love and regret. Although it does get these and many other themes across to the viewer, I felt it could have had a much better storytelling narrative, which is deeply ironic given the context of the plot and Alithea’s opening monologue.

So, I’ll wrap up this short review with one of the themes of this piece, don’t judge a book by its cover or in this case, its box office receipts. I absolutely enjoyed the hell out of this strange little story and although I may never watch it again, I am glad that I watched it at least once which, I thoroughly recommend you do too. In my opinion, it was absolutely deserving of the six-minute standing ovation it received at Cannes. Three Thousand Years of Longing is still in cinemas now but hasn’t as yet set a streaming date. Let us know what you thought about the film in the comments and as usual, keep it cool…