Hey, friends. Barbarella here. I love a good heist movie, so when I saw the trailer for THE PAY DAY, it seemed right up my alley. After checking it out, I thought, “That was cute,” but cute is not excatly what I wanted from a heist flick. In fact, it should have been promoted more as a rom-com, because that’s really what it was.

Written by Sam Benjamin and Kyla Frye, the story follows a struggling woman (Kyla Frye) whose exceptional tech skills lead a crime boss (Simon Callow) to entice her with a get-rich-quick-while-getting-revenge-on-a-former-employer scheme. On the job, she encounters an attractive rival (Sam Benjamin), causing the plan to go awry.

I enjoy a lot about THE PAY DAY, from its super-silliness to some of the characters and performances, but the lack of cleverness regarding the heist and the fact it veers into implausible scenarios one too many times disappoint me. Yet, a spectacularly entertaining elevator scene somewhat makes up for that.

Simon Callow’s over-the-top performance makes it feel more like he’s a caricature of a crime boss than an actual one, serving to remind audiences that this is a comedy, not a crime drama. Not that one really needs to be reminded of that: the Pink Pantheresque music that slathers the scenes does a sufficient job ensuring you never forget this is intended to be silly. And silly it is.

Aside from that aforementioned elevator scene, I think the silliness may be what I appreciate most about this, though. Sometimes, you just need that. Frequent ingestion of violent, dark content can wear on a person, so it’s nice to have something so light-hearted and goofy to counter-balance the heavier material. Some of the dialogue could have benefitted from some reworking, and some scenes are completely ridiculous, but I find myself laughing for one reason or another during a lot of the scenes, so I guess that makes it a successful comedy.

My biggest issue deals with expectations. I go into it thinking THE PAY DAY is a heist movie, but a good heist movie requires some ah-ha moments, where the reveal on how the heist is accomplished impresses a viewer. Although we get some reveals here, nothing achieves a level that even remotely impresses. I would have preferred more thought being put into a clever heist than going towards developing the romance.

Not that the romance is developed much here; it doesn't grow all that organically. I would have liked more moments where we see the characters transition in their feelings towards each other. Instead, they leap frog from rivals to love interests too effortlessly, and I just don’t buy it. 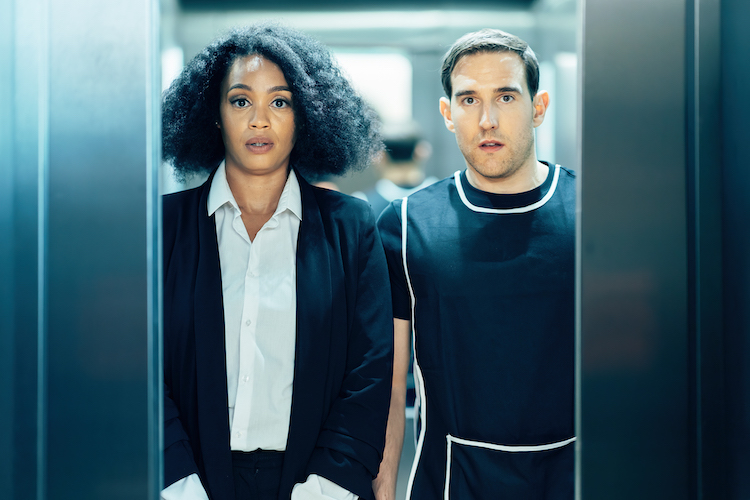 The other issue is pacing. Some earlier scenes take too long to play out, but then it rushes to the ending at a point that could have benefitted from taking more time to move the characters towards that point. Oddly, there’s what feels like a set up to a more dramatic climatic scene, but then nothing happens with that, and before you know it, the whole story gets wrapped up neatly with a bow. More conflict would have served the movie well, as it just doesn’t offer the intensity required to elicit my investment in the outcome. I wanted a Texas Giant rollercoaster of emotions, but this is a kiddie-coaster, and the only time my heartrate increases is when Sam Benjamin takes off his shirt. (Sorry if that objectifies him, but it’s the truth.)

All in all, even though it falls short of my expectations, I don’t actually dislike THE PAY DAY. It makes me laugh and leaves me feeling a bit goofier than before I watch it. Given the frequent barrage of negativity everywhere, having the opportunity to wallow in silliness is not a bad thing. It’s not a bad thing at all.

THE PAY DAY is available now on digital in the United States and will be available in the UK December 5. Check out the trailer.