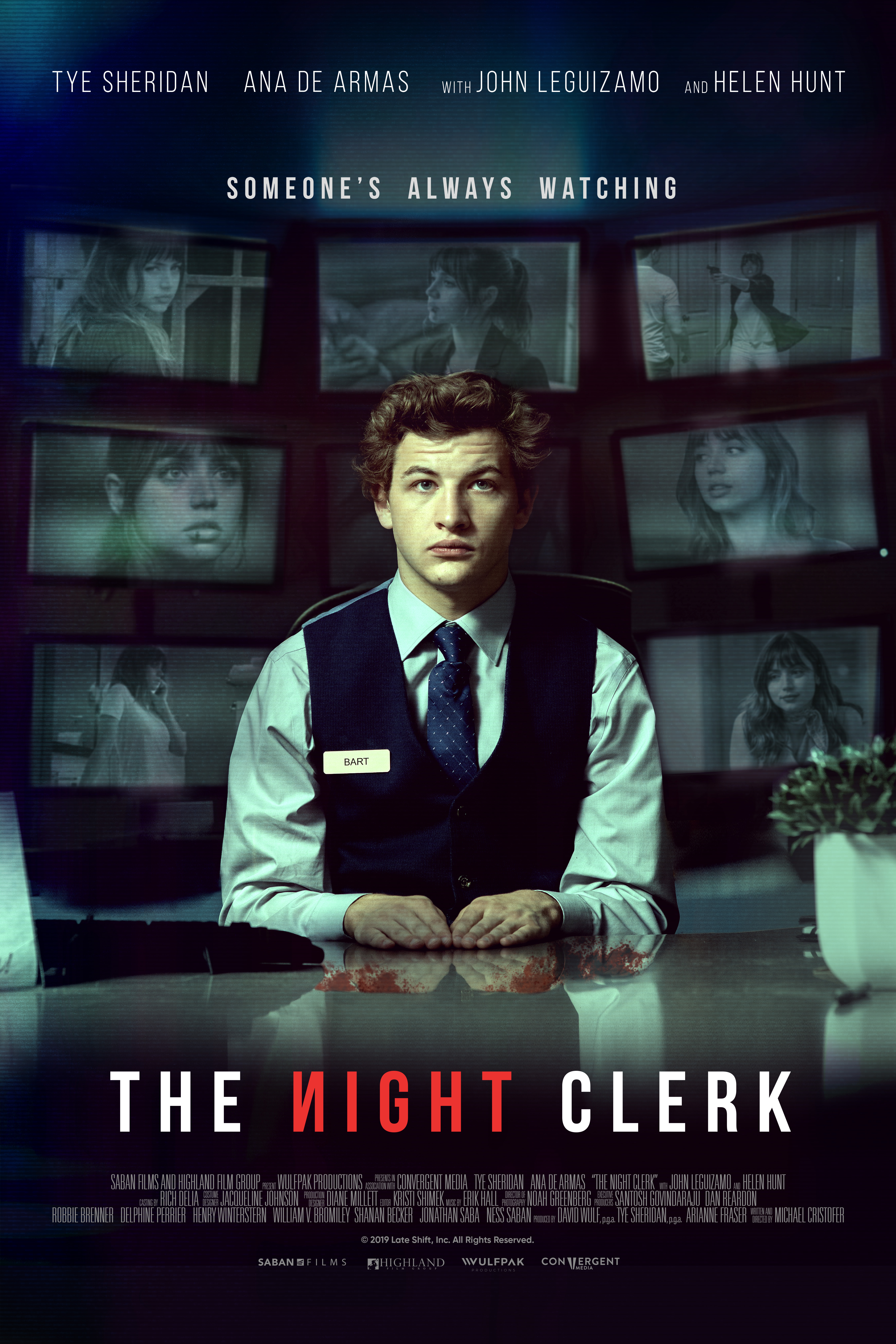 Hey friends, Barbarella here to share my thoughts about Saban Films’ THE NIGHT CLERK, which hits theaters this weekend.  A hotel night clerk, Bart Bromley (Tye Sheridan) struggles with an affliction and lives at home with his protective mother (Helen Hunt).  Bart has a secret: He voyeuristically watches what goes on in the hotel rooms via cameras he’s hidden in them, but it’s not always as perverted as one might think.

When a crime occurs at the hotel, Detective Johnny Espada (John Leguizamo) directs his investigation towards the socially awkward night clerk, increasing Bart’s mental uneasiness.  The investigation isn’t the only thing causing stress for the young man.  When a beautiful woman, Andrea (Ana de Armas) comes to the hotel, his life becomes upended.

Written and directed by Michael Cristofér, THE NIGHT CLERK doesn’t have quite the suspense or uncertainty of an edge-of-your-seat thriller.  In fact, most of what occurs could be predicted if you’ve already seen the trailer.  Generally, if I find a film overly predictable, I tend to not enjoy it.  There have been a couple of exceptions: THE LODGE and Leigh Whannell’s UPGRADE (2018).  (I didn’t expect any backlash from complimenting the latter film, but apparently saying that I really enjoyed it even though it was predictable was taken as an insult by the director and his fans.  It’s weird how you can attempt to put something positive out into the world and have people twist it into something negative.)  I wish more people understood that if you watch as many movies as I do, almost all of them have some degree of predictability.  There are certain tried-and-true formulas to which writers and studios like to adhere, and certain elements of foreshadowing that become increasingly more obvious the more films you view in those genres.  I honestly don’t know how many people would be surprised by a twist that I am able to predict from early in the film, but I know through conversations that a lot of people legitimately get surprised, and I think that’s wonderful.  Even if you’re like me and often know how a story will end well before it does, predictability doesn’t have to be a bad thing.  How many people didn’t want to see TITANIC (1997) because everyone knew how it would end?  But, James Cameron’s film proved that the outcome isn’t necessarily as important as the journey.

THE NIGHT CLERK’s journey is decidedly interesting.  Because it views Asperger’s Syndrome from a variety of perspectives, knowing where it is heading doesn’t detract from my enjoyment in any fashion.  In fact, it gives me the opportunity to really contemplate the psychology of it all.  People fascinate me on many levels, and seeing interactions among the characters in this film gives me much to consider.  The film takes a small peek into what we think other people think about us and what we think about ourselves.  Ethel Bromley (Helen Hunt) deals with her son’s condition the best she knows how, and she has a moment that makes some water move into my eyes.  I’ve never personally been around someone with Asperger’s, so I find the character of Bart to be particularly intriguing.  Tye Sheridan effectively telegraphs the character’s awkwardness with a quality that at times feels much like childhood innocence, while at others seems a bit creepy and off-putting.

While Tye Sheridan gives a convincing performance, my favorite comes from Ana de Armas as Andrea.  Her recent portrayal of Marta Cabrera in Rian Johnson’s KNIVES OUT put her at the top of my list of ones to watch, and I find her performance here just as eloquent. 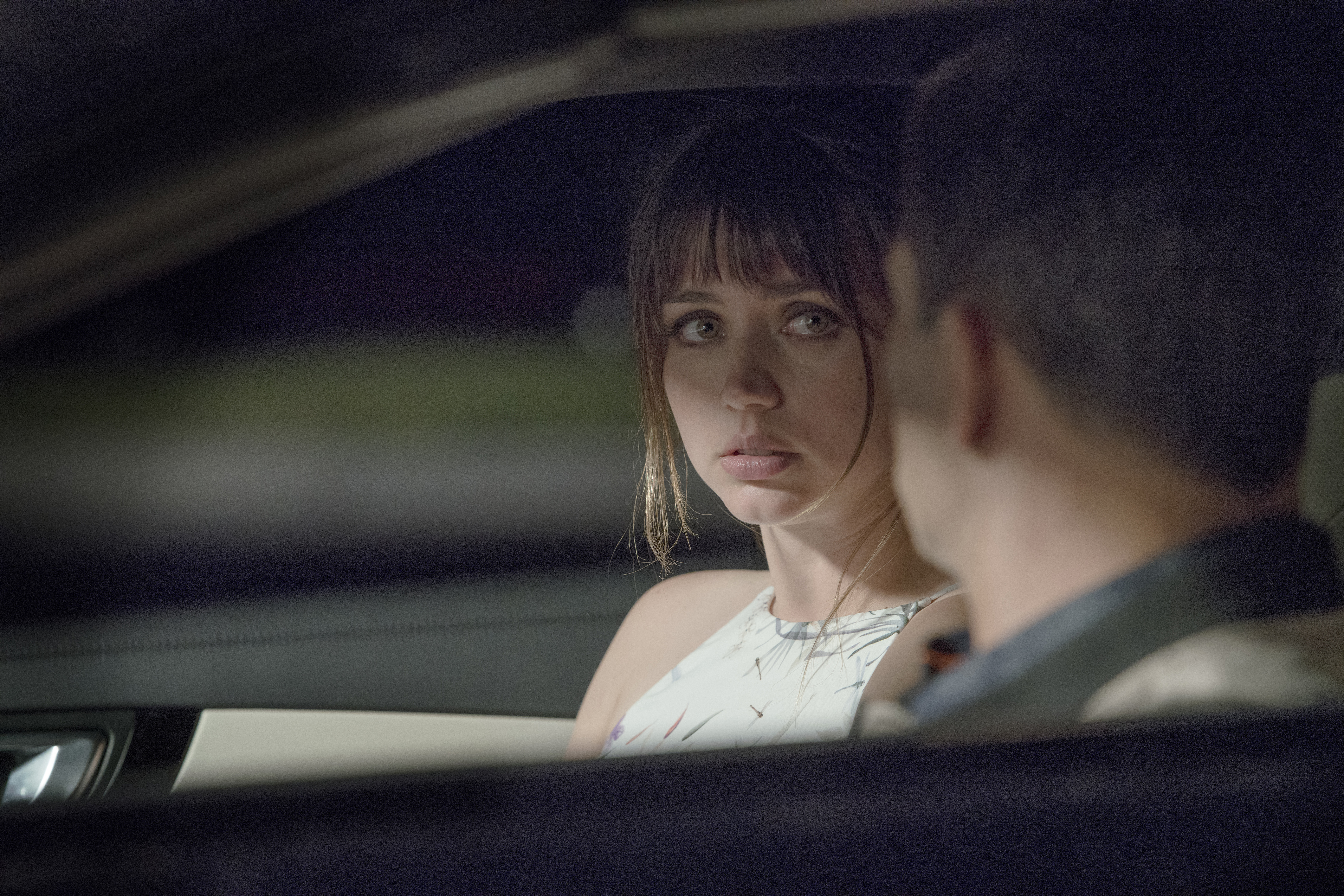 While the film doesn’t make fun of mental illness, much of its comedy comes from Bart’s inability to apply appropriate filters in conversations.  One scene involving a car salesman proves particularly awkward and comical.  In fact, I find THE NIGHT CLERK more amusing than I had expected.

Speaking of expectations, I believe that they often factor into one’s experience of a film.  If you expect a riotous comedy, then get a dramatic art film, you most likely would not enjoy the film, or at least not as much as you would have if you’d known what you were about to experience.  I’d like to make you aware of what to expect here.  This is not a sitting-on-the-edge-of-your-seat Hitchcock film.  Sure, there’s some tension.  There’s even some mystery.  But overall, it feels less like a crime drama and more like the story of a mentally handicapped man dealing with a particularly stressful situation.  It certainly has elements of the former, but the latter dominates.   THE NIGHT CLERK proves intriguing, and even though it isn’t what I originally expected, I still genuinely enjoy it.