Teressa Liane Discusses the Physicality of Working on THE REEF: STALKED

Hey, friends. Barbarella here. Teressa Liane has garnered a following for her role on "The Vampire Diaries," but now she’s in something else with teeth. Starring in THE REEF: STALKED, she and her gal pals find they’ve been targeted by a great white shark off the coast of Australia. In theaters and streaming on Shudder July 29th, THE REEF: STALKED is filmed in one of the more scenic areas off the Australian mainland. I had the opportunity to speak with the actor about the location, the physical requirements of the role, and a few random ideas. Having been fortunate enough to have visited the area previously, I had to open with asking about the location. Check it out!

I’ve been to Australia before, and as I was watching, I realized you’re in the Whitsundays, which is such a beautiful area. Would you discuss working in those locations? How distracting is the scenery for you while you're working? 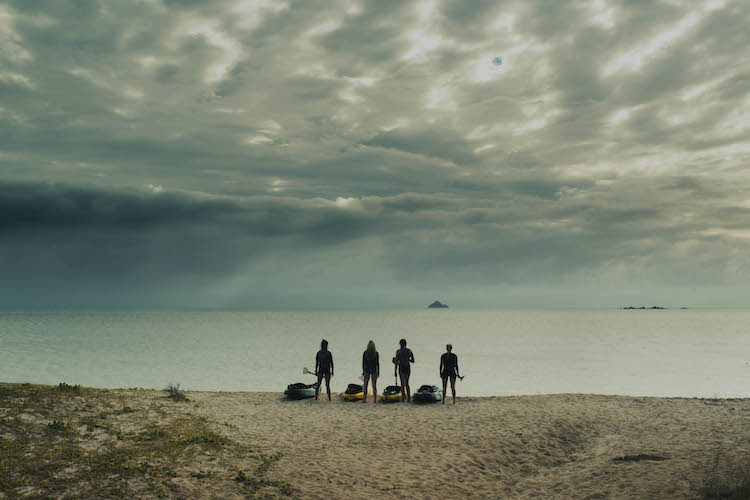 “Yeah. I love that you've been there, as well. That's so awesome. The first week when we got to enjoy the location just as ourselves was great. I think before getting into the shoot, it was definitely something we could appreciate a lot more openly. I mean, first, just seeing the visuals alone are so breathtaking, and [there's] just this simple beauty. I think we knew we were very, very fortunate to be out there. A lot of times, the girls and I would be out on the kayaks, and [would] just stop and say, “How lucky are we?” We knew it. I guess once you're in the scenes, and the characters start to take over, it can get lost in that, but it was definitely a beautiful place to then be able to switch off and just reconnect with yourself.”

Do you do a lot of kayaking and surfing and that kind of stuff outside of work?

“No, not particularly…until now. Post this, I will be doing more kayaking, for sure. It's very funny how... There's this whole running joke. I ended up naming my kayak, so its name is Sterling, and I became so, so attached to it, because once you're out there in the water, it does become almost this extension of you. It's this newfound love now. Whenever I see a kayak, I'm like, "I need to get out there.”"

That's pretty awesome. What appealed to you about the script and your character, in particular?

“I think there were a few things, but when I first read the script, the main thing I connected with was her strength despite this vulnerability that she has there. I've always loved characters that have the two running alongside each other, that sort of vulnerability but the ability of such a deep strength that maybe they don't even know themselves. I think that was something that I really loved as I read the script. But then, the more I read it, there were just different aspects of these different characters and how distinct the girls' personalities were. I loved that there was this strength in sisterhood and how much that was allowed to just exist without pushing drama unnecessarily. I think I just really loved how much there was a story of family, as well, for her. I really accessed that because that's super important to me, as well.” 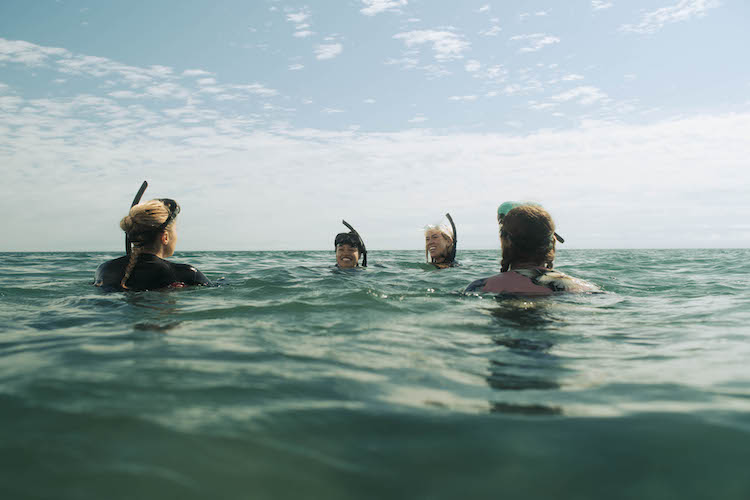 What all went into preparing for the role?

“More than other characters, it was definitely more of a physical preparation, as well as emotional, but the physical became pretty important to me because, I mean, we knew that we'd be filming out in the water. We weren't sure for how long and what exactly would be expected of us, so I made sure that I got all the swimming training that I could, just to really top it up so that it was at a level that made sense for the character.

“I wanted her to look like she knew what she was doing out there without a second thought, so I did a lot of that. Emotionally, I just really wanted to access all of the things that she's dealing with throughout the film. I really did my homework on things like PTSD, trauma, domestic violence, and how it [not only] involves the victims, but also the family members that are there almost experiencing it alongside. It's just the things that come from feeling like you want to help save someone. I really immersed myself in that sort of a world as much as I could so that I had this understanding. But also, it took root within me so that once I was running the scenes, it was there.”

“I think it was about six to seven weeks, five or sometimes six days a week. Yeah, pretty long days. We tried to make the most of the daylight, really, just because the tides made things pretty challenging.”

Did you feel like you were getting a pretty good workout during the shooting? 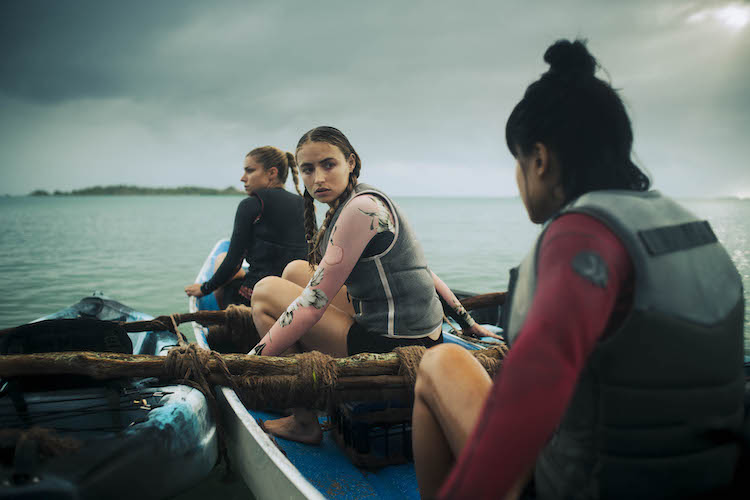 “Yeah. I was so glad I did all that swimming training before. I mean, I've done stunts before, but this is… when you're working against or with the water, it's something else. My arms, they definitely got a workout. I gained some muscle. I'm pretty sure people noticed it by the end of the shoot, but I think there was just something about owning that. I love that kind of stuff, the challenges that come from something physical like that. It really just helps you take them on even more and just embody them in a different way.”

Would you ever actually go with those characters to any potentially dangerous adventure?

“Okay. Let's see. I think with Jodie and Lisa, the two of them really helped to balance the friendship group, I feel like. They're really good for keeping an even keel of things. Jodie's great for the tactical, logical side of things, but Lisa is really great for keeping up your spirits and staying motivated. I'd have to take Annie as well. I know she'd find her way. I would take them all.”

What about the cast? Would you go out and do adventure activities with them?

“Yeah, definitely. One of the coolest things about the cast in this film is that all of us genuinely loved being outside and just getting out there and being active. They're also just really cool girls. We really got to bond a lot through this. I think because of how emotional the script is and what it requires, we really got to a vulnerable place pretty quickly. We really connected and have stayed in touch since the shoot. Yeah, I love them so, so much.”

What are your thoughts on sharks?

“I think they're gorgeous, impressive animals. You can't help but be in awe of just, basically, this being essentially coming out of this prehistoric stage and just existing. I don't know, there's just something super mysterious about them. I think they're pretty cool.” 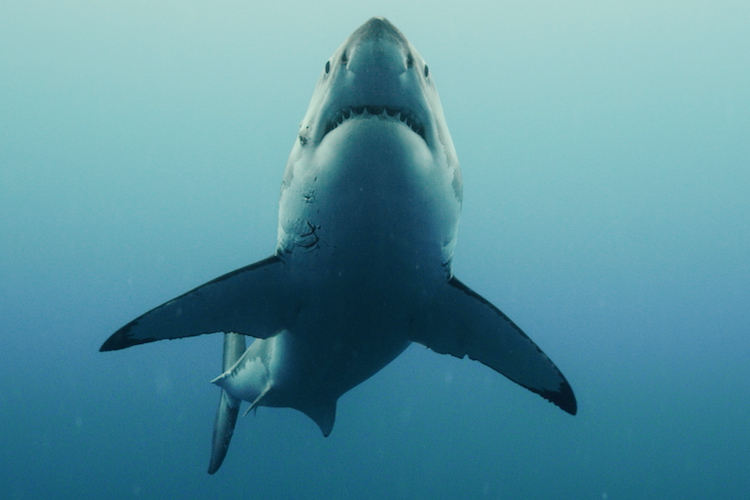 “Oh my gosh. That's such an awesome question. I mean, I don't know, they'd be so selective, depending on what was available for them to eat. Maybe they would just take whatever they could, but I wonder if it depends on if the daylight was an issue. I mean, being a vampire, they would have just all of that additional time, which means experience and knowledge. I feel like they'd probably have some really creative ways of trapping their victims.”

What kind of supernatural being would you like to see go up against a great white shark?

“Wow. This is tricky. If there were, in any way, an underwater unicorn, that would be pretty cool. Something like that.”

You were also in a movie called The Killer Fan. What's your most memorable or bizarre fan interaction? 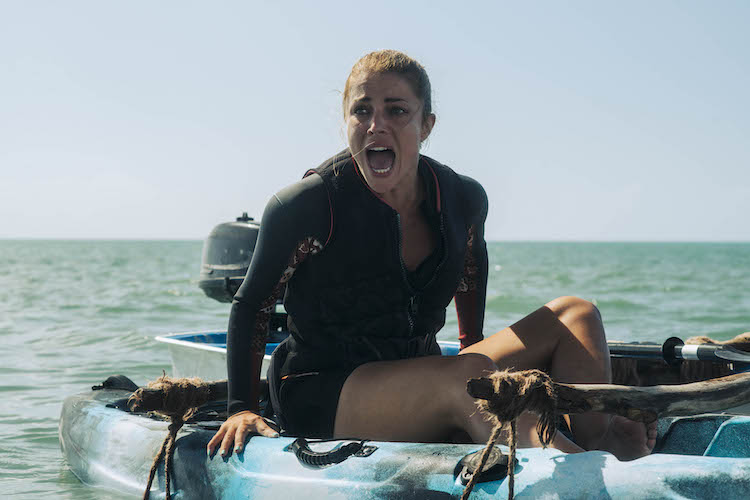 I mean, I've been pretty lucky where pretty much everyone that has approached me has been an awesome, really friendly person. I mean, I've seen some things online, for sure, that exist that are a little questionable. It's interesting what some people will Photoshop, and I guess they find entertaining, so I don't know if I'm encouraging people to do that. Don’t do that. But yeah, I've seen some interesting things as well as, I guess, archives of different body parts that apparently exist. I think that is one of the weirdest things I've seen.”

Speaking of choosing, if you want to choose to watch a film this weekend about a shark going after women kayaking on the ocean, THE REEF: STALKED, starring Teressa Liane, comes to theaters and Shudder Friday, July 29.  Check out the trailer!