We Get a SPIDER-MAN: NO WAY HOME Teaser Trailer and McEric Has Opinions

Well, dreams do come true! We've finally gotten an official SPIDER-MAN - NO WAY HOME "teaser" trailer, and it reveals A LOT... while also giving us a lot of new questions we might haven't yet posited. I watched this last night at 2am and I was overwhelmed with opinions and questions and befuddlement, so let's go through it together and piece together what we can.

First things first, put your eyeballs on this:

WOW! Just, wow! This seems far more straightforward than most Marvel trailers I've seen thus far, and I had to put "teaser" in quotes because it clocks in at three minutes. After poring over fan-made trailers for the past few years it's disarming how forthcoming this trailer is with the plotline and main story device. Is it really as simple as Peter asking Dr. Strange for a Mulligan and Stephen winkingly agreeing? Doesn't that seem far too easy, and suspiciously out-of-character for the stoic Strange we dealt with in the Infinity Saga?

Let's take it step-by-step. The trailer opens with an action preview and then settles on Peter and MJ relaxing on a rooftop while she reads aloud sensational media theories about Peter meant to spread fear about the mysterious Spider Man. Cut to a moment that appears to be either directly after or concurrent with J. Jonah Jameson's outing of Peter as Spider-Man followed by an interrogation by the DODC, the Department of Damage Control. Recall that in the comics the DODC was co-owned by Stark and Wilson Fisk, aka the Kingpin. We see the torso of a man with a white dress shirt and skinny black tie slam some case files on the desk next to Peter, who looks up with bewilderment. I'm hoping this is Charlie Cox's Matt Murdoch, as Parker will need some top notch legal defense, as well as some superhuman understanding.

From there we get another tender moment with Peter and MJ, working through the human element of notoriety. She asks if he might be relieved to have the cat out of the bag, noting he'd no longer need to hide or lie, which he admits he felt bad about but couldn't rationalize how to broach the subject. We see a mass of protestors outside his school, showing just how inconvenient and dangerous his current life is. We see that Peter and MJ are holding hands, with Ned Leeds close behind them and what is likely a bleached-blonde Flash Thompson. Once in the school Peter is the focus of attention, with all eyes and cameraphones on him as he tries to move on with his life. We have a POV of someone entering Peter's living room, the cherry lights of emergency vehicles cascading past the windows, causing he and Aunt May to tense up, and we see that Ned and Aunt May are also being questioned in an official setting. Peter's predicament is clear.

So far, all of this seems pretty consistent with the story, and Peter's reasoning that he should ask the magic man that he knows for help is very much in-character for a young man in an extraordinary condition. Peter goes the Sanctum Santorum and this is when things get really weird.

Upon reflecting upon some Halloween decorations, Peter decides to visit Dr. Strange. We can be fairly certain its October. Peter enters the Sanctum and it is completely frozen over, with Strange levitating at the top of the stairs while an unidentified man shovels snow off the floor in the foyer. Peter's head blocks some of the stairs but it appears that they have been repaired from Banner's fall five plus years earlier, so it's safe to assume also that his hole in the roof has been patched, so why the snow? Is it a Cold Day in Hell? Stephen is wearing sweatpants, an alma mater sweatshirt, and a puffy jacket beneath the Cloak of Levitation. He carries a coffee cup with a design that reads "For fox sake" and has a very casual demeanor about him. Peter addresses him as sir and as he magically and casually starts a fire in the fireplace he tells Peter that they've saved half the Universe together and are past such titles. Peter addresses him as Stephen and Strange responds "That feels weird but I'll allow it." Could this be because the person that Peter is addressing is not actually Stephen Strange? Peter's request is straight from the four-issue "One More Day" arc from 2007 by Straczysnki and Quesada following the events of "Civil War." In the comic story, Peter asks Dr. Strange to save Aunt May's life after she is shot as a result of the world knowing he is Spider-Man. Several attempts to change the timeline fail and Peter is given a choice from the demon Mephisto to save May's life in exchange for his relationship with Mary Jane, to which the couple agrees, freeing the writers to do more with Peter's secret identity and open bachelorhood. Could we finally see Mephisto after our frequent speculation about him in WandaVision (3:09) and The Falcon & The Winter Soldier (2:57)? Please stand by.

We get a brief glimpse of Peter in the Black & Gold Suit, at a F.E.A.S.T. soup kitchen, which has been teased in multiple merchandise tie-ins for the film. While some describe it as technologically interfaced with circuitry, possibly to defend or attack Elektro, the Sideshow Collectible version features Mystic Webshooters, making it appear that it is to be used to either incorporate magic as an edge over traditional villains or perhaps even to combat magic, itself.

Wong is on his way out as he warns Strange not to cast the spell, and Stephen agrees he won't in the most UNCONVINCING MANNER POSSIBLE. It seriously plays out like bad theater, and we're just to accept that the Marvel Cinematic Universe is a big joke now. He's far too cavalier about the whole ordeal. To further illustrate that point, Strange winks to Peter after Wong exits. Seriously, what the hell is going on here?

So Peter and Strange go down to the basement. Take a good look at this room because we're going to talk about it later. Anyway, Strange starts the spell and Peter begins to have second thoughts about who should retain the knowledge of his identity. The spell explodes outward, essentially cast, and all Hell quickly breaks loose.

Now the images come quickly, and it's clear that Spidey will have his hands full. There is a flurry through the mirror dimension, a seeming arrival of Elektro, a confrontation between Strange and Spidey, a lecture from Strange that seems to take place immediately after the spell was cast, quickly lobbing blame onto Spider-Man in an apparent gaslighting incident to rattle the hero. Then there is this scene at the 2:21 mark: 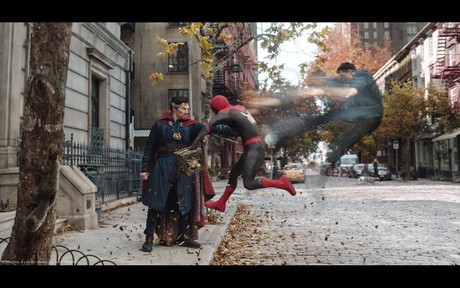 What is that box? Why does it have the same aesthetic as the Eye of Agamotto or the Sanctum Santorum's window? Why does Peter have it and why is Strange pulling such a Big Dick Energy Move to stop him? And take note of the apparel Peter is sporting in his true form.

Back to the action. Iron Spider, Happy Hogan in the middle of a SWAT standoff, something spooking Peter (this I know the least about as I can't get a good resolution look at it: I'd love to hear your theories). We see more Elektro action, culminating in what might be the emergence of The Sandman? The pumpkin bomb and the Goblin's laugh. Strange's warning "Be careful what you wish for, Parker" and the arrival of Doctor Octopus. Peter, in a suit (probably from a legal proceeding?) dons the Stark Spider Suit via nanotechnology for the ensuing fight, then the title card.

So, a couple more things to unpack here. No clear shots of Elektro, the Sandman, or the Goblin, but we do hear the laugh. But is it Norman Osborne, or perhaps Ned Leeds? Comics fans know that Ned Leeds is the Hobgoblin, and it is possible while everything is going to shit that Ned could foster a great resentment towards Peter. Perhaps he feels outnumbered as Peter clings to MJ and Ned suffers alone, or he is torn apart by fragmented memories of the life before the spell. I've a theory that Peter will try to remind those who knew his identity after the spell is cast and that will cause the rifts in the Multiverse, like asking someone to reminisce a memory that they don't possess can scramble their brain in the film REMINISCENCE. Rather than just tell them anew, he will ask them to recall something that was magically ripped from them. That could cause one to go mad, and could be the lever thrown to transform our beloved Ned into the Hobgoblin.

Also noticeably missing from this trailer are Tobey Maguire and Andrew Garfield. How will our alternate Spider-Men aid our current webslinger? Will Mysterio return? And perhaps most perplexing of all is how this installment will punctuate the Tom Holland SpiderMan trilogy.

At the title card I noticed a website: SpiderManNoWayHome.movie. This link takes you to the Sony Pictures SPIDER-MAN - NO WAY HOME site, which offers additional film stills in its gallery and I found these two particularly interesting: 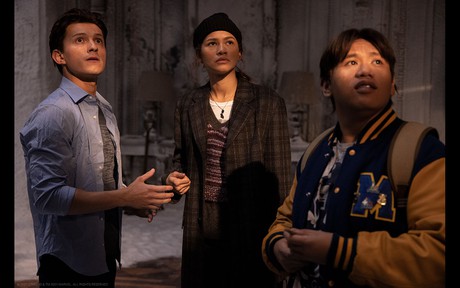 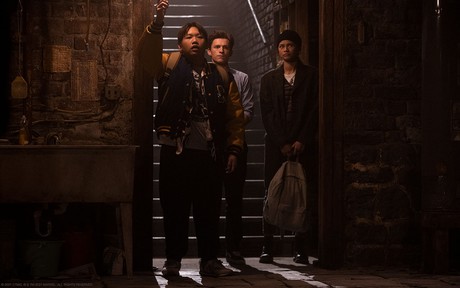 In the first photo they're clearly at the Sanctum Santorum again, most likely to divine what happened to Dr. Strange, and in the second they're clearly down in that basement from the earlier scene where the spell was cast. What is this sidequest, and is this the Peter that was shoved out of Spider-Man's body during his earlier encounter with Dr. Strange? Is it possible that we're dealing with a doppelganger Strange who performed the spell to create a doppelganger Peter, sent to steal an artifact from the real Dr. Strange, who goes on to fight the evil Spider-Man in the train scene while Peter investigates the phony Stephen?

There is so much going on in this trailer and yet it leaves us questioning so much more! The nagging question I have is when was this trailer meant to release? The speculation is that we only have it now because of a previous leak and its release is to dampen the damage of a substandard copy floating about, so when were we supposed to see it?

Regardless, all of our answers about the contents of the film will be answered when it releases on December 17, 2021.

What do you all think of the trailer, and what are your theories on what is going on within? Sound off below, and until next time, stay safe and stay sane.