SKIN DEEP: THE BATTLE OVER MORGELLONS Pits Patients Against Doctors 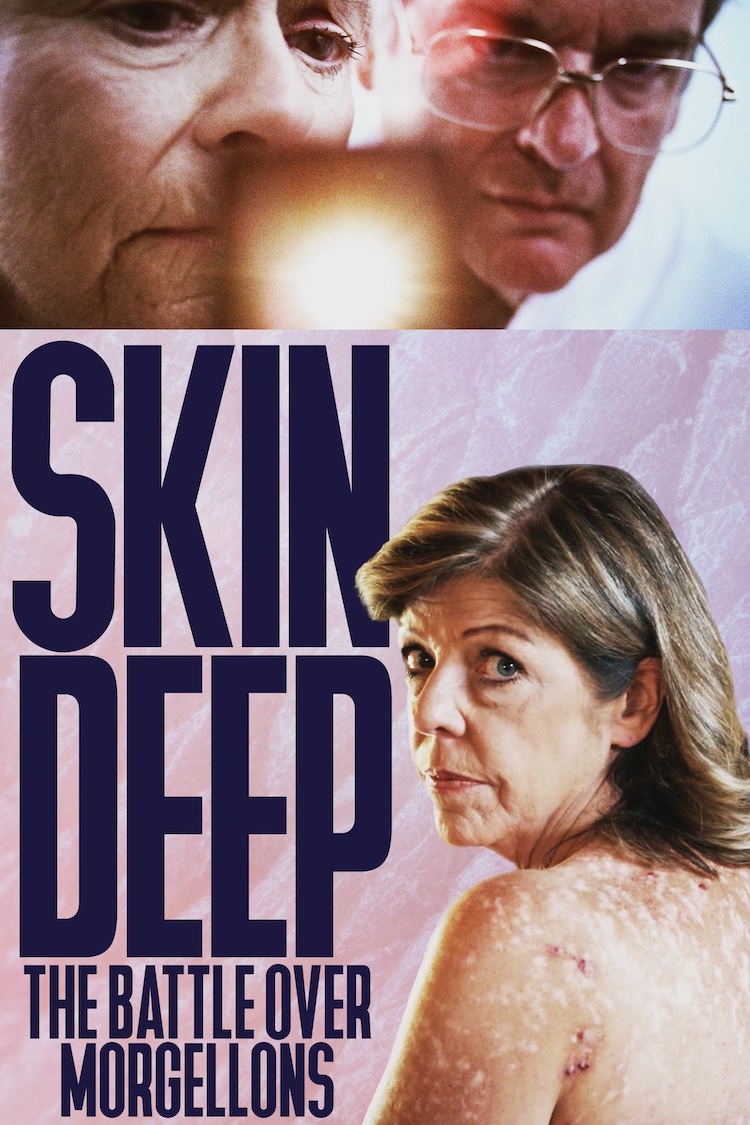 Hey homebodies!  Barbarella here wondering how you are holding up.  You are likely doing better than the thousands of people who experience a skin disorder that may or may not be all in their heads.  A fairly interesting documentary about it, called SKIN DEEP: THE BATTLE OVER MORGELLONS, is currently available on VOD/Digital and DVD.  Having never heard of Morgellons before, I wanted to get an idea of what it is and why there is a battle over it.  Even though it is a film about a skin disorder, that doesn’t put me off of it.  As a horror fan, I have seen some truly gruesome things on celluloid; a little rash isn’t going to scare me away.  Luckily for people not like me, the film isn’t one shot of a gross sore after another.  Sure, you will see the occasional lesion up close and personal, even under a microscope, but much of the documentary is just people talking.  If you’re squeamish, just look away when the sores pop up on screen – it doesn’t happen too often.

SKIN DEEP isn’t so much about the disease itself, but about the battle between those who suffer from it and the medical professionals who deny its existence.  People with symptoms of it started calling it Morgellons, but the medical community doesn’t recognize it as a disease at all.  Instead, it’s considered a mental condition of delusional parasitosis.  This means doctors think patients suffer from a psychological disorder where the patients believe that there’s something crawling under their skin, and the sores are a result of their frequent scratching.

While the documentary includes a variety of individuals suffering from Morgellons, it focuses its energy on four main people: Cindy Casey-Holman, Edward Hu, Steven R. Feldman and Ginger Savely.   The former two have the condition, while the latter two are medical professionals, one a dermatologist and the other a nurse practitioner.  It also includes some interesting insight and additional information from multiple experts, including a medical historian, Harry Quinn Schone.  I didn’t know there was such a thing as a medical historian, but he offers some very insightful information, and I appreciate his participation in this documentary.

Nurse Practitioner Ginger Savely seems more willing to work with her patients than the majority of dermatologists included in this film.  Steven R. Feldman proves an interesting character, but I feel like he’s a form of cheesy Vegas lounge act meets dermatologist. At times I appreciate his perspective, but at times he comes across a bit too much like a megalomaniac.

Cindy, a registered nurse, spends ample time discussing her symptoms and her struggle to get some kind of treatment.  Her story proves the crux of the film, and provides a good set up and base as the film transitions through other stories.  However, a sizable portion of her account involves her relationships, and while I appreciate some of it, Pi Ware (SOLITUDE, THE ACT) spends a bit too much time on it when I’d rather the focus remain tied to the topic of Morgellons.

Although I could have done without so much information on Cindy’s relationships, I would have liked to have seen Edward and Brian Hu’s relationship explored further.  Edward Hu begins developing symptoms and seeks help from his brother, Brian, a doctor who tells him his illness is psychological.  While Edward shares how this impacts their relationship, it doesn’t go deep enough for me.  I want to know more, and I want more time with Brian to hear his reaction to some of the information Edward divulges.  It seems we only hear a very hollow account of what transpires.  I believe this could have been where the film achieves more emotional depth rather than the story Pi Ware uses to attempt to achieve a similar effect.

Some individuals make comments that incite anger in me, yet I often find myself wanting to hear more from them to try to better understand why they would respond in certain ways.  Again, I feel like the film fails to dig deep enough to really address what’s going on under the surface.

Despite a few missed opportunities, Pi Ware presents many intriguing concepts regarding doctor-patient relationships and the differences between a patient having a disease not fully understood and a patient who has nothing biologically wrong.  It examines how different medical professionals address unrecognized medical conditions, and the impact their responses have to those who cannot get relief from their symptoms.   All in all, it’s rather interesting.  Despite that I wanted it to delve deeper, I still learned a few new things.