Hey Folks!  Barbarella here.  Every once in a while, a movie comes out that has the potential to really get you thinking.  HIGH GROUND fits the bill as something that could resonate if you allow it to, but for some people that may be a hard ask.  The story about an aboriginal who teams up with former soldier Travis to track down an outlaw has plenty of violence to deter more squeamish viewers.  It also challenges us to look at the wrongs done in the name of colonization, and it begs the question who are actually the civilized ones?  The Mentalist’s Simon Baker, who plays Travis, took time out of his morning to chat with me about the film. 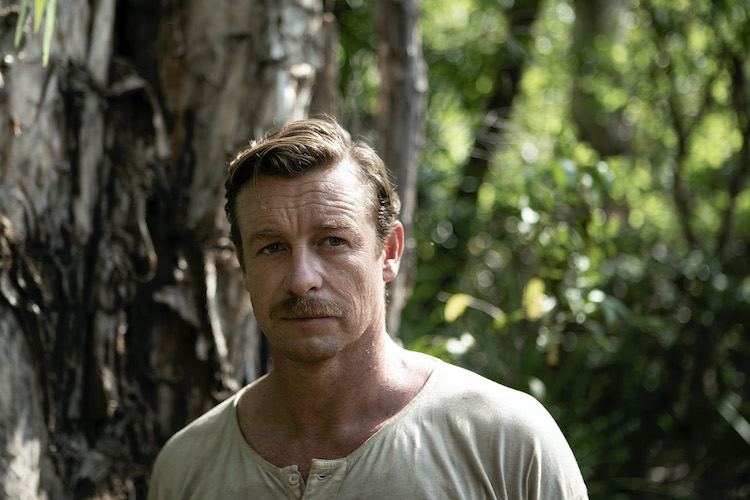 HIGH GROUND, that's a different kind of story from what we typically see out of Australia. How did you discover this project, and what inspired you to get involved with it?

“I had a chance meeting with the director at an Indigenous festival in North-east Arnhem Land called Garma Festival, which is a fantastic festival up there. I've never been to an Indigenous festival before. I had worked with this director thirty-odd years ago. He was a cinematographer on some music videos I did in the very beginning of my career, and we had a great rapport then.  I hadn't seen him for thirty-something years, and I just ran into him at this festival, and he said, "Look, I'm trying to get this film going.”  He'd been trying to get it going for around fifteen or sixteen years or something.

“I was kind of enthusiastic about really understanding more about this incredibly rich culture that existed in my country that I had learnt nothing about at school, [that] I had very little knowledge or understanding about.  I was excited to learn more and to engage in it. This film was...well, you saw the film. It takes place during the Frontier Wars, and I jumped at the chance because I knew that opportunities like this don't come up very often in your life.  I feel very privileged that I was able to experience working on this movie.” 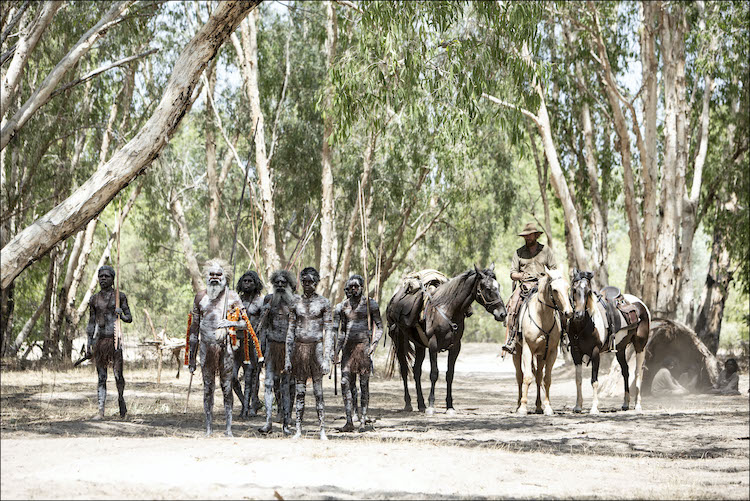 What did you learn about the Aboriginal culture through your involvement that you didn't know prior to doing the film?

“That's such a hard question to answer because what I knew was only what I'd learnt through a couple of Aboriginal friends I had at school that were in more metropolitan areas. What I didn't realize is that this culture that has existed for at least 60,000 years, which is a number that's hard to really get your head around, is still alive in Australia and had largely been ignored, obviously, during that period of colonization and through the Frontier Wars that went into the 1930’s; we were trying to sort of eradicate [it].

“What I learned when I was up there? It's incredibly hard to articulate that because I'm so limited to express myself through my white-fellow language. What I learned was far beyond that. It existed more through feeling, heart, and connection with a place through Mother Earth and Father Sky, through nature, and just through care.

“The culture in that area is incredibly rich and deep and powerful and has been passed on. The history is an oral history.  It's a history that's told through stories to select people that are entrusted with these stories to pass them on.  It's passed on through ceremony, song, art.  The arrogance of European settlement in a lot of countries has denied us so much knowledge that we could have shared, that we could have actually listened to in regards to sustainable practices and how we treat the world and cohabitate with a harmonious balance, as Indigenous Australians showed throughout those 60,000 years.” 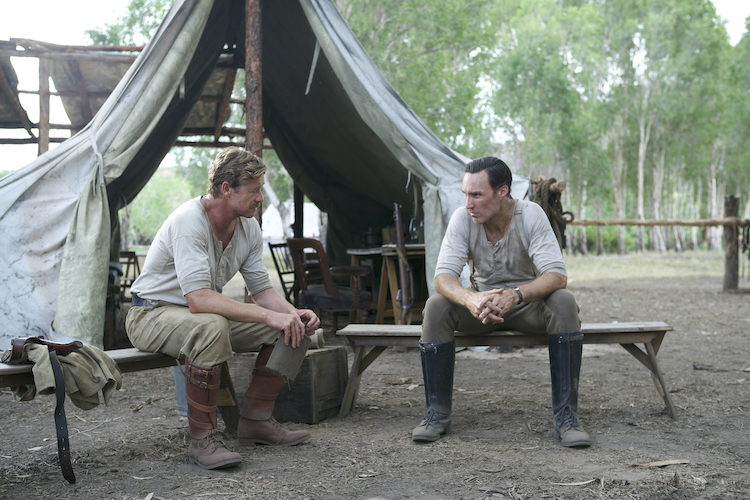 Whether it's hero, villain, do-gooder, or ne'er-do-well, people love to assign labels to characters. If you had to give Travis a label, what would it be and why?

“I think there's probably no country that likes to label more than America. They always tend to label on extremes; the world exists more now in such extremes.  I think he's a well-intended human being that's grappling with his path and his involvement. I would not say, at all, that he's heroic.  I think that he's morally ambiguous, but I think that he does possess empathy.  I think he's someone that sits scrap in the middle, trying to understand it all, which is where a lot of people, I think, probably do sit, understanding that things do have to shift and change but struggling with the idea of having to give up and accept and acknowledge their part in the negative aspects of history.”

Believe it or not, I've actually been to Australia's Northern Territory. It was very sultry when I was there. I'm wondering, what time of year was this filmed, and what were the conditions like?

“The conditions were incredibly difficult. We had some issues and got delayed at times, and we were pushed further and further up against the wet season.  In the wet season, basically where that compound, that little sort of settlement mission area [is], that's under ten feet of water with salt water crocs and bull sharks swimming through that area.  We had a croc wrangler on set at all times because we did have some issues with crocodiles. It was 45 degrees Celsius [113 Fahrenheit] most days, some days hotter. It was very, very, very physically demanding and difficult, but I think that really helps translate on screen, in a way, [how] this incredibly beautiful country, stunning visually, [could be] incredibly difficult and harsh if you don't know how to move amongst it, if you don't have the wisdom and the knowledge to live amongst it in the right way.”

You play a sniper in this, did you learn to shoot well for the role, and how are your sniper skills? 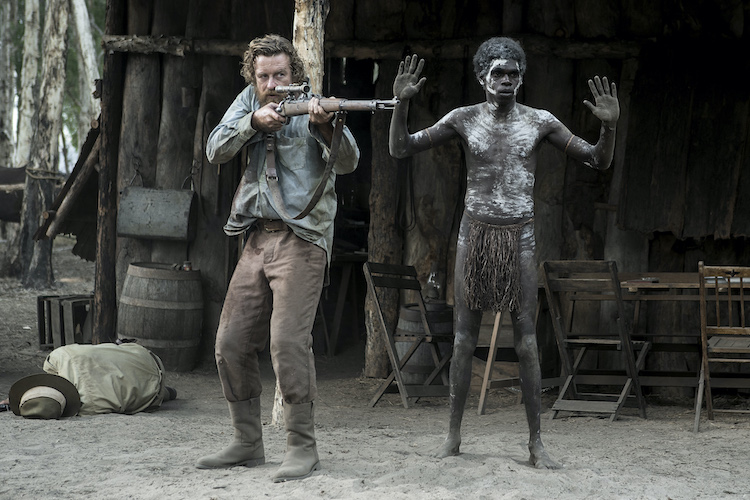 “Yeah. Well, Simon, the person, I am not very fond of guns. I find them sort of inhumane. I did have to learn to shoot with that gun, and it's a German Mauser, which is a First World War German sniper rifle. And it's an original one, so that gun had a lot of history to it. I did a fair bit of practice with it. I had to become very familiar with the gun, and I did try to keep it with me for a while to get familiar, but I slept one night with the thing in my room, and I couldn’t sleep that night because I think it holds a lot of negative energy because of its history.  I promptly gave it back to the armorer and said, “Look, I want to be familiar with it, but I don't like it. Not for me.””

One of the cool things about the film industry is that it throws people together of all different backgrounds and experience levels. Would you talk a little bit about working with newcomer Jacob Junior on this?

“Yes.  I love acting with actors who have never done it before, because I think that everyone inherently, instinctively has the ability to act within them. Some people overthink it; some people, it just is able to flow out of them. I made a film a few years ago, that I directed too, called BREATH with two non-actors in it, and I loved that experience.  Jacob Junior was a ranger on that land that we shot most of this film, so he knows the land very well. He's connected through multiple generations to that country, to that particular area. He knows it backwards.  It's in his heart.  It’s in his soul.  It’s in his blood. And his culture is an oral-history culture. 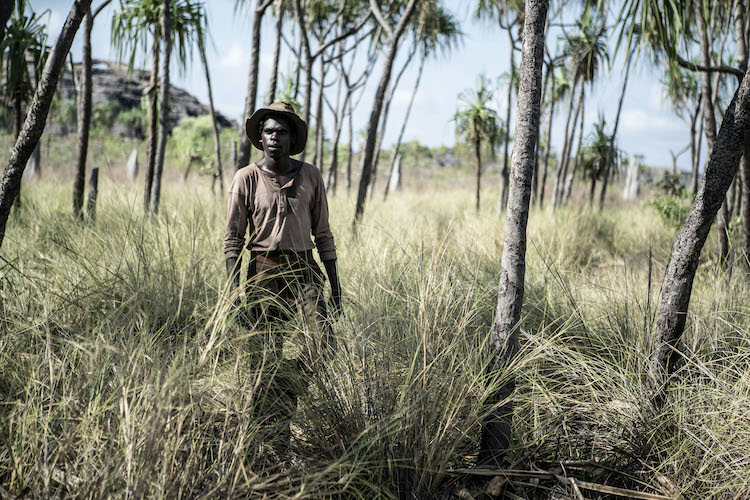 "He's been through ceremony many times. He's very, very lored up, so he knows his culture, and the story exists in him. So for me, as an actor who has learned the craft over years of working and as someone who loves stories, to stand opposite him the first time he's ever been on a film set and see how much just comes out of him without him even making an effort was really, really amazing.

“There's no trick.  It's just in him, and he was born to tell this story in this film. When you talk to Jacob, English is not his first language. He talks about what made him do this movie was the land, the country, his Mother Earth and Father Sky, which is mentioned [by] Witiyana Marika in the big meeting scene in the middle of the film. [Jacob Junior] said it's his country that told him to do this movie, and that's beautiful. That's powerful to me.” 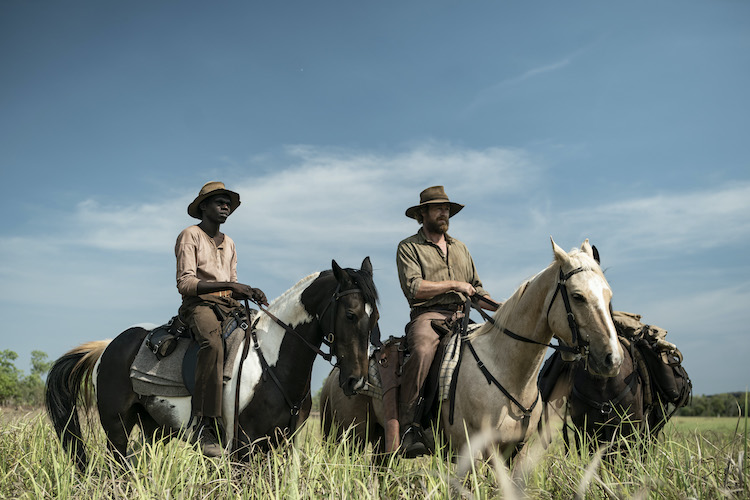 Did you learn anything about yourself working on this film?

“Yeah. It constantly shone a light on my own ignorance, my own sort of selfish, kind of egocentric way I've gone about my life in different times. Just it made me feel insignificant, which was uncomfortable but uncomfortable in a really good way, I think.  There’s something in that uncomfortableness that is cathartic for us to sit in, to just accept and feel uncomfortable, as opposed to using our privilege to avoid feeling uncomfortable in any way.

“I've talked to different audiences. I've sat with Indigenous community audiences that are emboldened and empowered by this film. And then, I sat and talked to white, Australian audiences, that had been very much confronted by this film and opened up by the film. A lot of white Australians have said to me, “I think it's a film that every Australian should see.” I think it has legs further out beyond that, because I think this is a story that resonates with so many countries around the world that were colonized.”

While I would’ve loved to have spent more time speaking with Simon, I couldn’t.  But I, as well as you, could spend some time with him as Travis in HIGH GROUND because it is out now on Digital and On Demand.