Hey, friends. Barbarella here. If you’re a fan of martial arts, you’re likely familiar with Scott Adkins who’s not only worked alongside some of the biggest names in action cinema, but he’s also repeatedly demonstrated why he’s among the best in the business. His latest undertaking, ACCIDENT MAN: HITMAN’S HOLIDAY, which will be in theaters and on VOD and digital October 14, finds character Mike Fallon in Malta sometime after the events that transpired in the original film. This sequel proves more fun than its predecessor, largely due to the hilariously disgruntled Siu-Ling, played flawlessly by Sarah Chang. Naturally, Scott leads the cast, showcasing not just his kicking skills, but also his sense of humor and willingness to be self-deprecating. Visually more stylized than the original, this one is a fun flick with some great action, so for those looking for something not overly serious, it’s an entertaining romp.

I spoke with the talented and humorous Scott via zoom, and part of me wanted to chunk any semblance of professionalism out the window and hit him up for a martial arts lesson, but sanity and a desire to continue to have opportunities to speak with incredibly talented actors and filmmakers prevailed, and I refrained. At any rate, check it out! 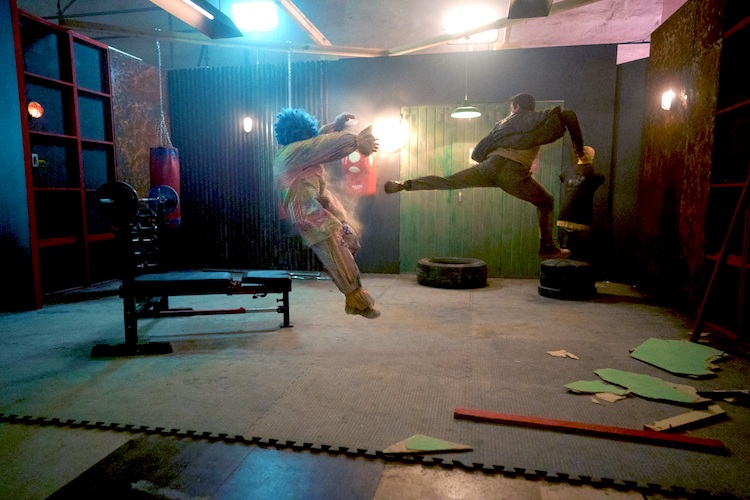 What do you have against DJs in that opening scene?

“Well, they need to be killed, don't they? You know what? It's very similar to the opening of the first film. I won't go into details, but we changed the script last minute, we had to.”

You have worked with pretty much every big name in the martial arts' scene. Who stands out the most, and what was it about working with that person that made them just stand out in your mind?

“I know these people, Barbara. I have to speak to them again. How can I single out one and upset all the others? Yeah. There's so many inspiring martial-arts actors and filmmakers. It's the ones that you grow up idolizing as a kid that, of course, have the biggest impacts on you when you work with them. It's no secret that I was a huge Van Damme fan, so to work with Van Damme was like, "Wow, this is crazy!" And Jackie Chan and Donnie Yen, Arnold Schwarzenegger, Sylvester Stallone, Dolph Lundgren, meeting Sammo Hung. When you get to work with those guys that you grew up watching as a kid, those are the ones that have the biggest impact on you.” 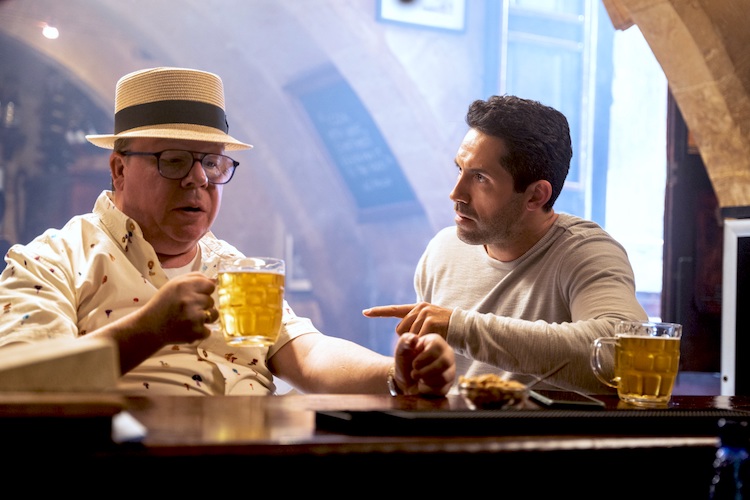 What inspired you to do this sequel?

“Well, I fell in love with the comic book when I was fourteen, and I thought somebody's going to make this into film; I can't wait to watch it. Nobody ever did. Then I'm making waves in the business, I think to myself, I'm going to make the movie, so I managed to get the rights, and we wrote the script with Stu Small, friend from school, one of my best mates. We got it to Sony; they made it. It’s a great character. Obviously, what he does for a living means that we can have many, sort of, tales of the Accident Man. I'd love to do more. It's perfect for a franchise, so keep them coming. Let's hope that the audience likes this one, and we could do another.”

It's fun. I love that Mike Fallon has his own kind of personal Cato in Siu-ling, and I love Sarah Chang in the role. Did you suggest her to the casting director, or how did she become involved in the project?

“None of the assassins will be cast through the casting director, and the reason for that is I've got my finger on the pulse of who's relevant in the martial-arts film industry, because I want to work with people that can help me with the five sequences, not hinder me, if you see what I mean. I know who's going to be able to do it, but that was the most difficult part to cast because she's specifically from a certain area of the world. She's female, she's a highly trained martial artist, and she also needs to be able to act. As you can imagine, there's not a lot of people to choose from, and it was a very difficult part to cast. It was great that we found Sarah, recommended to me by Mike Leeder, who is a casting director that's got a finger on the pulse of the martial arts. I owe him a lot because she's great in the movie. I mean, she runs away with the movie. The character was different, actually, and we changed the character last minute to make it this sort of grumpy, miserable, hard-ass sort of character. Of course, it's obvious I've taken the inspiration for the character from the Peter Sellers’ Pink Panther movies. But I thought it was time to resurrect that because it's so cinematic just to have somebody that you're actually friendly with trying to kick the shit of you when you'd least expect it. Funny.” 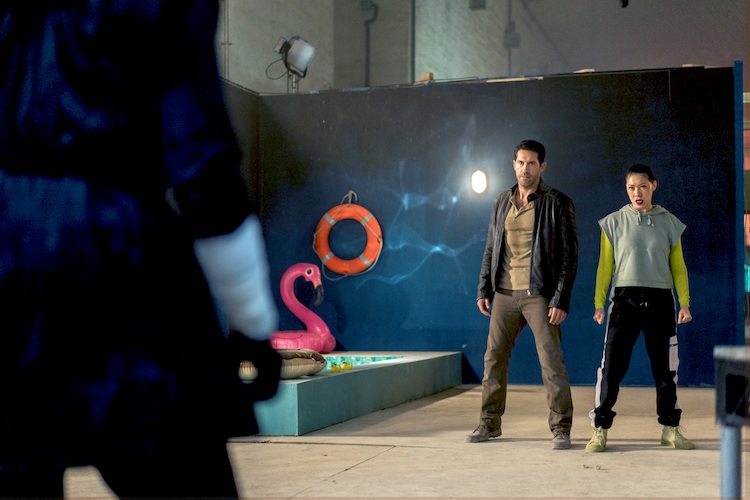 That's great. What is your process for choreographing a fight? Does it vary depending on who's in it, or do you kind of stick to a certain sort of standard?

“If you know who you're choreographing for, then you can look at their previous work and know what they're good at and what sort of kicks they do and what sort of moves, but the most important thing is to not lose sight of the story. You need to know the tone of the movie. If it was a serious film, which Accident Man clearly isn't, that sort of action wouldn't work, but because it's an outlandish, over-the-top, comic book-y type of movie, we can go Hong Kong action with it, and it's going to work. Now we know the tone, that's the first thing, and then you need to not lose sight of the story and the character and who the character is. The character should fight as the character should be. And obviously, good actors/screen-fighters will bring that to the table. But essentially, a punch is a punch, and a kick is a kick, and it's all about creating shapes and filling the frame with beautiful action.” 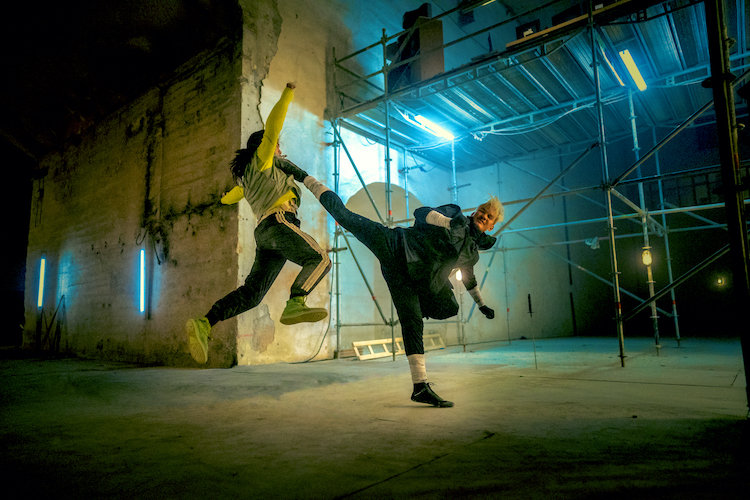 This movie was directed by a duo, George and Harry Kirby. What was it like for you, working with that pair?

“They were the perfect guys for the job. I needed to get a new director because Jesse was off doing something else. The Kirbys had sent me the short film that they'd done, and it was absolutely brilliant; it blew me away. It was visually so well shot and directed. I mean, they're great visual directors. On top of that, they've got a big history in stunts. George Kirby is a working stuntman. I met him on Doctor Strange; he was doubling Benedict Cumberbatch. They ticked all the boxes; they were English and understood the English sense of humor. They were very much wanting to bring more comedy to it because they've got that sensibility. They completely understood the action, and they've got a background in visual effects. What else do you need?”

That's all you need, right? If your television were destroyed in a fight, what shows would you miss the most?

“I tell you what, there's been a few TVs ruined in a few of my movies. But, what shows would I miss the most? Well, obviously The Bake Off. I'll be missing that one. I'm loving The Old Man at the moment. But, God, I don't even watch [much] TV anymore now I've got kids. It’s Peppa Pig and Paw Patrol, and then the 11-year old girl's putting YouTube on, and it's a nightmare.”

So maybe a TV being destroyed wouldn't be the worst thing in your household.

“It wouldn't be the first time either. My daughter has destroyed two TVs within a space of one month. Can you believe that?”

No! How does that happen?

“Yeah, she threw the handset at the TV, at least one time.” 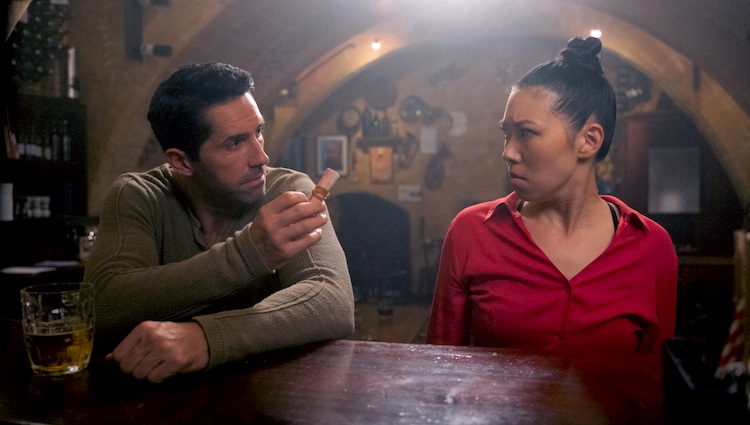 Your character vacations in Malta. Do you get any holidays, and if so, where do you like to spend your time?

“I'd never been to Malta before, and I was happy to go and film Accident Man there because it looked great in the film, and the Malta Film Commission really looked after us. I would love to go back and film something else. I'd like to go back for a proper holiday because, obviously, it was so busy, I didn't even get to do any sightseeing, really. But where do I like to go on holiday? Thailand is just paradise now. I love Thailand.”

“Certainly, my chat-up lines are not that smooth and graceful. I appreciate you saying I'm smooth and graceful as a martial artist. In real life, well it would never go that way, would it? Real fighting is messy and chaotic, and it's very hard to equal that in a movie, so you make it stylistic.”

If you had to teach martial arts to a 50-year old who'd never done martial arts before, what would you start on?

Martial arts may be all about the footwork, but martial-arts films are about so much more. For those looking to escape the season's horror films for something different, you could see Scott Adkins kicking his way through his latest action-comedy, ACCIDENT MAN: HITMAN’S HOLIDAY, in theaters and on VOD and Digital October 14, 2022. Check out the trailer.