Hey, friends. Barbarella here. Written by Damien Ober and directed by Scooter Corkle, THE FRIENDSHIP GAME examines the notion of how acquiring your deepest, innermost desire impacts your friendships and the people around you. It’s an interesting idea to consider, and when viewed through a horror lens, it goes a bit dark.  Starring Peyton List, Brendan Meyer, Kelcey Mawema, Kaitlyn Santa Juana, and Dylan Schombing, it will be in theaters, on digital, and On Demand November 11, 2022. I had an opportunity to speak with Scooter about the project. Check it out! 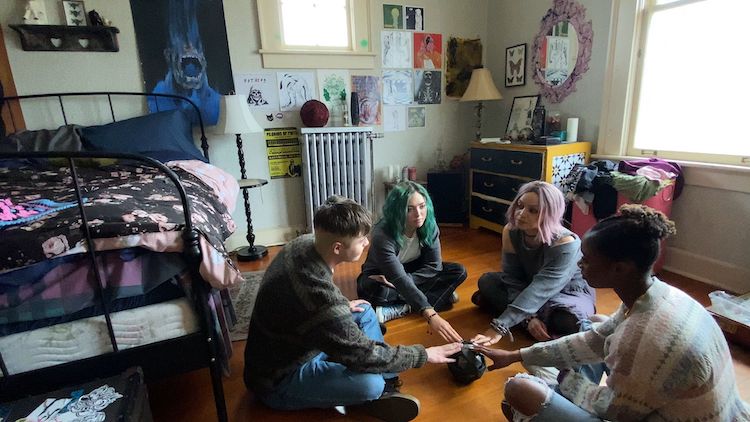 If your deepest, innermost desire came to fruition, what kind of impact would that have on your friendships?

“Oh. That is a dark question, Barbara. I honestly don't know. I'd probably just have a lot more of them. That might be part of it. I think my deepest desire is to have more free time. I don't know if that's my deepest desire. The darkest, deepest desire, I'm not going to repeat on camera.”

I was wracking my brain trying to think of what mine would be. If mine came true, I don't think it would have a negative impact on anybody.

“Yeah. Well, you never know. That's the trouble with the deepest desire; because it's so selfish, you never really know how it's going to affect others.”

That is true. How did you get involved in this project, and what was it about the story that appealed to you?

“I think, originally, I had done my first feature, and I was looking for my next one. I reached out to Dan Bekerman, our producer. He was a friend of mine from Toronto, and I was looking for something kind of weird. My first one was a thriller. It was a small-town noir thriller, which was really fun, but I did want to get a little weird. I asked him if he had anything out there, and The Friendship Game landed, and I read it. It was weird. It was mind-bending, and it was a cosmic horror, and the coolest part about it, I think, was that it was character-focused. It was a cerebral read.

“Potentially, the first thing that really got to me was this idea of your friendships. If your friendships don't survive the game, neither do you. It did make me think, “What if my friends left me behind?” As an adult, it's not really a question that you ask yourself very much. But as a high schooler, the fact that all of these kids are separating and going to different universities and colleges and that sort of thing, I mean, the stakes are life and death to them, or it feels life and death to them, then the game itself actually just pushes it over the edge and makes it life or death. To me, that felt like a pretty cool in for a horror movie, a pretty good approach to start one.”

Yeah. You had some kind of Lost Highway morphing moments of the characters, and you also had them video glitching, for lack of a better description. Would you talk about those choices and that significance?

“Yeah. Because it's a cosmic horror, because it is a cerebral genre, I think the thing that makes that pantheon cool is that it is an exploration into madness, the intangible madness of self. Everything that comes about from this question of what is your deepest desire and how does it affect the people around you, that is a very personal place to begin. So when we get into all the wild sci-fi stuff, you are not really sure where you are. You're not necessarily in a new reality, or maybe you are. It could be an “altiverse,” as I've been calling it, an alternate universe. The choice to get there, I think, is to put you inside the character's head, whether you're physically inside their head or another space, and [ask] that question and give that space to then see a yes or no and see the repercussions based on a yes or no, to disastrous effect for some, not for all, but for some.”

Was the writer on set at all or once he handed over the script, he just was out of the picture? How involved was he and how collaborative was your working with him?

“Damien Ober is awesome. We have a really good relationship now. We've been working together for three years, bringing this story out a little bit further and further and further. He was on set a little bit. He had to fly all the way up here – we shot it in Canada. He did fly up here for a little while, and he was just so thankful to be a part of the journey. He is a lovely, adorable, six-foot-four man. And yeah, he was very collaborative. I would say Damien has been very active in the story, for sure. As a writer, myself, I know it must be a little tough to give it to somebody, but there's a trust that we were able to garner and bloom, I guess, to continue that thread.”

There's some interesting set design. What was your favorite set and why?

“Well, I think the party set is awesome. That was a space that's like an abandoned sanatorium, which is so creepy already. All these kids go to have a house party, basically, like a trash house party or a bush party or that kind of thing, but in this space. We found that space, and because it was abandoned, they let us spray paint it and dress it any way we wanted, so the local spray-paint community, the taggers and all those folk, came out, and we just gave them carte blanche to make whatever they wanted. So they just went around and created all their own art, and they gave us the rights to use that art. It is theirs. It was basically like an on-the-lot studio vibe that we made completely original. So that's really exciting. We brought the community in, too, so that was cool. They love a movie. It's always fun to have a movie in a community, and to be able to bring them in to be a part of that journey. I have good memories there.” 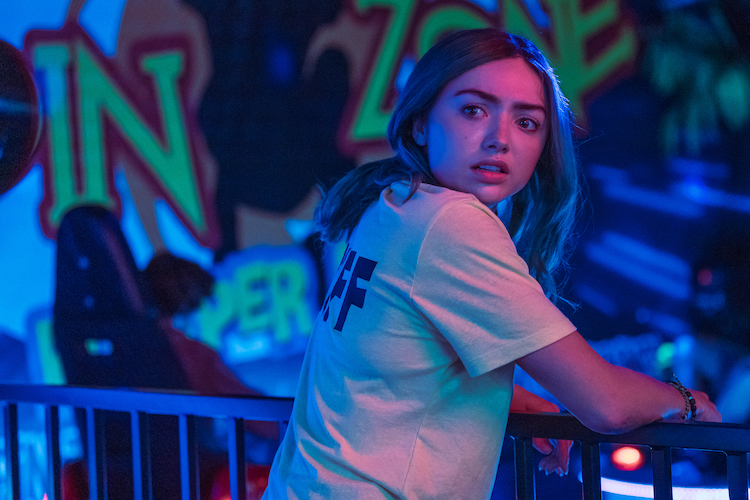 I like the one room, during the day, that's all graffitied out. It was just so bright and colorful and beautiful. I really appreciate that a lot.

“Yeah. We play a lot with color. Color becomes sort of its own character. It starts as something, and then morphs into something else. It starts as this place where it's based in fear, and then it becomes more of an emotional connection to color. We tried to pop that color quite a bit and make it a character, for sure.”

What was the most interesting thing that happened behind the scenes while you're making the movie?

“Oh, man. I mean, there's a thousand stories. There was one, our transport captain stayed at that sanatorium, which is a hundred acres of abandoned space. She stayed in her camper overnight, and she said that she had heard somebody walking around. Her light kept turning on outside, and she went outside, and nobody was there. And then she came back inside very scared and locked everything and had a restless night. The security guard, who was watching, asked why she was walking around the camper all night. And she's like, "I only went out once." So a nice, freaky ghost story just to add to the filming.” 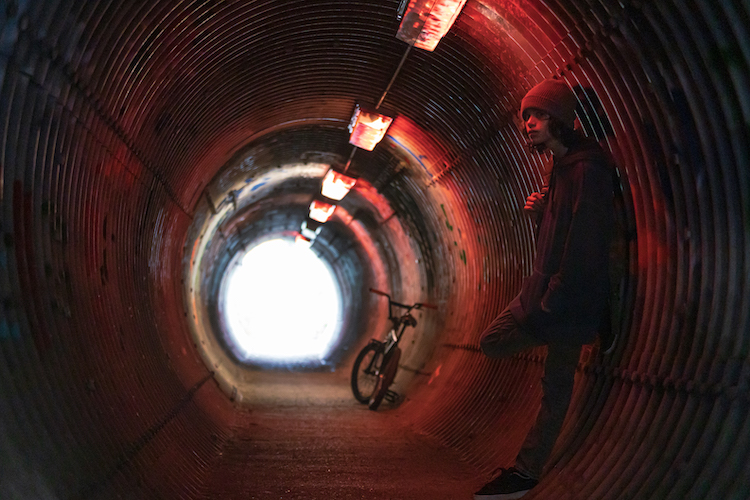 That's interesting. So regarding the cast, who was the most problematic? No. I'm just kidding.

(Laughs) Of course you were. Would you talk a little bit about the casting and why you chose the people that you did?

“Yeah. The casting process in any film is pretty messy because you ask people to be vulnerable, and then you judge them. It's a weird thing to do, but it is also the most important, to me anyway. It is the most important piece of any film because character is the focus, or should be the focus, of any movie. Peyton came in and read for the film, originally, years ago, and then we had a casting mix-up and some schedules didn't line up with a different lead. Then she came in and was a total pro, and I'm so happy with her performance, and I think she really is. It is the realest she's ever been; it’s something that she's said. I think she's great. And then our other cast, like Brendan, he's in Color Out of Space and The OA, and I've been a big fan of his for a while, and we were lucky enough to scoop him.

"And then Kelcey and Kaitlyn were finds locally in Vancouver and are both just amazing. Kelcey's all instinct, and she just has this fresh, really believable newness to her that I just want to keep working with her. And Kaitlyn was a stage performer, and we were her first major motion picture, and she's featured. She's one of the leads. I just think she's excellent. I'm really excited to see where her career goes. So that's our lead four, anyways. I don't know. Our cast rules. I've said it before, and I'll say it again. Our cast is really good. I'm excited for them.” 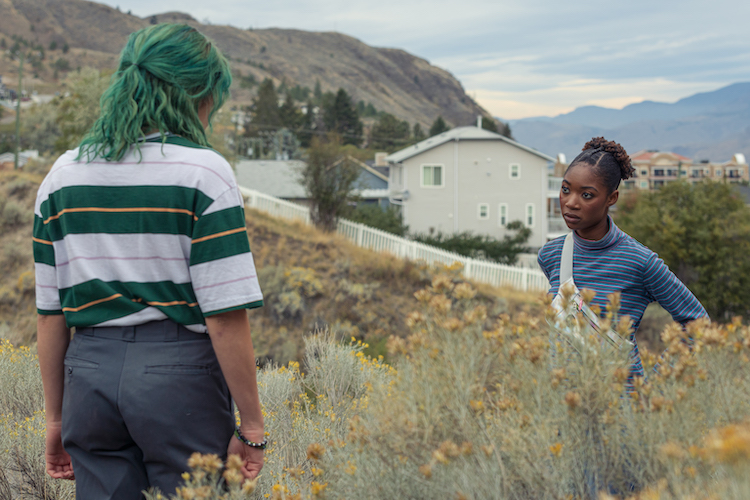 To which character do you relate the most and why?

“To which character do I relate to the most and why? Wow. That's a tough question.”

I like to throw those zingers in at the end.

“Yeah. Exactly. I mean, it's hard not to relate to Zooza. She's got abandonment issues, which I think I do too. I also had my father leave when I was a kid, so that idea of abandonment and pushing people away because you have that fear. You don't want to be hurt, so you try to get them out of your life. I think everybody can relate to that in some way, shape, or form. But yeah. Maybe that. I don't know. That's a really tough question. Maybe the old lady. I don't know. Maybe I just want to give something to somebody so they can test their friendship. I don't know.”

My advice to our readers: Maybe don't take games from strangers that test your friendship in a real life-or-death way. You don't really need to know. If they are true friends, they'll be there for you. If they aren't, just live the lie. You'll be happier...and nobody has to die.

Here's the trailer for THE FRIENDSHIP GAME, which will be in theaters, on digital, and On Demand November 11, 2022