Freddy Beans here with an interview of Sam Elliott, for his new movie THE MAN WHO KILLED HITLER THEN THE BIGFOOT.  In theaters, on demand and digital HD today. 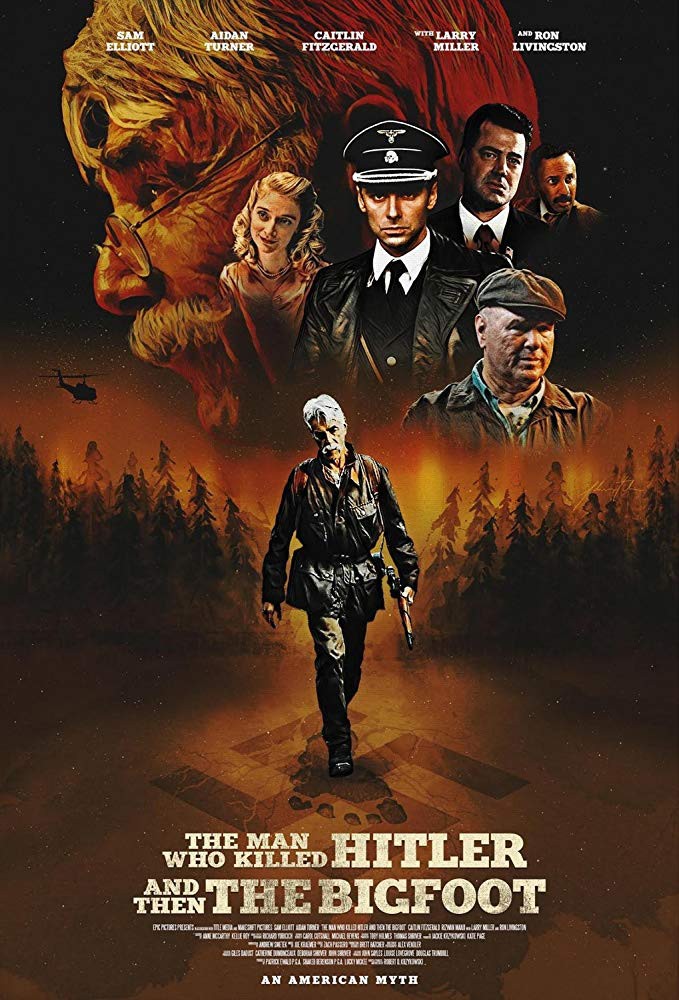 If you liked his Oscar nominated turn in A STAR IS BORN, you’ll love his work in this oddly quaint film, which deserved a better title.   If you’re a Sam Elliott fan, don’t miss it.  He acts his ass off in it, in a starring role.  Living with regret on his earlier life choices and killing Hitler until the government needs him again for another assignment.  This one much harrier.  And now the interview. 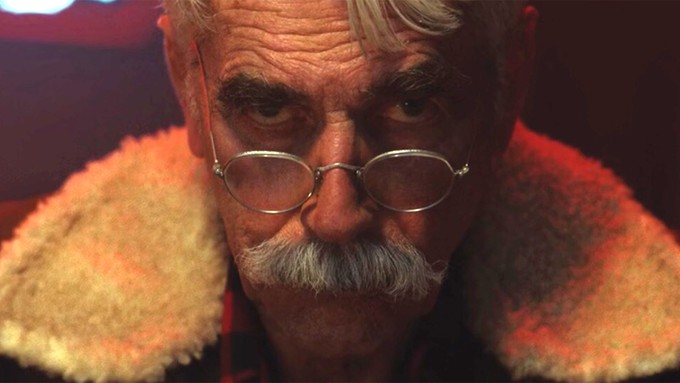 Freddy Beans:  How are you doing today Sam?

FB:  It’s an honor to talk to you man.  You’re somewhat of a legend, your voice sure is!  Can you give a brief synopsis of your new film THE MAN WHO KILLED HITLER and THEN THE BIGFOOT?

SE:  Well, to begin with he’s a military man.  Everything flows from there.  He’s a guy that has killed a lot of people during the war, one of those being Hitler.  He’s unsettled with that fact.  He’s a guy that suffers from a certain amount of “shell shock,” they would have called it, back in the day.  Today they would call it P.T.S.D.  He’s a man who’s lost a lot of his life due to his time in the military.  His girl died while he was there.  He’s a gentle soul on some levels, at this point in his life.

FB:  Great synopsis, it’s not an easy movie to summarize.  What was your favorite part of doing the film?

SE:  When you do something with so many great moments in it, it’s hard to single out one.  You know what I mean?

FB:  Fair enough.  Personally speaking, I’m a bit of a horror movie buff and one of your first leading roles was in FROGS (1972), I was wondering about the experience of making that film? 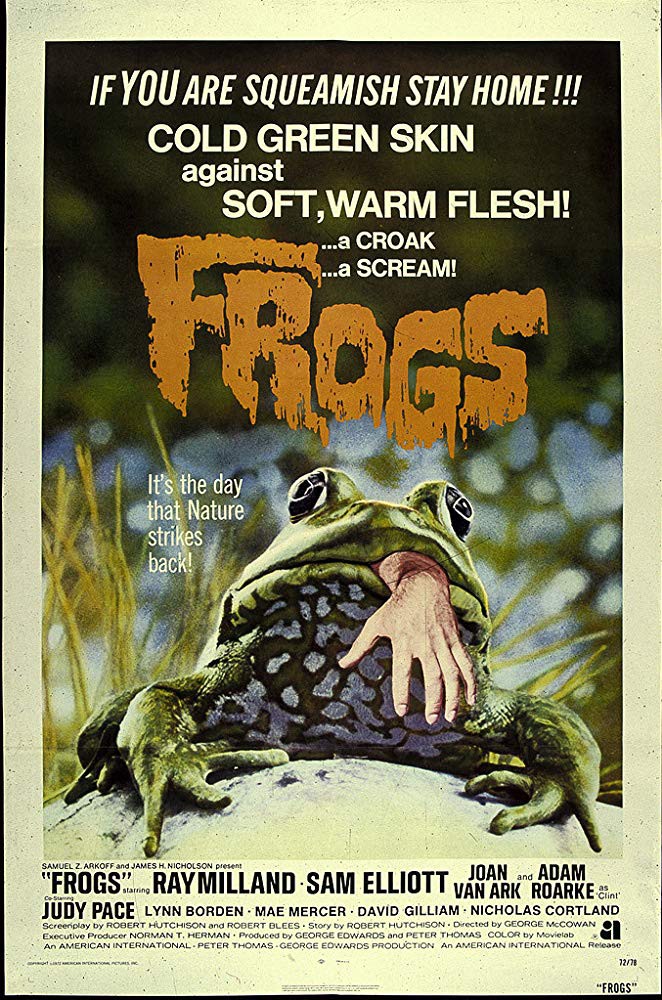 FB:  I know man.   I’m sorry. (Laughs)
SE:  No, it’s all right.  I have fond recollections of FROGS.  FROGS is the reason I got the job in LIFEGUARD.  I remember when I was in that rowboat and they were dropping snakes down on me.  There are these cottonmouth water moccasins in the water.  This guy brought all those amphibians and reptiles on set.  He was really comfortable handling those cottonmouths.  It’s a very venomous snake.  Not the kind of snake you want to get bit by.  I sound like I’m afraid of snakes.  It was weird to me that there were in fact cottonmouths around.  I thought maybe they’d have something that looked like them.  There were some nonvenomous snakes to be sure but this guy was pretty strange. 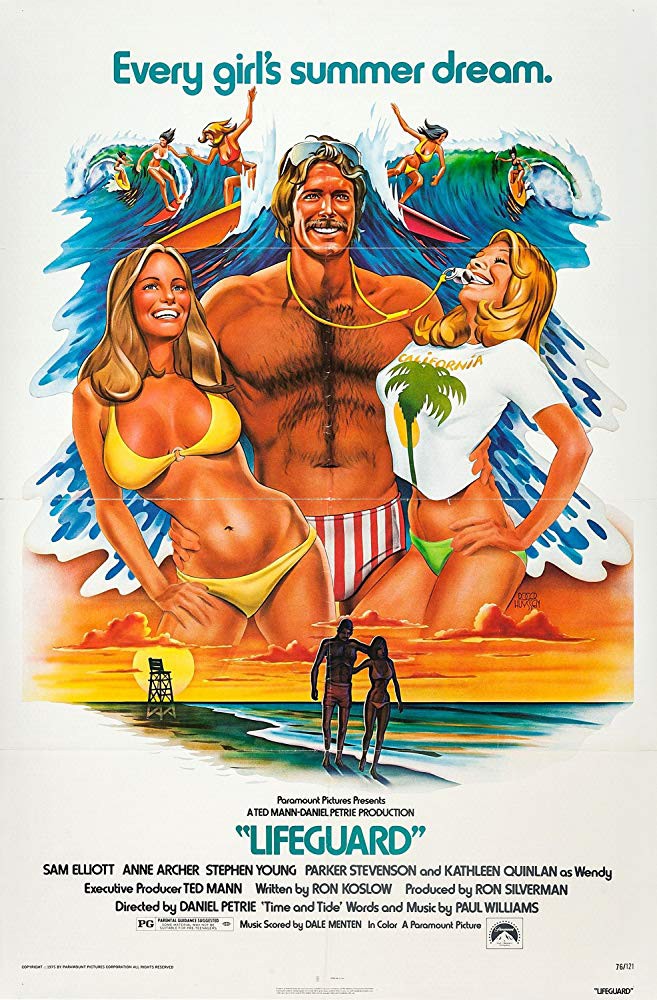 SE:  I think the thing that stuck out for me more than anything else, was the fact I was working with Ray Milland.  He was well at the end of his career.  He had an amazing career.  He was very kind to me.  He treated me really well, with a lot of respect.  I’ll never forget him for that.

FB:  I’ll never forget DIAL M FOR MURDER and THE UNINVITED!  Thank you for sharing all of that.  Another movie that holds a soft place in my heart is MASK, with you as Gar in it.  I was wondering if you had any idea making it, how beloved that movie would become? 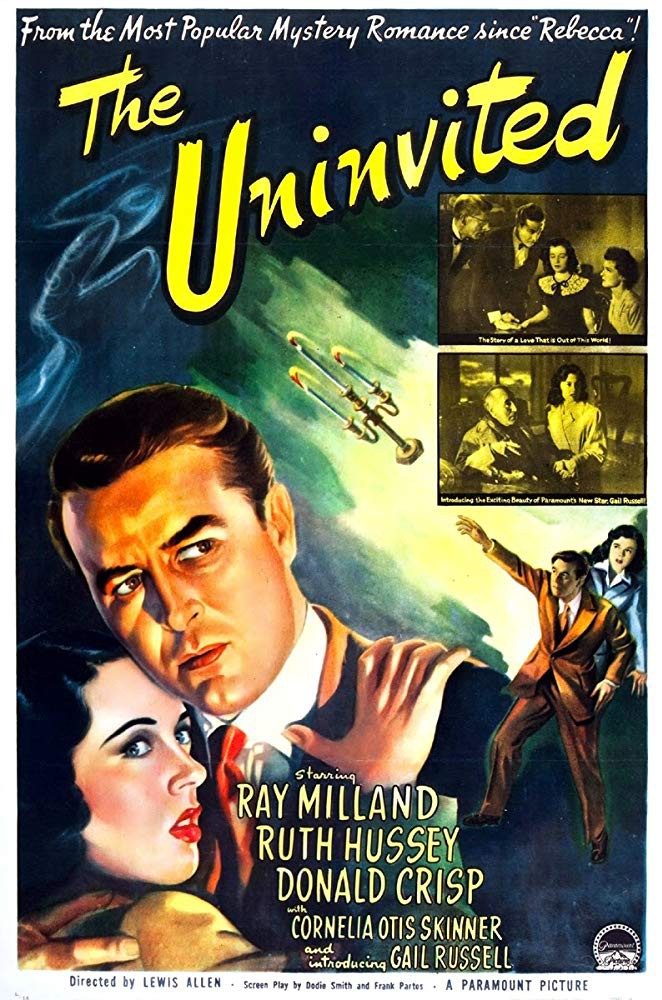 SE:  I think, ya never know.  You just never know anything Freddy.  No one wants to make a bad movie.  At least most people don’t’ want to make a bad movie.  You just never know.  When you have elements like Peter Bogdanovich, Cher, and as it turned out Eric Stoltz.  Not to mention Dan Lester,  who won an academy award for it. And you know, it’s an incredible tale.  It’s an incredibly heartfelt tale.  I have very fond memories of making that film.  Peter Bogdanovich gave me my greatest entrance ever in a film.  That was a lot of fun that day.

FB:  What was the worst job you’ve worked.

SE:  It was working in a plywood mill in Eugene, Oregon.  It wasn’t that the plywood job was bad.  There were a couple of nights where a friend and I were cleaning out this pit.  It was full of lard and it had all these chips in it.  I remember my feet getting cooked in this water we were walking in.  It was so full of whatever it was full of.  I remember the skin peeled off of both of my feet.  I was in pain for a long time.  I was running track at that time.  That’s why I remember that so well.  I’m no stranger to manual labor and I’m no stranger to hard work.  I’ve had a lot of difficult jobs along the way but it made me the man I am today.

FB:  Well we all love this guy, so you’re doing something right man.  You married Katharine Ross in 1984.

FB:  I believe you met on the set of BUTCH CASSIDY AND THE SUNDANCE KID?

SE:  Nope.  We actually didn’t meet there.  We met 10 years later on the set of THE LEGACY.  A gothic horror movie shot in London.  I’ve had people come up and tell me how great I was in Butch Cassidy.  I knew right off the top they were full of shit. 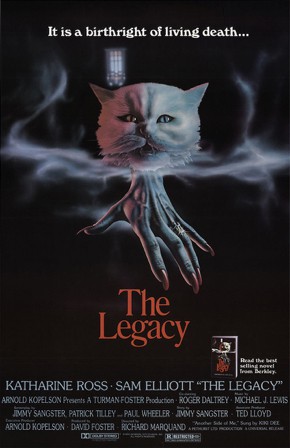 SE:  I was literally a shadow on the wall in that movie.  At that point of time I was smitten by her, like everyone else in the universe.

FB:  So what’s your secret to having such a long marriage, especially being in Hollywood.

FB:  I love it!  Thank you for that Sam, I appreciate it.  I live in Sacramento and I see you were born here.  I was wondering if anything stood out for you about the city here, good or bad?

SE:  There are a lot of things in that city that stand out for me because that’s where I grew up.  I was born there in 1944 and I left there in 1957, when I moved to Portland, Oregon.  I lived down there off of Freeport Blvd.  I lived right across the street from where I went to grade school and middle school in Hollywood Park High.  Some of my fondest memories are all the time I spent at William Land Park at the Zoo.  I used to go fishing in the ponds there all the time.  I rode my bike over to the Sacramento River and I’d try and catch a striped bass.  I have a lot of good memories of that town. 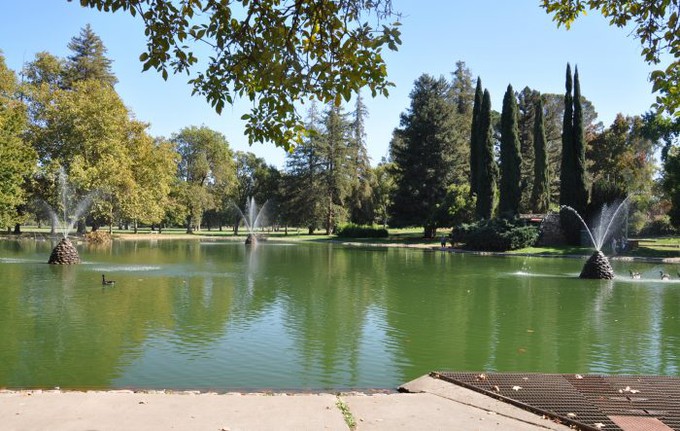 FB:  You are literally talking some of my childhood there.  That was awesome.  What’s your favorite horror movie man?

SE:  Holy shit!  Man, that’s a tough one.  What’s the one that Billy Friedkin made?  I’m drawing a total blank on it now.  It’s THE EXORCIST I’m thinking of.  Not sure if Friedkin directed it but THE EXORCIST for me.

FB:  Yessir, Billy directed it.  Your role as Bobby in A STAR IS BORN finally got you a lot of accolades.  How does that feel to really get recognized?  And was it as hard for you to see or hear Bradley Cooper in that film as it was for me?

SE:  Bradley had such a load.  He was packing such a load there, directing that film.  Collaborating with everybody on every side of the camera and gaining their trust.  At the same time he transformed himself into this character.  He learned how to play the guitar.  Sang like a totally believable rock singer, in a different voice than he’s ever used before.  It’s an outstanding directorial debut and an equally outstanding acting performance.  I just can’t say enough about Bradley.  That movie wouldn’t have been made without him and we wouldn’t be having this conversation about that movie.

FB:  He blew me away.  You were great in it too.  You were the moral compass keeping his character tethered to home.  I’m glad you’re getting recognition too man.

SE:  It’s a real honor.  Ya know, I got into this business wanting to make movies when I was a kid in Sacramento.  I used to go to the Sequoia Theater and watch a lot of Saturday matinees and got hooked on wanting to be an actor.  I always had tunnel vision about it.  It wasn’t about awards.  It’s never been about awards.  It was always about the work.  To be a part of this thing.  To see people getting recognized on all sides of the camera for A STAR IS BORN, with all the work we put into it.  I’m just grateful it’s all come my way and I feel very, very fortunate.

FB:  You come across as incredibly humble man.  Are there any new projects you’d like to tell our readers to keep an eye out for?

SE:  I started and was back today on THE RANCH again.  The series I did for Netflix.  We have 10 more episodes and then it will be over with.  Beyond that Freddy, I don’t’ know what’s in the cards yet.  We’ll see. 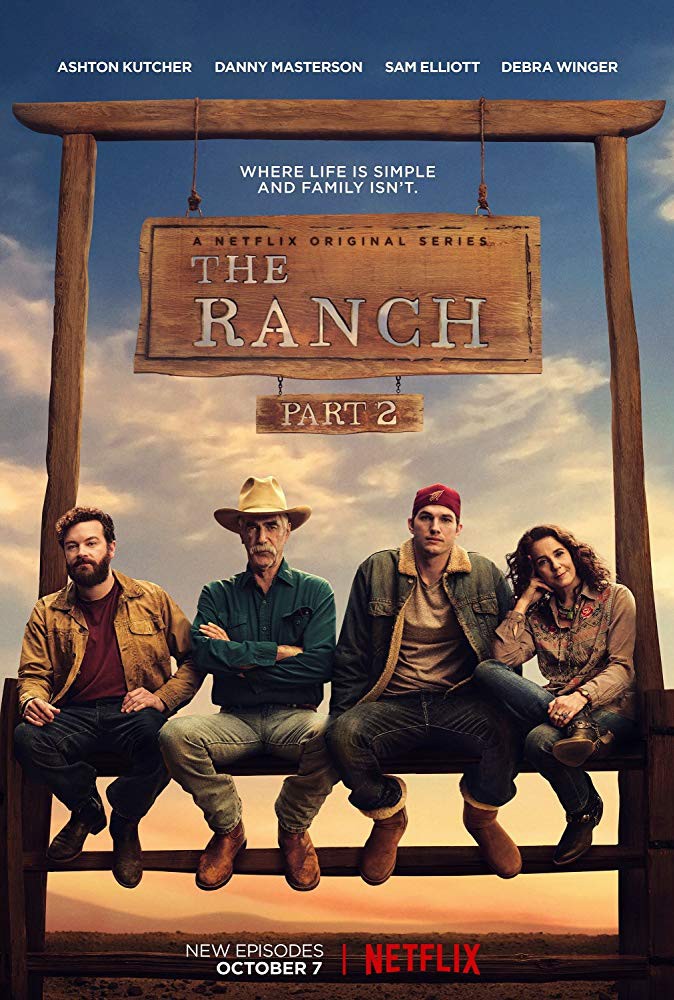 FB:  Thank you for your time today Sam.  It was truly an honor to speak with you.

SE:  All right, well give my love to “The city of trees.”

SE:  You too Freddy!