SALAD FINGERS Returns to Weird Out the Internet! 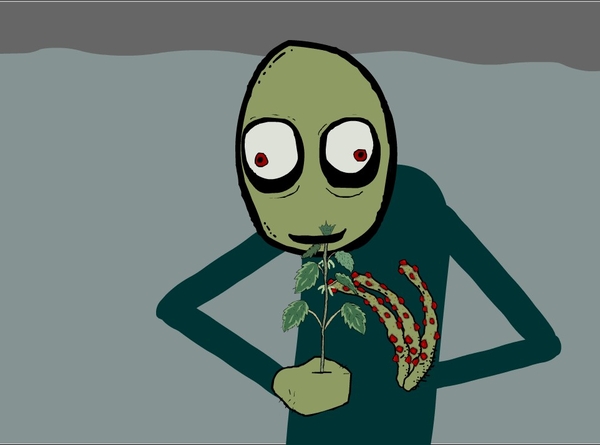 SALAD FINGERS is a British flash animation web series created by David Firth in July 2004, which first premiered on the internet on Newgrounds. There were a total of ten episodes uploaded to both Newgrounds and YouTube. It’s been five years since we saw a new one, and well, David Firth is still at it apparently with those sweet Patreon funds. He dropped a new and much better animated episode GLASS BROTHER on YouTube yesterday!

What exactly IS SALAD FINGERS, though? The best way I can think of to describe it is what would happen if David Lynch made cartoons. The show is designed to make you feel uncomfortable and disgusted, but find dark humor in it at the same time. It follows Salad Fingers, a thin green mentally troubled man who finds comfort in his finger puppets.

I’ll admit as a teen in the 00’s I enjoyed it because it was “lol spooky and weird X3”. Though now, as an adult that can empathize and have an understanding of mental illness, I just watched this and felt bad for Salad Fingers. He clearly suffers from schizophrenia, had an abusive mother, and is desperate for company.

That considered, you might want to make sure you’re in the right headspace before watching this, whether or not this is your first time encountering SALAD FINGERS. And no, that's not a penis in the screen grab.

Though SALAD FINGERS hasn’t won any awards, it spread across the internet and most people I encounter remember it. The first seven episodes were shown back to back in Australia at the 2007 Sydney Underground Film Festival at the Factory Theatre.

Does SALAD FINGERS hold up? Let us know what you guys think!