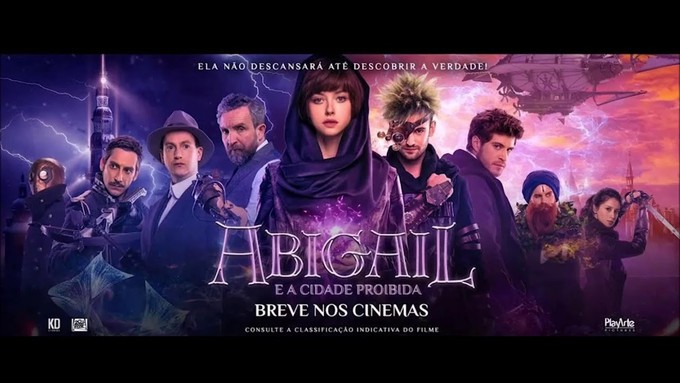 Hey folks, Harry here...   like a good American, I'm in lockdown and trying to find ways to not go absolutely stir crazy, which is why film is so important for just occupying your mind in-between reading stories about what is happening in the world, advice about not panicking and just being chill.

When you read that Tom Brady won't resign with the PATRIOTS, it certainly does seem the END is NIGH!   Right?   So, what to put on?  This morning I've put on the Russian Plague Fantasy called ABIGAIL.   It is directed by Aleksandr Boguslavskiy and begins as a story about a city in the grip of some manner of pandemic.   The business centers shut down, restaurants & theaters shut down.   Officials in threatening outfits, not unlike Kronen in the first HELLBOY, working for the government tasked with killing people the manifest the stage two of the illness before it reaches stage 3.   The first 25 minutes of this were very uncomfortable to watch in our new reality...  but then...

Things change.   Our main character of ABIGAIL Foster, played by Tinatin Dalakishvili, escapes the city square area.   You see, Abigail's father, played by Eddie Marsan, has gone missing, persumably killed, but who knows or can trust the word of the government.   Abigail's father apparently was something special and as Abigail quickly finds out... there seems to be not hallucinations brought on by the virus, but MAGIC!   MAGIC IS REAL and the government is terrified of "infected people" discovering their super powers.  Thus the killing.

The plot twists and turns and there's a very definite turn towards the Steampunk realm & there's weird Time Travel aspect - absolutely gorgeous wispy magical stuff - but the overall lesson of the films is...  Don't Trust Your Government, Seek No Medical Attention When You See Impossible Shit & Discover Your Magical Power and FREE THE WORLD by giving everyone access to their own magical powers by destroying the...  well, that'd be telling.

The writing and acting leave a bit to be desired, but the timing of the release of this thing and the beauty of it makes it worth checking out, even if...  it is a dangerous load of hooey.   Wash your hands, stay at home and take care of those you love.

The film is available to buy on most services!