Barbarella Gets Festive with Riley Dandy About CHRISTMAS BLOODY CHRISTMAS

Hey, friends. Barbarella here. The holidays are upon us, and that means Christmas movies roll, not unlike Santa after losing his footing on a sloped roof, into theaters and homes around the globe. Yet, the old classics and rom-coms masquerading as holiday movies don’t bring joy to everyone. Sure, they can be entertaining, even if it’s only because they grant one the opportunity to exercise one’s cynicism, but for those who live and breathe genre, Christmas movie options can be a bit depressing. Luckily, genre fans get the best of both worlds this year in Christmas Bloody Christmas. Writer and director Joe Begos offers a violently festive slasher flick starring Riley Dandy and Sam Delich. It will be in theaters and streaming on Shudder December 9, 2022.

From the red-and-green color palette to the rampaging Santa technology, the movie screams Christmas at every turn, while its characters just scream. While fun, it’s the kind of movie I’d never suggest my dad watch. He is ridiculously offended by bad language, and this one has more swearing in the first five minutes than probably anything he could watch without cringing. To him, “Ted Lasso” is too offensive, which was not the takeaway I expected when I recommended it to him. To me, words are neither good nor bad; they are merely ways of communicating. People just deciding that certain words should be off-limits and everyone going along with that seems random and a bit silly. While I personally like to save my swearing for times that warrant it, like the time I broke my toe, I don’t care what words people use to communicate their ideas, as long as they are effective. While this may seem like a complete tangent, it ties into my interview with actor Riley Dandy who plays the foul-mouthed cool chick, Tori Tooms. In fact, I told her about my dad’s reaction to “Ted Lasso” and asked her about the language right out of the gate. Check out our conversation! 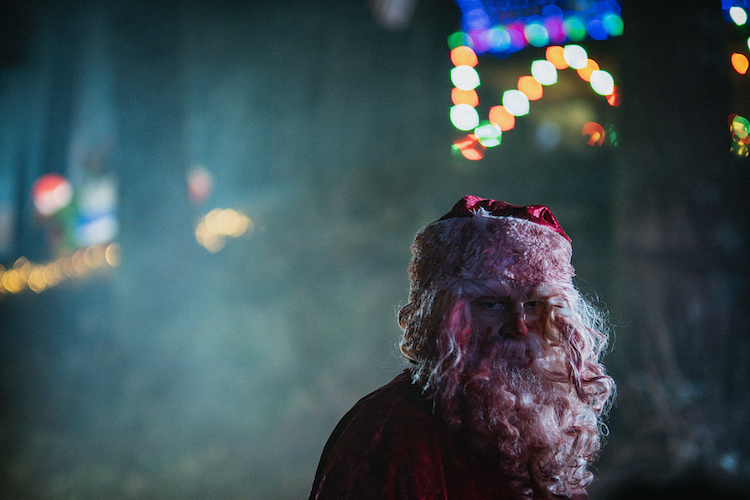 It seems like y'all were going for the record number of F-bombs in this movie. How do you think that your family and friends would react to Tori's swearing, and how was it for you getting to (or having to) curse like that?

“That's so funny; no one's asked me that yet. It's so funny because my mom has always said, "Both my daughters have such a potty mouth," and then I filmed this, and I came back, and I have a ten-year-old niece, and she was like, "Wow, you're really cussing a lot these days." I think that's the overall voice from the family. They're like, "Wow, you really cuss a lot now,” so I've had to unlearn that. And I blame it on Joe Begos. I blame it on the director. I blame it all on him.”

What do you think he was trying to say with the character, giving her such a potty mouth?

“He didn't specifically say to do that; he just didn't mind if we did it. I think it kind of embodies her as a whole. She kind of doesn't give a fuck about anything or anyone that's not going to serve her, and so maybe we kind of say that in this story, as well. Maybe. Maybe that's me making an excuse for it. I don't know. I mean, I love it. I really had a great time.”

In my weird brain, I imagine your prep for the role including a lot of drinking and listening to heavy metal and maybe some form of dodging, running and ducking, but what was your actual prep like?

“Pretty similar to that, yeah. Tori could absolutely drink me under the table. I don't smoke, and I was smoking herbal joints in this, and I really had to get used to even just ingesting smoke. That was a big one. It's so funny because after filming this, I was like, "Wow, I'm such a nerd. I'm so square." Tori's way cooler than I'll ever be. But yeah, prepping for this, Joe and I made a joint playlist of music that she would listen to, and I watched a bunch of movies that she loves and tried to become as close to her as I could.”

Cool. My understanding was that this was filmed over two months on all night shoots. How was that experience for you?

“Pretty epic. It was cool to start work at 6:00 PM and then finish at 8:00 or 8:30 in the morning, and then I'd come back to my hotel covered in blood, just walking through the lobby up to my hotel room, and there's actual tourists checking into the hotel at 8:00 in the morning, and they're just like, "What is happening?" It was completely normal for me, so I completely forgot that I looked absolutely terrifying, and then I would come up, and my fiancé would be just waking from his slumber, ready to have a peaceful day, and I'd be standing over him covered in blood. That was pretty funny. It took me a while to get adjusted to a normal sleeping schedule again.” 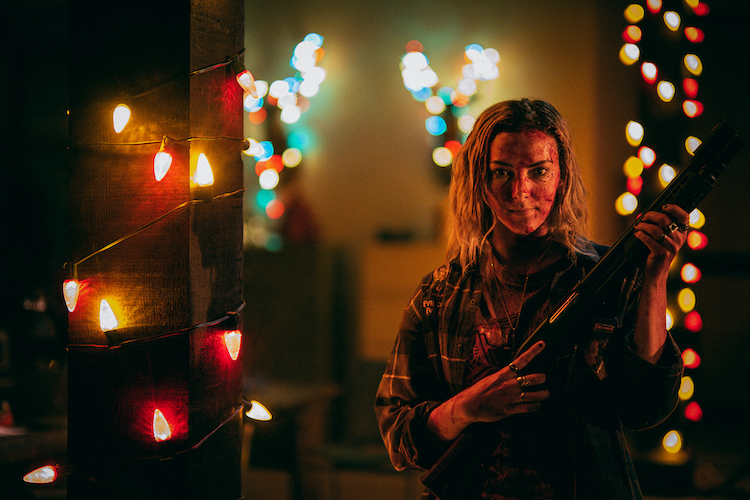 Oh, I can imagine, yeah. You guys stayed in a haunted hotel, is that correct?

Did you hear any good stories about the hotel? What was it like for your fiancé sleeping there by himself when you're off shooting all night?

“Oh my God, that's so funny. We all got dinner one night, and we were all talking about ghost stories that we had heard about the hotel. My fiancé, who's terrified of anything horror-related anyway, was like, "Can you guys fuck off? Can you guys not?" He was like, "I have to sleep there at night, you guys get to go film. I'm the one that has to sleep there at night." It took everything in us to not tell him what we heard.

“But there was one night when Sam Delich, he plays Robbie, and I were staying up on a Saturday until 4:00 AM because we were trying to keep our sleep schedule. We were hanging out in the lobby, and there was this random gold balloon that floated down the stairs and was just hovering in front of us. I think that's the most scared I've ever been. I was just staring at it, and Sam started talking to it, and I was like, "I'm going to bed. I'm not messing around with this." Then, it just floated away, and I'm sure there was a draft or something in the room. I don't know, but it was very scary.” 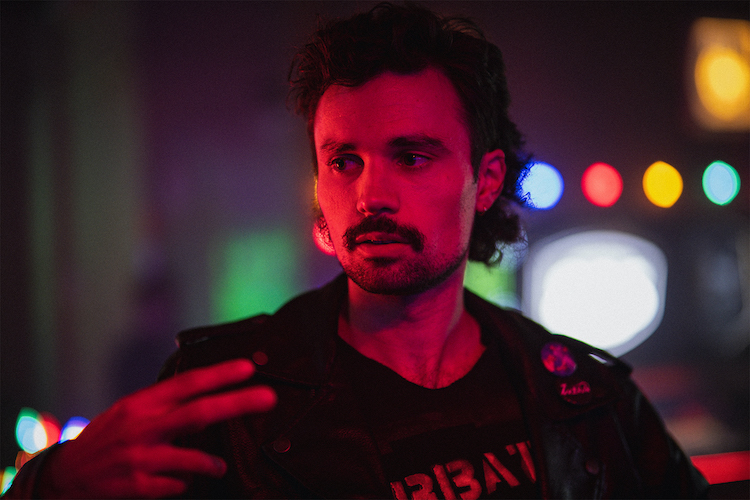 “Also, the hotel staff said that when you leave, you have to say, "Do not come with us. We don't want you to come with us." And my fiancé and I typically don't really entertain that kind of stuff, but we both looked at the hotel and said, "Don't come with us,” and we left.”

Wow. Christmas Bloody Christmas is obviously a technology-gone-terribly-wrong story. What are your thoughts on technology and the direction in which it's going?

“Yeah, I mean, I'm definitely pretty scared that that could happen, and I think robots are way smarter than we are. All I can say is I hope I'm long gone before that happens, because I do think it will.”

It's just a matter of time, right?

Yeah. Tori has clearly a crazy Christmas. What's been your craziest Christmas, and what made it so crazy?

“I do have a crazy Christmas story. We were flying to Australia one night on Christmas Eve, and our flight was supposed to leave at 10:00 PM. I think we were delayed until 4:00 in the morning, so we spent a Christmas Eve to Christmas at LAX, drinking until the bars closed. I didn't know that the airport shut down; I thought that the airport just stayed the airport. We were getting told to leave this bar, and I was like, "Well that's ridiculous." I think by the time we got on the plane, it was 4:00 in the morning, and everyone was sleeping on the ground, and everyone was very drunk because there was nothing else to do. I think that that was probably my craziest Christmas.”

I believe that this was shot mostly chronologically. What are the pros and cons for an actor in shooting that way?

“They're almost all pros. I don't know if there are any cons, for me, at least. I think shooting very close to chronologically helps you know exactly where you're at in the story, you know where your mind's at. Typically, I create a little cheat sheet on where we are, what's just happened in the story, blah, blah, blah. And for this, I very rarely had to do that because I knew exactly where we were coming from. 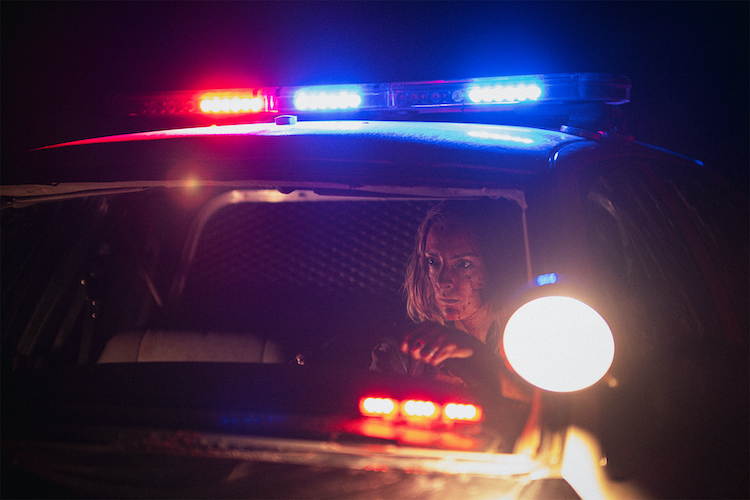 "It felt like a big crescendo to the end, as well, because the last day of shooting was our big epic final battle. There’s something very poetic about that. We’re filming the last scene of the movie on the last day of filming. The sun's coming up, and we're seeing the sunrise after we've just wrapped this film that we've poured our hearts into for two months. I'm very thankful for that, actually.”

Yeah. What was the most memorable night on set and why?

“There were quite a few. I think one of the ones that comes to mind is it's just this walk-and-talk scene between Robbie and Tori. They're walking down the main street. The reason that's so memorable is because the dialogue that we have is full of very niche pop culture references that not many people get, so I had to learn those. [Joe] comes up to us this one night, and he's like, "Hey, scratch all the dialogue that you've learned. I just wrote you seven new pages of dialogue on the back of my script." It’s all handwritten in Joe's chicken scratch on seven pages containing more niche references that I've never heard of in my life, so Sam and I are freaking out, and Joe's like, "All right, we need you on set in half an hour."

“We had seven pages to learn, so Sam and I are huddling over this script, learning lines, running lines, YouTubing these references, and then figuring out like, "Oh, that makes sense. That's funny. I get why you wrote that in there now." We looked at each other, and we were like, "If we get it, we get it. If we don't, we'll figure it out." After the first take of that scene, we both looked at each other, and we're like, "We did it." I think that was a big one, and then filming the final fight scene with the overhead sprinklers and fighting the robot, that was just a huge bucket-list tick. It was pretty epic.” 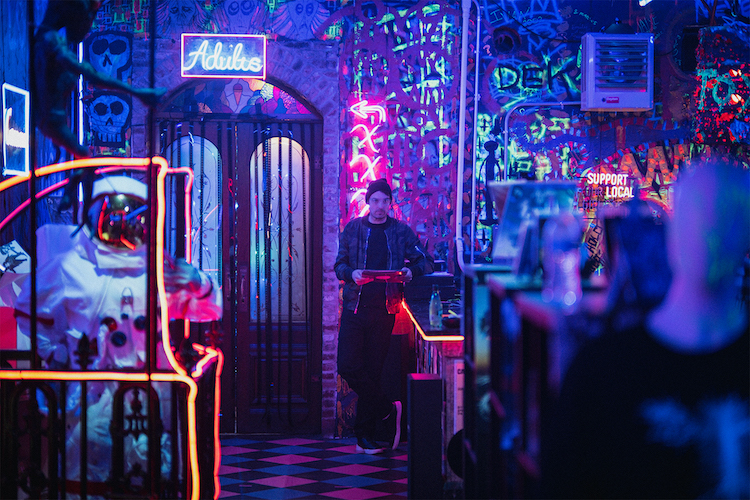 It looked like a lot of fun to shoot. Was it as much fun as it looked?

“Yeah. It was everything. It was the most fun I've ever had. Joe's amazing. He operates the camera, as well. I was freezing because we're soaked the whole time, but Joe was turning down any coats or tarps or anything because he was like, "If Riley's freezing, I'm going to be freezing." He kind of suffered through everything with me, which was awesome.”

It’s awesome to hear about a director going above and beyond to make the actors feel respected and understood. It was also awesome speaking with Riley Dandy, who stars in Christmas Bloody Christmas, coming to theaters and streaming on Shudder December 9, 2022. With a bit of an 80’s horror vibe and a bit of modern mayhem wrapped up in a whole lot of festive chaos, watching it may be the perfect gift to give yourself if you’re looking to escape the traditional feel-good holiday fare this Christmas. Check out the trailer, and happy holidays!