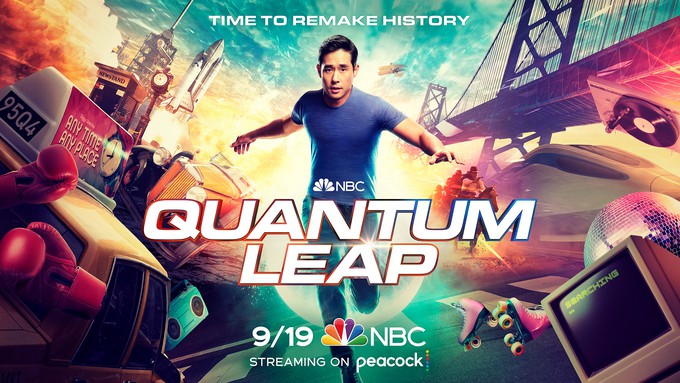 So far I’m liking this series. As many of you are aware I was super apprehensive when this was announced. Now that my sickness has passed and I am no longer knocking at Death’s door begging for mercy, I was able to view this second episode with a clear head and an open heart. Dr Ben Song is growing on me, so is his holographic partner Addison and I’m starting to really enjoy where they are taking the series. Although it is a continuation of the original series, the new stuff it introduces really makes it feel fresh and brings an element of fun to the proceedings.

I've come to realise I can’t talk about this show or even review it without a fair amount of spoilers because, as this is the second episode, there would be zero to talk about. You have been warned.

The second episode sees Ben wake up in the body of an astronaut that history says died on a spacewalk while fixing a heat shield on the space vessel “Atlantis”. The episode to me was about the glue that holds a team together and the parallels of this in 2022 and 1998. Ben is the mediator, the team leader and the heart of the 2022 team and without him, they feel fractured, while on Atlantis, Ben has to use these skills to make the team come to a compromise that will save not only his life but the lives of the whole crew. He also learns one of the fundamentals of leaping in that if you change one thing, that in turn creates a new problem and it's not always good.

Meanwhile, in 2022, Addison ransacks her own apartment to find clues as to why Ben jumped into the accelerator. She finds a thumb drive but realises it's coded, she asks Ian for help and hopes that Jen can help them crack the encryption.  When they speak to Jen, she informs them of Janice Calavicci’s involvement and tells them who she is and what her connection to the quantum leap project is. This side plot is likely to be the beginning of the series arch. What Janice and Ben were into is anyone's guess but this episode certainly points in a very specific direction. Ben looks like he has teamed up with Janice to find Sam. I enjoyed the side plot about the thumb drive, it was a nice way for the team to come together and realise that if they want to get to the bottom of anything, transparency has to be the way forward.

This episode is surprisingly true to the original series and features a nice deep reference in the form of a cameo by Susan Diol reprising her role of Beth from the original series, hardcore fans like myself are sure to find this not only touching but a sign that this Quantum Leap really did its reading, it knows its stuff. I personally loved this.

Other reviewers will give you a blow-by-blow description of the episode but I don’t think that’s why you are here. You’ve already seen the episode and you came to read my thoughts on it, which frankly, I’d rather do. As far as secondary episodes go, I found this fun, intelligent and above all true to the source. The episode fleshes out Ben a little more and puts him in a situation that really shows us why he is the leader of the project. Although I found him to be remarkably calm given his character's situation, the back and forth between Addison and himself made it fun. The episode gets deep into the subplot with Ben and why he leapt in the first place but it never detracts from the actual leaping part of the episode which I found equally split providing a nice even story.

The end stinger however makes me believe that Scott Bakula is currently doing a bait and switch by telling everyone he passed. I do hope this is the case however showrunner Martin Gero spoke with Collider recently and this is what he had to say on the subject;

“I will respectfully always ask him to do the show. I have a very, very good idea that Deborah (Pratt, producer) knows about and that Don (Bellisario, Producer) knows about. I think it could be really exciting. But I also completely respect his wishes. He knows our enthusiasm for him. He knows our enthusiasm, our love, and our reverence for the old show. It’s a no right now. It would be pretty amazing to have him back, but I don’t know what our timeline looks like, or even if it’s possible.”

Although the series premiere has come in with a generally positive reaction from fans it currently has a 47% score on Rotten Tomatoes and 4.9/10 on IMDB.

Quantum Leap airs on Monday Nights at 10 pm ET on NBC while all five of the original seasons are available to stream on Peacock.

Next week's episode is titled “Somebody up there likes Ben” and sees Ben leap into the body of young boxer Danny Hill in 1970s Las Vegas. Until next week, stay safe but above all, stay cool...