Howdy, y’all! McEric here with a review of an indie film that, surprisingly, is still seeking distribution. It’s called HAPPY FACE and comes from writer/director Alexandre Franchi (THE WILD HUNT).

The synopsis that I was originally presented with was “Desperate to become less shallow, a handsome teenage boy deforms his face with bandages and attends a support group for disfigured people.” Sounds intriguing enough, but I’m much happier with the logline I found accompanying the teasers I found online:

Part coming-of-age story. Part Dungeons & Dragons fueled fable. Part antidote to the Tyranny of Beauty. No makeup, no sfx, no filter. This is HAPPY FACE.

The movie opens with a voice over from Vanessa (Debbie Lynch-White), the support group leader, then abruptly to tight shots of the faces of its diverse cast, filling the frame, filling your eyes with people who the filmmakers have described as “facially different.” There is a burn victim, a head trauma survivor, a cancer-survivor who lost his nose, a woman with Treacher Collins Syndrome, and several other actors with conditions that set them apart from the normal beauty standards to which we largely subscribe. And among them we meet Stan (Robin L’Homeau), a young man whose face is wrapped in bandages, his affliction hidden from his bared brothers and sisters. Vanessa promises to lead the group to acceptance of their self-worth through Cognitive Behavior Therapy, and her confidence in her ability stands, even when her faith in her subjects falters.

We soon discover that Stan is the thing that does not fit, the hideous outcast of The Twilight Zone’s “Eye of the Beholder.” He carries no disfigurement or affliction; he’s achieved his facial differences through Scotch tape and gauze, a la Jim Carrey in YES MAN. 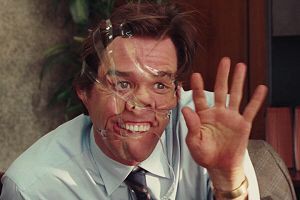 So why is he there? Is it truly to be “less shallow,” as the IMDb synopsis suggests? I suppose there’s a case to made for that, but as the kids say, Weird flex, bro. To gather its validity would be to first appraise his depth.

Stan is a complicated young man. I saw a lot of Kieran Culkin’s titular character from IGBY GOES DOWN in him. He is confident, despite a heavy dose of self-loathing, attractive, bilingual, cultured, and seemingly affectionate. We are treated to many scenes in the small apartment he shares with his mother (Noemie Kocher) wherein he seems engaged, invested, and compassionate. However, as we learn she is battling cancer, her imminent helplessness and fear come lashing out at him, calling him callous and uncaring for playing D&D with his friends rather than watching her disintegrate.

To be fair, Stan does keep his distance from home and mother for much of the film, hitting the bars and effortlessly bringing home attractive young club-girls to lose himself within. It seems, though, that the stigma of his mother’s afflictions follow him even in his libido, and he rarely “closes the deal.”

When Stan is outed at the support group, because of course he is, he explains that his mother is fighting cancer and her doctors recently found tumors in her jaw and head, which will be excised and cause noticeable damage. It was she who originally booked a space in the support group, you see, and as she convalesces he takes her spot in hopes of flooding himself with the realities of the facially different so that he can be more adequately prepared to help her deal with the inevitable changes in her public perception. This doesn’t sound unreasonable, and the group reluctantly accepts him, as he leverages his charisma and looks to shift into a leadership position within. 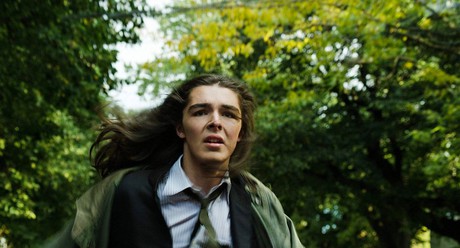 The rest of the film is concerned with Stan’s efforts to assist the group’s members through flood therapy for them, as well: he encourages them to run headlong into the insults and stigma and turn it against their bullies and attackers. Sadly, we lose half the support group after he first takes the reins, but the characters we’re left with carry the film expertly. They endure Stan’s punishment, all in the pursuit of hardening them for the brutal world, and we learn a bit about each.

The true revelation of the film is Stan, himself, and what we learn about him, and by proxy, Alexandre Franchi. According to the film’s website (which is one of the more engaging ones I’ve seen in a while), the story is semi-autobiographical and reflects what he saw as he “grew up witnessing his single mother’s struggle with cancer.” Stan is a well-rounded sociopath who uses every tool in his arsenal to avoid or escape feeling anything that life intends to subject him to. L’Houmeau is captivating and brave in the role, baring himself emotionally and physically to translate Stan’s compensatory fearlessness in social constructs over his crippling fear of personal worth.

The inclusion of real actors with facial differences is a daring stylistic choice but one that largely seems provocative as Stan’s issue isn’t with his mother’s impending physical appearance but rather her mortality. Stan isn’t worried his mother is going to become a freak; he’s fully aware she’s going to die. His diversion into her support group is just that: it’s another thing to fuck, to lose himself in, so that he doesn’t have to consider his mother’s diminishing time on this planet. He is constantly bucked against by the group, and rightfully so, and again he uses every tool in his kit to stay in their graces. Whereas he spent early parts of the film on D&D quests with his buddies, he spends most of the runtime running real campaigns with these avatars, even going so far as to give them classes and races as he pushes them further than they can often endure for his own diversion. 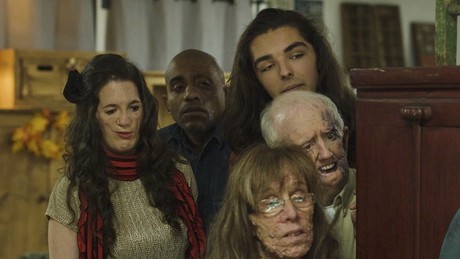 I know this seems a harsh criticism of Stan but I honestly don’t think he’s a bad person. He’s a scared boy, and little more. Due to his influence, by film’s end we see some improvement in some characters, and some who run up against a brick wall, as is life. Stan eventually comes face-to-face with his disfigured elephant in the room and we’re treated to some lovely excerpts from Miguel de Cervantes’ Don Quixote. For the first time he looks at the truly disturbing, hard-to-look-at thing in the room and pushes through it.

Ultimately the film is about the face that others want to see from you. It’s not about physical deformity or disfigurement, but rather bearing to look at the death mask we will inevitably have to place on those we love. It’s about putting on a happy face when your world has crumbled, because bereavement is an actual corporate-measured thing that lasts less than two weeks.

HAPPY FACE is a revelation in filmmaking, featuring some great performances and pointed commentary on the Tyranny of Beauty, as well as some fantastic scenes and inspired musical cues. The acting in some scenes isn’t great (Augustine’s oncologist and nurses look like they’re doing a literal table read) but the core performers’ honesty and sincerity carry the film. As I said earlier, I cannot believe this film doesn’t have distribution yet as it is a smart and original film that demands to be seen. 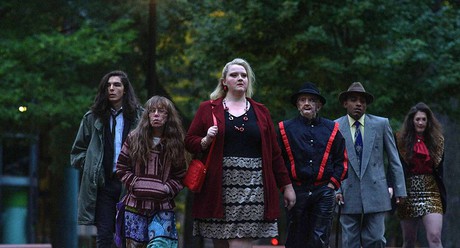 Check out the website and see what you can do to help spread the word: http://happyfacefilm.com/

And obviously, watch it if you get the chance.