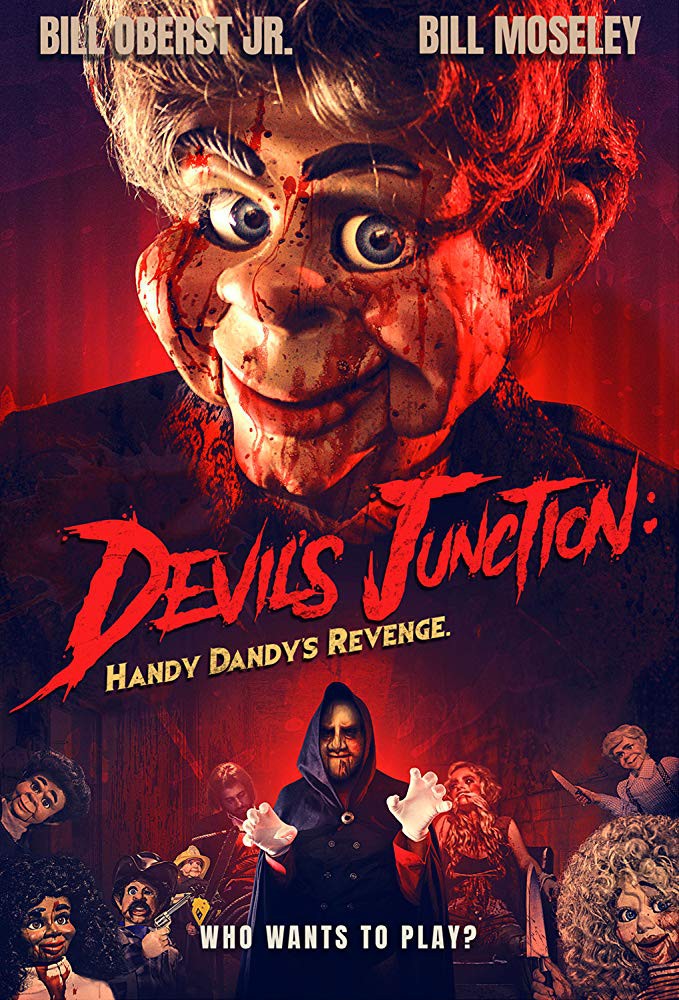 Hey, guys, Prometheus here! If you frequent the site then you know I’m an avid horror geek. There’s just something about a good, campy horror movie that’s so damn entertaining! The jump scares the low budget special effects, the scream queens. I love it! All of it, I can’t help myself.

The classic Universal Monsters! “Drive-in” style horror movies, slasher flicks from the ’80s! Creature Double feature! Elvira! If it was on at two in the morning, you bet your ass I saw it! I ate that stuff up as a kid and not much has changed.

Recently I watched a film that brought me back to those days. Days when horror was fun and took itself a lot less seriously. That film was "Devil’s Junction: Handy Dandy’s Revenge." AKA "Handy Dandy!" 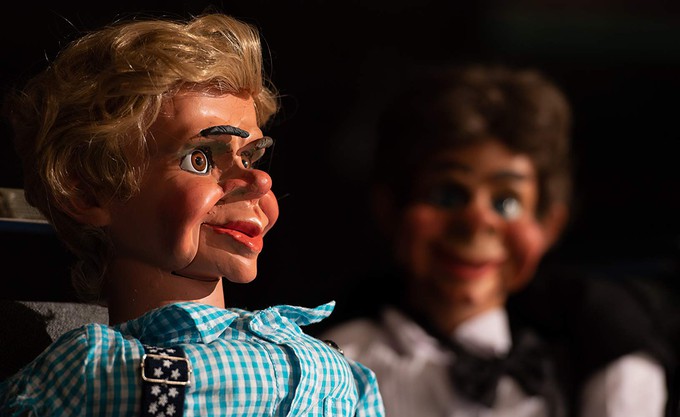 Let’s just put this right on the table. Spoiler warning… It’s about ventriloquist dummies that come to life and kill people in an abandoned tv station. Is it any good? Are you into movies about dummies coming to life and killing people? Then yeah, it’s pretty good! It delivers everything you would want from a film titled “Handy Dandy’s Revenge” plus a few surprises!  It’s fantastically twisted and fun but don’t let the kids show theme fool you. This is not a kid’s movie! Handy Dandy is not fucking around!

"A shuttered TV studio in Detroit is haunted by a magician/ventriloquist from a 1960's children's show, and he's looking for a new live (or DEAD) studio audience." 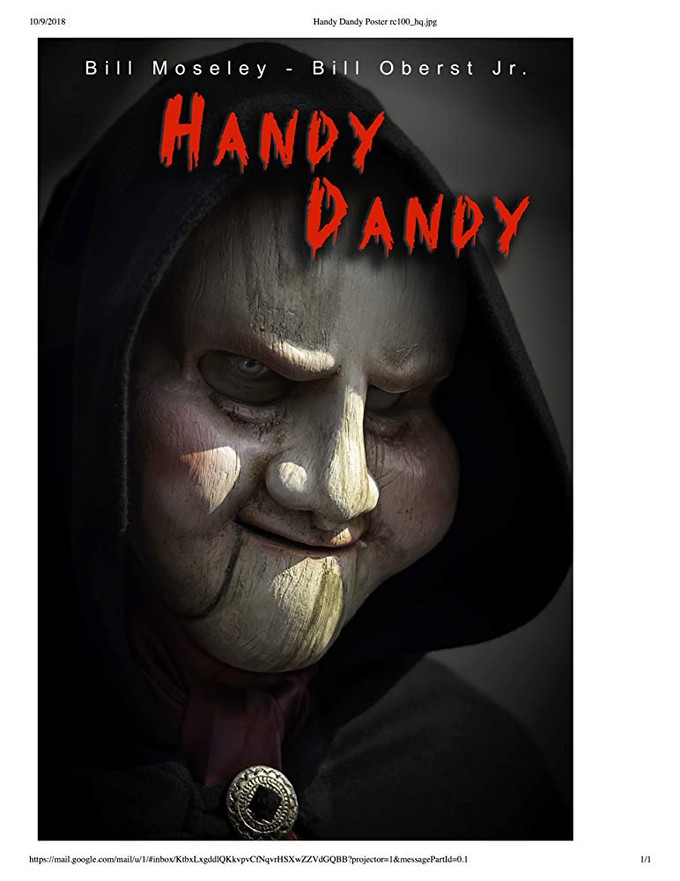 Check out the trailer and all its campy greatness!

The story comes from Donald Borza II, with a screenplay from J.S. Brinkley. It was directed by Jeff Broadstreet and stars Bill Oberst Jr. and Bill Mosely, two actors who are no strangers to the genre. See the full cast and crew here! I had a chance to speak with Bill Oberst Jr. about the film and a few other things (including werewolves!) You can check out our conversation below! 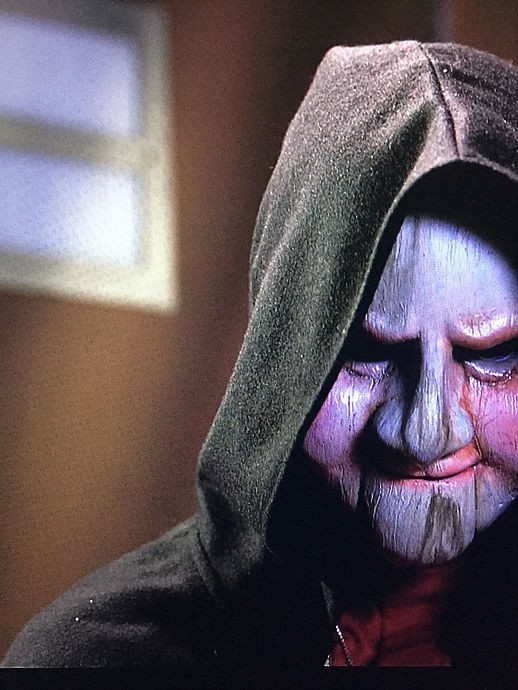 JS: Hi Bill, how are you? I wanted to talk to you about "Devil's Junction: Handy Dandy's Revenge."

JS: Yeah, that was with Bill Mosley...

BO: That’s right, yea Mosley and I worked together on 3 From Hell, and then a couple of months later we ended up doing Handy Dandy in Detroit.

JS: Okay, so you shot it in Detroit?

JS: How did you get involved with the project?

BO: Well, they contacted me and asked me to be in it and asked asked Bill (Moseley) to be in it. We wanted to work together for a while and there’s been a couple of scripts where we were brothers, that were supposed to happen a few years ago and didn’t. We like working together, so I was happy to be there. 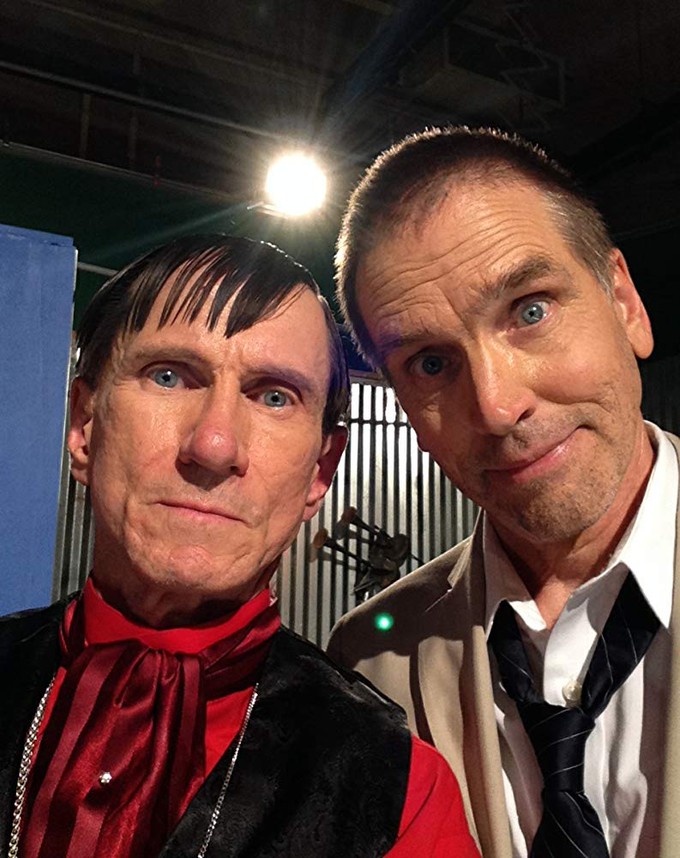 JS: Awesome, I actually just had a chance to check it out myself. I enjoyed it.  I love the kid’s show thing and the dummies coming to life.

BO: Yeah, ventriloquist dummies are about as innocent as clowns.

JS: Some people are just terrified of them.

JS: Yeah, actually I saw that when I was a kid.

JS: Yeah, it used to be a huge thing. It’s always kind of creeped me out. (Laughing)

BO: Well, I want to ask you first what you think is so creepy about it? Because I’m always interested when people find things creepy.

JS: The fact that you can make your voice sound like it’s coming from over there. (Laughing.) I can’t figure it out, and I can’t do it, so I guess it kind of weirds me out.

BO: Oh, that’s interesting! (Laughing) Cause it’s like somebody else can do it. Interesting.

BO: Yeah, I play Mr. Jolly the kids show host and I wanted to give him a distinct look. In another film that I did, called Ditch Day Massacre, I wear gloves. Black gloves. I was an ax killer. He was very fastidious about his gloves. So, I asked the director here (Jeff Broadstreet) if he would be into my character wearing white gloves. So, I got to wear gloves the whole time. It just makes your hands whole characters unto themselves, you know? I wanted my character to be dressed like he himself was a big ventriloquist dummy.

JS: So, the white gloves were your idea?

BO: Yeah, yeah! I wanted him to be like he thought of himself as one of the dummies too. I love putting little touches like that in a character like gloves or like “Circus of the Dead” how Papa Corn has that little curl up top that he’s always playing with. I like the idea of people who are really truly evil, but also have these little vanities like I’m getting ready to kill ya and I’m like “is my tie straight? Does this look OK?”

JS: Right. Like little quirks. It makes them stand out.

BO: Yeah! That really creeps me out! Somebody looking down at their tie to make sure they look good before they eviscerate you… that kind of stuff.

JS: You’ve been in a bunch of horror movies; you must be a fan of the genre.

BO: Love it! Ever since I was a weird, misfit kid. I had everything to make me different that you could possibly have so, monsters were my friends.

JS: I totally understand. I read Pet Semetary in fourth grade so… (laughing.)

BO: Yeah? I remember one Halloween when I was maybe ten or so the Sonic Lodge here, to raise money had an old-time Halloween movie night and played old silent movies. They showed “Nosferatu” and the 1925 “Phantom of the Opera” with Lon Chaney.

BO: I made my grandmother take me. She didn’t want to, but I was like “Meme, you have got to see this! So, I watched the scene of Cheney where mask gets ripped off and his rage and fury as he tosses her to the ground and he says, “Is this what you wanted to see?” I was like “Oh, my God, this is every bit as good as they said it was!”

JS: I love “Nosferatu" too.

BO: Yeah, “Nosferatu” is pretty damn good, really. I thought that was a scarier take on vampires than Bela Lugosi.

JS: There was something creepy about it. Bela Lugosi was great, he was suave, he’s the face you think of when you think of Dracula. But there’s something about “Nosferatu” that’s just… creepy.

BO: Totally. The isolation of the castle, I guess it was just because they didn’t have any extras or anything, it made it look like Jonathan Harker (Gustav von Wangenheim) was the only person in that whole universe except Dracula (Max Schreck.) It was scary.

BO: I gotta go with the variations of the werewolf. Because there’s all different were beasts. Like China had a werebear. Just about every culture has a tradition of man changing into a beast and I like it because it’s metaphorical for what we are inside. I also love the fact that the Wolfman, he can’t help it. He’s gonna kill. He’s gonna do it! He can’t help it and he doesn’t want to do it and that’s really a great analogy. In the New Testament the apostle Paul says “The things that I want to do, I do not do. The things I do not want to do, those are the things that I do” and I’m like “yeah, that’s mankind.”

JS: Yeah, the Wolfman is such a tragic character, because like you said, he doesn’t want to kill. There were even times where he tried to kill himself so that he wouldn’t kill again. Very interesting character.

BO: But once he changes, once he goes over, he’s happy to kill. That’s the thing. He’s like “I don’t wanna do this, I don’t wanna do this” but boy you let the moon shine on him… he’ll rip your face off and he’ll be really happy about it. He might be sorry about it afterward, and you know, that’s us.

JS: Now with all the horror movies you’ve been in, what would you say is your favorite to work on?

BO: That is really, really tough. I think it would be a television appearance which was horror-themed and it was Criminal Minds. I had a recurring character; I was a product of incest in the backwoods of West Virginia. He was this deformed killer who killed just because he had always been rejected and nobody understood him. I really liked it. Additionally, I liked it because the makeup artist, he works with Tarantino and he’s a huge Chaney fan and he said let’s make this character as a homage to Lon Chaney. So, we did that in his appearance and in the way he moved and spoke. The director Mathew Grey Gubler, he’s also a horror fan, he plays Spencer Reid on Criminal Minds. So, he was also into making this a homage to the old wounded monsters we were talking about. I would say of all the stuff I’ve done that’s like the quintessential wounded monster. I really liked that one.

JS: So, what’s next for you? What are you working on now?

BO: I got two movies this fall. Then in January, I’ve got a sequel to a movie I did called “Stressed to Kill” with Mark Savage and Armand Asante. Plus, I’m gonna return to Criminal Minds to kill that character off for their final season. Then I’m touring with my Ray Bradbury one-person show where I play Ray. That’s been really, really exciting to develop because he was a childhood hero of mine.

JS: Where are you going with that next?

BO: Next to Walla Walla, Washington, and Atlanta, GA. Then next year will be the 100th anniversary of Ray’s birth so I’m trying to do as many as I can next year. It’s a 90-minute show and I think it’s really hopeful and inspiring and I think the world really needs something hopeful and inspiring right now. He really believed in humanity and he thought we were going to make it to outer space and keep going.

JS: Awesome! So how can people get tickets for that?

BO: The site is raybradburylivesforever.com. It’s a passion project, I love doing it. 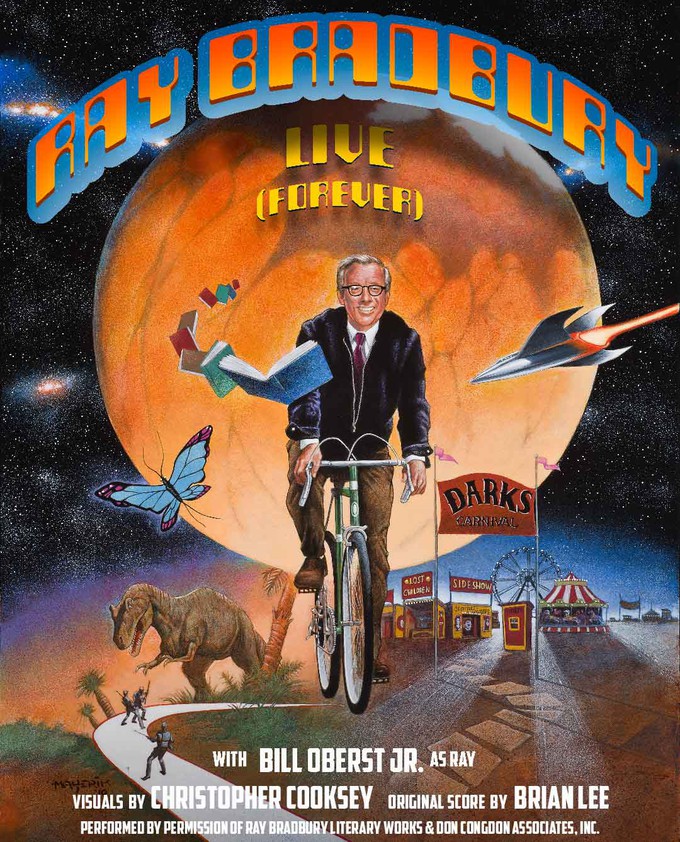 JS: I’ll keep an eye out for your future projects Bill. I enjoyed the movie! I would recommend it to our fellow horror geeks.

BO: Hey, horror geek is the perfect term. Yeah, that’s what I am! Alright! Thanks, brother!

JS: No problem I appreciate the phone call.

BO: Alright man, appreciate ya. I’ll to talk to ya later.

JS: Any time, Bill. Thank you! 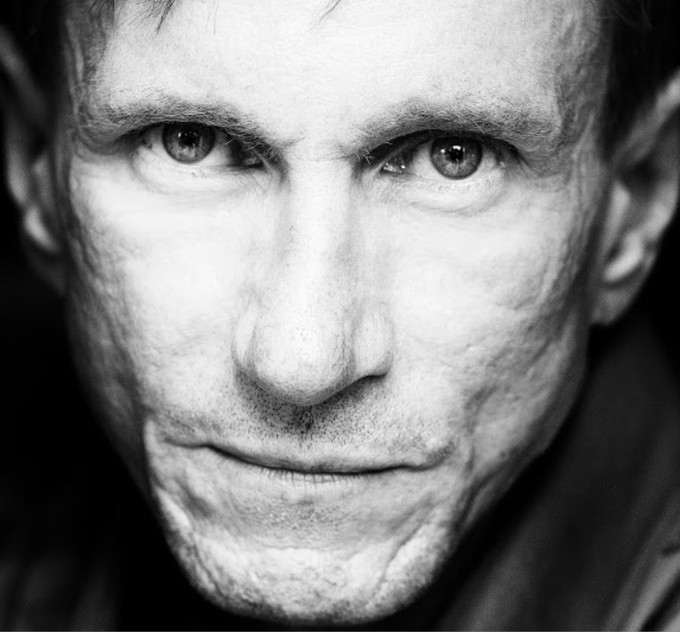 “Devil’s Junction: Handy Dandy’s Revenge” will be available on VOD and DVD Nov 8th! If you’re looking for a fun, campy horror movie to throw popcorn at while you yell at the screen, give it a go! 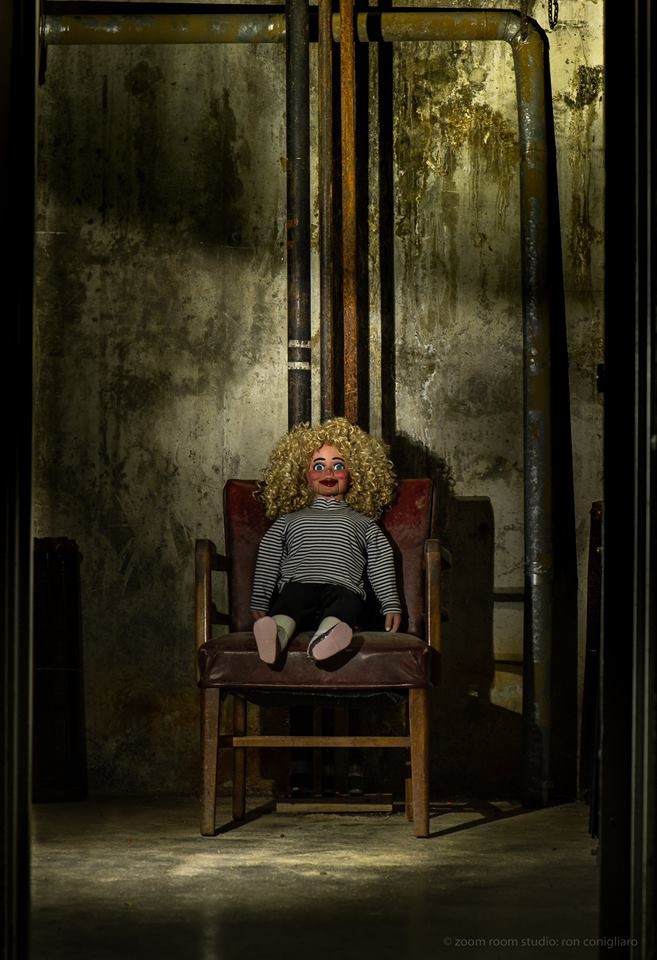 That’s it for now folks! As always comment below and let me know what you think! Are you a fan of "silly" horror, like me? Until next time, keep on geekin’ on, my friends!