Prometheus Chats With PLUS ONE Stars Jack Quaid and Maya Erskine!

“In order to survive a summer of wedding fever, longtime single friends, Ben and Alice, agree to be each other's plus one at every wedding they've been invited to.” 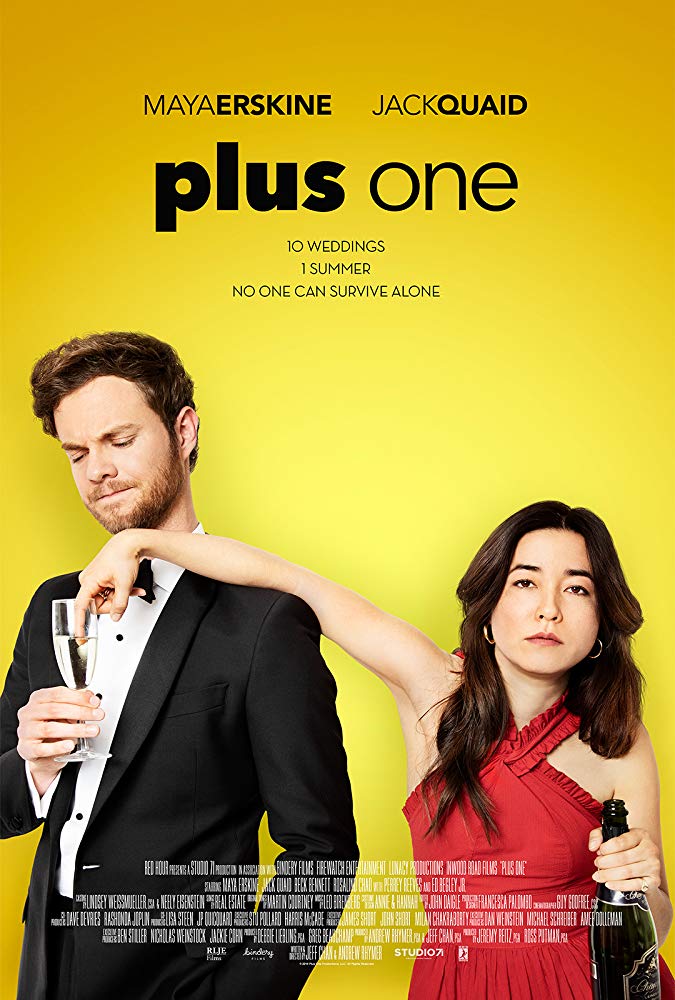 PLUS ONE was both written and directed by Jeff Chan and Andrew Rhymer. The film premiered at the Tribeca film festival on April 27th and is set to open in theatres on June 14! I had the opportunity to chat with the two main stars, Jack Quaid and Maya Erskine, before the Tribeca premiere and they were both awesome! I also had a chance to watch the film and while I won’t spoil anything, it’s the perfect date movie. Take your boyfriend, take your girlfriend, husband or wife and go see PLUS ONE! Or heck, go alone! It doesn’t matter. Either way, you’re going to laugh. Jack and Maya are adorable together and it has a little something for everyone. (Well, maybe not the kids. Don’t bring the kids!)

PLUS ONE is cute, witty, and at times, outright hilarious. It takes a refreshing break from the run of the mill, fairy tale RomCom formula. Instead, it’s grounded in reality, and reality isn’t a fairy tale. This film gets that! The characters are flawed, like most of us, and in turn, are easily relatable. 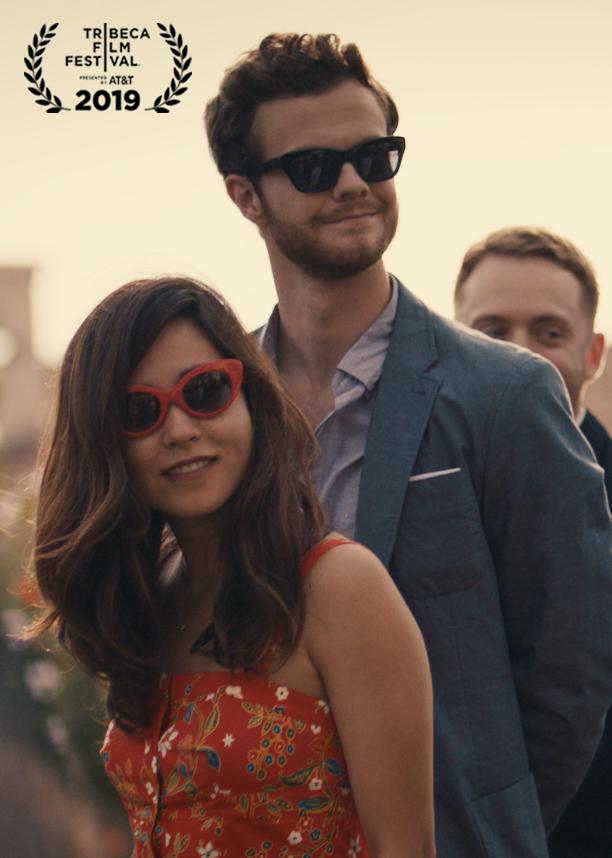 It was a pleasure chatting with Jack and Maya and you can check out the full interview below! There are some pretty hilarious details towards the end! Enjoy!

JOSHUA: Hi guys, how are you?

MAYA ERSKINE: Good, how are you?

JS: I’m doing great, thank you for asking. So, I see you two are starring in a film together, PLUS ONE.

JS: Written and directed by Jeff Chan and Andrew Rhymer set to premiere tomorrow at the Tribeca Film Festival in NYC…

JS: Awesome, what can you tell us without spoiling anything?

JQ: Well It’s a, basically it’s a RomCom about two people who are longtime friends going through, in a time in your 20s, late 20s or early 30s when everyone you know is getting engaged, getting married. And they decide to latch on to each other, basically just brave the storm of all these weddings.

JS: Awesome! And I see PLUS ONE was named by the Wall Street Journal as one of five movies to see at the festival this year. Are you nervous, excited?

JQ: We worked really hard on this thing, and we’re really proud of it. So just the fact it’s getting any kind of buzz, you can’t beat that.

ME: We were talking about how we all went to school in New York, so there’s something nice about coming back to NYC and being in a film festival. At least for me, this is my first time being in any film festival.

ME: Yea, it’s just nice to be back in the city.

JQ: Most of the people involved in the movie went to NYU at a certain point in their lives. I went slightly after Jeff (Chan), Maya and Andrew (Rhymer) but we all, it’s just been really cool to come back to the city and be able to celebrate this with like a lot of people we went to college with.

JS: That must feel great! I saw the film and you two are absolutely adorable together, I just wanted to say.

JS: Did you guys know each other prior to filming or was this your first-time meeting?

ME: This was actually our first time meeting, but we strangely lead parallel lives. Both Jack and I went to the same elementary, middle school, college; but at different times in our lives and we luckily got to rehearse for two weeks before we started filming the movie so that was a great way for us to get to know each other and instill the dynamic that naturally, I think, made its way into the film.

JQ: Absolutely! Shout out to Lily! Yeah, it was really nice just to have that time to rehearse almost every scene in the movie because we really got to nail our dynamic down. We improvised some of the lines that made it into the final film. But it was just really nice too when we actually started filming it, we didn’t have to worry about, ok who are these people and what is their dynamic? We can just play and have fun

JS: Where did you guys draw inspiration for your characters from?

JQ: Well, with mine, I don’t know. I used to be, when I was like a teenager and had a high school or middle school relationship I would kind of, I would have this thing of being like she’s the one, she’s so perfect. And that’s kind of what Ben’s (Jack’s character in the film) whole philosophy is, especially at the beginning of the movie. And he quickly realizes that that’s just crazy pressure to put onto another human being and it’s not realistic. Life’s isn’t a Disney movie. So, a lot of that. Yeah, that was a big inspiration for my character.

ME: Yeah, I mean it’s interesting because the two writers and directors I’m close friends with them. And as we were filming, I was starting to notice that a lot of my lines felt like they were just straight out of Jeff Chan’s mouth. And since I know his cadence and the way he speaks with everything it just naturally merged into my being and I became this trash goblin, an agglomeration of Jeff Chan and myself.  I also think that you see Alice (Maya’s character in the film) at the beginning of the movie starts from a really low place and a point of a breakup and that was easy for me to act just because I’ve been there so many times. And you know being able to be as messy and belligerent and drunk as Alice is in this movie was a really liberating feeling. I didn’t have to be poised in any way which allowed for me to act with a lot of emotion that felt natural to me.

JS: Now Jack, is this your first time working with Jeff Chan and Andrew Rhymer?

JQ: First time, and I mean it was great. We kind of all went to NYU at different times but I had met Jeff and I think Andrew at an after party for a sketch show I did in college, so it was cool to actually get to work with them on something. But these guys have been close together for a while, but they were so welcoming to me. And it just felt like a real team, a real family by the end of it.

JS: And Maya, you work with Jeff Chan on your show now, PEN15 is that correct?

ME: Yeah, both Jeff and Andrew Rhymer wrote a script for us on the first season of PEN15.

JS: It looks like you guys all had a blast while filming, supporting cast included. Was it a lot of fun on set, or was it more business?

BOTH: So much fun!

JQ: And yea shout out to the supporting cast for a second. Everyone on it was so incredible. Getting to work with Ed Bagley Jr was like a dream for me (Shouts out supporting cast).

ME: And also, because a lot of the crew, a lot of the cast are all part of the same friend group, that can sometimes be a con because you can be so close that it blurs the boundaries and it gets complicated and tense easily. But with this group, it was just so much fun! And everyone was on the same page, really just passionate about the story we were telling. (JQ: YES!) So, it was a really easy working relationship. And I think the rehearsal process was what made the actual filming a blast because we worked through so many kinks during that rehearsal process, and really broke down the script and whatever holes there were, so once we were filming it was just play.

JQ: Yeah, play and so much fun!

JS: I hear a lot of stories about what happens on movie sets, what was the funniest thing that happened while you filmed?

JQ: Well, there was a moment where Maya and I had to film a scene in a pool where the other guests from the wedding jump in the pool with their clothes on. That pool was freezing! The steam coming off it in the movie is because it's only slightly warmer than the frigid air around us. I remember Maya and I both periodically going to the other side of the pool so we could uh, pee ourselves so that it would be a little bit warmer for a second and then swimming back. Let me say, not at the same time, that made it seem like we went together. We took turns, we made sure the chlorine did its job before we came back. Haha!

JS: I’m glad you clarified that! Haha! I really enjoyed the film; I’m rooting for you guys tomorrow! Wishing you all the luck in the world!

JS: It premiers in theatres when?

(PLUS ONE went on to win the Audience Award for Narrative at the Tribeca Film Festival the next day!)

PLUS ONE premieres June 14th guys! Go check it out! That’s all for now but as always comment below and until next time, keep on geekin’ on my friends!