Hey, friends.  Barbarella here.  As we approach the end of another year, I can’t help but think about all the incredibly talented and amazingly cool people with whom I’ve had the opportunity to speak throughout the year.  It’s no small thing that Patrick Muldoon is among my favorite interviews.  While speaking with him about his latest film, DEADLOCK, he strikes me as the kind of guy with whom I’d have a blast checking out some of the exceptional live music here in Austin.

At any rate, Patrick stars alongside Bruce Willis in DEADLOCK, a film about a guy who seizes a hydro-electric damn in order to get revenge.  It’s a different kind of role for the DIE HARD star, but it’s my favorite of his in quite some time.  The movie will be in theaters, on demand and digital December 3, 2021.  It’s a super fun flick to watch, but you definitely have to suspend some disbelief.

Check out my conversation with Patrick.

“I wish we would've jammed on set, now that you say that, but that didn't happen.  No, I just did acting with Bruce on set, which was good enough for me.  It was a super-cool experience working with one of your movie star idols from the beginning.  I was pinching myself.  What a kind guy.  Also, working with somebody like that, you learn.  What a great guy and what a great character he's playing in this.“

Yeah.  It was weird seeing him in that role, but I really enjoyed it.

“Yeah.  It’s a little bit of a reversal of the DIE HARD stuff.  His character is crazy.” 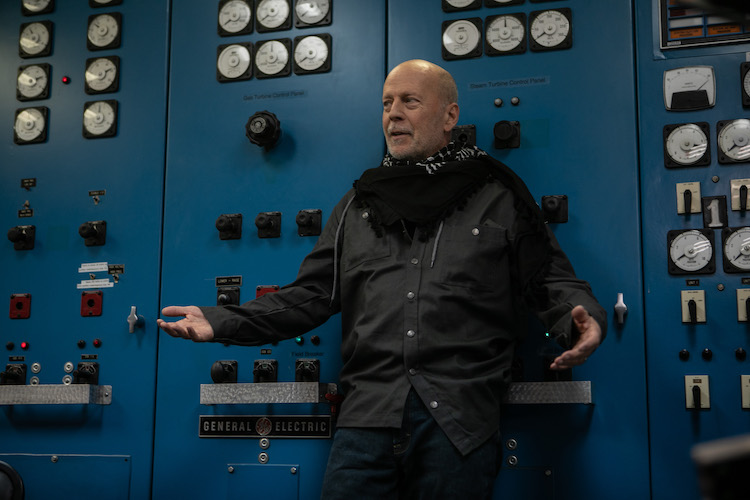 You do a lot of climbing around.  You're going up and down stairs, and you're scaling poles and stuff.  You had a stunt double, yes?  How much of that was you?

"Yeah.  Bobby Laenen was the stunt coordinator who had a bad wig that looked like me, right?  I've been in martial arts my whole life, so all the fighting stuff [was me].  It’s like a 12-year-old boy getting to play war, and you have a whole cast and crew to support you to do that.  Running around with guns and killing bad guys is really fun.  But Bobby, there were times where he's like, "Okay.  I'm going to put you on a cable, and we're going to take you down five stories."  I go, "No, no.  You’re going; I'm not.  Heights?  No, thank you."  So, there's some real dangerous stuff that goes on in the movie, and that is Bobby, not me.

“We had this great set.  There was an old part of the electrical plant that was abandoned from the 1920’s.  We found that place the last minute, and it really gives character to the film because it's huge.  We had all these fight scenes, and we had to plan the fights on what we found that day.  Like, "Wouldn't it be cool if I jumped off the ladder and hit you in the face?"  We were planning it on the fly.  There was a lot of this movie that was on the fly.  Hopefully that kind of spontaneity, the audience will feel because it was fun finding that stuff.  And we had that dam, which was a working dam, and that's kind of the ticking time bomb, and they actually opened the dam for us, and we filmed it.  Those shots are live shots [so you could see] the power of what's at stake with that hydro-electrical plant, which was crazy.” 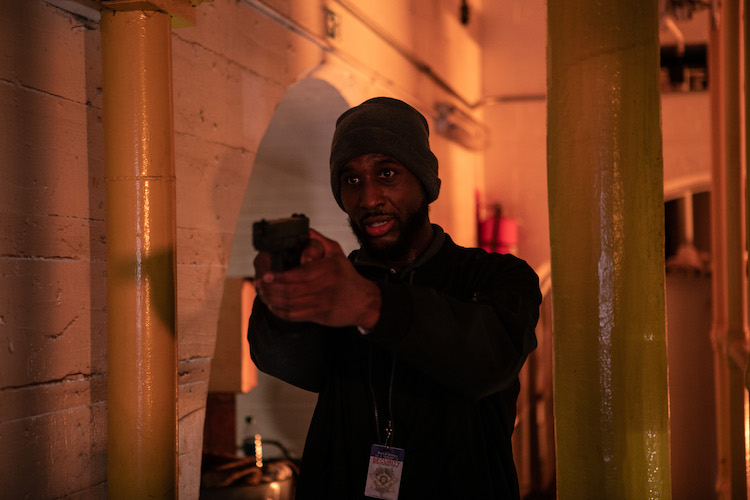 Yeah.  That's insane.  I love your character, Mack, in this.  I love the going-to-work-hungover bit because we've all been there, right?  But, what aspect of Mack did you find the most interesting to explore?

“That, that, and I'm glad you picked up on that because in any action movie there's an ex-military guy who usually has PTSD and is an alcoholic.  And sure, Mack's an alcoholic, but he seems to enjoy it still, and he's just a lover of a guy, right?  He doesn't want to kill anybody.  We get on board with him because, like you said, everybody's been hungover and had to go to work, and it's horrible, and he has some crackhead at the end of his boat who borrows money from him, so [you see] Mack's got a heart and that versus what is about to happen to him, hopefully, adds to some humor that comes across.  He's very like, "Sorry dude, got a town I got to save."  And just the really Southern drawl with all this bad stuff happening, hopefully, that makes it fun for the audience, because he's a slacker forced in this really bad situation, this really bad day.”

But he's still a badass in this.  What’s the most badass thing you've done personally?

“Are you a Longhorns fan?”

“We're crying too.  Only because you're a Longhorns fan, am I going to tell you the most badass thing I did was play for the Trojans, right?  If I played for the Longhorns, I wouldn't be saying that.” 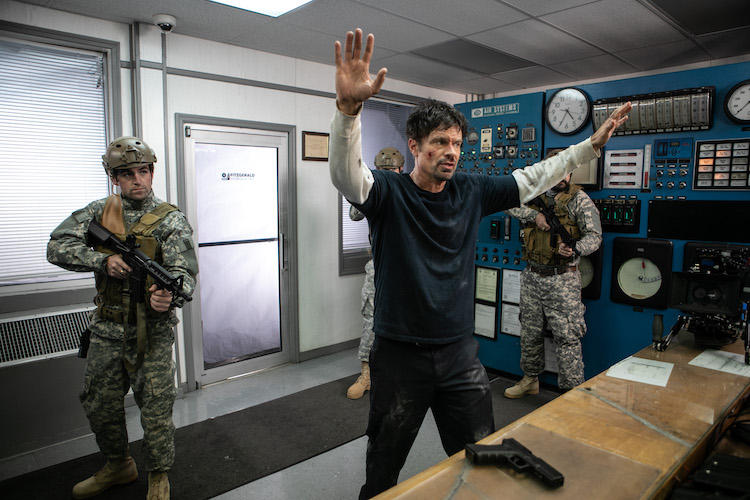 Awwww. (Laughing)  What was the most memorable day on set and why?

“Of course, meeting Bruce Willis, the man.  You want to really be on your game when you act with an icon like that, so obviously, there was a lot of terror and all my preparation.  Then you get there, and the disarming thing about him is he's very kind.  But the cool thing, opposed to how I imagined it, it was not like, "I'm Bruce Willis."  It was, “Action.”  We were in the scene.  He comes to play, and you better be on your game.  Thank God I was.  That was memorable because he's so present, which allows you to be present.  You know?  The good guy and the bad guy have some stuff to work out, but those scenes, when you get through with them, you're like, "Wow.  What just happened?"  It was very, very cool and memorable.”

When everything was shut down during the pandemic, how did you spend your time?

“Oh.  A big thing that I did was, we were supposed to shoot this movie in September of 2020, just when things were getting back, and Jared Cohn, our director called me.  He goes, "I don't want you actors skinny.  I want Mack to have some muscle and not actor-ish, no tanning bed stuff.  I want you to put on some weight and lift,” which was a treat.  When you hear someone tell you, "Gain some weight for work, lots of weight," I'm like, "No problem."  Anyway, so I started lifting, and we were about three weeks out, and then they pushed to October, so I continued lifting, and then it got pushed to November, then it got pushed to February, so what I did in the pandemic [was] I lifted weights for this movie.  I started off like we all did.  Halfway through the pandemic, I was just fat, so I had to get in shape for this movie during the pandemic, which was fun.

How do you motivate yourself to work out?

“Well, if you have a job, you don't want to look bad with people filming you and knowing that it's going to be seen.  It's vanity, right?  And Mack should be a tough guy.  He shouldn't be a weakling, so I wanted do it for Mack.  And anyway, from when I started, I did well.  If we had another six months, I would've been bigger.”

Personally, I’m glad he didn’t have another six months, because if Mack were much bulkier, I’m not sure he would have been as believable.   If you want to check out Patrick Muldoon as Mack and Bruce Willis as Ron in DEADLOCK, the movie will be in theaters, on demand and digital December 3, 2021.

And Patrick, if you’re ever in Austin and want to check out some live music, hit me up.  I’m always game for hanging out with cool people.  I won’t even bring up that time we beat you for the National Championship.  ;-)