Other Worlds Film Festival ‘19: Annette Falls Down the SPIRAL! 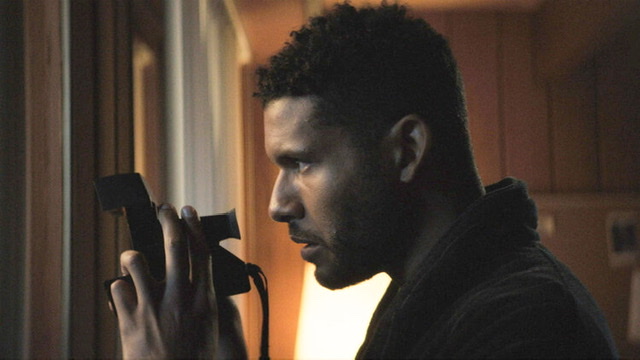 After all the great stuff I saw at the Other Worlds Austin Film Festival last year, I was definitely looking forward to diving into the the 6th year of Austin’s lesser-known celebration of genre film. My opening night outing of the super laid back fest was Kurtis David Harder‘s horror/thriller SPIRAL.

The story revolves around Aaron and Malik, a same sex couple who have a 16 year old daughter, Kayla. While this basic narrative doesn’t exactly seem earth shattering today, SPIRAL is set in 1995 when “My Two Dads” still usually referred to some wacky hetero situation. When the family decides to give up big city life for the anonymous sprawl of suburbia, their acceptance by the locals seems too good to be true. As the only member of the family who remains unconvinced, Malik keeps happening upon bizarre behavior and signs of something amiss all around him. When his demeanor goes from dubious to downright unhinged, it becomes unclear whether Malik’s suspicions are justified or not. Is Malik experiencing a mental break or are the new neighbors really hiding a dark secret?

At first I was worried that SPIRAL was going to fall into B-level territory, but I was pleasantly surprised to discover an A+ effort as soon as all the first act details were established and the second act kicked gear. Harder does a great job building the tension and madness of the gradually crescendoing narrative. While SPIRAL definitely utilizes your typical manipulation like jump scares and false starts, Harder pulls off these hallmarks in a stylized manner. While such devices may be annoying in some instances, the subtle (and sometimes not-so-subtle) creepiness helps maintain a solid level of uneasiness throughout the film without feeling too forced. By the time the story reached its surreal climax, all of these earlier elements fall mostly into place with an oddly satisfying conclusion. I’d love to say more, but I would hate to ruin such an original twist on social commentary.

As Aaron, the more stable partner in the relationship, Ari Cohen is a perfect fit for the loving father trying to live the white picket fence life. Though his character isn’t the one who gets to experience much mania in the couple’s current circumstances, Cohen’s sincere performance definitely helps balance the craziness of the hair raising story.

Jennifer LaPorte totally nails the mid-90s teenage angst with her portrayal of the freshly transplanted daughter Kayla. Her love for her two dads comes through in every scene, but not without the trauma that comes along with all the changes going on in her hormone fueled life. Despite all of these trappings, LaPorte’s take on the adolescent feels as real as it gets without coming off as bratty.

The star of the film is undoubtedly Jeffrey Bowyer-Chapman as the troubled Malik. Bowyer-Chapman perfectly distills Malik’s transition from a loving stay-at-home husband/writer into a paranoid conspiracy theorist. Early in the film I feared that Malik might be relegated to former party monster territory, but I was thrilled as Bowyer-Chapman’s astonishing performance unfolded. Wow you guys.

Overall I was delighted by the surprising SPIRAL. While the film fits firmly in the horror genre, Harder manages to tell a well-balanced story within a fresh context without getting bogged down with preachiness. I’m not sure when SPIRAL will be released, but definitely keep your eyes open for this refreshingly original tale.