ONWARD is upward for Pixar!!! 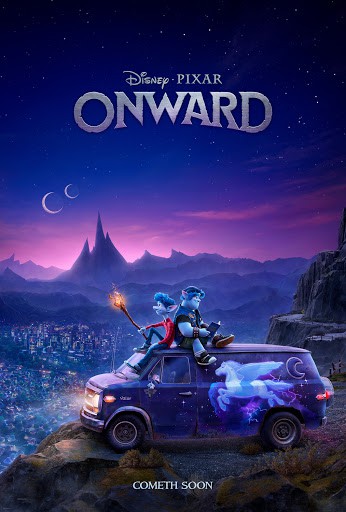 Hey folks, Harry here...  Today was a very intense day for me, I woke up to Fathergeek having fallen in my living room and I had to help him, from my wheelchair to the couch.  He rested for about an hour on the couch, before waking up and wanting to do something, so we went to a movie.  Something we've done countless times in my life... but it is obvious to me that Dad is slowing down.  He's 75 now and that's a helluva lot of years on Planet Earth.  I can't imagine the planet without him - and I can't imagine movies without him.   He is the king of my universe.   And always shall be.

The film we chose was Pixar's new film by Dan Scanlon, ONWARD - Since Disney and Pixar kicked John Lassiter for giving employees HUGS, I've been a bit pissy about Pixar.  We currently live in a world where showing affection for people is considered a sex crime.  Hugs have become EVIL.   I know this, because I too, have become targeted by such actions.  Even if I hugged someone from the height of a wheelchair and did not anticipate the big ass being where I thought a back would be.  I regret it.   I battled with it being wrong for a long time.   I went to therapy mainly because the sheer amount of hatred thrown my way, had me contemplating final solutions that I sought help for. 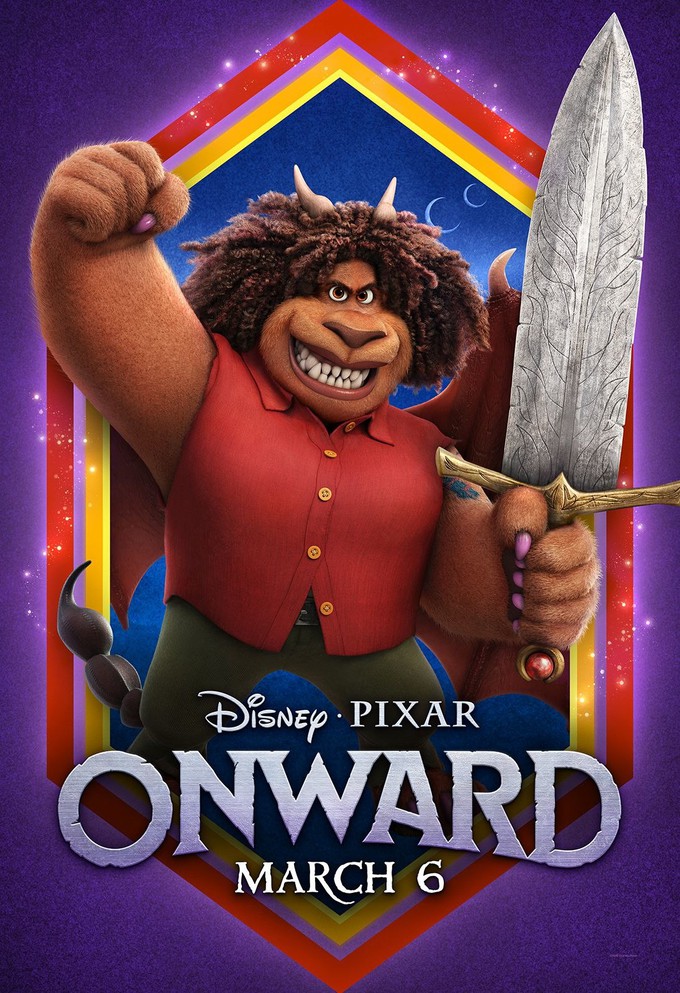 Therapist and Lawyers both sought for me to return to AICN over 2 & a half years ago, but I felt so destroyed by the experience that I no longer wanted to even write about film.  It crippled me beyond my affliction that put me in a wheelchair.  I thank my sister and those that came to keep AICN alive - and it was only at the behest of folks writing me, begging me to come back to the site... that I did so.

In truth, I missed it desperately.  My therapist felt that the best thing I could do was to return.  That writing to you people was my purpose in life.  That my love of cinema had to be shared.  I did not agree. 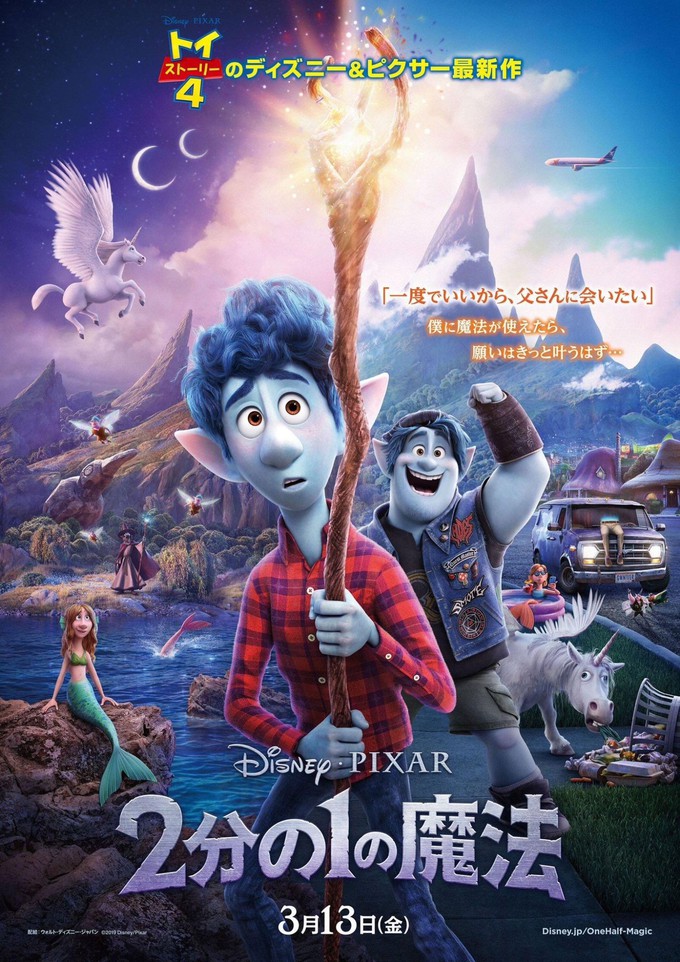 I pouted like a baby.  I was frozen by insecurities and doubts.  Then Kirk Douglas died and I couldn't stop myself.  My grief for such a giant of film was too much and once I wrote about him, the floodgates broke open and I couldn't hold back from writing.  I'm not like most film writers.  They tend to write about film from the stand point of finding flaw with cinema.   Looking down upon film as though is wasn't worthy.

I go to film explicitly to discover what the director has in store for me.  To defy my expectations and show me something.. different. 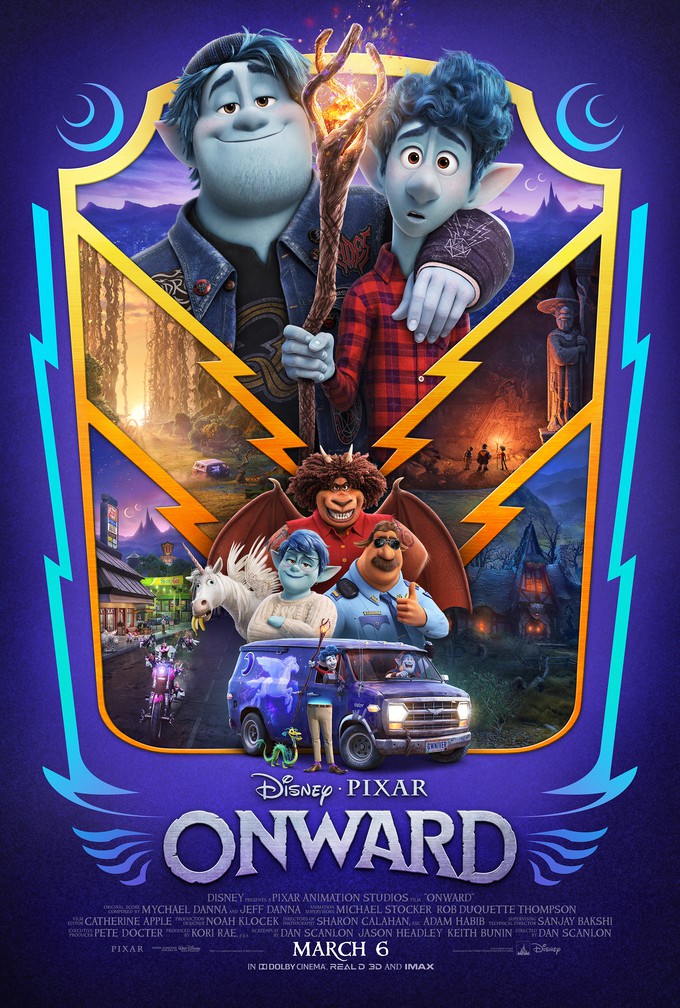 Finding my father laid out on the floor today was like a stake in my heart.  His head was exactly where my dearly deceased dog, ROMMEL, was found dead about 7 years ago.  Now Dad was alive, exasperated, but in a bit of a panic.   He had his eyes shut tight and didn't seem to have a clue how to get up.  As someone that has fallen more than once in the living room of my house - I knew exactly how to safely handle the situation - and within about 10 minutes, I had him sitting on the couch and resting.

When we got to the theater, I fetched him a drink and we cilled for the 30 minutes of time we had before the movie started.  The theater was basically empty - and he used my chair as his walker.

So let's get to the movie...   ONWARD - a film about a Pixar created FANTASY world that developed Technology and forgot their whimsy and magic.  I didn't really know the film was a quest for the top half of the main characters' father...  and that the only functioning part of their father was his legs - the part of my father that seems to be... failing him. 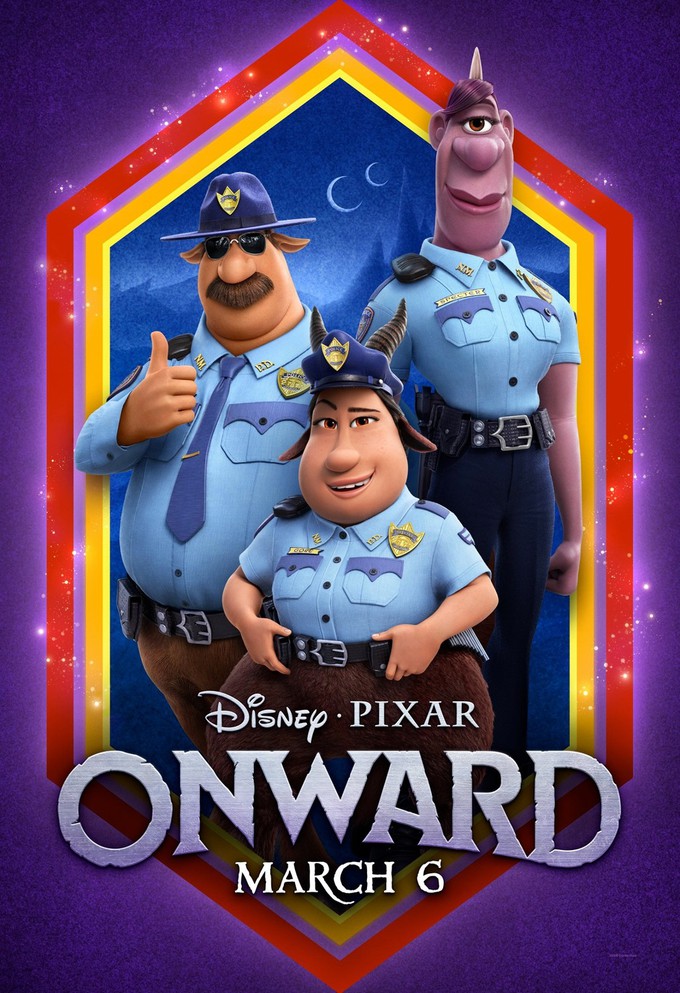 The film opens with this big... fantasy shot of the ONWARD world from long ago when magic was everywhere - and it quickly shows how Technology replaced the studious realms of magical learning - because suddenly you didn't need to know how to hold a magical staff, how to think about fire and light, all while doing the proper incantation and believing in it - to get light, when science allowed for a simple turn of a switch to light a domicile without the danger of fire or the magic going astray.

Once electricity swept the world of ONWARD - everything became mechanical, faeries stopped flying and took planes.  Tech replaced Magic - and while the world was still populated by the fantastic, they themselves became more... mundane. 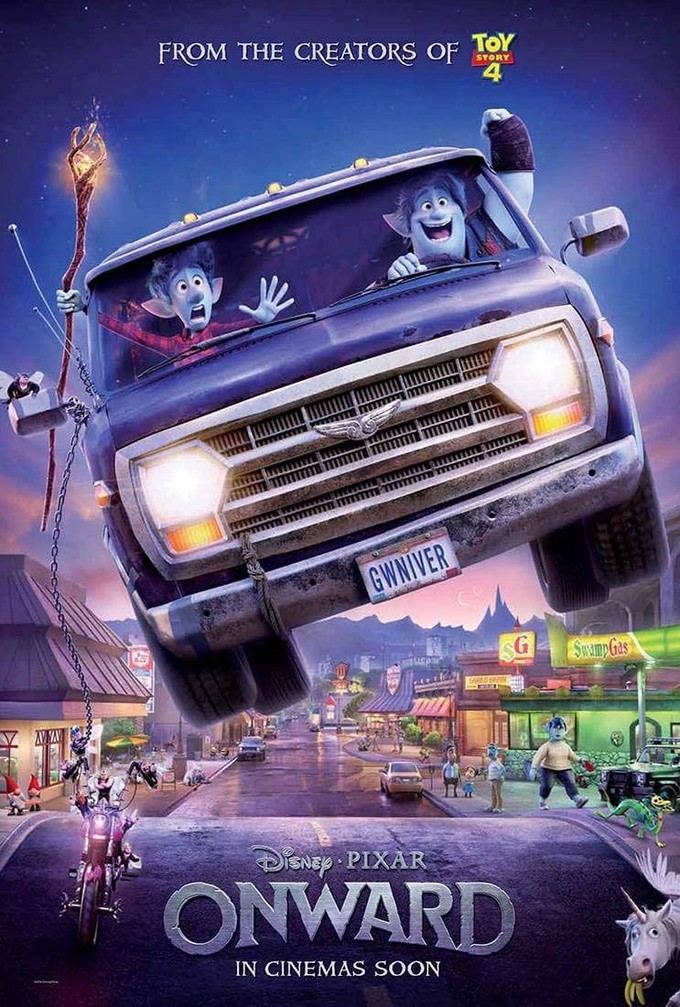 We begin the jist of the story with Tom Holland's IAN LIGHTFOOT and his mother, played by the fantastic Julia Louis-Dreyfus - celebrating his 16th Birthday and his arrival to Mandom.  Now he doesn't have his dad, nor Charles Bronson, to welcome him to this momentous moment of life, but he does have his brother, Barley Lightfoot played by Chris Pratt - a character that is ate up with the legends of old - and this fantasyverse's version of DnD that is allegedly historically based - and proves to be fairly accurate about a great number of things.

Ian is a bit embarrassed by his fantasy nerd older brother.   However, after a series of events - he ends up with his father's magical staff and a spell that will allegedly bring him back to life for 24 hours.  Barley attempts the spell to no success, but Ian later tries and ends up with a Father below the waist.  His brother and he goes on a game quest to get another magic stone for the staff to complete his father's 24 hour existence.

That's the plot.  Find the magic stone to bring your Dad back to life to spend time, but because his butt, crotch, legs and feet are already here, the clock is ticking - and they have until SUNRISE to complete the quest. 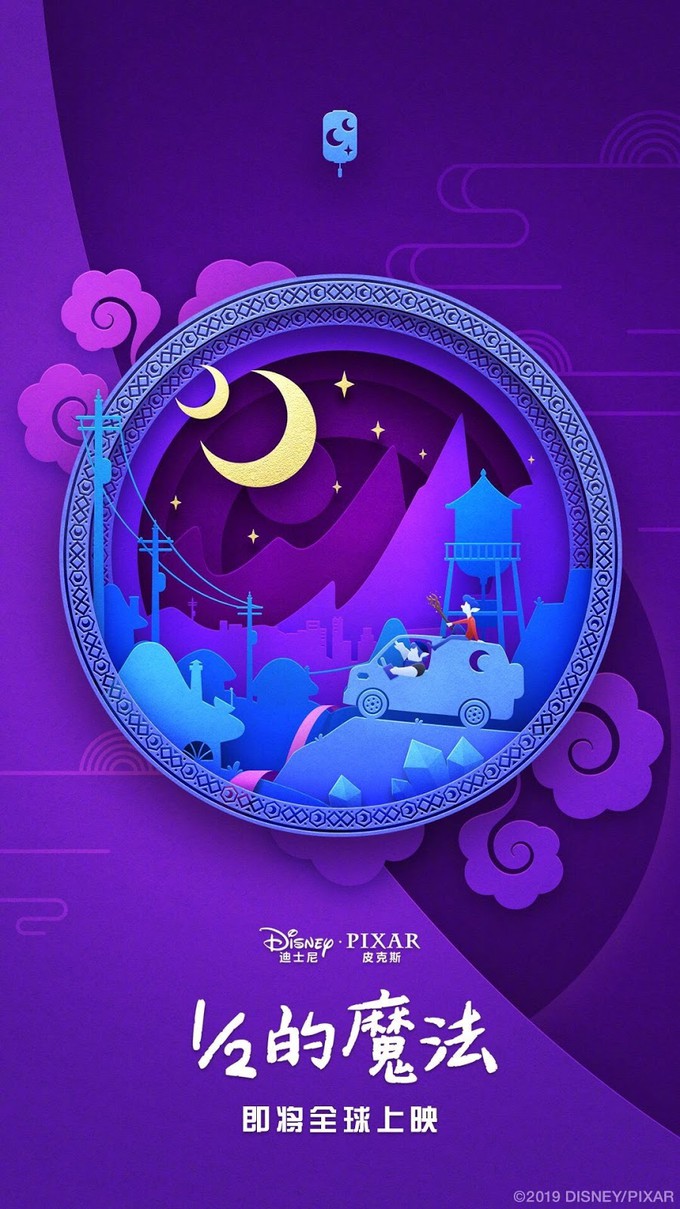 Now, I have no desire to spell out everything that happens from here on out, but suffice to say... the notion of spending extra minutes/hours/day with my Dad was incredibly powerful for me.  I saw Dad reacting in fashion.  The film is easily the most stoner thing that PIXAR has ever created.  The quest is easily better than the last script I read for the DUNGEONS & DRAGONS movie that is in development.

Amongst my favorite aspects of the movie are all the little Easter Eggs of Fantasy Present Product Tie-ins.   Tracey Ullman's Pawn Shop character is absolutely wild.  The convenience store products hilarious.  The Fairy Bikers...  so cool.   The Centaur Cop love interest of the main characters' mother - classic.

Even how they handled the ending, the character's realization of the worth his brother had provided  for him.   All of it, just feels remarkable.I was not fond of Dan Scanlon's MONSTERS UNIVERSITY.  In fact, I feel PIXAR should never ever do another sequel ever again.  Originality is what they do best.   It has the wonder of discovery - and that is better than any continuing formulaic story-telling.

Upon coming home with Dad - we watched more of MR MERCEDES' 2nd Season and 21 BRIDGES.   Watching film with family is the most precious thing we have in life.  I hope you and yours have a great time with ONWARD...  it is all the more precious with those you love. 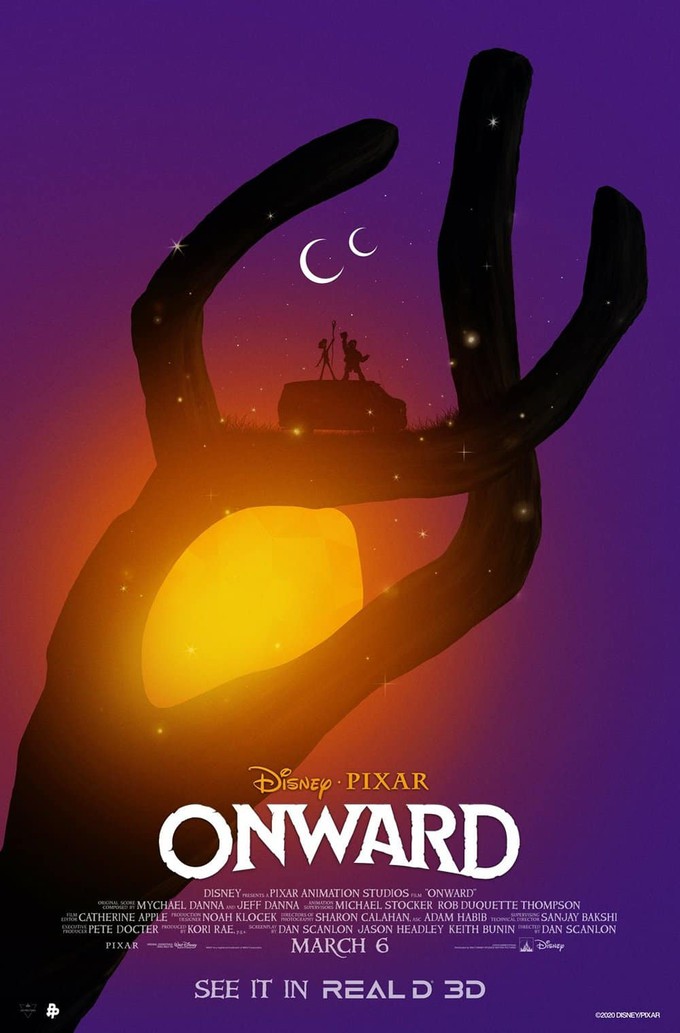