Michael Paré talks “ONCE UPON A TIME IN DEADWOOD” + Ninja Cheerleaders with Prometheus! 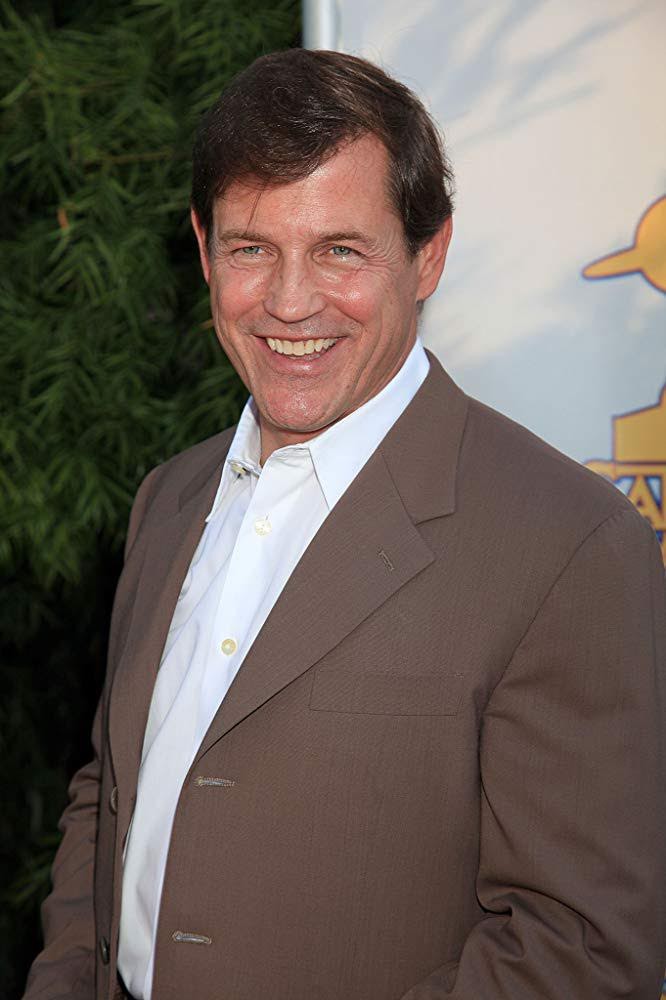 “Once Upon a Time in Deadwood” is a western starring Michael Paré, Robert Bronzi, Lauren Compton, and Karin Brauns. It was written and directed by Rene Perez, who is no stranger to the genre. It’s available now on VOD, and I had a chance to speak with the main antagonist of the film, Michael Paré! You can check out the poster, trailer, and our conversation below! 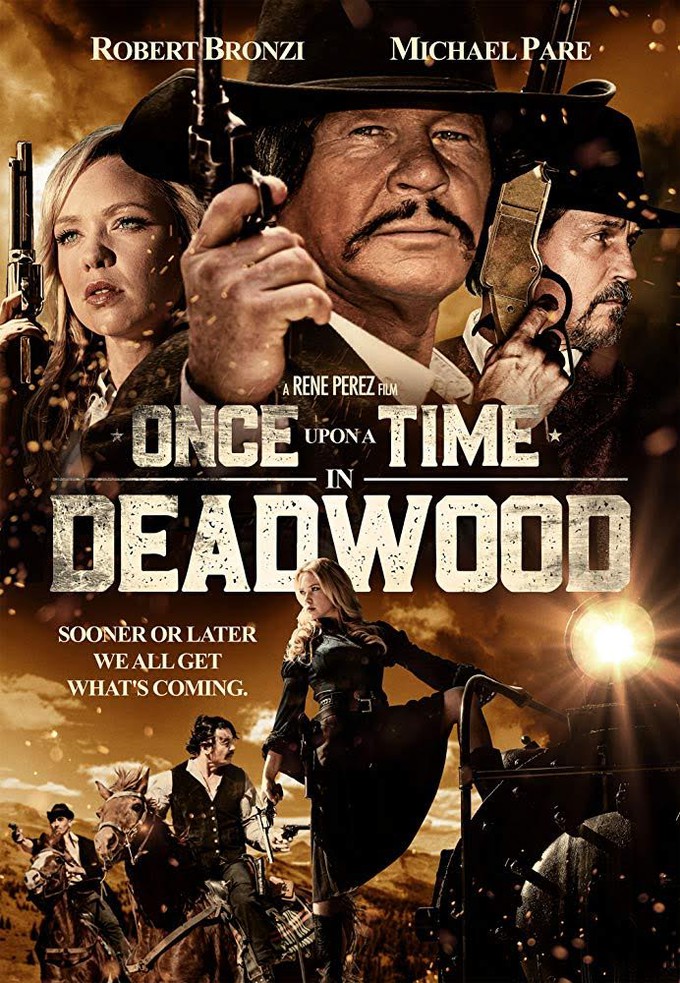 JS: Hi, Michael. Thanks for the phone call!

MP: No, problem. You’re in Massachusetts?

JS: Oh yeah! Starting to get a little cooler out. How are you doing?

MP: I’m doing good! It’s been a good year, and it’s very nice here in California. I’ve got a few movies coming out. So, what more can an actor ask, right?

JS: Right! I wanted to talk to you about “Once Upon Deadwood.” You play the villain, what can you tell me about it without spoiling it?

MP: Well, it’s my town right, and this guy is going to disrupt everything. I run the booze, I run the gambling, I run the women and here’s this guy, this good guy comes riding into town, and he’s going to straighten shit out. And that’s always a problem for the bad guy, right?

JS: It was directed by Rene Perez, who I understand also came up with the story, and Jeff Miller did the screenplay?

MP: Yeah. You know it’s a classic western story, so it’s not like you’re creating a new genre.

JS: Right. Are you a fan of the genre?

MP: Of Westerns? Yeah, I’ve done a few, and they’re always fun to make. We’ve been playing cowboys and Indians and war and detective stuff since we were little kids, I think. I mean, me and my friends were.

JS: Do you like playing the bad guy, or do you prefer to be the hero?

MP: Well, you know, the hero is defined by society, right?

MP: So, it’s always a fun exercise to find compassion for the antagonist.

MP: But bad guys, it’s very hard to define them anymore. I’m just taking care of business out there in the old west, and these women would’ve starved or been captured by Native Americans, or who knows. There are only certain things that they can do when it comes to survival.

JS: Now, obviously you can’t go to the wild west for a quick character study, what did you do for inspiration?

MP: I’ve been watching cowboys, John Wayne, Clint Eastwood. You know, all the classic westerns. It’s a period just before the industrial age. It’s before cars and the internal combustion engine. Humanity, the human race, was about to burst forth. You gotta remember shortly after the civil war, what was it, forty years after the civil war we were flying. Sixty years later, we were on the moon. So, it was like a very exciting time in history.

JS: So how did you get involved with “Once Upon A Time In Deadwood?”

MP: Jeff Miller called me up, and he said, “Michael, I know you’ve done a couple of westerns would you like to do one up in Central America?” And I said, “Send me the script, man.” And he did. It was pretty straightforward. It’s got a nice twist in the end. They told me that they were going to use practical effects. Meaning they were going to use guns with blanks, and they were going to use squibs for the bloody end. And that’s always. It just makes it more fun to make a movie that way. I know with CGI that they might be able to make it more realistic, but you know its fun with blanks and squibs!

JS: Yeah, and it gives it that western feel. I don’t want to watch a lot of CGI when I watch a western. I want what you said, blanks and squibs.

MP: Yeah, even though a technologist would tell you that when you get shot no blood comes out the front, it comes out the back but classically when you watch a western the guy gets shot, blood spurts out all over the fu*ken place and it then it drains out when he’s on the ground dying.

JS: Yup, exactly. (Laughing.) It doesn’t matter if it’s realistic, that’s what we want in our westerns.

MP: Yeah, exactly. I only wish… I didn’t get to ride a horse, but I had a saloon, I had a girl in jail, a beautiful girl, Lauren Compton who does a lot of a comedy, so it was a lot of fun working with her.

JS: I was going to ask what it was like working with her.

MP: She’s very funny! You really have to fall into character moments before the scene. It’s good to go in and out in a western because they’re all bigger than life characters. It was cold, and it was rainy, there was snow. There were pretty harsh conditions, so it’s good to keep it light.

JS: Some of the locations were gorgeous, where was it filmed?

MP: They used me in a western town of central California near the Sequoia National Park.

MP: Yeah. Rene (Perez) is really good at that. I know they shot some of it in Spain. I wish they had taken me to Spain. One of the scenes is where they shot “Once Upon a Time in America.”

JS: I didn’t realize that.

MP: Yeah, I like working with Rene a lot. I’d like to see what he would do if he had, like 5 million bucks. He’s a cinematographer director, and in a western, that’s really perfect because it’s really all about the shot. You hire the right people, and when they talk, you believe them, and the rest is just-style.

JS: I saw that he was the cinematographer and director, and that’s cool because you get the vision from his head.

MP: Exactly. You don’t have to ask him why he wanted it this way, and it’s because it looks better. It’s got to be appealing to the eye. Westerns are a lot like graphic novels.

MP: If I were to do a storybook of a western, I would get a comic book artist.

JS: You’ve been in so much stuff since I was a kid. Everyone always brings up “Eddie and the Cruisers.” I remember you from “Streets of Fire,” but what was your favorite roll?

MP: Well, you know, there’s different things that I liked. “Eddie” was my first movie. I was young in my 20’s. “Streets of Fire” was a big studio movie, and it was like a full-on sci-fi western.

JS: It was a very strange movie. I loved it. (Laughing.)

MP: Yeah. The “Philadelphia Experiment” and the werewolf movie I did (“Bad Moon”), “200 Feet.” “Village of the Dammed.” Working with John Carpenter was great. I did a movie where Rod Steiger played my dad (“A Month of Sundays”). The scenes with Rod Steiger will always be one of my favorite parts of my movie history. My favorite? I don’t know. The posters I have up in my house are “Streets of Fire” and “Eddie and the Cruisers.”

JS: I would have guessed “Ninja Cheerleaders.” (MP+JS laughing.) 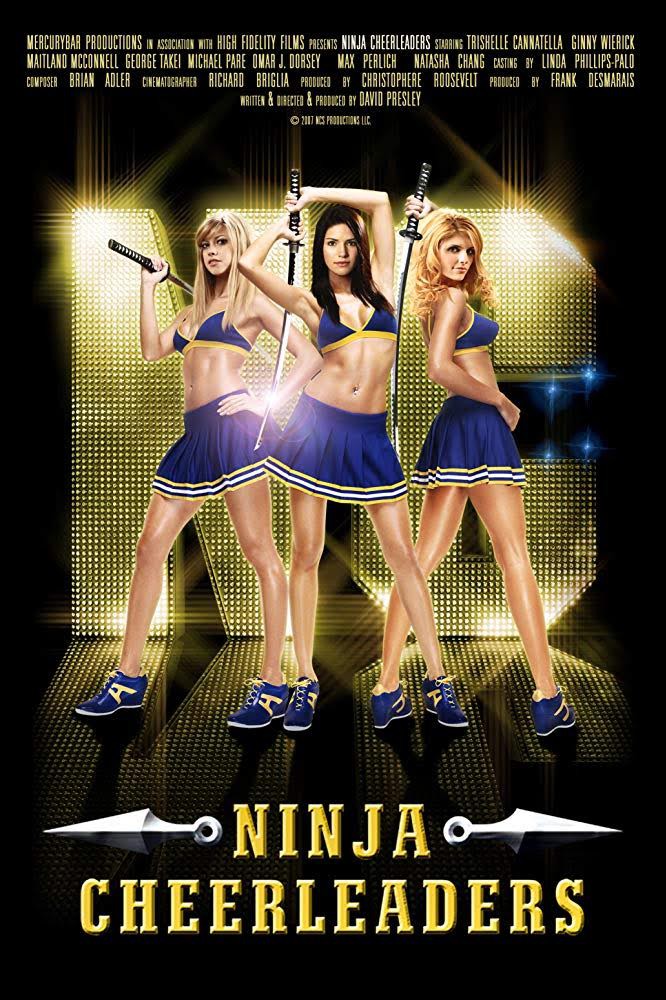 JS: For the ninjas, of course.

MP: Yeah, the Ninjas. Can’t beat that! Or what was the other one? “Kinky Killers!” (AKA “Polycarp”) How about that one? (MP+JS laughing)

JS: I’m going to have to look that one up! (Laughing.) 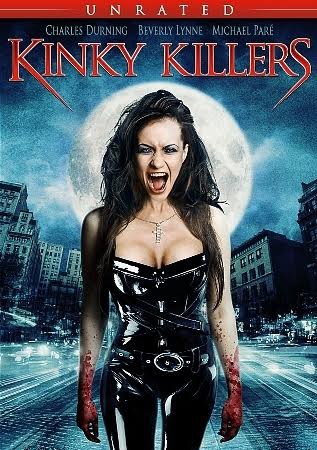 MP: But I’ll tell ya, I did “Kinky Killers.” We shot for five days in Hoboken, NJ, and I worked with this guy Eric Etebari in this scene. I’m playing a cop, and I’m supposed to be pressuring him to tell me about this other bad guy we’re looking for. Of course, the typical thing they write into the script is, “you’re going to go to jail and get raped.” The chief of police, a guy named Tony Falco, was like our technical consultant and I went to him, and I said, “come on, this guy is 6’3”, he’s a fu*ken bull. He’s not going to get raped, what else can I say to him?” He says, “Michael if they’re bringing him in, he’s either on parole or probation. All you got to do is threaten to violate his parole. That means he goes back for his full sentence. None of these guys are heroes. Go in and bang his head off the desk and threaten to violate him” The director let me do it that way. Now cut to maybe three years later. I’m at home, and my phone rings, and its Brad Furman, who directed “Lincoln Lawyer.” He says, “Michael, I’m making this movie “Lincoln Lawyer,” and I want you to be in it.” I said, “how did you get my number, man?” He says, “you worked with a guy on my basketball team, Eric Etebari. So, Eric showed that scene to Brad Furman. The point of the story is that you don’t know. If you give a hundred percent to every opportunity that you get, it’s going to pay off. Either to your heart knowing that you’re not a fake or a phony or, somebody’s going to see it and say, “he’s still got it.”

JS: No, kidding? So, your role in “Kinky Killers” got you “Lincoln Lawyer?”

JS: Who would have thought, right? That’s awesome! So, what’s up next for you, Michael?

MP: I’m going to a town called Caliente, Nevada, to do an Army, Zombie attack movie. All these other zombie movies are about civilians having to deal with the zombies in the neighborhood, village, or city. In this one, the National Guard is going to subdue the zombie attack. It’s a different twist on the zombie genre, which is never-ending it seems. God Almighty, who would have known “The Walking Dead,” would last fu*ken fifteen years.

MP: Then I’m going up to Fresno. I’m producing a horror film called “Halloween Club” for 2020. It’s really cool because I’ve produced before, but I’ve never gone from conception to post (production). Those two should be done by Thanksgiving.

JS: So, we have a few things to watch for you in, then?

MP: Yeah, I’ve got stuff coming up, and I’ve got Massimiliano Cerchi’s film “Penthouse” coming out. We just finished principal photography, and it's in post (production) now.

JS: I won’t take up all your time Michael, but I do have one last question for you.

JS: If you could sum up “Once Upon a Time in Deadwood” in one sentence, what would it be?

MP: Yeah. A reluctant hero comes face to face with a deadly villain.

JS: I like it! I appreciate your time Michael; it’s been a pleasure! I’ll be looking out for your future projects!

MP: Okay, thanks a lot man! I hope you have a good Autumn up there.

JS: You too, Michael! Thanks again! 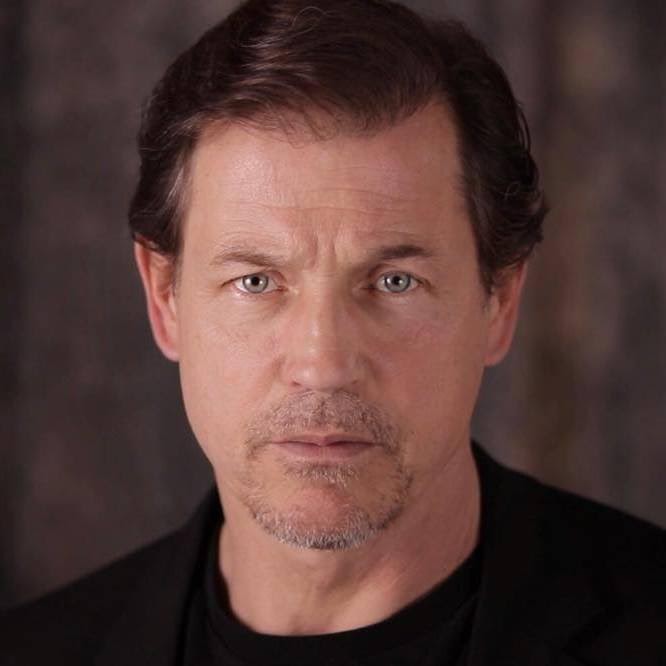 It was great chatting with Michael. He was easy going and very funny! I love the story about he landed his role in "Lincoln Lawyer!" You just never know!

“Once Upon a Time in Deadwood” is out now on VOD! If westerns are your thing, check it out! As always, comment below! That’s it for now, folks! Until next time, keep on geekin’ on, my friends!