The film about a retired Muay Thai fighter (Nick Sasso) who rescues a transgender performer (Nomi Ruiz) and becomes her bodyguard will be available in Theaters, On Demand and Digital on January 29, 2021.

I had an opportunity to speak with Nomi Ruiz and learn a little more about her and her experience working on the film. 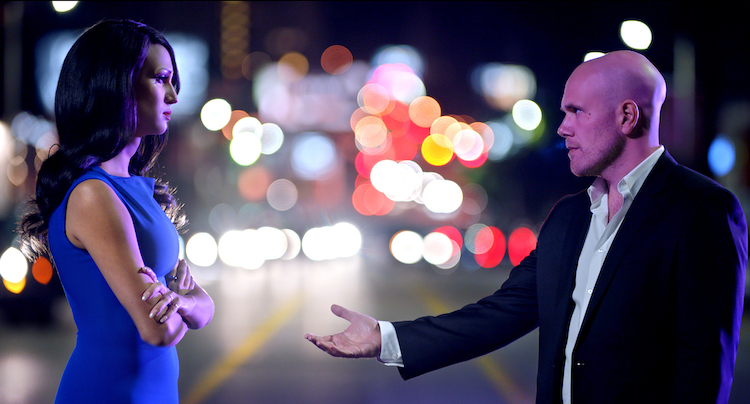 Would you describe the first time that you met Nick Sasso, and what kind of first impression did he make?

“Yes. We met at a restaurant, and he was so passionate. He just, right away, started pitching me the film as soon as I sat down. It was really refreshing and exciting to see his passion behind the project. I was on board right away. I mean, I hadn't even read the script and I was just like, "Okay, this is something I want to be a part of." He got me to be on board as a producer and gave me some creative input, so that was really important for me. He was very passionate about it and I was sold, right away.”

“It was awesome. We had so many insane adventures. It was both of our first times working in this sort of realm, and there were a lot of things you learned the hard way. It was great. We were really being a support system for one another. I think we really developed a great friendship over the course of however long it took to make the film.  It was really fun. Sometimes it was really difficult, and we helped pull each other back up when those things happen. We were both really passionate about the project, so I think we're both proud of the end results.”

“I think I'm very similar in her passion for her career and for, I guess, life in general. And also, I keep saying that she reminds me of me ten years ago, when I was more leading with the lifestyle of being a global artist, and having that egotistical side takeover and mask insecurities. It was interesting to play that and bring that stuff back up and acknowledge that stuff in myself.  To revisit it through this character was really interesting and actually therapeutic, as well. I got to see myself from a different angle.”

HAYMAKER is kind of a love story. What is your favorite love story?

“Ooh. Oh, my God. I love that movie SECRETARY with Maggie Gyllenhaal.  I think that movie's so romantic. I'm like, "This is true love. That's the love I want.””

What's the craziest thing you've done in the name of love?

“Oh, my God. So many. I have moved to different continents. I've gotten married. I've gotten divorced. Yeah, I think moving to Greece was pretty much... It was very dramatic. When you put a Puerto Rican and a Greek together, it's like a soap opera.  That's definitely a story, one for the books.” 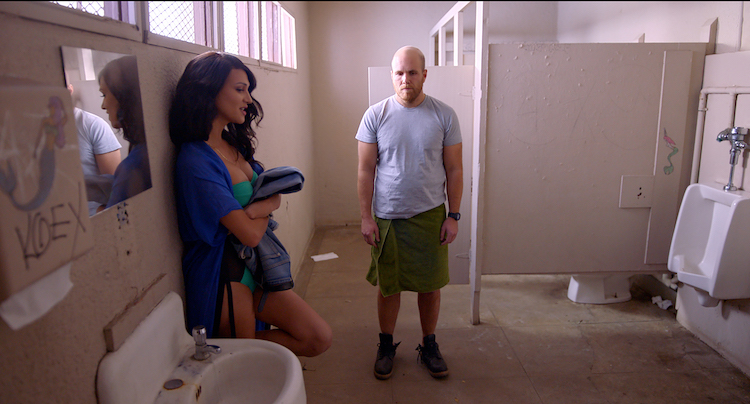 What appeals to you most about acting?

“I love how, like I said, therapeutic it is. It's really interesting to pull all these emotions from your past, or wherever you pull them from. And for me, it was also a little difficult at first because it was my first time acting. And when I was pulling up these triggers and all this emotion, I didn't know how to put it away.

“It's something I was working on with the coach a bit, because we would have a dramatic scene, and then they'd yell, "Cut," and I'd still be in that emotion, and I would take it home with me. I'd have this "Oh, my God, how do I get rid of it?" feeling. After this experience and seeing how people can turn that on and off, I have grown a real respect for actors. It's something that I've learned, I'm still working on, but I've definitely gotten better after HAYMAKER.”

In what areas of your life have you improved the most, over the past five years or so?

“I definitely have become more aware of, I guess, my needs and making sure that they're met, as opposed to fulfilling everyone else's initially. I didn't realize, for so long, I just ignored a lot of aspects of myself and didn't maybe feel deserving of certain things. Subconsciously, I didn't realize that. It's funny, I think the character is the same. I think she also doesn't realize that she deserves love and to be loved; even she's allowed to have that. I think we all, at some point, get to that point where we realize a few of the things that we are worthy of.”

“Yeah, and it attaches itself to different things for different people.”

It's really good that you discovered how to appreciate yourself more.

“Yeah, and stand up for myself. I think that's something I definitely have improved in and I'm proud of.”

Did somebody help you discover that, or did you just figure it out on your own?

“A bit of both. I think relationships always help mirror yourself to you. I think that those are sometimes the moments when you see yourself the most, when you're in it with someone else. I've gone to therapists. I think also after HAYMAKER, I realized there was a lot I still needed to work on when I was pulling up all these emotions, and I'm like, "Oh, my God. This is still in me, all this sensitivity." I thought it was a good opportunity to face those things and evolve.”

Yeah. What would you consider a relationship deal breaker?

“Yeah. I just think when people are not aware of their actions or reactions or their partner's emotions, it's important to step outside yourself and have empathy.”

Do you enjoy watching martial arts?

“I’m a fan of boxing, and for the first time I saw Muay Thai fighting when we were making the film. I went to the Friday night fights.  I love the adrenaline. I like quick sports, just full of action.”

You like being there versus just watching something on TV?

“Being there is definitely much more glamorous. Watching on TV is definitely cool, too. I love a pay-per-view moment. But being there was super, super fun. The energy, the adrenaline, the sweat coming off the stage, it was really, really, really, really cool and really sexy too, just being in the room with the fighters. They're all around, and they're getting ready. I'm like, "Oh, good energy up in here."”

Did you learn any cool self-defense moves while you were on set?

“Oh, my God. I did not.  I was always in a dress or in a heel.  I really was dying to hang out with Zoë Bell a bit more. I was hoping she would give me some pointers to kick ass. We didn't cross that much on set.” 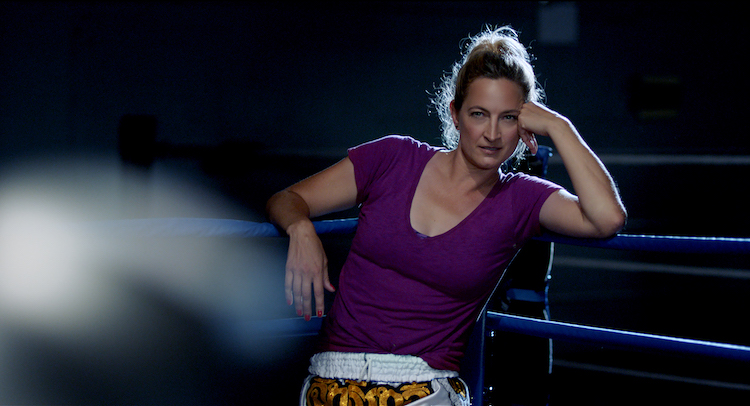 When you were young, how did you imagine yourself as an adult?

“Honestly, I didn't think I'd make it this far. I had all my dreams, I had my goals. I knew music was what I was going to live for and constantly strive for. I never really thought that I was going to be successful at it because I never saw anyone like myself. I never had an influence in that way. And so it was interesting to have to carve my own path and actually then become the woman I thought in my mind. It's been very inspiring.”

Yeah. That's great, and it inspires other people now, too.

“Yeah. That's another takeaway. I've realized the importance of sharing my story, and sharing my personal experiences and narrative through the work that I do. It helps others.”

Absolutely. If you could perform with any artists, living or dead, with whom would you want to perform?

“Oh, my God. Amy Winehouse is one of my tops. I was obsessed. I still am obsessed with her. Sade is another. Maybe Stevie Nicks is one of my songwriter gurus. Kali Uchis – she’s a Columbian artist – I love her.”

What is the scariest situation you've ever found yourself in, and how did you deal with that?

“Well, I did once find myself in an abusive relationship, which is pretty scary. I never thought that would ever happen to me, and it changed my whole perspective on people in them, and how it's this sneak attack from the inside. It's like, "Oh, my God." You slowly realize. You're like, "Oh, wait. What am I doing here? Oh, no."

“That was really a dangerous situation. I always turn to my music when things get really tough, and I just started writing songs on my own and started speaking to myself from my strength. I separated it a bit because I was like, "Okay, I'm so weak right now, but let me speak to myself from the strength within me through my music." That really saved me, and luckily, I have my friends and my family and my fans that have always supported me. I'm a little more privileged in that way, where I got to actually have a place to escape to.” 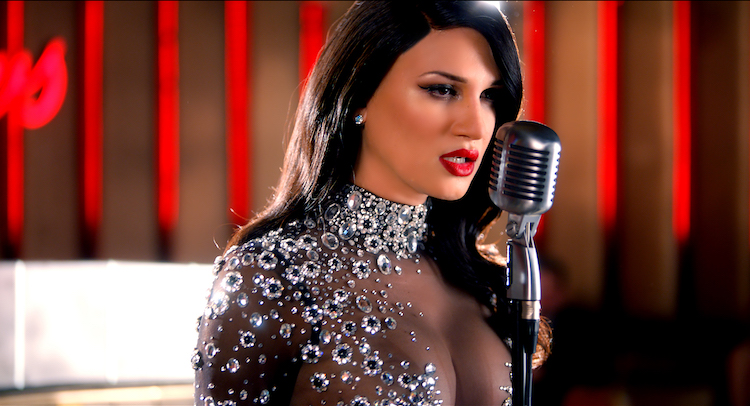 How old were you when you started writing music?

“I was about ten years old. I remember, I was always singing, and I was bullying my mother into doing something about it. I was just like, "Do something. Find me a manager." And she found me someone who wanted to manage me, and it was interesting. I kept telling him, "I don't want to sing covers" because we were working on demos. I wanted to sing original songs. One day, he just said, "So write it." I was like, "I don't know how to write songs." Like, "Just do it." And I grabbed my brother's little keyboard, and I just started writing, and it just came so naturally. It was a great outlet for me, too. Another therapeutic process, which is good to have as a kid.”

Music is wonderful for stuff like that. What song would you say best sums you up?

Do you have a favorite quote?

“From that song? “Tomorrow may never come, tomorrow was made for some.” I love that line. It gets me every time.”

Going forward, in what areas of your life do you want to improve, say in the next five years or so?

“I definitely want to be more disciplined with creating my own work schedule. Now that we're, a lot of times, just locked at home and making our own schedule. I'm like, "Okay. I need to be my own boss a little bit more and get to work at this time." I've been trying. I'm also taking a little drinking detox. I'm trying to have different relationships with all the aspects of my life. I think I've just gotten used to the way things were, and now I want to just be more disciplined in everything in my life.”

If you could only be one, would you rather be super gorgeous or super intelligent?